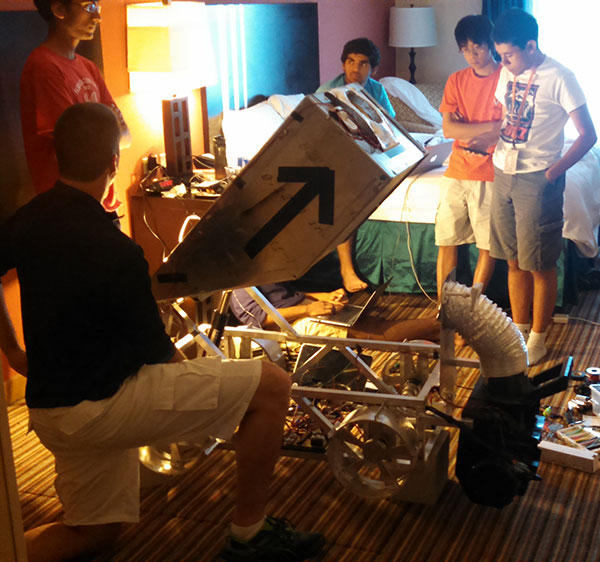 You might say that Ernest “Boots” Mead was the master of extension.

In educational jargon, “extension” is an activity outside the curriculum meant to enhance and broaden students’ learning. A former music professor at the University of Virginia, Mead was renowned for inviting his students to his house for dinner and deep conversation. That eventually led to a fourth-year liberal arts seminar, an informal Socratic forum where he and the students met regularly to discuss topics they had chosen together.

On Saturday – seven months after Mead’s death at age 95, and less than a year after he taught his final seminar ­– students, faculty and alumni again gathered at Alumni Hall to celebrate his legacy at the announcement of this year’s 12 Mead Endowment winners.

Founded in 2002, the endowment provides faculty members who display “outstanding potential to become friends and mentors of students” with $3,000 grants to create their own “dream ideas” – opportunities to inspire students academically while building personal relationships in a setting that the traditional classroom cannot provide.

Among this year’s dozen dreams: training students to use small, unmanned quadcopters to make atmospheric observations – and then letting them keep them (Stephan de Wekker, environmental sciences); a “Sex and Sentiment” book club that will share dinner while comparing 19th-century books read in class with contemporary books with similar themes (Emily Ogden, English); a “Pirates of the Mediterranean” movie-and-dinner series that will examine the depictions of Mediterranean piracy over Mediterranean food (Joshua White, history); plus travel to several curriculum-related performances and competitions.

In the latter category, Gavin Garner, an assistant professor of mechanical and aerospace engineering, will help students participate in a NASA robotics mining competition. The challenge entails seeking ways for astronauts to procure water from extraterrestrial sources.

“Strong evidence suggests that water can be reclaimed from the regolith (pulverized rock dust) ‘soil’ on the surface of the moon, Mars, and asteroids (along with precious elements like gold, platinum, helium-3, and diamonds),” Garner wrote in his grant application. That water could be used not only to keep astronauts alive, but also to be split via electrolysis into hydrogen and oxygen gas and used as rocket propellant for the return trip.

This is where the students come in: NASA sponsors a competition among university students to design a working robot that would harvest tons of regolith.

“While I would love to take some of our students on a trip to the moon as part of my Mead Endowment ‘dream idea,’ I realize this would probably exceed the allotted budget,” Garner wrote, “and require filling out lots of lengthy consent forms.”

Instead, he applied for funds to help transport a team of six to 10 students and their faculty adviser to the Kennedy Space Center for the formal competition, and to host a preliminary trial competition with a similar team from Virginia Tech – perhaps on the sand volleyball court on Nameless Field.

Garner advised a similar team last academic year – the first time a U.Va. team participated in the NASA competition – and came away determined to do it better the second time around.

Garner’s grant was funded through the Kinnier Award, a fund within the Mead Endowment designated for projects within the School of Engineering and Applied Science. Similar funds exist for Darden School of Business and McIntire School of Commerce faculty. The rest of the projects arose from the College of Arts & Sciences.

This year’s projects would doubtless have delighted Mead. The endowment was funded by gifts from the loyal students Mead touched, and Mead himself attended the dinners, including last year’s.

The tone has changed over the years, said Tom Darbyshire, one of the endowment’s founders and the emcee of Saturday’s event.

“In those first years, we, the alumni, spent a fair amount of time during these dinners telling you, the faculty, how Mr. Mead had inspired us. We shared our funniest stories and most tender memories,” he said. “But a few years later, when we were finally able to fund every proposal, something magical happened.

“The evening changed – from a group of nostalgic alumni talking about what Mr. Mead had done for us, to a group of faculty returning to tell us what they’re doing for current students. The torch passed, its flame growing dramatically brighter in the process.”

What’s Next for UVA’s Class of 2022? END_OF_DOCUMENT_TOKEN_TO_BE_REPLACED