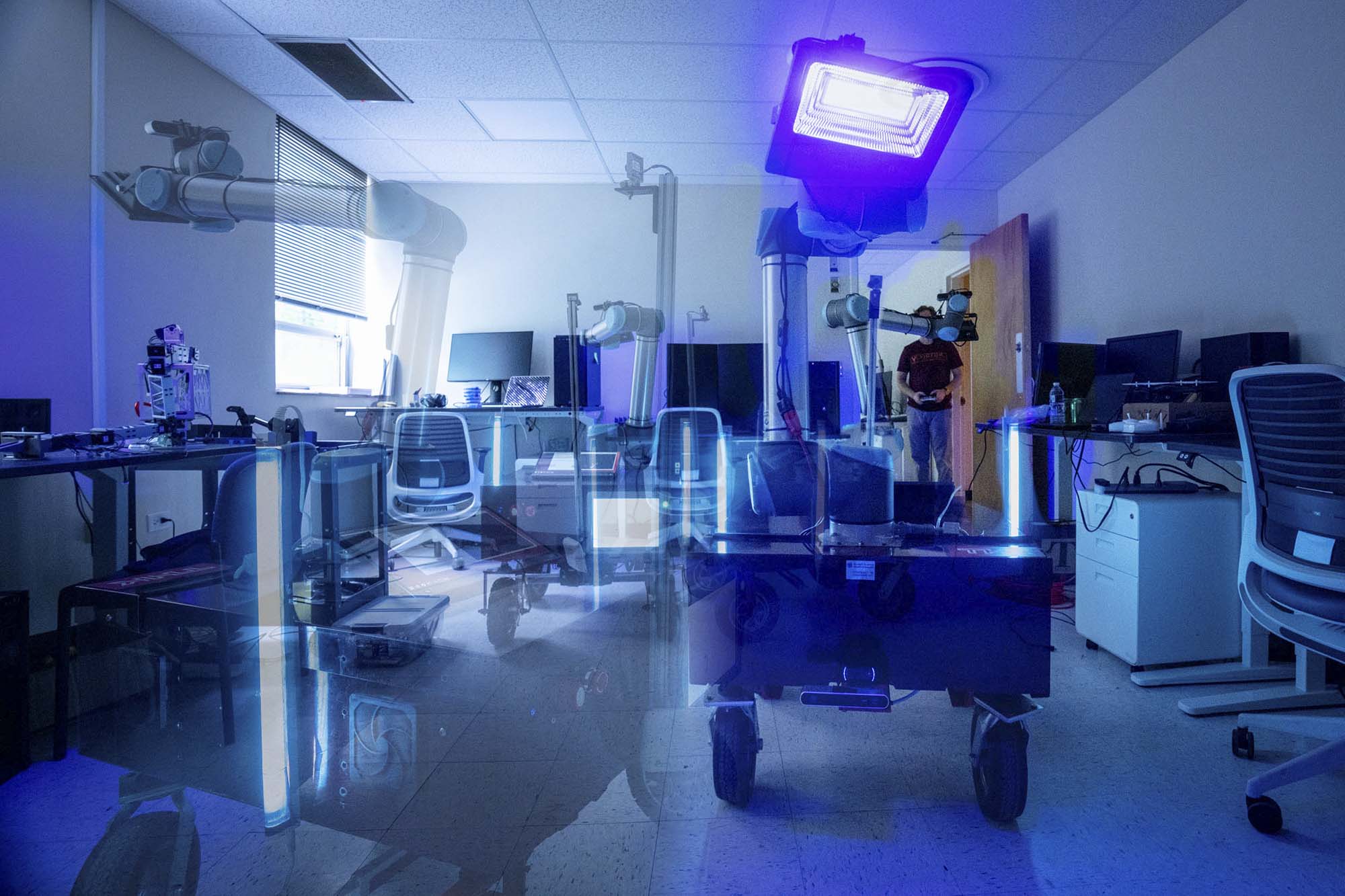 A mobile robot, designed to work in hazardous environments, has been modified to kill the virus that causes COVID-19. (Photos by Sanjay Suchak, University Communications)

Studies show that the coronavirus that causes COVID-19 is readily destroyed when exposed to ultraviolet light and heat while on surfaces, such as countertops, chairs, walls and floors. This vulnerability sparked an idea in the mind of University of Virginia mechanical and aerospace engineering professor Tomonari Furukawa, who last year designed a roving robot to operate semi-autonomously in hazardous areas.

Furukawa realized that he could attach UV and heat lamps to his robot and use it as a decontamination device to operate in rooms harboring the coronavirus, such as medical clinics or supermarkets and other businesses.

“In response to the pandemic of COVID-19, we began to work on the virus decontamination robot, since we had recently demonstrated in a contest that our robot can complete a large number of tasks in a disaster scenario, such as firefighting,” Furukawa said. “We knew we could use our state-of-the-art technology right away for robotic decontamination.” 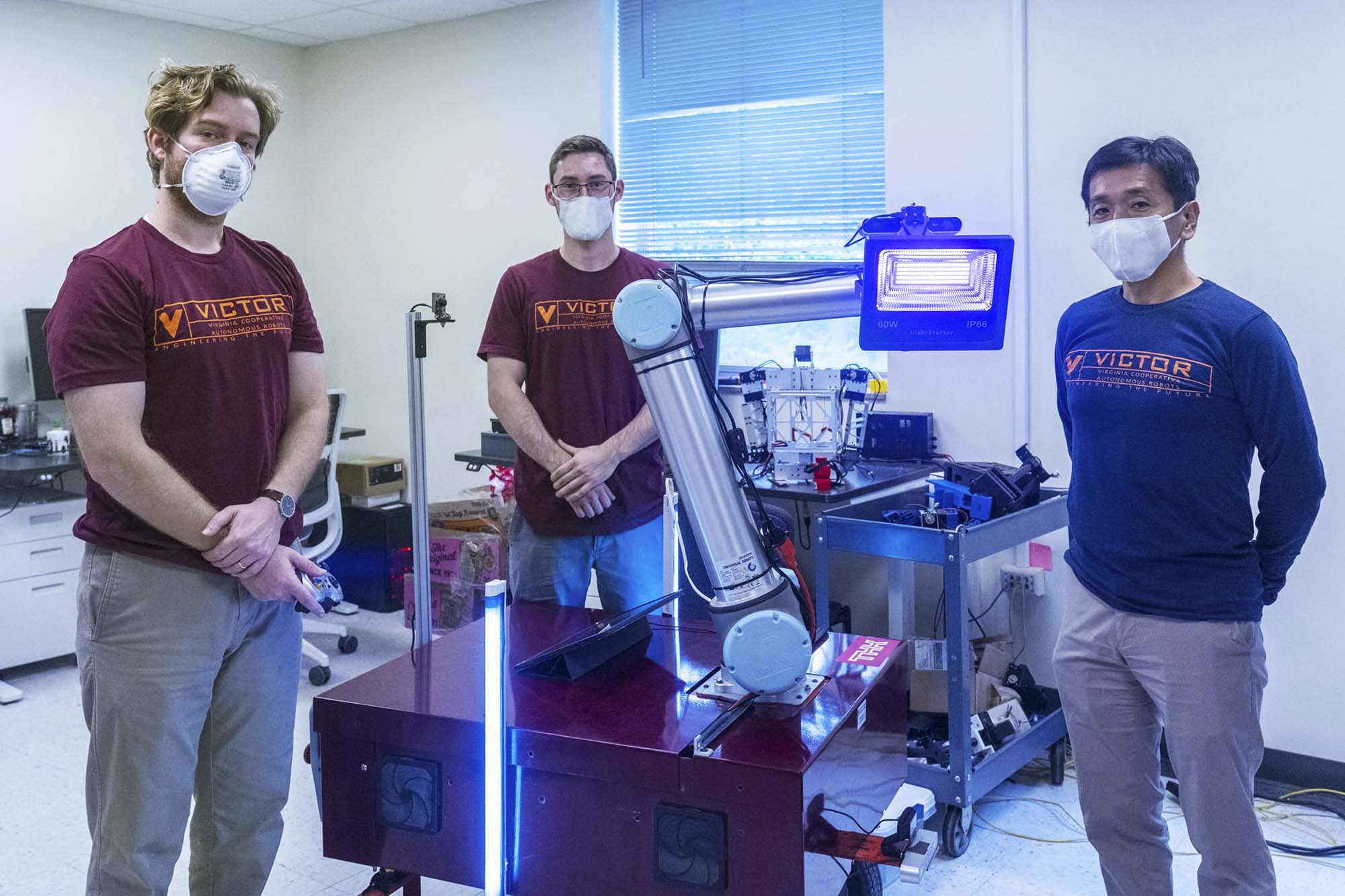 Furukawa came to UVA from Virginia Tech in August and brought with him his robotics program. He leads a cooperative, multidisciplinary team of engineering students at UVA and Virginia Tech in the development of robots that can operate both independently and alongside humans. Such machines can function in conditions dangerous to humans, such as inside nuclear plants, in the presence of poisons and pathogens, under temperature extremes and where clean air is absent.

Furukawa’s team installed multiple UV lamps and heat lamps to their robot – vertical linear lamps on the sides for “sweeping” large areas of walls and other vertical surfaces with disinfecting light; a lamp underneath to decontaminate floors while the robot moves about a room on its wheels; and another at the end of an arm to sweep horizontal surfaces such as countertops and lab benches and chairs.

“It will be the first robot we know of that can do “spot” decontamination of various surfaces, both vertical and horizontal, as well as in hidden areas that we can bring to light,” Furukawa said. “Our robot was developed in principle for disaster response, such as firefighting. Virus decontamination is also a disaster response task, where humans wish minimal physical engagement. Our robot can be useful for this mundane and potentially dangerous work.” 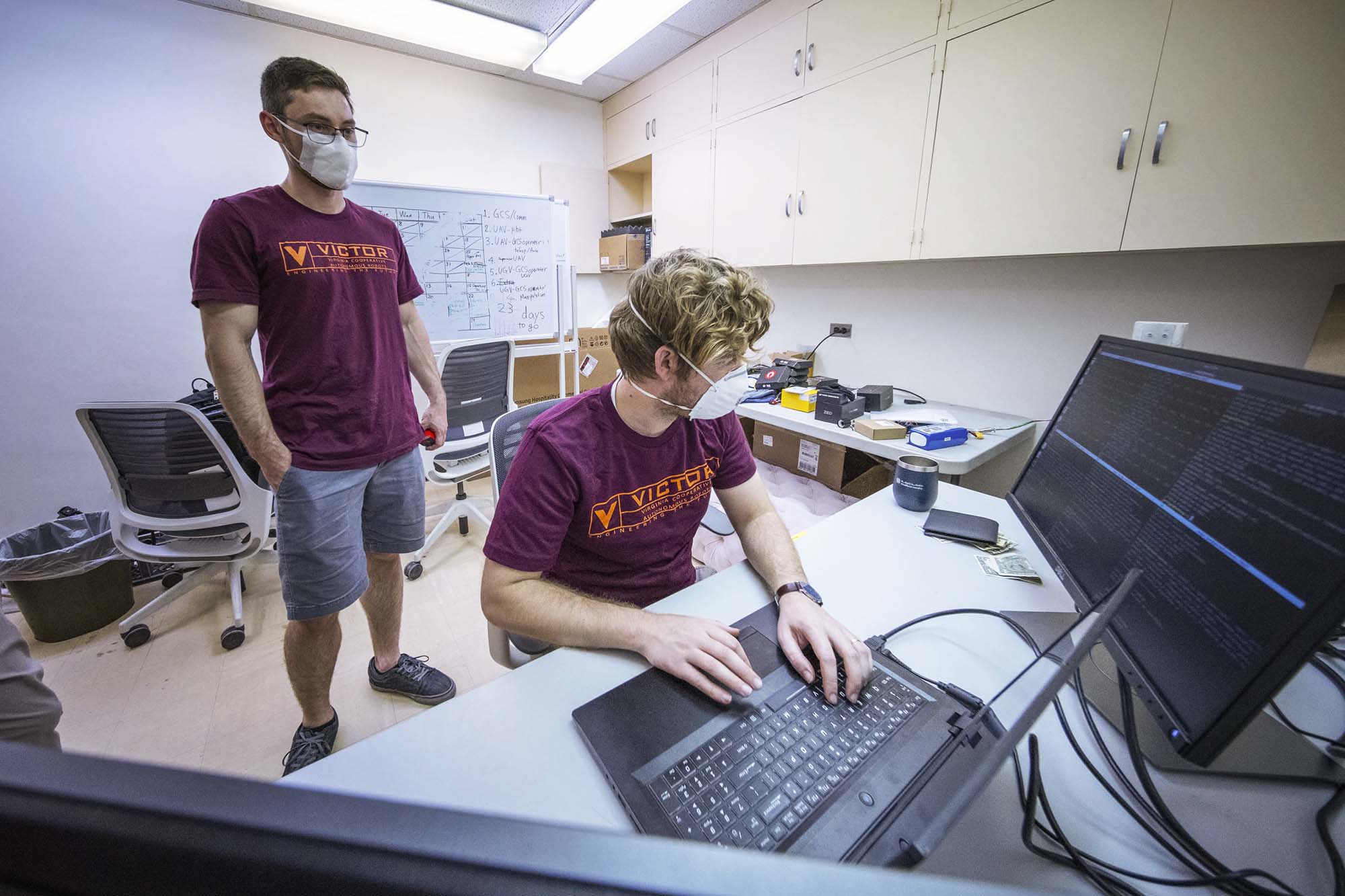 Conte and Leamy monitor their machine.

The robot also is equipped with a depth-of-field camera that, with computer software, creates a 3-D map of a given space, designed to ensure that no accessible areas go untouched by light and heat.

“That’s something humans can’t really do,” Furukawa said. “The robot, with its sensors, is more thorough, more likely to not miss spots, and can even be instructed to go back over areas if needed.”

The robot is designed to operate semi-autonomously – working in a room by itself while workers, such as clinical or lab staff, are not present – but under the watchful eye of an operator at a control board and video monitor in another room or location. The system uses its own wireless connection and does not need or interfere with established Wi-Fi on location. 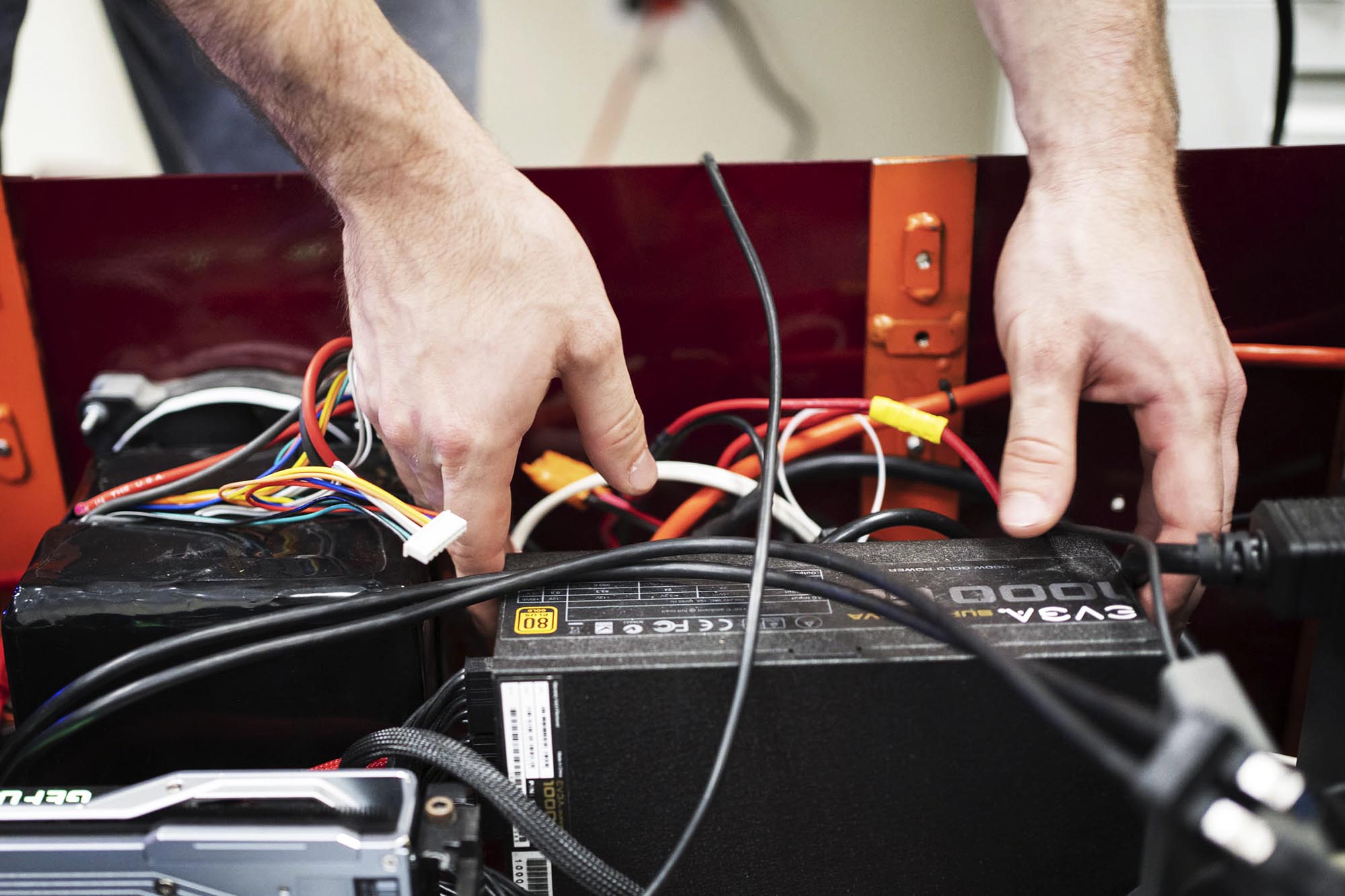 The robot’s electronics allow it to operate semi-autonomously.

“Semi-autonomous robots capable of completing real-world missions will come into increasing usage over time in a range of settings,” Furukawa said. “They are very good at accomplishing specific tasks in specific environments, and are well-suited for use in dangerous locations.”

Furukawa is looking to soon deploy his robot in clinical and other settings as he seeks partners in the use of his innovation.

In addition to Furukawa, the technology is being developed by graduate student Dean Conte, who is working on the hardware, and former student and software developer Spencer Leamy. The work is supported by Indie Co. of Reston, and THK Co. Ltd. of Tokyo.

Inquiries should be sent to Furukawa at tomonari@virginia.edu. 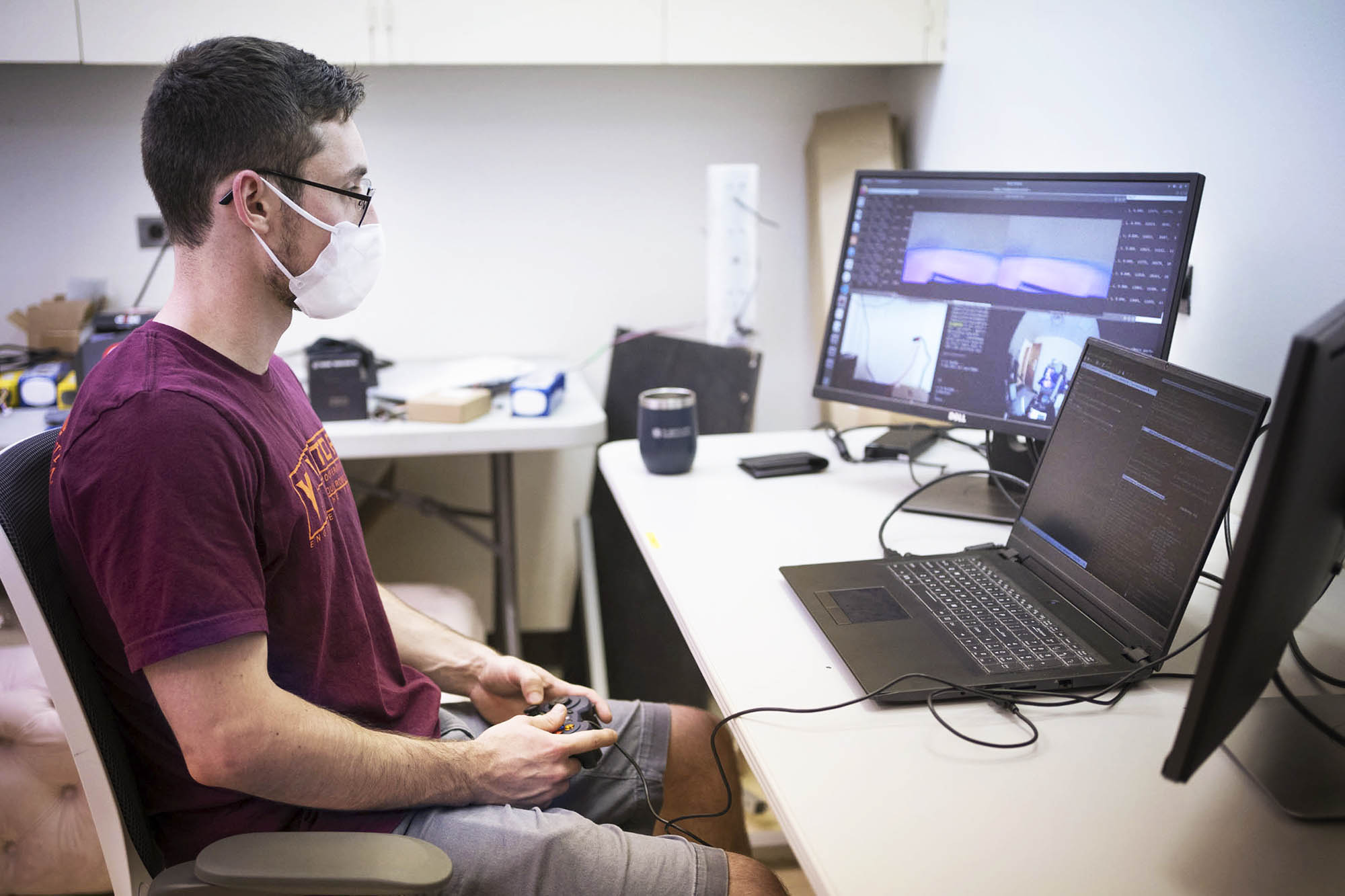 When Less Is More: How Harnessing the Power of Subtraction Can Add to Life END_OF_DOCUMENT_TOKEN_TO_BE_REPLACED