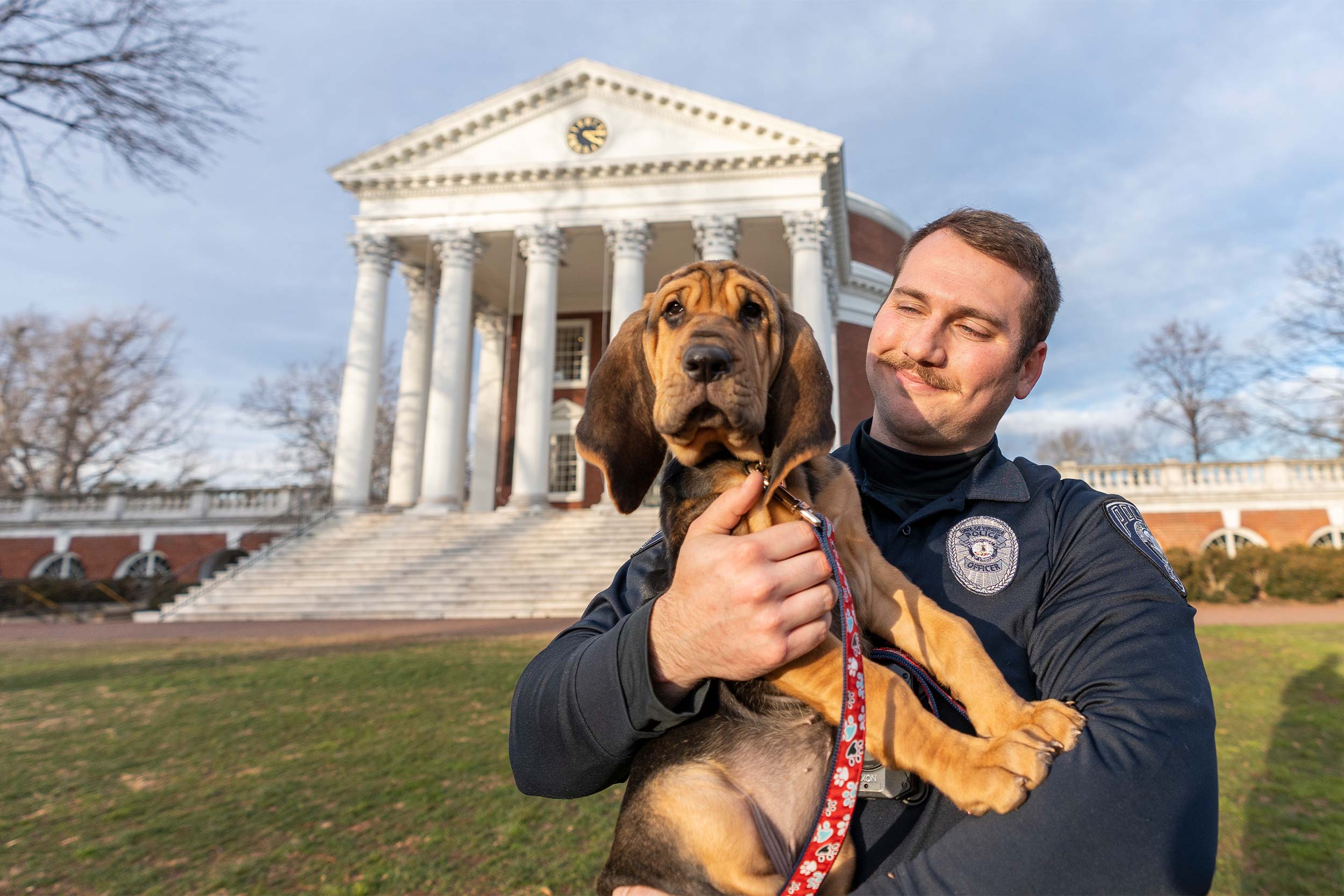 Maggie the bloodhound and her handler, officer Logan Moore.

The newest hire in the University of Virginia’s Police Department commanded lots of attention on the Lawn earlier this month.

She arrived on time for our interview with her entourage in tow. I could spy her from a distance, rounding the Rotunda, her tail perfectly upright. But when she arrived and we began our exchange, it quickly became apparent this would be a fractured conversation as, time and again, new admirers inched over for a not-so-quick nuzzle of her impossibly mushy and adorable muzzle. 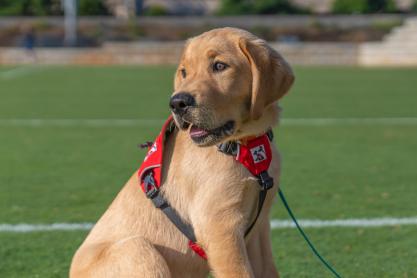 At the time, Maggie the bloodhound was 11 weeks old and just starting to learn the ropes. She is the police department’s first bloodhound and will use her astute sniffer to help find missing people.

But what caught her attention the most during our meeting was a used paper napkin that was discarded on the ground.

“They have the most scent receptors out of any dog breed in the world,” said her handler, officer Logan Moore. “So they pretty much naturally are instinctive into tracking and finding. So that’s why they’re mainly chosen by police agencies.”

That napkin must have smelled wonderful because she kept going back to it. Moore explained that her long ears are part of what makes her such a good napkin tracker. As she moved along sniffing, he explained, her velvety flaps were acting as aural funnels, dragging along the ground and bringing invisible scent particles up into the folds of her face.

Three weeks prior, Maggie had arrived in Charlottesville from Kentucky, where she was born. Just as Moore began to share her back story, a woman approached. “Oh, my goodness, is that a cute puppy,” she gushed. “You know, I’ve never seen a bloodhound puppy.” 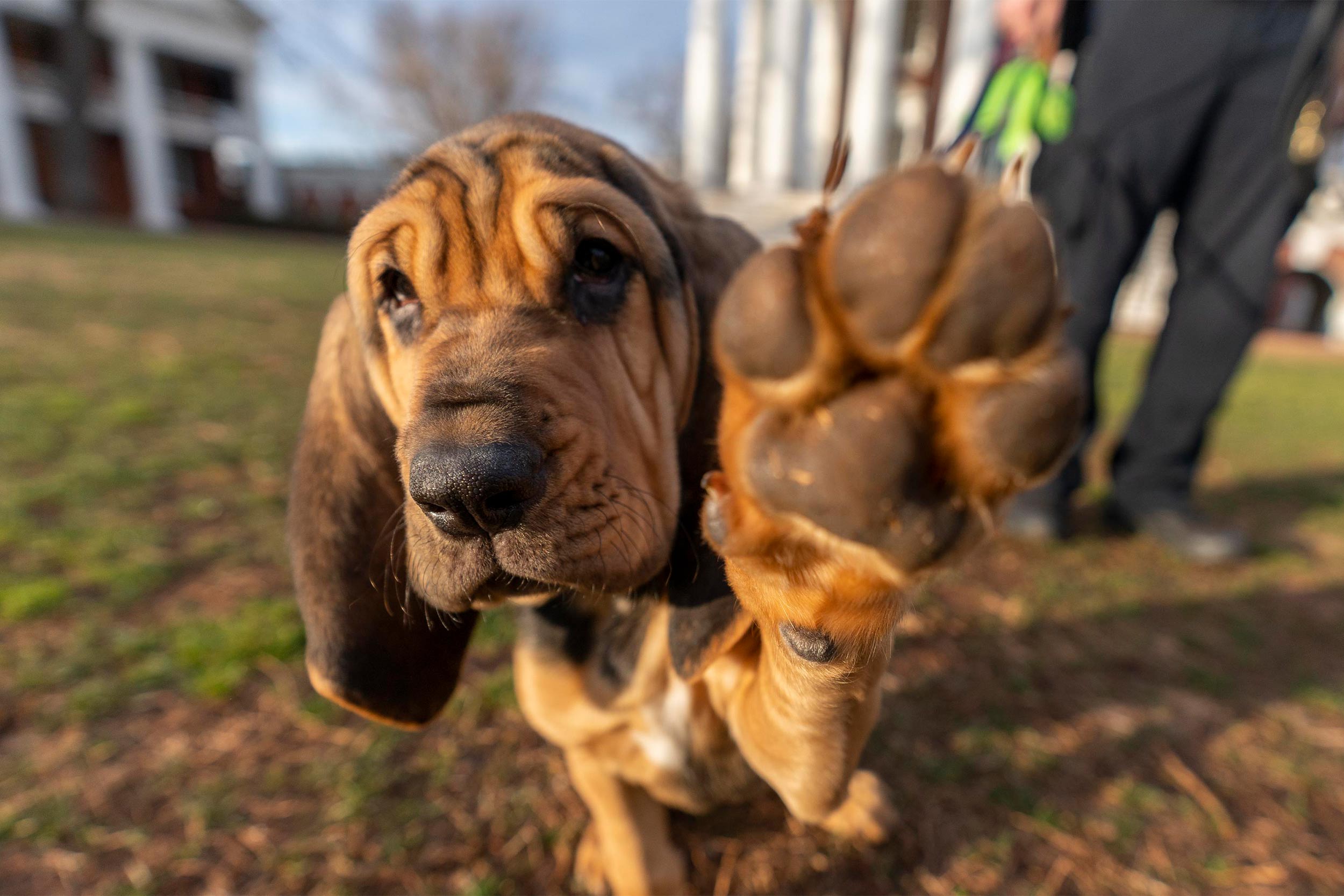 As I continued to record my conversation with Moore, the woman hovered nearby, commenting on how soft Maggie was. Then a look of realization came across her face. “Are you interviewing him? Oh, I’m so sorry,” she said.

Of, course there was no harm. There are not many people who can resist the allure of a puppy.

Maggie is also making doggy friends. She lives with Moore and his great Dane, Josie. Moore reports that she is also getting along nicely with her University Police Department canine coworkers, Rexo and Cooper.

For now, Moore is focused on socializing Maggie and getting her used to different terrain. He expects she will begin working when she is about 8 months old and certified to be a tracking dog.

“Leading up to that, she’ll be a part of a training group and gradually keep building upon her skills,” he said.

In addition to working at UVA, Maggie will be able to pitch in if she is needed in the surrounding community.

“As with all agencies, we kind of have a mutual aid kind of thing. So, if you need help or have a resource that another department doesn’t have, you can certainly outsource that or ask for assistance at any time,” he said. “Bloodhounds aren’t as common as you would think. Certain agencies have them, certain don’t. Whoever needs help, you can request assistance and we can try to go out there and help them best we can.”