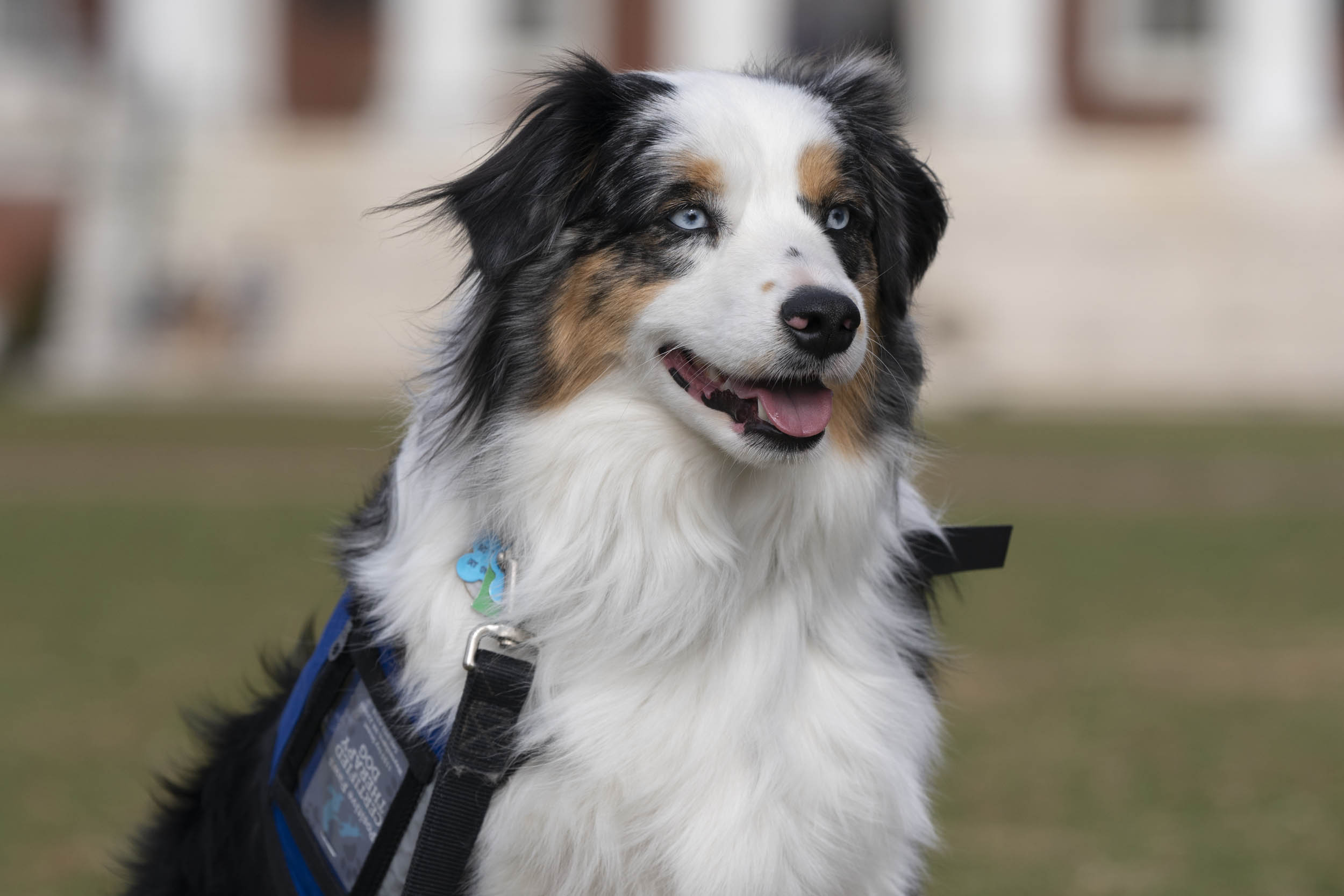 What do hot dogs, chicken and cheese have in common? These treats were the great motivators for Cooper, a miniature American shepherd who just graduated from doggie therapy school and is joining his owner, Community Service and Crime Prevention Sgt. Benjamin Rexrode, at the University of Virginia’s Police Department. 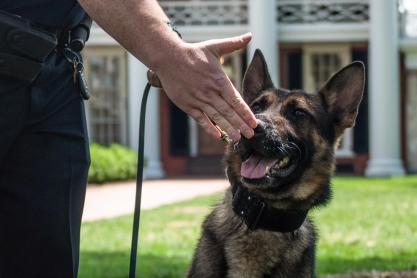 The American Kennel Club describes the breed as “good-natured, intelligent and devoted” – an excellent combination of traits for a therapy dog.

Rexrode has wanted to purchase and train a therapy dog for a long, long time. 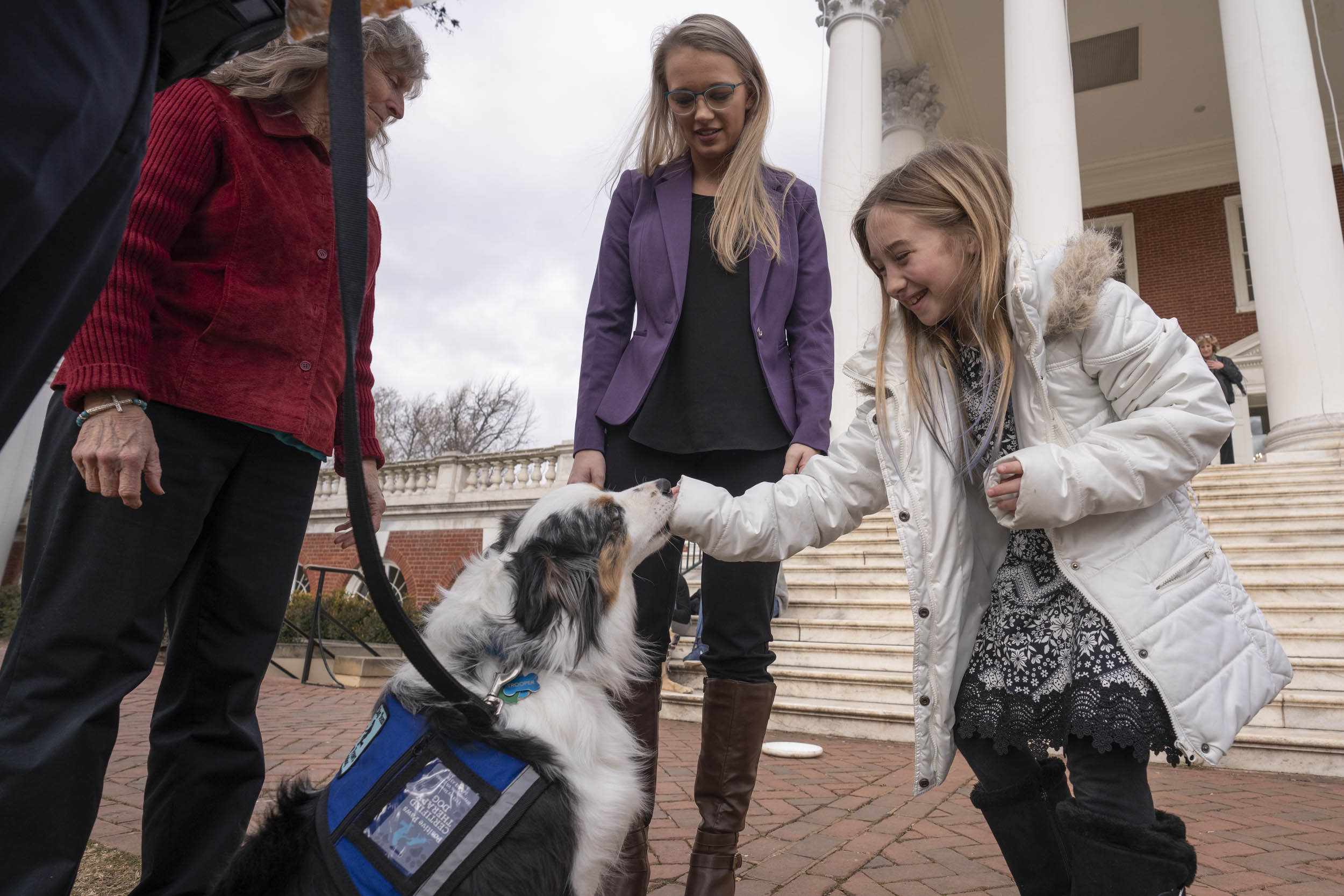 Nine-year-old Timberly Scott of Surrey was in Charlottesville for the funeral of her uncle, Joshua James Scott. She said she likes dogs because “they’re soft and sweet.”

That, and being able to bring Cooper to UVA to engage with the University community, made it a “no-brainer,” said Rexrode, who purchased the dog and paid for its training.

“What a wonderful addition Cooper is to the University of Virginia Police Department family,” interim UVA Police Chief Tim Longo said. “It is especially important to recognize Sgt. Rexrode for the creative approach that he has chosen in an effort to meet the needs of our University community by incorporating Cooper’s talents into our work.

“I also believe that it is important to note that Ben has made a personal contribution of his time, energy and financial resources in acquiring Cooper and ensuring the proper training and subsequent certification required of service animals. I deeply appreciate his generosity and look forward to working with him and Cooper as they go about their good work.”

The adventure began last January, after a friend-of-a-friend told Rexrode a breeder in Michigan had a dog she wanted to rehome. Said to be friendly and sweet, the miniature American shepherd seemed the perfect fit, so the police officer hit the road on a winter Friday, driving 12 hours and heading into a snowstorm to retrieve Cooper.

“It was during the polar vortex and it was like negative-11 degrees when I got up there to get him,” Rexrode said.

A few months after getting him home, Cooper began training at a place in Stuart’s Draft called Positive Paws. 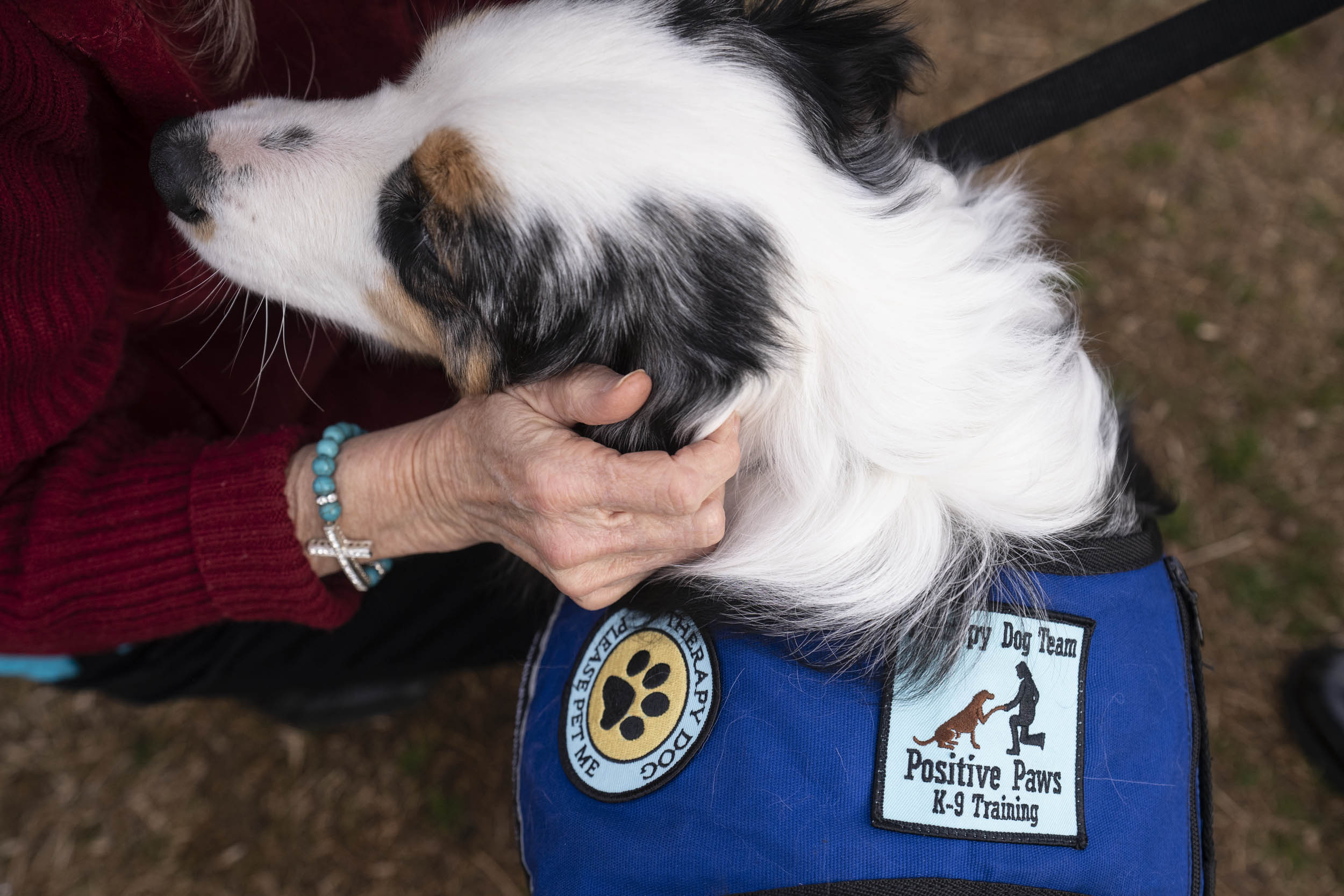 Cooper was certified as a therapy dog earlier this month. His therapy vest encourages people to “please pet me.”

“We would go to class once a week for like an hour-and-a-half, and you'd learn a new skill for that week, and then you got to work on it at home to try to get them better at it,” Rexrode said.

Finally, Cooper had to do 40 hours of in-service training, going out with other certified therapy dogs to schools, hospitals, libraries and nursing homes to hone his obedience skills.

Cooper, who has distinctive, ice-blue eyes and is always ready for a belly rub, is settling in nicely at UVA. Rexrode said he excels at cuddling, which is just what you want in a therapy dog.

The simple act of petting a dog has proven stress-reducing effects that Rexrode wants to exploit. Cooper will spend a lot of time on Grounds engaging with the community. 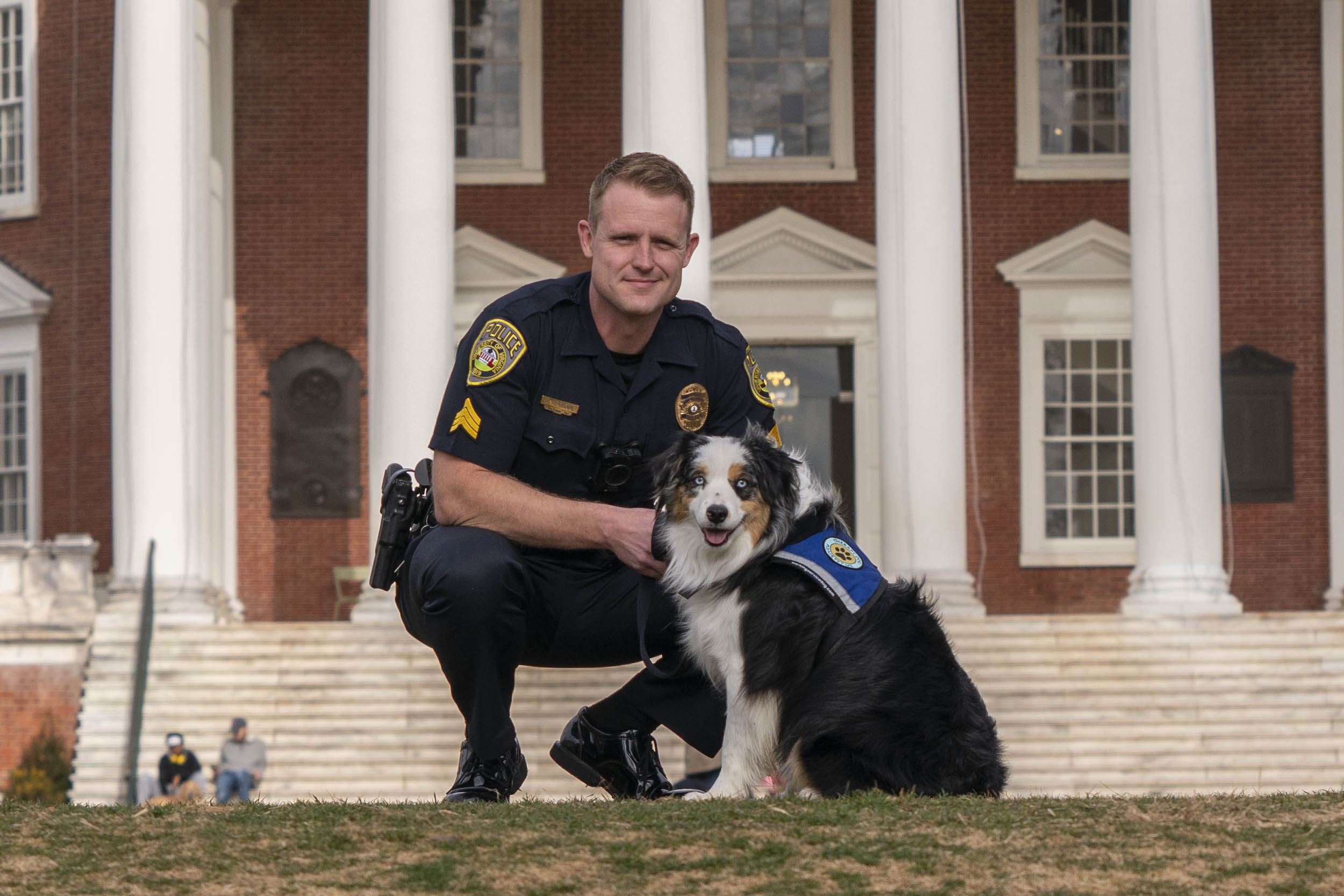 He will also assist with police business. “With crime victims, having a therapy dog can reduce stress and anxiety about going to court or meeting with the police,” he said. “If we can promote ourselves, saying, ‘We want to make the most, welcoming environment, so it’s possible for somebody to report something,’ this is another tool we have to do that.”

Cooper will also be something of a police department mascot. “He can change the mood of officers, who maybe had a busy morning or are dealing with something stressful,” Rexrode said. The simple act of petting Cooper or giving him a scratch behind the ear typically brings a smile, Rexrode said. “Most people love dogs!” 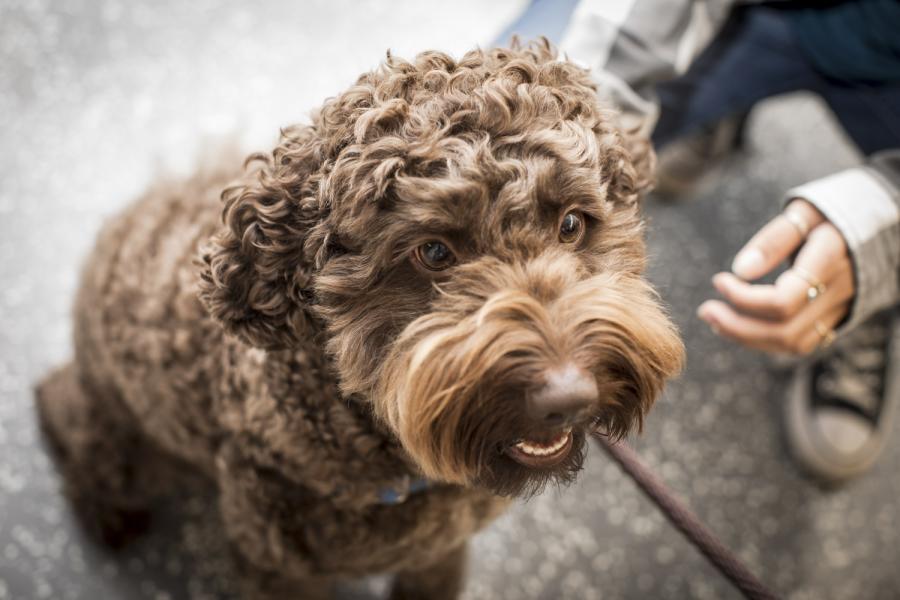 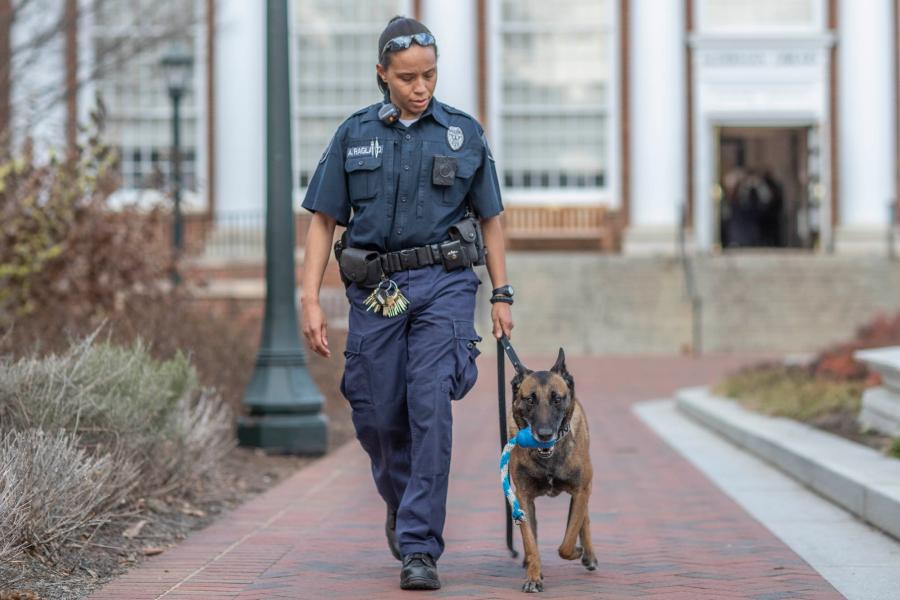 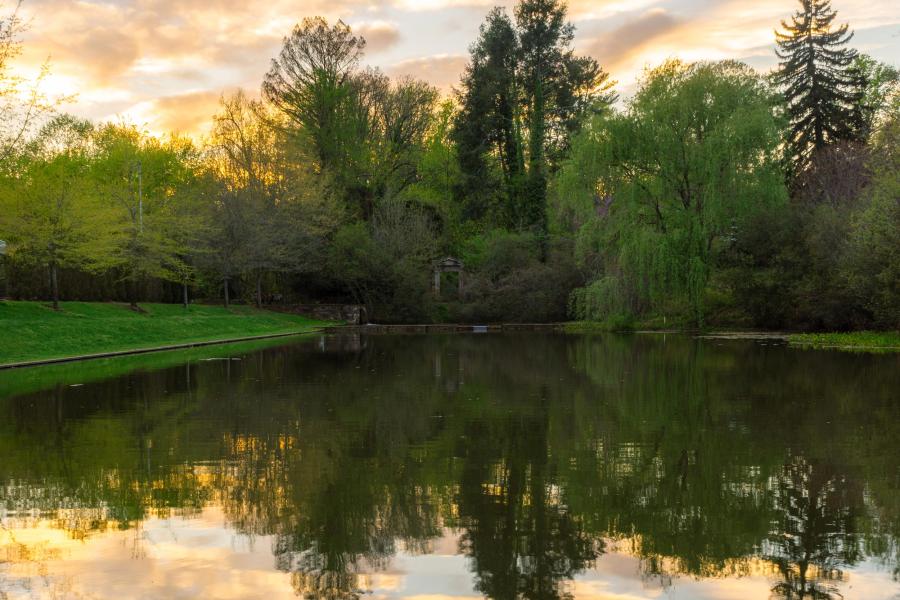