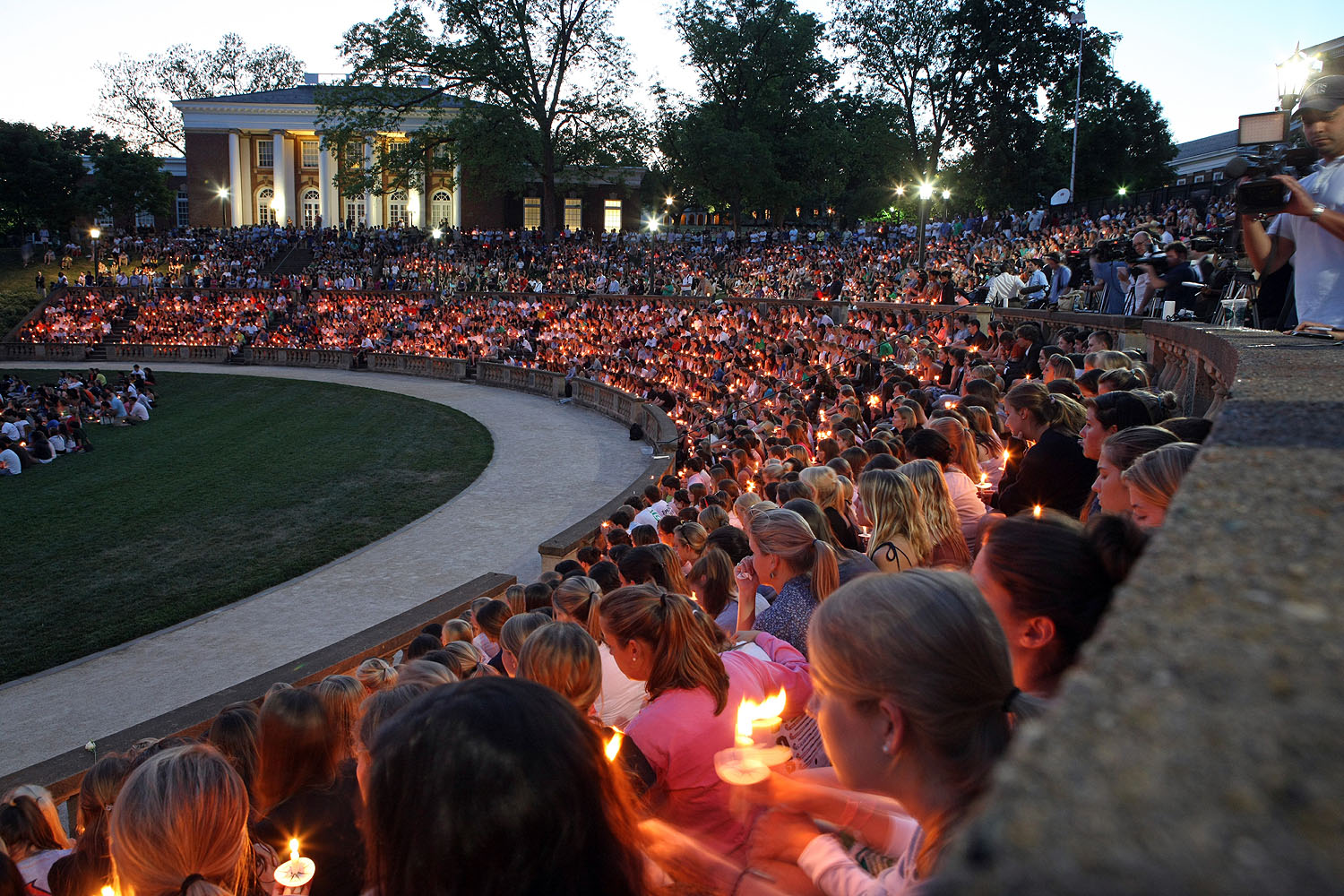 December 30, 2010 — Yeardley Love, a fourth-year student from Cockeysville, Md. and a varsity lacrosse player, died May 3 in Charlottesville. She was 22. Her death, allegedly at the hands of another student, drew national attention to U.Va. and the issues of campus community and dating violence.

Love was among many who left their mark on the U.Va. community who died in 2010. Some had not yet graduated from college; some were in their 90s. The 13 deceased professors taught tens of thousands of students and cumulatively spent more than 300 years in the classroom.

Bob Morgan was a professor to remember, according to current politics professor Larry Sabato, a former student.

Morgan earned his Ph.D. from the University of Virginia in 1951. He taught at the University of Nebraska before returning to U.Va. as an associate professor in 1957. He retired in 1989. A noted scholar of American government, Morgan published several books, including "James Madison on the Constitution and the Bill of Rights." He twice served as department chairman.

Working on a master's degree from Frank Batten School of Leadership and Public Policy, Jean-Charles had earned her undergraduate degree in French and foreign affairs from U.Va. in May 2009. She was awarded her master's degree posthumously.

Gasman, who grew up in Romania, was on the U.Va. faculty in the College of Arts & Sciences' art department from 1981 to 2001. She was an expert on symbolism in Pablo Picasso's artwork.

Perdue, who was a geologist for the U.S. Geological Survey, changed careers and received his Ph.D. in folklore from the University of Pennsylvania in 1971. He joined the faculty in 1971 and retired in 2007. His scholarship ranged from editing narratives of ex-slaves and Depression-era workers to writing and speaking about the folk cultures of the South, both white and African-American. He taught courses on American and Southern folklore, ethnohistory and oral history.

Sherman, a noted scholar in the fields of market regulation, anti-trust and industrial organization, taught at U.Va. from 1965 until 2000. He was chairman of the economics department from 1982 until 1990 and was the Brown-Forman Professor of Economics from 1982 until he retired. As department chair, he supported the early use of computer technology in economic research.

• Joseph Anthony "Pepe" Humphrey, retired as Neal and Nancy Wade Professor of Engineering and Applied Science in the School of Engineering, 62
Died: March 1 in Charlottesville

Hunphrey, who held a joint appointment in the Department of Biology, chaired the Department of Mechanical and Aerospace Engineering from his arrival in fall 2000 through December 2005 and remained active in research and teaching until his death.

In his research, he sought to understand how spiders sensed the right breeze conditions to float the farthest on their silken threads. He and a team of researchers wanted to figure out how to replicate and adapt those sensors for human use – to sense danger or other factors in the surrounding environment, including earthquakes.

• Joanne Simpson, a meteorology professor in the Department of Environmental Sciences, 86
Died: March 4 in Washington, D.C.

In 1949, Simpson became the first female meteorologist to earn a doctorate. Her career spanned six decades and included positions at some of the world's top research facilities, including the University of Chicago, the Woods Hole Oceanographic Institution and the National Oceanic and Atmospheric Administration's Experimental Meteorology Laboratory. At U.Va., she held the William W. Corcoran Chair in the College of Arts & Sciences from 1974 to 1979. After her stint at U.Va., Simpson became chief scientist for meteorology at NASA's Goddard Space Flight Center and worked there for 30 years, helping many U.Va. graduates start their careers, former chairman Michael Garstang said.

• Charlotte H. Scott, professor emerita of commerce and education and senior fellow at the Darden School of Business' Tayloe Murphy Institute (now Center) from 1976 to 1986, 84
Died: March 11 in Charlottesville

Scott graduated from Barnard College in 1947. She earned an M.B.A. degree from the School of Business of the University of Chicago in 1964. Before moving to Charlottesville, she was an economist for the Federal Reserve Bank of Chicago from 1956 until 1971, and served as assistant vice president from 1971 until 1976 – the first African-American woman to be appointed a vice president at the Federal Reserve Bank.

Darden Dean Robert F. Bruner said, "Most of all, I respected her courage. She was a pioneer – one of the few women faculty members at Darden in those years, and along with her husband, Nathan, the first tenured African-American faculty members at U.Va. Darden benefited by her example."

Kuhlmann-Wilsdorf came to U.Va. in 1963 as part of a two-career couple when her husband, the late Heinz G.F. Wilsdorf, was invited to join the newly established Department of Materials Science. Wilsdorf Hall is named in honor of the couple.

She was the first woman at U.Va. named as a full professor outside the schools of Medicine and Nursing and last taught University Seminars to first-year students after more than 40 years on the faculty. She was internationally recognized for her path-breaking work in plastic deformation, surface physics and crystal defects. She wrote more than 300 scientific papers and started two companies, HiPerCon, for high-performance contacts, and Kuhlmann-Wilsdorf Motors.

Gregory H. Olsen, a 1971 graduate of the Department of Materials Science, wanted to help create a building for interdisciplinary materials research, and he wanted to honor the Wilsdorfs, who were influential in his education and career. His $15 million lead gift led to the construction of the 99,000-square-foot, five-story Wilsdorf Hall.

Arwood was awarded his 2010 degree from U.Va. posthumously, with majors in psychology, Russian language and literature and Arabic language and culture. He had planned to earn a Ph.D. in cognitive science and apply it to understanding how the human brain processes music.

King, a Summerville, S.C. native was hit by a truck while riding his bicycle and died as a result of his injuries. He had just left The Haven, a multi-purpose community space with resources for the hungry, disadvantaged and homeless, at which he volunteered. At U.Va., King had been a teaching assistant for honors calculus, a job open only to the best first-year graduate students.

He came to the University in 1982 as the dean of African-American Affairs, later serving as professor of political science and government, before retiring in December 2003 from the Weldon Cooper Center for Public Service.

• Marvin Henry Hilton, lecturer in the School of Engineering and Applied Science's civil engineering department, 77
Died: on April 25 in Charlottesville

Hilton was a "double 'Hoo" with bachelor's and master's degrees in civil engineering and lectured in the School of Engineering and Applied Science for several years. He was a senior research scientist in the Virginia Transportation Research Council (a division of VDOT) for most of his career until his retirement in 1991, but he continued to be active in U.Va.'s civil engineering department.

• Yeardley Love, a fourth-year student from Cockeysville, Md., and a varsity lacrosse player, 22
Died: May 3 in Charlottesville

U.Va. athletic director Craig Littlepage told CBS that her teammates and friends described Love as "an angel." She was awarded her undergraduate degree posthumously.

• Nikki Renee Patterson, an electrician in the Division of Facilities Management, 38
Died: May 7 in Albemarle County

Patterson began work at Facilities Management in July 1996 as an electrician apprentice. She graduated from her apprenticeship in August 2001 and most recently oversaw the University's 44 emergency generators. She earned an "Extraordinary Contributor" award in 2007 for her work during an emergency power failure. She died as the result of injuries suffered in an automobile accident.

• Norman A. Graebner, professor of history emeritus, 94
Died: May 10 in Charlottesville
Renowned for his expertise in the history of American diplomacy and his skill as a teacher, Graebner joined the U.Va. faculty in 1967 and retired in 1986. For many years, his popular course on the history of American diplomacy regularly filled U.Va. lecture halls. "A legend at the University," read a Student Council report in 1986.

Although Graebner wrote, co-wrote or edited more than 20 books, mostly in the field of American diplomatic history, teaching always dominated his life and brought him his most cherished rewards, he recalled in his 2002 autobiography, "A Twentieth-Century Odyssey: Memoir of a Life in Academe."

• Andrew Charles Ruppel, professor of the management of information technology emeritus in the McIntire School of Commerce, 71
Died: May 20 in Charlottesville
After 30 years as a professor of the management of information technology, Ruppel retired in 2001. In his retirement, however, he remained a vital presence at McIntire, making use of his outstanding organizational and management skills to help oversee the school's move from Monroe Hall into its new home in Rouss and Robertson halls on the Lawn.

Ruppel's service to the University was honored in 2005, when, in a Founder's Day ceremony presided over by President John T. Casteen III, a tree was planted in recognition of his significant and lasting contributions to the design, planning and maintenance of the University's Grounds. The planting of a Founder's Day tree is meant to serve as a living memorial celebrating the legacy of a worthy individual.

In 2008, in recognition of his long service to the University and his key role in McIntire's "Back to the Lawn" building project, the Board of Visitors honored Ruppell by renaming the portion of Hospital Drive in front of Robertson Hall "Ruppel Drive."

Gomez received his medical degree from the U.Va. School of Medicine in 1991 and completed his residency at U.Va. in internal medicine in 1994. In addition to his medical training, he also had a background in medical ethics and earned a doctorate in public policy studies from the University of Chicago.

• Dr. Samuel E. Miller, former Health System physician, 95
Died: June 3 in Abingdon, Va.
Miller graduated from the U.Va. School of Medicine in 1950. He returned to his hometown of Abingdon and practiced medicine from 1952 until 1971. He then returned to U.Va. and co-founded the Medical Family Practice Unit.

• Kevin Morrissey, managing editor of Virginia Quarterly Review, 52
Died: July 30 in Charlottesville
Morrissey joined the staff of VQR, the University's award-winning literary magazine, in August 2004. He spent his career in publishing; prior to joining the University, he had been the marketing and sales manager for the Minnesota Historical Society Press.

• John DiPuma, bus driver, 48
Died: Aug. 14 in Charlottesville
DiPuma worked for the University Transit Service and drove the Green Route and Central Grounds Shuttle. At the age of 14, he received a transplanted kidney from his father. He had a deep appreciation for that gift and the 25 years of life it made possible for him before kidney failure left him again needing dialysis.

• John C. Everhart, a rising third-year student, 21
Died: Aug. 15
Everhart died when his SUV flipped over on Interstate 80 in New Jersey. He was pursuing a double major in economics and history and had been accepted to the Frank Batten School of Leadership and Public Policy.

• Mario di Valmarana, architecture professor emeritus, 81
Died: Oct. 13 in Venice, Italy
Valmarana, a native of Venice, came to U.Va. 37 years ago for what began as a three-month appointment. He ended up staying, discovering and sharing Italian architect Andreas Palladio's influence on America and modern architecture.

Valmarana also generously shared his family home, the Villa Capra-La Rotunda in Vicenza, designed by Palladio and built in 1560, with the students over the years – even after he retired. The Vicenza program, the University's first official international study program, was started in 1975. The Venice program followed four years later.

For All of Us END_OF_DOCUMENT_TOKEN_TO_BE_REPLACED