In Memoriam: Stephanie A. Guerlain, for People and Horses a Model of Caring, Support 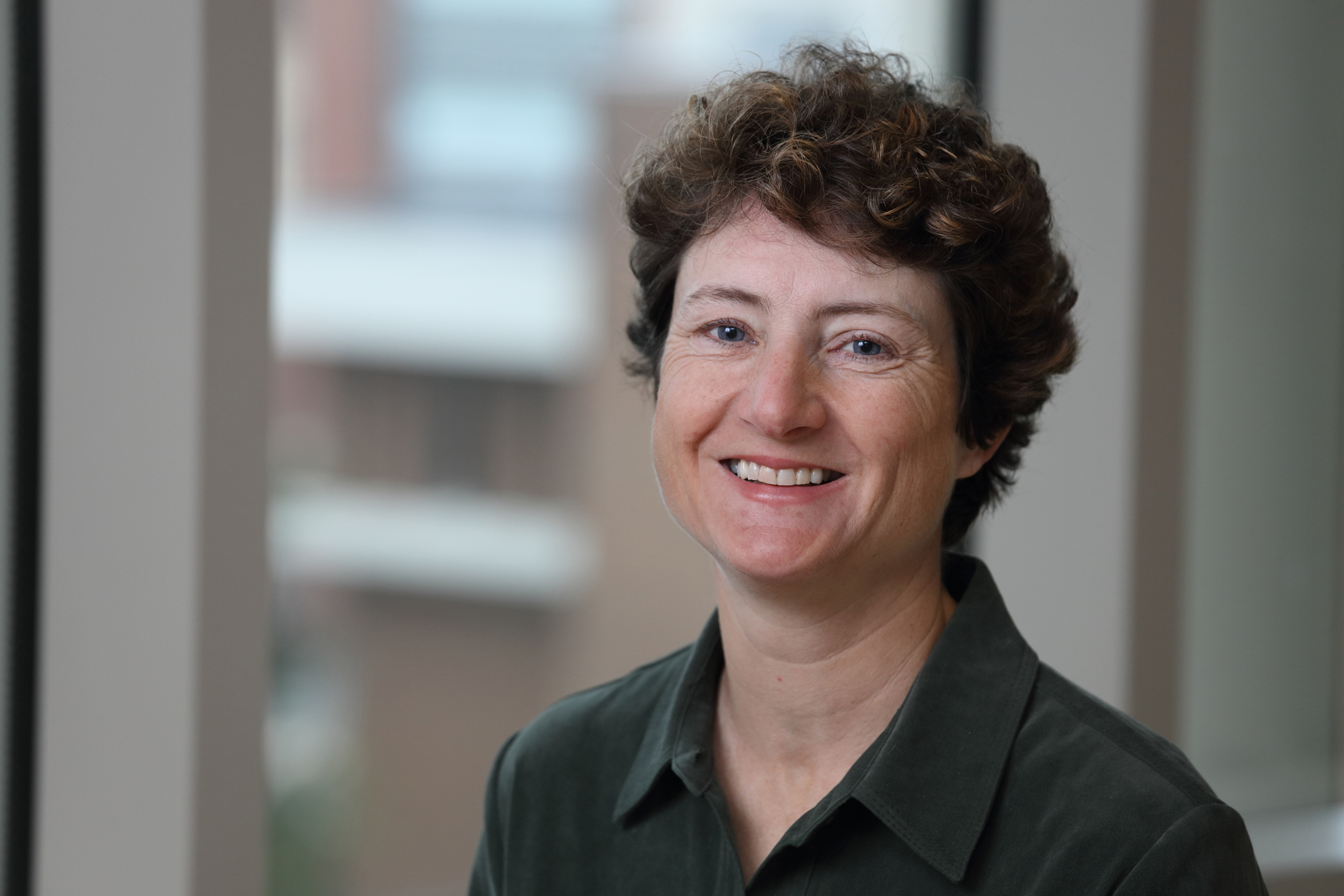 In her 21-year career as a University of Virginia engineering faculty member, Stephanie A. Guerlain’s research and teaching focused on designing and evaluating systems to make them easier, faster and safer to use. Off Grounds, Guerlain also taught generations of aspiring equestrians how to ride, show and care for the horses she loved so much.

Guerlain, 52, died Feb. 21 in Charlottesville. Her husband, Robert Haschart, is a University librarian. A memorial service will be held Saturday at 5:30 p.m. in the UVA Chapel. Following the service, friends and family members are invited to gather in the auditorium of the University’s Harrison Institute and Small Special Collections Library.

Those who knew Guerlain say that in addition to her significant research accomplishments, she was a walking, talking system of caring, mentoring and support.

“Stephanie was an inclusive and gifted educator who made a tremendous difference for countless students,” said Brian L. Smith, professor and chair of the Department of Engineering Systems and Environment. “She will be deeply missed by all who had the privilege of knowing her.”

UVA Engineering Dean Craig H. Benson said the outpouring of support from the Charlottesville community and from all corners of the University, including the Provost’s Office, the Office of the Dean of Students, the University Library, the UVA Counseling and Psychological Services team and the UVA Faculty and Employee Assistance Program, has been extraordinary.

“The loss of such a long-standing, valued member of our community is very difficult,” Benson said, “but the care and concern so many people offered are a great comfort to all of us, and a tremendous tribute to Stephanie.”

Donald E. Brown, W.S. Calcott Professor in the Department of Engineering Systems and Environment, said Guerlain was a premier human factors engineer who made significant contributions to the design of engineered systems.

“These ranged from the design of efficient and safe controls systems for offshore platforms to the creation of new, more effective and accurate processes for classifying blood types,” he said. “She was passionate about making technologies friendlier to human users and, by doing so, making technology serve the broader interests of humanity.”

Guerlain worked for the MITRE Corporation, Apple and Honeywell before joining the UVA Engineering faculty in 1999. Her research and teaching focused on human factors, human-machine interaction and cognitive systems.

In 2001, she earned a prestigious National Science Foundation CAREER Award for early-career faculty, which supported a project to better understand surgical teams’ decision-making in hospital operating rooms and develop a method to train health care providers in surgical decision-making in safe, simulated environments. Her aim was to reduce medical errors and improve communication and coordination during surgeries.

In 2008, she was invited to give a talk about cognitive engineering at the National Academy of Engineering’s Frontiers of Engineering symposium. In her report accompanying the talk, she explained cognitive engineering as “the practical need to understand and improve quality, safety and efficiency in high-impact, complex domains, such as aviation, medicine and nuclear power control, where poorly designed systems can lead to major accidents.”

Gregory J. Gerling, an associate professor in the Department of Engineering Systems and Environment, remembers Guerlain’s work with the operators of a chemical plant where an explosion had occurred; her expertise led to a redesign of the plant’s control system and user interface to make it more intuitive for plant workers.

“It was a nice example of how to take very, very complex relationships between data and variables and create emergent features in the graphical display which were intuitive,” Gerling said. “I’ve met few people who had this ability.”

Guerlain passed along her passion for her work to her students, and students said she made the subject matter real and relevant to them.

“She was such a great professor that she could put all this academic jargon and concepts into everyday language, which made it so much easier for me to make connections with the research I was doing and to even relate to my daily life experience,” said Minghui Sun, a systems engineering Ph.D. student, who took one of Guerlain’s courses in spring 2017.

“That was my second semester at UVA, and I was still picking up my English,” Sun said. “She was so patient with me and made her class such a safe place for me to jump in with my broken language. That was the first time that I felt I could also be part of a conversation here.”

Systems engineering master’s degree student Tina Tang said Guerlain had a gift for taking the complex engineering concepts she was teaching both undergraduate and graduate students and turning them into real-world examples.

“She wasn’t afraid to try new things, such as interactive textbooks, and she was open to student feedback to improve the process for future classes,” Tang said. “I am thankful I had the opportunity to learn from her.”

In 2003, Guerlain established a partnership with the Universidade Federal do Rio de Janeiro, the Universidade Federal of Rio Grande do Sul and The Ohio State University for a cognitive systems engineering exchange program. The exchange was funded by the National Science Foundation, the U.S. Department of Education’s Fund for the Improvement of Postsecondary Education and a program called CAPES in Brazil’s Ministry of Education.

UVA undergraduate students would spend six months with peers in Brazil developing systems engineering projects and collecting data in real-world domains like the oil and nuclear industries, aviation, health care and emergency response. Then the UVA and Brazilian students would come back to Virginia for six months to complete their projects by analyzing their data and proposing solutions. Students took courses together, socialized, learned the language and culture of each other’s countries and recruited future cohorts of students.

“Stephanie made extraordinary efforts for bringing people together in several dimensions, either personally or academically,” said José Orlando Gomes, professor in the Department of Industrial Engineering and for the graduate program in informatics at the Universidade Federal do Rio de Janeiro. “I have no words to express my sadness in this moment.”

In 2011, Guerlain jumped at the chance to join faculty on the inaugural Maymester, a partnership of UVA and the Institute for Shipboard Education’s Semester at Sea program. The voyage Guerlain participated in focused on the National Academy of Engineering’s “Grand Challenges for Engineering,” and she taught a class called “How to Design Technology That Meets Human Needs.”

UVA Engineering Executive Dean Pamela M. Norris participated with Guerlain and remembers her and Haschart’s full immersion in the experience and their joy in exploring the world together.

“We worked hard, and we played hard, fully embracing the opportunity of learning from each other and our surroundings as we sailed through South America, visiting and performing service in local communities, exploring the local cuisines and coffees, studying the uses of technology, snorkeling in Belize, birdwatching in the rainforest, and developing a more sophisticated and nuanced view of the world,” Norris said.

Guerlain grew up in Connecticut and started riding horses when she was 3. As a teenager, she was among the top 10 riders for her Professional Horsemen’s Association class, and she later rode for Tufts University’s equestrian team.

After she finished her Ph.D. at The Ohio State University in 1995 and moved to Charlottesville in 1999, she discovered the local foxhunting community and began working with “off-the-track” thoroughbred horses, retired from racing.

That was another situation in which Guerlain’s gifts for patience and teaching came in handy, because such horses are “generally hard to ride, and have a lot of baggage that needs undoing, but they are extremely athletic and fun if you can get them in the right mind-set,” she wrote on the website for Sugarday, the 55-acre horse farm on Barracks Road that she has owned with her husband since 2017.

“The best thing about riding is all the life experiences created with friends, family and animals,” she wrote.

The local equestrian community returned the sentiment with an outpouring of sorrow and sympathy on social media after Guerlain’s death.

Fellow rider Martha Drum wrote on Facebook, “Let’s speak of Stephanie and follow her example of generosity often, even if it means crying and laughing in the same breath. Encourage a timid older rider. Let a kid show your nice horse in a couple classes. Go all out with your Halloween costume next fall. Say her name, share happy pictures and memories, and keep trying.”

Elizabeth King, master of foxhounds for Farmington Hunt Club and owner of Millington Stables, said Guerlain handled the club’s website, membership lists and secretarial details for their eight horse shows per year. “She did everything,” King said. “What would take her two seconds, it’s going to take us a long time to figure it all out. Thanks to her, everyone knew what the whole community was doing.”

King remembers Guerlain inviting her and other local equestrians to systems engineering classes; Guerlain wanted to give her students a real-world example of process efficiency by analyzing the process of putting on an equestrian event. Students got the opportunity to pepper King and other riders with questions.

King said Guerlain, in turn, brought her engineering skills to her work with horses, writing a peer-reviewed research paper meshing the two. Published in 2001 in the journal Ergonomics in Design, the paper applied cognitive task analysis, which is typically used to understand why people behave the way they do in particular situations, to the rigors of competitive horse events.

“She helped a lot of people when they had problem horses,” King said. “She worked the horses on the ground and really got them going well. She had a sixth sense about the whole thing; she understood, mechanically, how horses do things and what they’re thinking about while they’re doing it. She really had the science of the horse.

“When you’re dealing with horses, you have to have a lot of patience, and she had a lot of that.”

And to the horses’ owners, “she could explain one thing about five different ways, and that really helped, because not everybody’s brain works the same way. She was able to break it down into parts to help them figure out what their horses needed.”