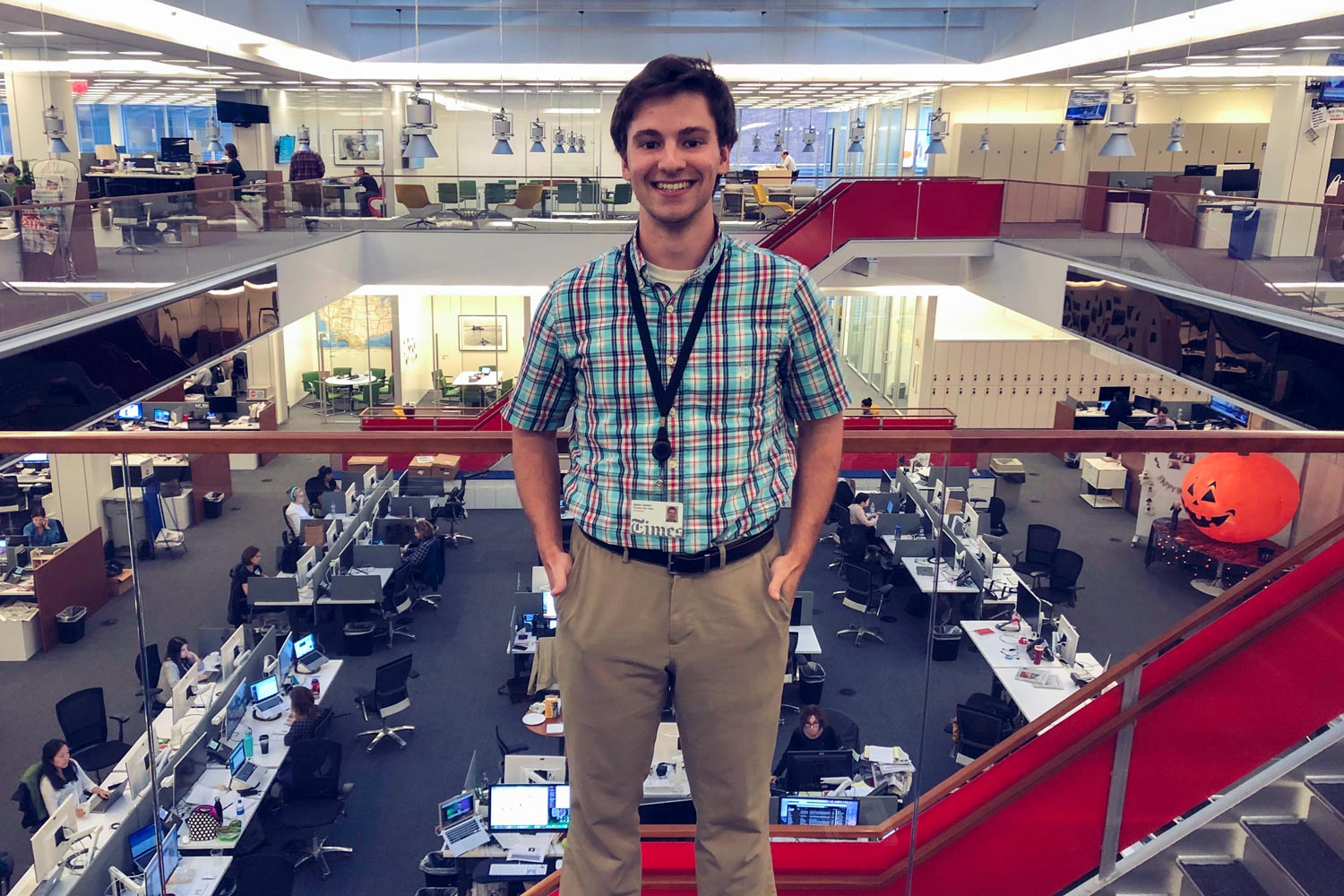 Sam Ezersky graduated from the University of Virginia in 2017 with a degree in mechanical engineering. After he walked the Lawn, he walked into his dream job as a crossword puzzle editor for The New York Times, working with fellow UVA alumnus Will Shortz, a 1977 School of Law graduate.

Ezersky, who sold his first crossword puzzle to the Los Angeles Times at age 16, crafted a UVA-themed crossword to mark the University’s bicentennial and this week’s inauguration of the ninth UVA president, Jim Ryan. The puzzle was not printed in the Times, but you can find it here.

UVA Today asked Ezersky a few questions about his efforts.

Q. How long did it take to create this puzzle?

A. Probably 10 hours from start to finish, but done in bursts. The entire process involves (in order): brainstorming theme ideas and answers, designing the grid skeleton around the final set, filling the grid with all the other answers and writing all the clues once the grid is finalized.

Out of all these steps, filling the grid takes the longest, because there’s so much trial and error. That top-right corner, with those GO/HOOS/CORNERSTONE theme constraints, was the most challenging area … but it’s also where I began. You always want to tackle the patterns with the fewest options ahead of time, so you’ll know early if something needs tweaking.

For instance, at 16-Down, that initial O?S?E? pattern yielded only OYSTER, OUSTER, and OUSTED in addition to ON SPEC.

Q. How does this UVA puzzle compare on the scale of difficulty with New York Times crosswords?

A. The New York Times Crossword gets harder as the week goes on, with larger Sunday puzzles at about a Thursday difficulty. The puzzle I’ve made here has mostly Monday- or Tuesday-level clues, so it’s on the easy side, meant to be accessible to solvers of any skill level.

That said, some of the difficulty can be ascribed to the fill itself: answers like the uncommon name VIGGO, the hard-to-parse GEN X/IN OT/IT’S LIT, and the tough-ish words CLAVE/UVEA/BOSC/ALVEOLI all add to a potential solving challenge.

Q. Did you come up with all the UVA clues just based on your great memories of being on Grounds?

A. You might joke, but there’s definitely truth to this. When I clue an answer, I usually just sit there and think for a few moments before hitting up any search engines, dictionaries and whatnot.

When I got to IAN, for instance, I immediately wondered if there was anyone named Ian I could somehow tie to UVA, and then those Ian Frye field goals came to mind! Same with BIO, although my only class in Gilmer was CS 1110. I still remember crossing McCormick Road from my Echols dorm for those 1 p.m. classes in the spring of 2014.

Q. Is it easier or harder to build a puzzle with a theme?

A. Both. On the surface, a themed puzzle is easier to create; once you’ve figured out your theme set and grid pattern, the filling is relatively easy (albeit tedious at times). Meanwhile, a theme-less puzzle – run every Friday and Saturday in The Times – has mostly longer words and a more wide-open grid by nature. Not only is the grid daunting enough to complete, but it should be full of fun, interesting vocabulary throughout, with a minimal amount of short “crossword-ese” holding everything together.

That said, themed puzzles can take various forms, so sometimes there may be crazy grid constraints involved in pulling off a novel gimmick. More importantly, while it’s one thing to make a themed puzzle, it’s another thing to make a good themed puzzle. At The Times, where I review our crossword submissions, the most common reason for rejection is the puzzle’s theme not being quite interesting enough overall. And while there are several tried-and-true theme types out there, the goal is for the puzzle to be fresh and exciting for the solver.

Thus, my vote for “toughest day of the week to construct” is Monday, though I believe I’m in the minority amongst my colleagues. Brain-crushing, ridiculous-looking theme-less puzzles are my favorites to create after all.

Q. Do you have any favorite crossword clues from over the years?

A. You’re opening up Pandora’s box here, but I’ll try to limit myself to my top five, in no particular order:

“Climbed in a window?”: SCROLLED UP

“Turner on the radio”: KNOB

Looks like we’re already up to seven. I should stop now.

Q. How about favorite memories of your time at UVA?

A. Where do I begin? I guess I can’t not bring up my first-year hall’s Day 1 icebreaker, where I shyly revealed I wrote crossword puzzles for The New York Times, only to have another hallmate exclaim that he was an avid solver himself. If I wasn’t feeling at home already, that was the difference-maker.

I certainly won’t forget taking occasional nighttime excursions to the McCormick Observatory, followed by late-night grub from the Castle or Crossroads. I had my Bodo’s order down to a science, too: BLT on an everything bagel with onions, avocado, Swiss and sprouts.

I loved crossing the Lawn every day for class when I lived by the Corner. I loved discovering my favorite nooks to work around Grounds, from the terrace in the Physical Life Science Building to the Deloitte Lounge in Garrett Hall. I loved shooting hoops at the Dell when enough of the guys wanted to play. I loved that I had the greatest network of friends, peers and faculty around me.

I may be working my dream job in my dream city, though I can only hope for life to be as exciting now as it was in my four years at UVA.

A Year We Will Never Forget: 2019-20 in Review END_OF_DOCUMENT_TOKEN_TO_BE_REPLACED

‘What Will You Carry With You?’ Remarks From UVA President Jim Ryan END_OF_DOCUMENT_TOKEN_TO_BE_REPLACED