Michael Terrell: Finding His Way at the University 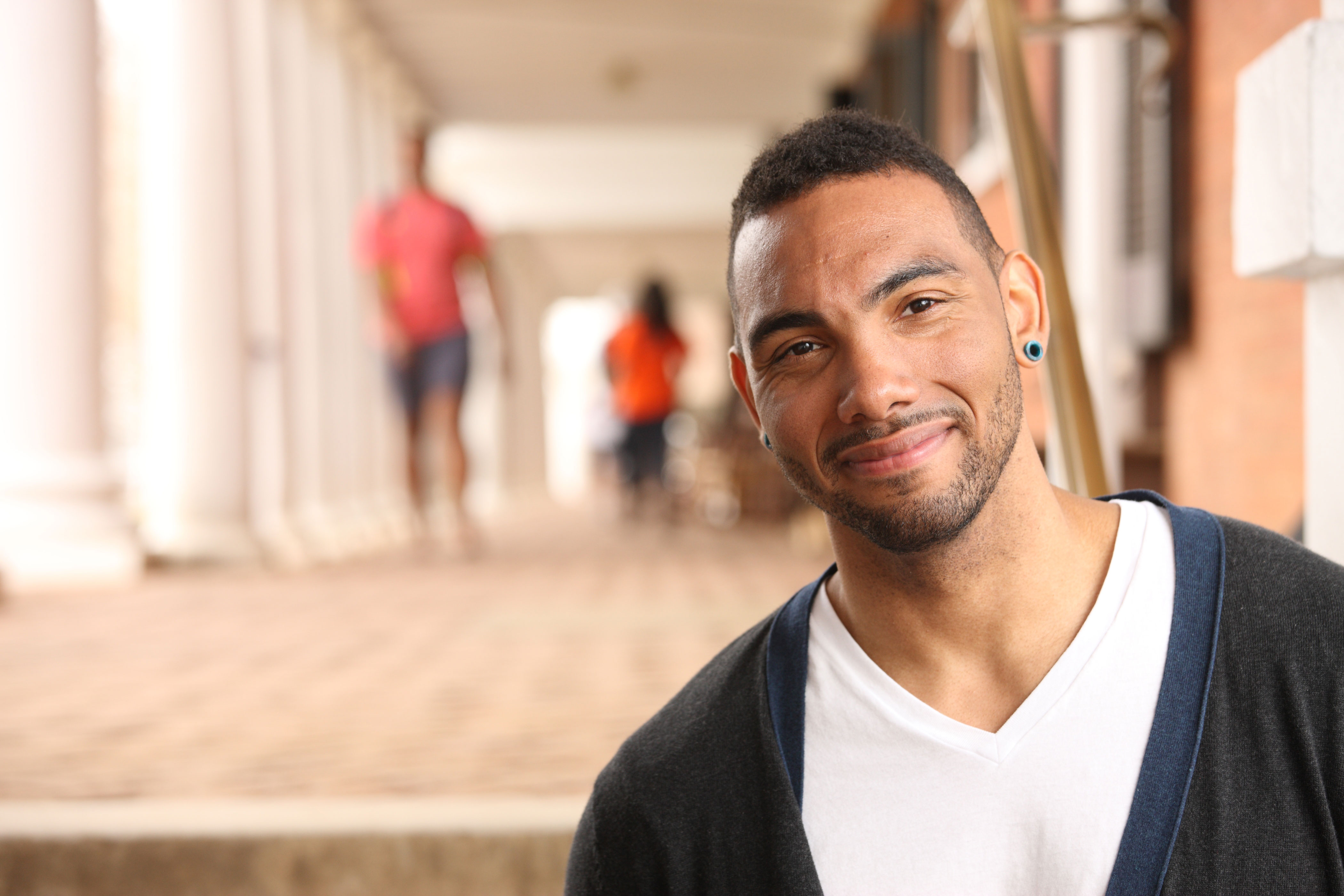 Michael Terrell embraces contradiction. Classically trained as a pianist beginning at age 4, he ran track and played football for the University of Virginia until a torn ligament in his knee put an end to his professional aspirations. Terrell prefers science to the study of history and English, yet he is deeply inspired by his family history and the achievements of his grandparents and great-grandparents.

“My grandmother was a sharecropper,” he said. “She told me one of things she looked forward to most in her life time was to see me graduate, and I am determined for her to realize this dream.”

He is on the verge of that realization. Terrell will graduate May 18 with a degree in systems and information engineering from U.Va.’s School of Engineering and Applied Science.

It has not been an easy road. Terrell graduated eighth in his high school class, but was not prepared for the rigors of University academics. “I was caught off guard,” he recalled. “I really didn’t understand how to study.” Having come from an almost entirely African-American high school, he did not feel comfortable with the culture on Grounds. Compounding his adjustment was the death of his father during his second month as a student.

It took concentration, perseverance and a talent for resolving challenges – skills he honed as an athlete and an avid video game player – not simply to succeed at U.Va., but also to shape the experience for his own ends.

“Michael is one of the smartest people I’ve met here,” said Mary Beck, assistant dean for student affairs in the Engineering School. “His struggle was not with content, but with adjusting to the system we use to deliver that content.”

Not surprisingly, during his first year Terrell turned to sports as a way to reaffirm his self-worth and balance the demands of his classes. In high school, he made all-state teams in track and all-regional teams in football and was a walk-on in both sports at the University. When he tore his ligament, though, he was ready to make preparing himself for a career his major focus.

“I saw that I could use my summers for internships and to better my opportunities for career development,” he says. “I thought a lot about my family – how I could be a better son and better brother and how having a productive career could help me be there for them with my father gone.”

Fortunately, Terrell had chosen a field – systems engineering – where his penchant for framing problems in ways they can be solved is an advantage. He spent two years interning at Norfolk Naval Shipyard and recently accepted a full-time position there after graduation. For his Capstone project, he worked with associate professor Garrick Louis on the Development Clearinghouse, a Web- and SMS-based communication platform for people and organizations engaged in community development.

Terrell views systems engineering as a way to build on his experience as an athlete. “Systems opens the door to project management, which is something I’d like to do in the future,” he said. “I would like to learn more about inspiring people to give their best.”

Terrell is the first to admit, however, that the transition from scholar-athlete to scholar was difficult. He went from being part of a team to having to be self-directed. His faith proved a source of strength. A devout Christian, Terrell takes a balanced approach to his development, placing a premium on spiritual as well as intellectual growth.

He also found an outlet for self-expression in his piano playing. “I enjoy the process of representing myself in others’ work and making it my own,” said Terrell, who is equally at home discussing the harmonic and technical nuances of Chopin and Beethoven as he is discussing the merits of video game composer Nobuo Uematsu.

Through it all, he was motivated by his belief that he was breaking barriers. He is the first in his family to become an engineer. “I feel that most people come here with a path they want to pursue,” he says. “I felt that I had to find my way, but it was well worth the effort.”

A Year We Will Never Forget: 2019-20 in Review END_OF_DOCUMENT_TOKEN_TO_BE_REPLACED

‘What Will You Carry With You?’ Remarks From UVA President Jim Ryan END_OF_DOCUMENT_TOKEN_TO_BE_REPLACED