Monica Wright Thrilled to Be Back at Alma Mater 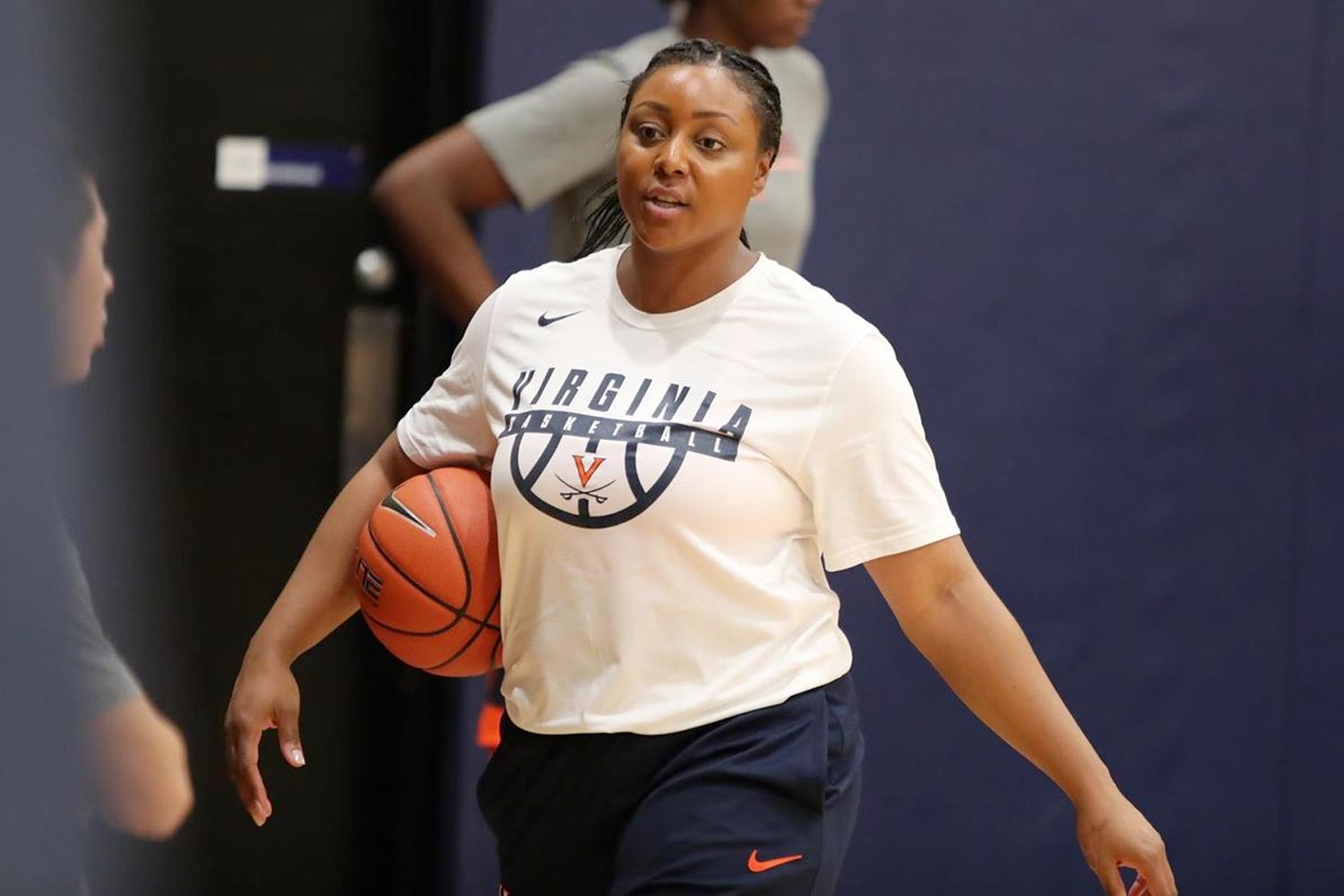 After graduating from the University of Virginia in 2010 with a bachelor’s degree in sociology, Monica Wright embarked on a professional basketball career that rarely allowed her time to return to Grounds.

When she stopped playing, Wright started coaching. Her schedule remained busy and did not include regular stops in Charlottesville.

In April, however, Wright came back to John Paul Jones Arena for an espnW-sponsored event designed to educate UVA women’s student-athletes about career opportunities.

At the time, she was happily employed as an assistant coach at Liberty University, where she’d joined head coach Carey Green’s staff in June 2018. Little did Wright know on that April night that, less than a month later, she’d have her own office in JPJ, her home during an illustrious college career in which she became the Cavaliers’ all-time leading scorer.

After her first season at UVA, head coach Tina Thompson decided to remake her staff, and on May 13 she announced that two new assistants – Wright and Walter Pitts – had been hired. They joined associate head coach Karleen Johnson and replaced La’Keshia Frett Meredith and Jama Sharp. Frett Meredith was a holdover from the staff of Thompson’s predecessor, Joanne Boyle.

When Thompson asked her to come in for an interview, Wright said, “I didn’t know what was happening. But I really was excited to see how she’s already had such a great effect on the program, and see her effect on the players. And so that really excited me about this opportunity.

“I absolutely love Coach Green, but having Tina Thompson at my alma mater, I could not pass up on that opportunity.”

In Lynchburg, Wright lived with Chelsea and Grace Mangino, sisters who also worked in Liberty’s athletic department. Their father, Larry Mangino, is director of scouting and recruiting for the UVA men’s basketball team. (Chelsea Mangino, director of operations for Liberty men’s basketball, is a former student-manager for Tony Bennett’s team at Virginia.)

Her colleagues at Liberty were sorry to see her leave, Wright said, but they supported her decision. “I think they were all like, ‘It’s kind of a no-brainer.’”

Wright, a 5-foot-10 guard, played for seven seasons in the WNBA, a league in which Thompson, who was inducted into the Naismith Memorial Basketball Hall of Fame last year, ranks among the all-time greats. Their WNBA careers overlapped, and so each was familiar with the other, even if Thompson and Wright didn’t know each other well.

“The WNBA circle is fairly small,” Wright said, “and I’m very close with a lot of her circle on the Seattle team she was on and then I ended up playing there. We have a lot of mutual friends.”

Wright is “very energetic,” Thompson said, “and that’s something that we were missing and we needed. And she knows this place like no other, because she has gone through the entire UVA experience as a student-athlete. So, there are just intuitive things that she knows already that are not embedded in [the rest of the staff] as of yet, because we’re still kind of learning.

“She’s very bright, and she brings a wealth of knowledge, but more than anything she’s proactive. Monica is the type of coach that hears that something needs to be done, and she does it, whether it’s her task or not. And sometimes I have to say, in a very positive way, ‘Slow down. We’re going to get there.’ But it’s what you need. This job is a grind, and you have to enjoy the hard work, and it’s who she is as a person. She’s hit the ground running in a great way.”

Wright, 30, grew up in Woodbridge and starred at Forest Park High School. At UVA, where she played for Hall of Fame coach Debbie Ryan, she was a three-time All-American. As a pro, Wright played not only in the WNBA, but in Poland, Turkey, Australia, South Korea and Iceland.

Injuries shortened her career. She’s had operations on both knees.

“It hurts with every step, but I loved being a pro up until the injuries,” said Wright, whose jersey number (22) was retired at UVA in November 2012. She still holds program records for career points, career scoring average and career field goals, as well as for the most games with at least 25 points. She ranks fourth all-time at UVA in career steals and 10th in career rebounds.

Near the end of her playing career, while rehabbing from one of her injuries, Wright joined the coaching staff at the University of Incarnate Word in San Antonio, Texas, as a volunteer. Coaching quickly became a passion she wanted to pursue.

At UVA, her new colleagues include Breyana Mason, director of scouting and video services for women’s basketball. Mason broke Wright’s scoring record at Forest Park High School and then had an outstanding career as a Virginia guard.

Mason said working with Wright “has been everything that I’ve imagined and more. Growing up in Woodbridge, Monica Wright was a name that I heard all the time, but until now, our interactions have been limited. Even though she’s only been here for a few months, Monica has already taken me under her wing. I’ve appreciated her mentorship and her willingness to share her previous experiences as a player and a coach with me. Every day, she comes into the office with a big smile and an infectious energy, and I am truly excited to have her back at UVA.”