With Most of the Same Genes, How Do Lizard Siblings End Up So Different? 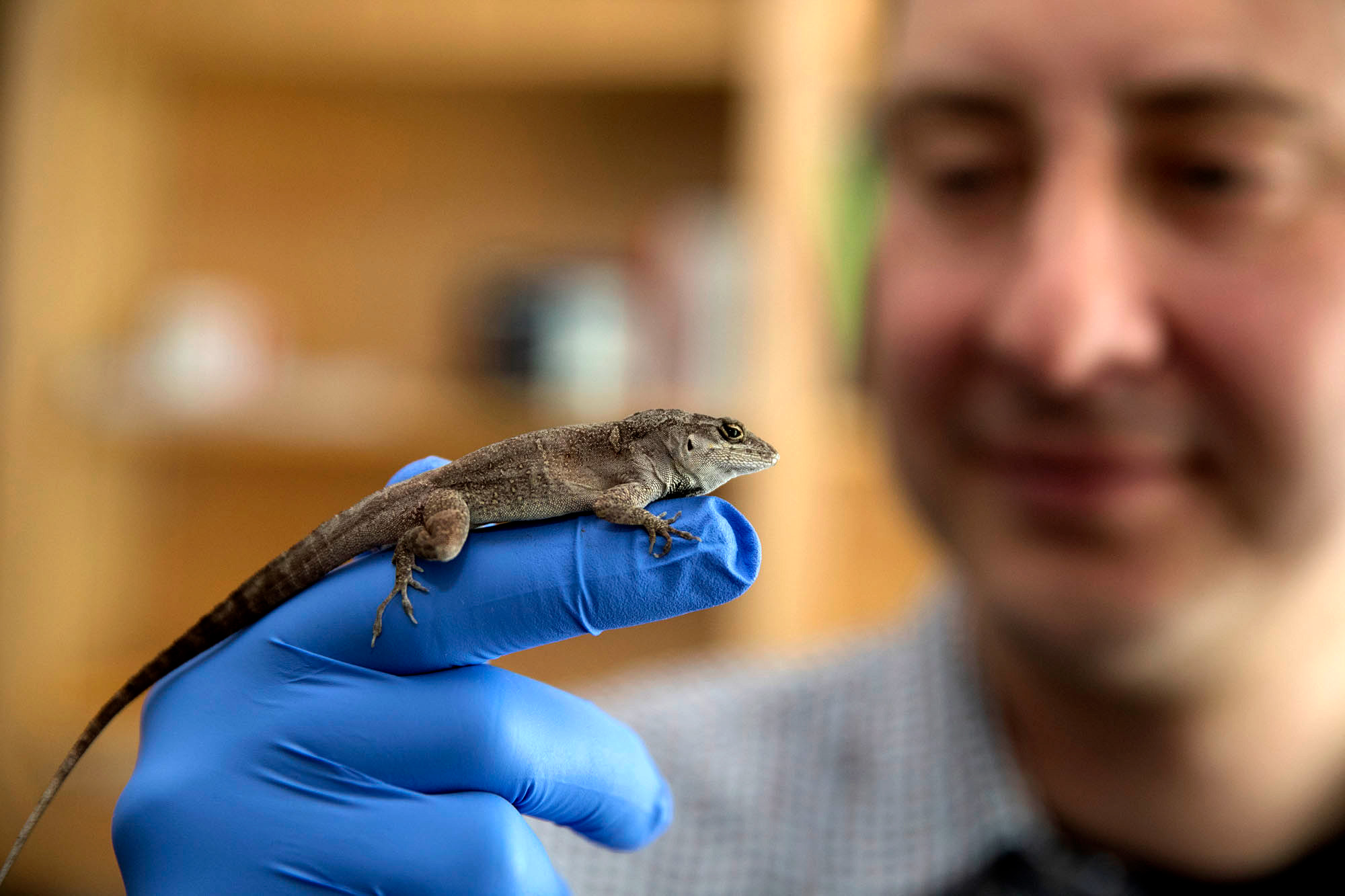 Robert Cox with a brown anole. He is investigating how and why males and females follow different paths during development. (Photos by Dan Addison, University Communications)

The brown anole, a prolific lizard native to Cuba and the Bahamas and now commonly found in many tropical and subtropical regions, is providing new clues to how genetics and hormones work together to shape the development of organisms.

University of Virginia evolutionary biologist Robert Cox is using the animal as a model to understand how the sexes differentiate despite sharing most of the same genes. In a new paper, published in the journal American Naturalist, he suggests that hormones, such as testosterone, play a key role in shaping gene expression in ways that are unique to each sex as an organism develops to adulthood.

“This is a new perspective in the sense that most evolutionary studies of hormones focus on their effects on the phenotype, or the observable characteristics of an organism, rather than the implications of the hormones for underlying genetic correlations,” he said. “We’re addressing a very general question – how are two dramatically different organisms, in this case male and female, produced from a single genome?” 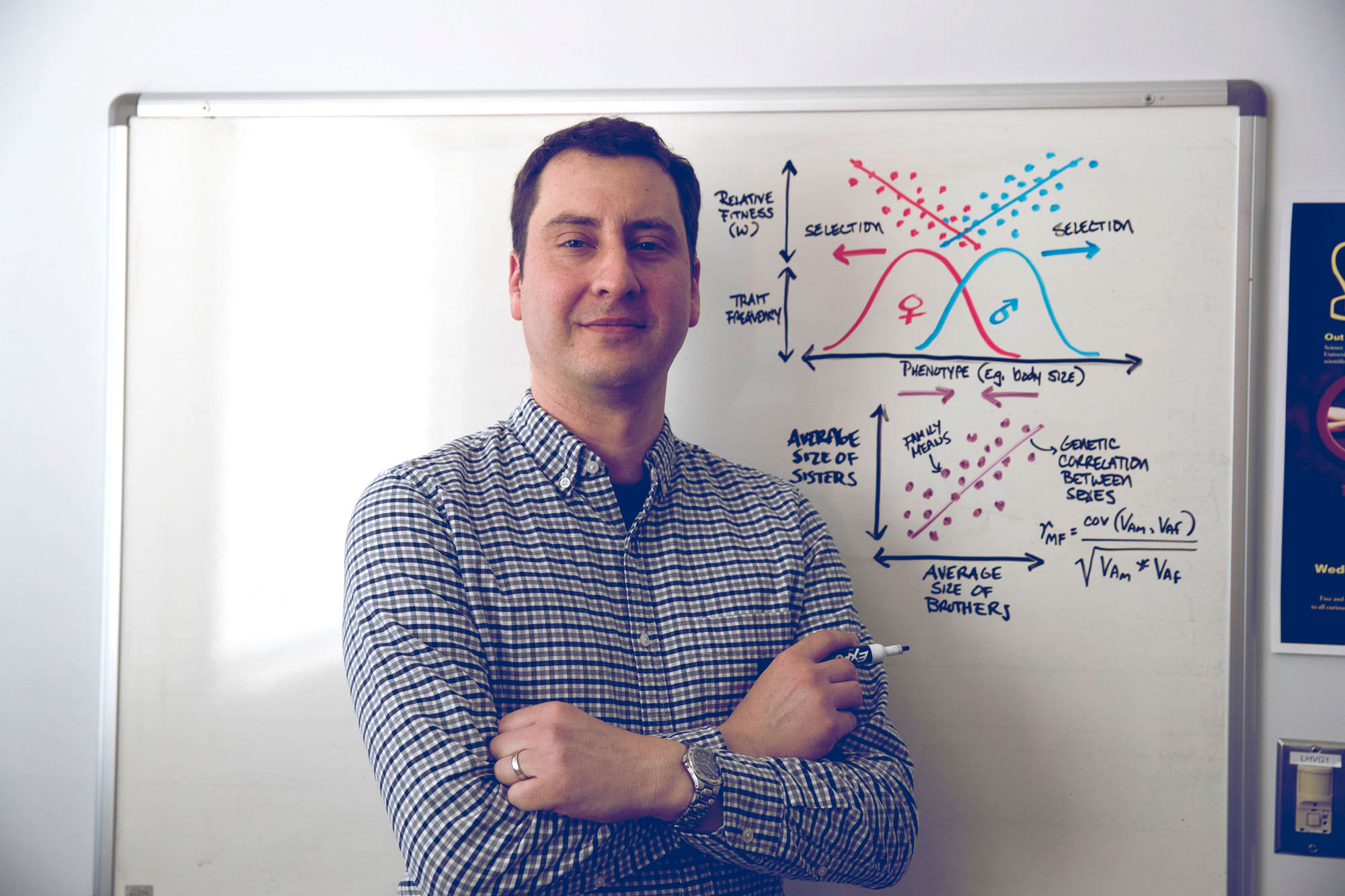 Evolutionary biologist Robert Cox is using the brown anole as a model to understand how the sexes differentiate despite sharing most of the same genes.

Cox uses the brown anole as a study model partly because it is extremely abundant in its native and introduced ranges and therefore provides his research group with the ability to track thousands of individuals and measure natural and sexual selection “in action” in wild populations. The populations he studies come from islands in the brown anole’s native range in the Bahamas and also from Florida, where it has recently invaded.

The species is compelling, he said, because the males and females hatch out of their eggs at the same size, but then go down different paths; during their yearlong development into adults, the males grow up to three times larger than the females. Cox said that their studies revealed an interesting genetic dimension to this pattern – whereas brothers and sisters strongly resemble one another early in life, this familial resemblance, or “genetic correlation between the sexes,” breaks down during development.

“This implies that brothers and sisters, who share many of the same genes, are doing something different with their genes as they mature,” he said. By measuring the expression of thousands of individual genes at different points in development, Cox and his collaborators found that sex differences in gene expression increased dramatically with age, as males and females diverged in size. “This shows that there is a huge amount of flexibility in what can be done to reach different endpoints from the same DNA blueprint,” he said.

“We also found that many of the patterns of gene expression that are typical of adult males can be induced by treating females with the hormone testosterone,” he said. “Putting the pieces together, we suggest that, by virtue of their widespread effects on gene expression throughout development, hormones such as testosterone play a key role in shaping the genetic basis of traits, which will in turn influence how these traits evolve in response to natural and sexual selection.”

Cox said there are several possible reasons why the males grow so much bigger than the females. One is that the male brown anoles are highly territorial, and large size is advantageous for fighting each other and for defending females. The other is that the females do not need large bodies because, unlike most other lizards, they don’t carry large clutches of eggs. Instead, they produce only one egg at a time, every seven to 10 days from April to November. Instead of putting their energy into growth, females likely put their energy into producing their single eggs as quickly as possible.

By tracking the survival and reproductive success of thousands of individual males and females in wild populations, Cox and his group are now working to understand how natural and sexual selection act differently on the sexes throughout development.

When Less Is More: How Harnessing the Power of Subtraction Can Add to Life END_OF_DOCUMENT_TOKEN_TO_BE_REPLACED