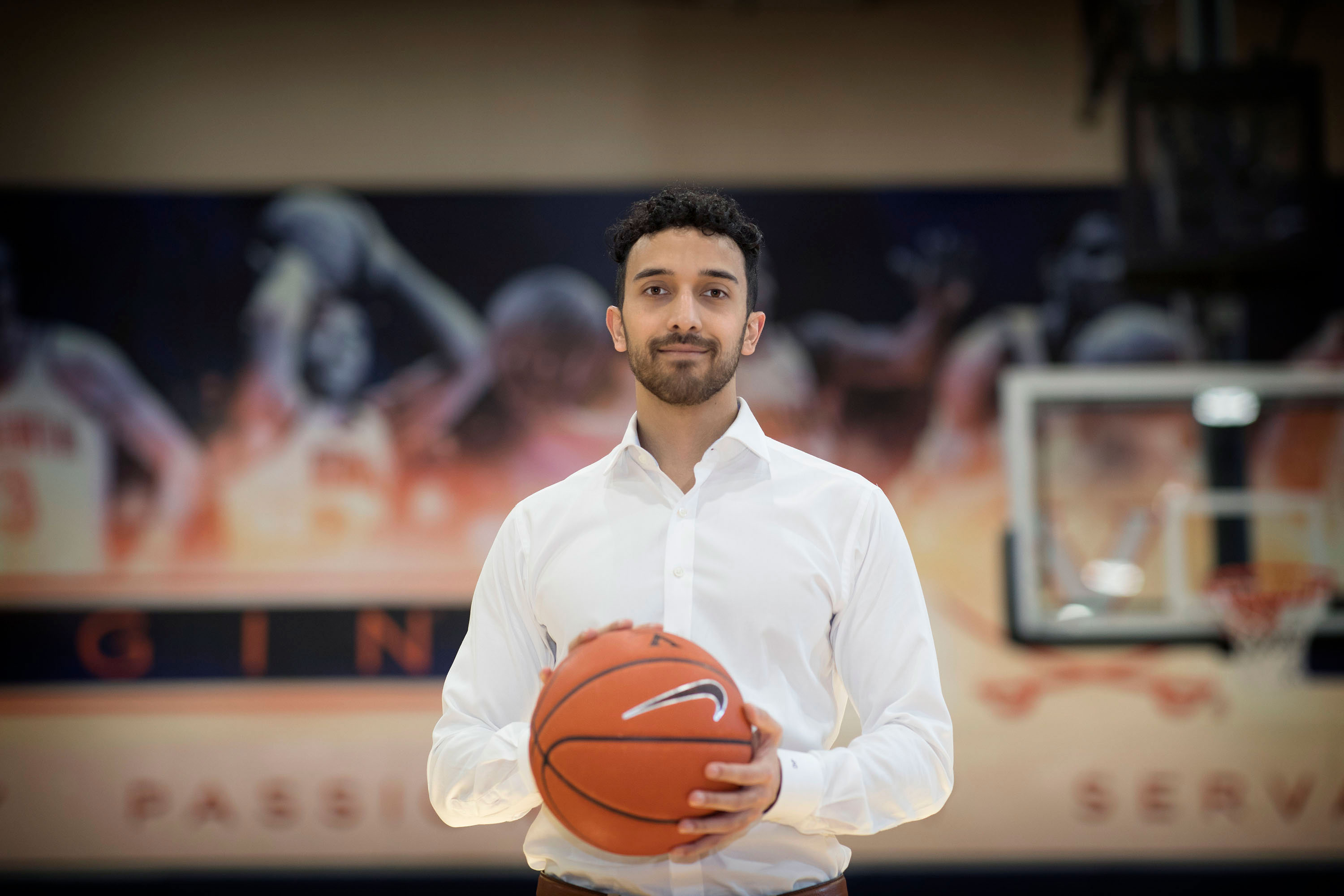 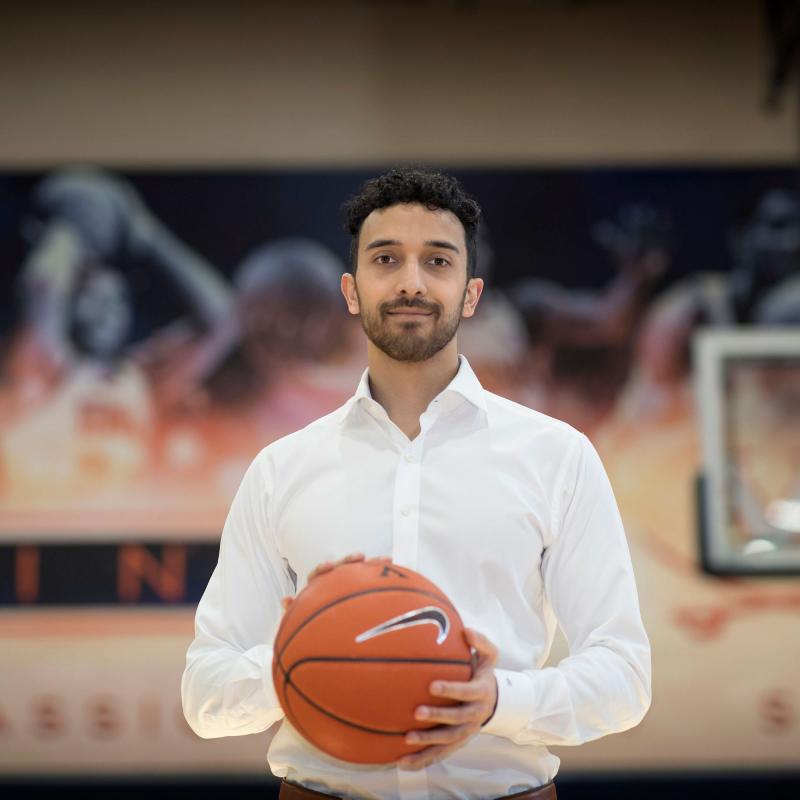 In a relatively short amount of time, UVA alum Johnny Carpenter has worked his way up from student manager to a position on the men’s basketball team’s coaching staff.

For Johnny Carpenter, the rise from University of Virginia student to Cavalier assistant men’s basketball coach – all before the age of 27 – started with something he and his twin brother, Mikey, lovingly refer to as “twintuition.”

Two weeks before arriving on Grounds, the Great Falls native wondered how he was going to find his place at UVA. Sports had always been a huge part of his life – he had been on the basketball, soccer, track and cross-country teams at St. Anselm’s Abbey School in Washington, D.C. However, he wasn’t quite good enough to continue at UVA.

Exactly at that moment, Mikey started reminiscing about his experience as a student basketball manager for Johnny’s team.

“I was like, ‘Man, how cool would that be to do in college?’” Johnny Carpenter recalled. “Most people would think rebounding and wiping up sweat is lame, but I actually thought it could be cool.”

Wiping up that sweat – one of many not-so-glamorous managerial duties – has led to a career Carpenter never thought possible.

When No. 1 seed UVA begins play in the NCAA Tournament against Gardner-Webb University on Friday afternoon, Carpenter, now the team’s director of player personnel, will be on the Cavalier sideline, just a few feet away from head coach Tony Bennett, helping out however he can – just as he has for the better part of the last decade. 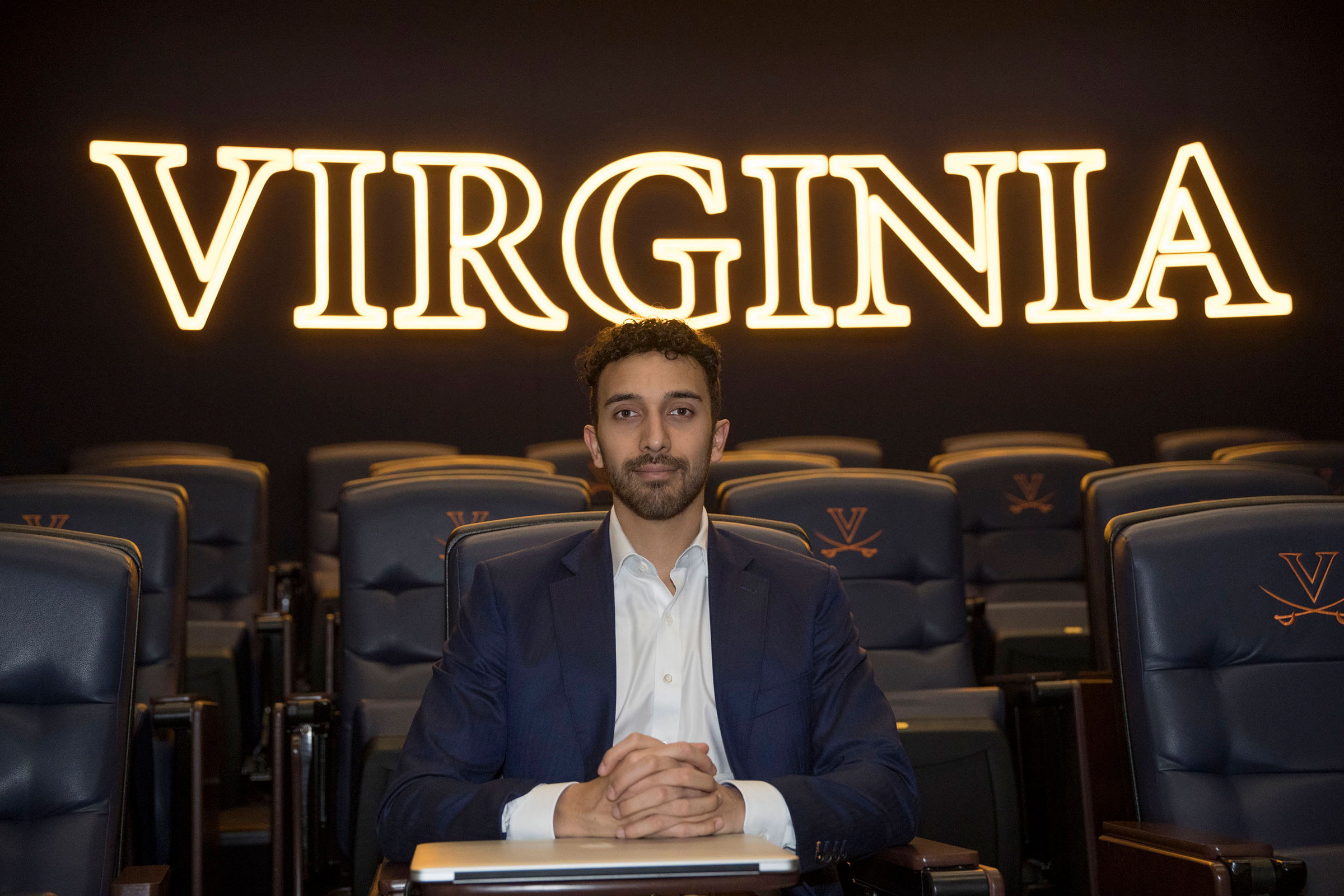 The smile that can usually be found on Carpenter’s face tells you all you need to know about his chosen profession.

“Coaching was always like a dream,” he said, “but I literally thought it was impossible to get into. I had no idea how to do it.”

Early in the 2009 fall semester, Carpenter – in his first week as a UVA student, with the conversation with his brother still fresh in his mind – spotted a sign-up table for aspiring student basketball managers while walking outside of the Observatory Hill Dining Hall and stopped to chat.

During that meeting, Bennett – who was just starting his first season as coach – popped in to introduce himself.

“He said managers are some of the most important people for a successful operation,” Carpenter said. “He said it’s a thankless job, but he was like, ‘You will be treated well and with respect.’”

“It was cool to hear about being a part of something bigger than yourself,” he said. “I loved that.” 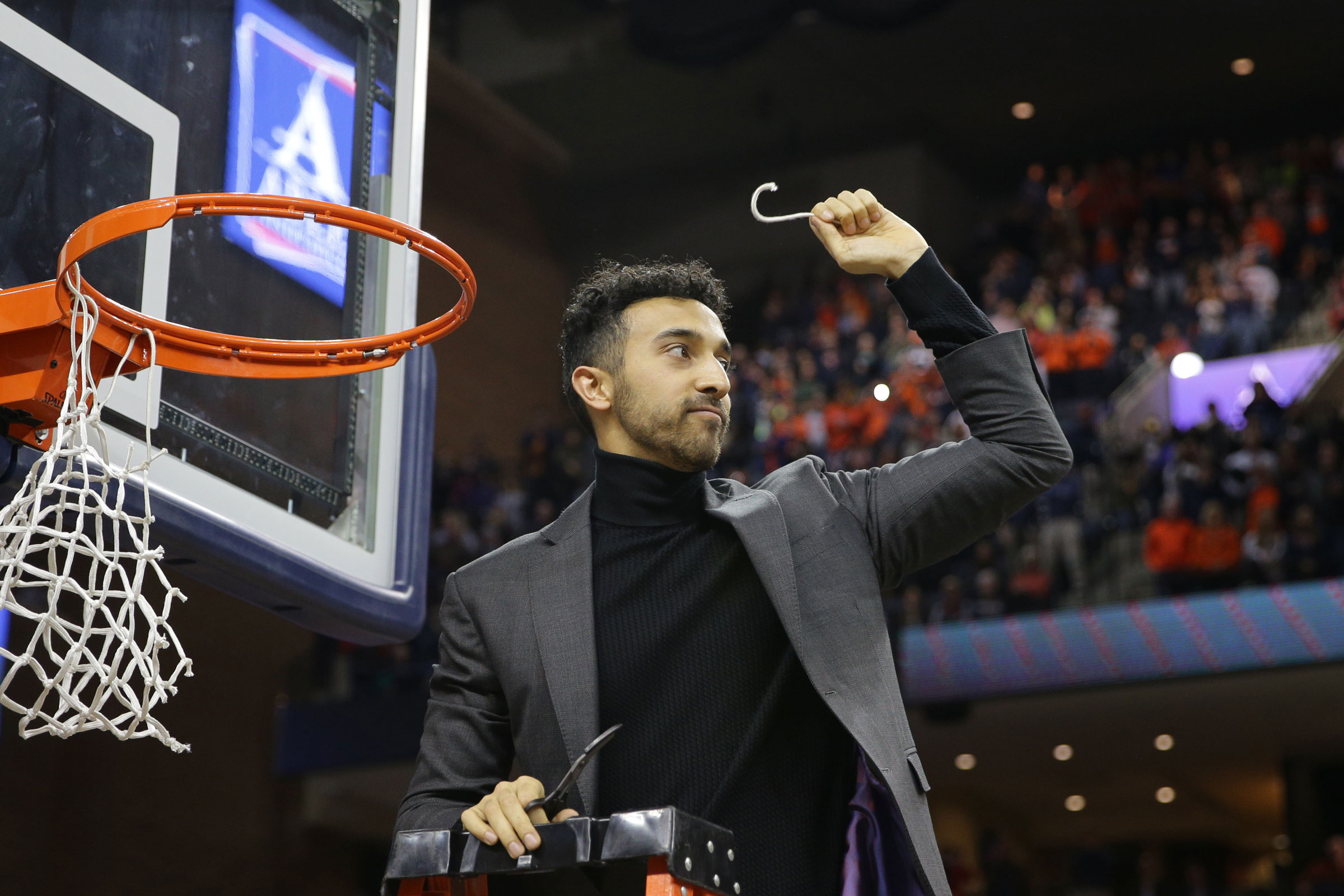 Carpenter got to help cut down the nets after the Hoos won a share of this year's ACC regular season title. (Photo by Matt Riley, UVA Athletics)

Carpenter immersed himself in the position. He took particular pleasure in running shooting drills and rebounding for players like Mike Scott and Sammy Zeglinski. On road trips, his duties included making sure players stayed hydrated, nourished and went to bed on time.

A year later, Mikey, a year behind Johnny at UVA (their parents had separated them when they were young so they could have different life experiences) joined the fun.

“They were just both intense workers – hungry to help out and serve the program in any way,” Bennett recalled.

Johnny was especially eager to become a manager/walk-on player in the mold of current UVA student Grant Kersey, who, earlier this season, rose to stardom after being allowed to suit up.

“I was trying to be Grant Kersey before Grant Kersey,” said Carpenter, grinning. “I wasn’t quite good enough to crack those rosters, but I had fun helping out in practice on the scout team or wherever I could.”

In his third year, Carpenter, who majored in foreign affairs, realized he wanted to pursue basketball as a career.

“I started leaning toward coaching, because coaching is teaching,” he said. “You’re just using a different platform to teach kids about the big picture through a sport.”

During his last year at UVA, Carpenter applied for various operational positions and graduate assistant jobs around the country.

Eventually, former UVA women’s basketball coach Joanne Boyle got wind that Carpenter, who had won the Bob Goodman Award for service to the UVA athletics department, was looking to get into coaching. Boyle, who had a vacancy on her staff, hired him as a graduate assistant.

Right around that time, Carpenter had also learned from former women’s player Lexie Gerson about a master’s program at Curry School of Education and Human Development in which he could do a concentration in intercollegiate athletics.

For Carpenter, it was a total win-win.

That September, Carpenter heard UVA alum Rick Carlisle, the coach of the NBA’s Dallas Mavericks, speak at Fall Convocation ceremonies and felt moved to reach out to him.

“I had been reading a book at the time that literally said, ‘Take a bold risk – make that phone call, write that letter,’” Carpenter said.

So Carpenter wrote Carlisle a letter, telling him how much he had enjoyed his speech, never really expecting to hear back.

On Christmas Eve, nearly three months later, Carpenter’s phone rang and a 214 area code popped up on the screen. It was Carlisle.

Carpenter and Carlisle clicked right away and stayed in touch.

That summer, when an assistant video coordinator job opened for the Mavericks, Carlisle – with Boyle and Bennett’s full endorsement – hired Carpenter.

The NBA, unlike the NCAA, doesn’t have rules restricting what specific coaches can and can’t do, so Carpenter learned a little bit of everything with the Mavs. He got to travel with the team, put stars such as Dirk Nowitzki through workouts and go over video with Carlisle and assistant coaches. He even got to converse with Mavs owner Mark Cuban.

“[Cuban] was always around the team and it was just really cool to see someone who cared so much and was so devoted,” Carpenter said. “He would come into the video office and suggest things and he always had amazing ideas and treated everyone great.” 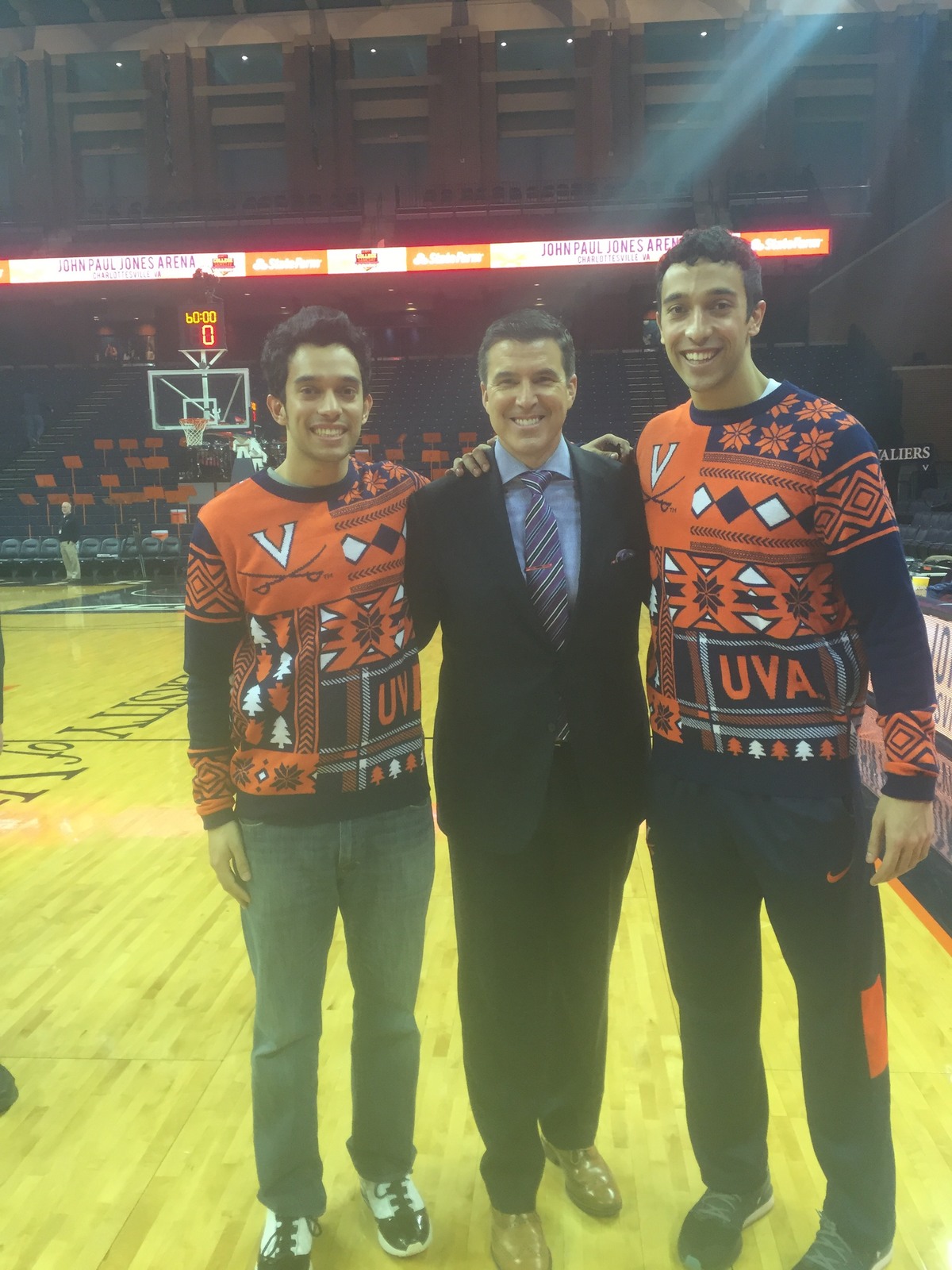 Carpenter thought he would be with the Mavs for awhile, but when assistant coach Ritchie McKay left Bennett’s staff to take the head coaching job at Liberty University in April 2015 (and took staffer Brad Soucie with him), Bennett came calling with an offer to return to Charlottesville.

“Being able to work for [Bennett], after seeing him as a manager, and seeing the impact he’s had on so many people’s lives, he was somebody who I knew would be a dream to work for,” Carpenter said. “He’s just an unbelievable person. He works so hard, but understands the whole big picture of life. And the college age group appealed to me because you can build lasting relationships with the guys.”

Carpenter came aboard as technology assistant – a role he held had until getting promoted to his current position after last season. As the director of player personnel, Carpenter helps with scouting, recruiting and player development. Frequently, he edits videos for players that are aimed at showing them specific things they need to work on.

“He’s young enough where he can relate to the guys – he understands social media a lot better than I would,” said Bennett, smiling. “He’s well-liked and is just a student of the game. He’s just continuing to grow and expand. I like guys like that, who are hungry.”

“He’s always available, breaking down film and watching it with the guys,” Key said. “He breaks down every little thing – shooting, stances on defense, everything. He’s definitely a big part of this program.”

UVA assistant coach Jason Williford is effusive in his praise of Carpenter.

“He’s super-bright,” he said. “Whatever he wants to do, he’s going to be successful in. He’s as sharp as a tack, works extremely hard, has a tremendous work ethic, and he loves this place, too. He is a Wahoo through and through. He bleeds it. I’m just glad he’s helping us and is with us.”

Carpenter, whose brother now works for Managers on a Mission, a non-profit sports apparel company, hopes to keep climbing the coaching ladder.

“I want to dream big and one day be a head coach,” he said, “but in this industry I feel like there’s a pressure to keep moving up and almost like skipping steps in hopping from here, hopping to there. My goal is to build a really strong foundation.”

Along the way, he knows he can always rely on that “twintuition.”

“We are,” said Carpenter, breaking into a wide smile, “on the same brain wave.” 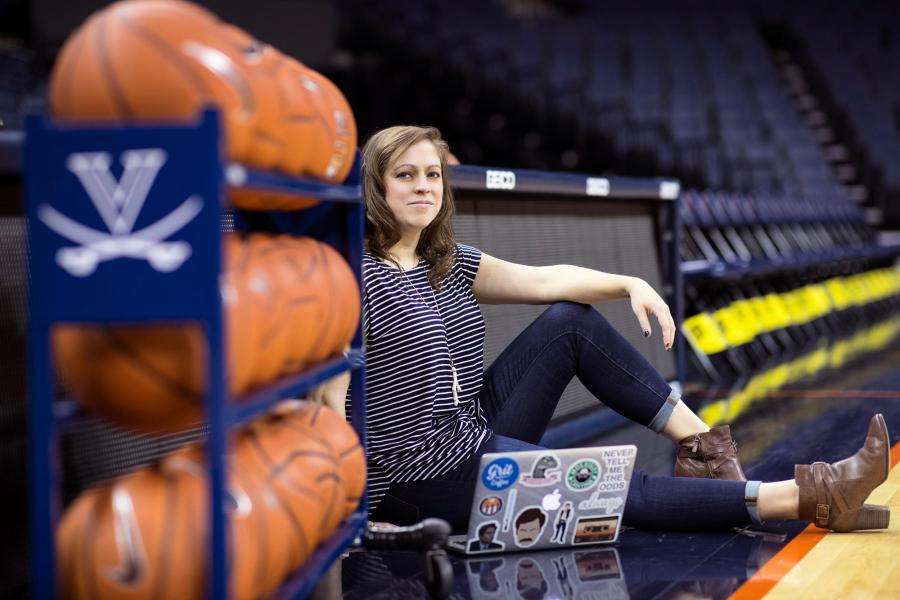 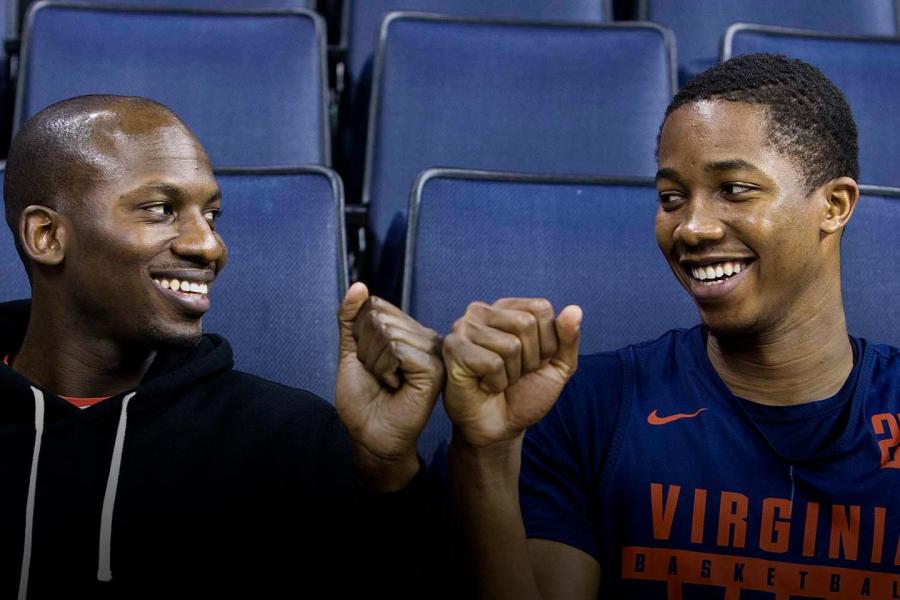 A Tale of Two Mamadis: How These UVA Basketball Stars Forged a Brotherhood 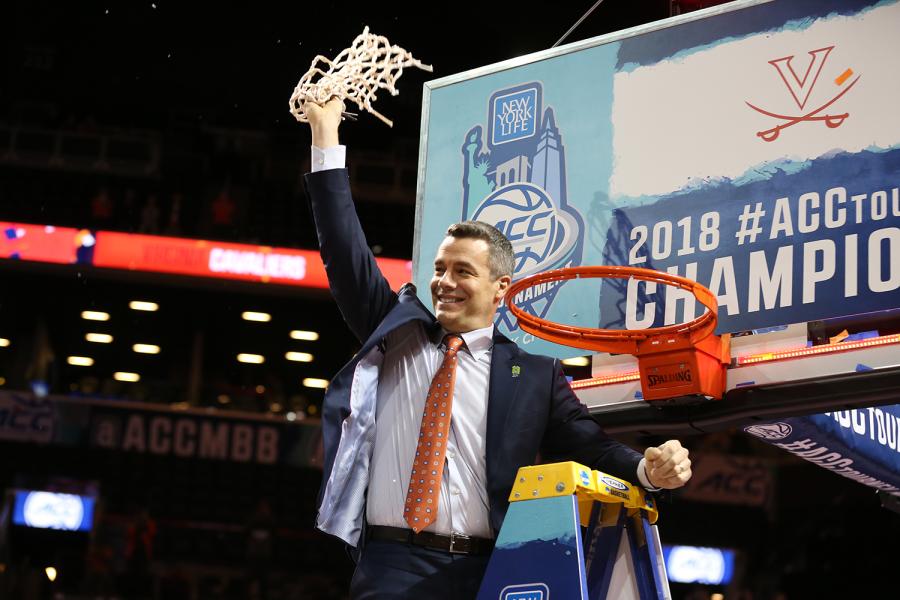