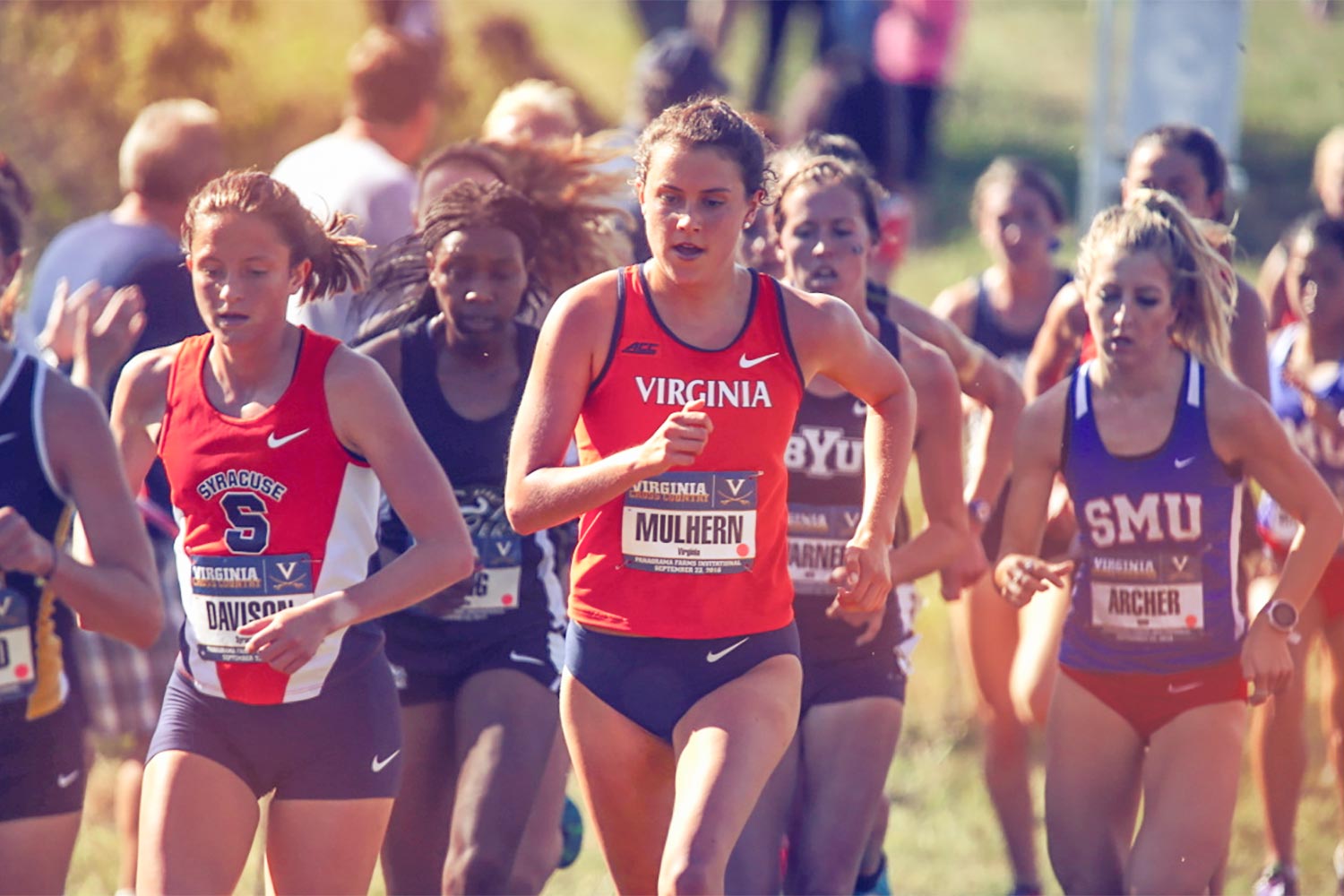 She’s been able to run this summer without pain in her surgically repaired left foot, and for that Emily Mulhern is immensely grateful. The five months of restricted activity she endured while in recovery were torture for this University of Virginia third-year student.

“Cross-training can just become so lonely and hard when all you want to do is go out and run,” Mulhern said.

What’s made this summer especially memorable for Mulhern, though, has nothing to do with training for her third season of cross country at UVA. She’s been working at the Fried Center for the Advancement of Potential in western Albemarle County.

The Fried Center is a non-profit whose mission is to provide physical therapy and personal-training services to people with disabilities. Some are from nearby Innisfree Village, a residential community for adults with intellectual disabilities.

Mulhern and her fellow interns took an independent study, sponsored by UVA kinesiology professor Martin Block, that Luedeka taught in the Curry School of Education. The top students in the course, Luedeka said, were offered paid internships at the Fried Center, where Mulhern has distinguished herself in a challenging environment.

“These are the most complex patients that she’ll ever get to deal with,” Luedeka said, “in terms of they can’t give you a real solid medical history when you’re talking to them and can’t really describe the locations of their symptoms and pain.

“We have interns now that have been there over a year with me, so Emily is relatively new. But she’s done a good job integrating herself into that culture.

“She’s learned a lot about functional exercise that she’s been able to apply to her own training. So it’s kind of been a mutual symbiotic-type relationship that’s been really good for her.”

For those who use the Fried Center, Mulhern said, interns help promote physical activity and, when needed, “We try to correct a lot of their orthopedic problems. A lot of them have scoliosis. One girl had severe scoliosis, and we actually were able to correct it, just from stretches and correcting the muscle imbalances, so she didn’t have to get surgery or anything like that. So overall it’s a positive thing for them.”

Mulhern grew up in Ijamsville, Maryland, near Frederick. (Her parents now live on the Virginia side of the Potomac River, in the small town of Lovettsville.) At Urbana High School, she won seven state titles as a distance runner, including three in cross country, “but Maryland was not nearly as competitive as other states,” Mulhern said.

“I had kind of a unique high school experience. Even though I wasn’t really that great, I wanted to be really great, and so I always had this vision to get to college and [be part of a] team that’s excelling at such a high level. And that’s the biggest reason why I came to Virginia: I knew I would be coming on in the back and be able to learn from the girls in front of me.

“I never expected anything out of my first year. I just simply wanted to learn and absorb as much as I could. And so the fact that I had the season I had was the biggest surprise, and it just made it that much better.”

Mulhern’s impact was immediate as a first-year in 2015. She placed 15th at the ACC cross country meet to earn all-conference honors and help the Cavaliers win the team title for the first time since 1982. Two weeks later, she finished 12th at the NCAA Southeast Regional. At the NCAA championships that fall, Virginia placed 15th.

Last fall, Mulhern placed 21st at the ACC meet and eighth at the NCAA Southeast Regional. For the team, however, 2016 was a “disaster,” said Todd Morgan, head women’s cross country coach. “Last year I think everything that could have gone wrong, went wrong.”

A year after capturing the ACC title, the Wahoos finished 10th at the conference meet and failed to qualify for the NCAA championships.

“I was definitely spoiled my first year coming in here,” Mulhern said. “I really wasn’t that great of a runner in high school, so when I got here [a UVA assistant] said to me, ‘Emily, don’t wake up, because this is quite the dream you’re having.’

Her physical woes compounded her frustration. During the indoor track season, pain in her left foot slowed Mulhern, who had to take a break from running after competing in the 3,000 meters at the Scarlet and White Invitational in Boston in early February.

“I had stress on that bone, but not a stress fracture, per se,” Mulhern said. “So I was off of it for about a month.”

That didn’t solve the program. In the shower one day, Mulhern pivoted on her left foot and “heard it pop,” she said. “And that’s when I acutely fractured it. At that point there was no question about what to do, and so I went ahead and got surgery [in March].”

Mulhern, who as a freshman finished 10th in the 5,000 meters at the ACC outdoor meet, was unable to compete last spring. Not until June was she cleared to resume running.

“When I was recovering from the surgery itself, I couldn’t do anything, so that was kind of unique, because I don’t think there’s ever been a point in my life when I haven’t done anything [physically],” Mulhern said. “Then it was really nice to start swimming again, but that became really [monotonous] after a while, and I really craved running.”

She’s become a cornerstone of the Cavaliers’ program. Of his 19 runners, Morgan said, 11 are new to UVA this season: 10 freshmen and Frances Schmiede, a graduate transfer from Yale. Morgan expects Schmiede, Mulhern and senior Megan Rebholz to lead the way.

His returning runners haven’t forgotten the disappointment of last fall, Morgan said. “Our goal is to use it as a motivator. Absolutely.”

Mulhern, whose fellow students at the University include two of her cousins, will have another season of eligibility left in cross country after this one. Whether she’ll be back in Charlottesville next fall has yet to be determined. She came to UVA with numerous Advanced Placement credits and is on track to graduate in three years.

She wants to study physical therapy in graduate school, and UVA doesn’t offer such a program. At this point, her plans for 2018-19 are uncertain, Mulhern said. “It’s so dependent on how this year goes and how my application for PT school goes. I just took the GRE, so I am checking off the boxes, but I don’t necessarily know what I’m going to do next year.”

For now, she’s focused on 2017-18. Mulhern will figure prominently this fall as the ’Hoos try to return to national prominence.

“She’s one of my leaders,” Morgan said. “She’s a quiet leader, but she’s definitely a hard-nosed kid.”

A Year We Will Never Forget: 2019-20 in Review END_OF_DOCUMENT_TOKEN_TO_BE_REPLACED

‘What Will You Carry With You?’ Remarks From UVA President Jim Ryan END_OF_DOCUMENT_TOKEN_TO_BE_REPLACED