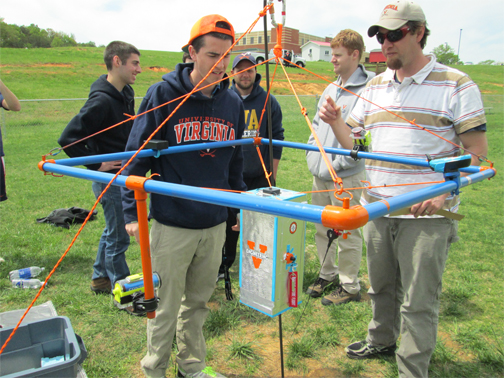 The Spacecraft Design Team from the University of Virginia School of Engineering and Applied Science is among 10 teams in the U.S. selected by the National Aeronautics and Space Administration to design, build and fly a science experiment aboard a suborbital flight vehicle.

The U.Va. team – the only one chosen from Virginia – will fly its experiment on a NASA high-altitude balloon platform floated 23 miles into the stratosphere next September in New Mexico. The flight will expose the payload to space-like conditions and result in valuable data that will be used by NASA researchers to validate computer models for predicting radiation produced in the atmosphere by cosmic rays.

Until then, all 10 college teams selected will work with NASA researchers to prepare for their flights.

The U.Va. team, part of the spacecraft design class taught by Christopher P. Goyne, associate professor of mechanical and aerospace engineering and director of U.Va.’s Aerospace Research Laboratory, will use the “JefferSat cubesat” – a small satellite the size of a loaf of bread – to measure cosmic ray activity high in the atmosphere over New Mexico. Cosmic rays can be a considerable source of radiation exposure for passengers and crew during air and space flight. To minimize the health effects of this exposure, it is important to measure and predict radiation levels in the atmosphere.

The class has been involved in a four-year project with the ultimate goal of designing a spacecraft that would be capable of orbiting the earth. The focus of the class’s research the last two years was to prove the viability of a satellite that uses a smartphone as both a flight computer and a sensor capable of capturing data during orbital flight.

The team devoted its first year of effort to developing a broad overview of how to demonstrate the use of smartphone technology, according to Goyne. The second year, the class designed and sent up a high-altitude weather balloon to test some of the components and systems that might fly on a satellite in the future. The balloon was launched in April and rose to 64,000 feet with GPS and altitude tracking.

As a follow-on to the new NASA high-altitude balloon flight, the final stage of the project will be to launch and operate an orbital flight.

“The team’s success over the last two years is directly related to being awarded an opportunity to participate in the NASA project,” Goyne said. “I have mostly been a mentor to the students as they worked through conceptualizing, planning, designing and building the experiments. They self-organized and have managed to continue the mission from one semester to the next.”

The flight is sponsored by NASA’s Undergraduate Student Instrument Project Educational Flight Opportunity program and will take place using the High-Altitude Student Platform, operated by Louisiana State University and NASA Wallops Flight Facility. The major goal of the program is to foster student excitement in an aerospace career path and to help address workforce development issues in this area. The NASA award of $75,520, including $25,520 cost-sharing from U.Va., builds on previous seed funding from U.Va., Lacy funding for experiential learning and the Virginia Space Grant Consortium.

What Is the ‘4th Side’? END_OF_DOCUMENT_TOKEN_TO_BE_REPLACED