Navy Secretary Challenges Graduates to Become the Next ‘Greatest Generation’ 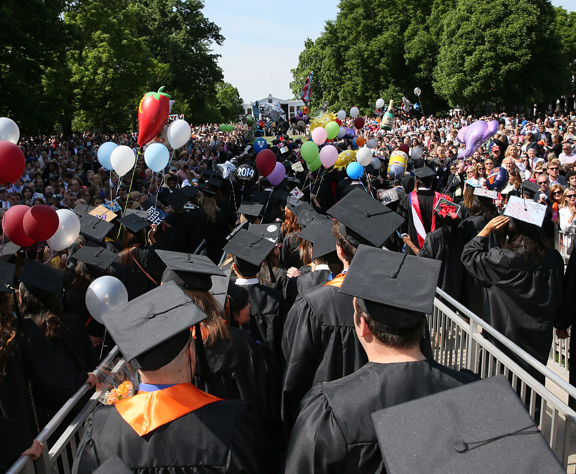 U.S. Secretary of the Navy Ray Mabus asked the University of Virginia’s Class of 2014 at Final Exercises on Sunday how they would serve others and their country as they proceed with their lives after leaving U.Va.

Addressing a crowd of more than 30,000 – parents, families, friends and about 6,300 graduating students – Mabus, the commencement speaker, challenged the graduates to become “America’s next ‘greatest generation,’ lauded for your accomplishments 60 or 70 years from now.”

“The ‘greatest generation’ changed the world,” he said, referring to those who fought in World War II and then went on to make this country the strongest in the world. “They made it better – and you can, too.”

As the sun streamed down and a mild breeze ruffled the leaves of the trees edging the Lawn, U.Va. President Teresa A. Sullivan described the values U.Va. graduates take with them that position them to change the world: “Honor, service, diversity, leadership, accountability for yourself and your peers.”

Sullivan also described some of their accomplishments: 95 students who earned their bachelor’s degrees in three years and four who did so in only two years; two Rhodes Scholars; two Goldwater scientific research scholars; an Astronaut Scholar; a recipient of the Davis Prize for Peace; two Beckman Scholars and a Beinecke Scholar, and at least one Fulbright Scholar, with several more still being considered for the program. Four undergraduate degree candidates received University Awards for Projects in the Arts and 36 received Harrison Undergraduate Research Awards. About 60 percent of the graduates engaged in some kind of research while pursuing their studies. More than 27 percent of those graduating participated in some form of education abroad.

She also mentioned one thing that stands out about the Class of 2014: They would always be special to her, she said, because she and they were first-years together, referring to her inaugural year in office in 2010.

Sullivan and George K. Martin, rector of the Board of Visitors, wore white kente stoles with orange and blue stripes, having received them in a special recognition the night before at the Office of African-American Affairs’ “Donning of the Kente Cloth” ceremony.

The students showed their excitement by wearing extravagantly decorated mortarboards and carrying an array of balloons – there seemed to be no shortage of helium in Charlottesville this weekend. The balloons were not just orange and blue, not just exclaiming “congratulations,” but also spelled out 2-0-1-4, and depicted animals and animated characters, champagne bottles and American flags. Students graduating from the Frank Batten School of Leadership and Public Policy held balloons designed like the globe, with blue seas and green continents – and of course, a “V” for Virginia. When television cameras panned the rows of black gowns, small groups of students caught on, bunching together and yelling, “Thanks, Mom and Dad!”

“Today, you receive your diplomas,” Sullivan said. “Tomorrow the knowledge and habits of mind that you acquired here will become tools for understanding the world to which you go.”

Mabus asked the class to use those tools to make a difference in life and do something that might yield results they’ll never see. “Do something that will last,” he urged them.

“Although we need skilled and dedicated people protecting our country, the military is far from the only way to serve. There are other quiet acts of heroism that go on around us every day,” he said, mentioning people like neighbors, teachers and nurses who go beyond their normal duties to help others. The latter two groups, he added, are not paid enough, to which cheers erupted from where the graduates from the Curry School of Education and School of Nursing were sitting.

It was not the first time Mabus had walked down the Lawn. That visit was another historic occasion: in 1989, as then-governor of Mississippi, he came to U.Va. to participate in U.S. President George H.W. Bush’s education summit, which brought together the governors of all 50 states.

It’s one thing for President Sullivan to tell the graduates, “You have earned your degrees at a university that stands as a national and global symbol of excellence in public education.” But it had an added cache coming from someone in Mabus’ position.

“The fact that he picked U.Va. for our meeting shows the regard our nation’s leaders have for this university and its place in American history,” said Mabus, who has been the top civilian official of the U.S. Navy since 2009.

Both Sullivan and Mabus acknowledged the efforts of all those who supported the students, from faculty and staff to their parents, grandparents and others. Some of those parents and families had made one more effort; to get seats on the Lawn close to the center procession aisle, they had arrived at 6:30 a.m. when the air was still chilly.

“You wouldn’t be here if it wasn’t for a whole lot of other people,” Mabus told the graduates. He encouraged them to give their parents and families extra hugs – “You can’t have too many hugs. The same goes for ice cream.

“It’s also important to remember those who, in a much larger sense, make days like today possible. I’m talking about those who have worn and are wearing the uniform of our country, those who stand the watch every day to keep us safe and secure.” Mabus mentioned that military personnel come from nearly 1 percent of the population – “one percent to protect the other 99 percent of us.”

He mentioned illustrious military leaders who had attended U.Va.: Rear Admiral Richard Byrd, who was a pioneer of naval aviation and explorer of both Poles; and, during World War II, Fleet Admiral William “Bull” Halsey Jr. and Alexander Vandegrift, the 18th Commandant of the Marine Corps.

Those serving today should also be counted as heroes, he said. With Memorial Day coming next weekend, he asked veterans and those serving in the military to stand for a round of applause.

He said there’s nothing wrong with making money and being successful – to the applause of a certain school of students – but “I have never seen a hearse with a U-Haul,” he pointed out. (When Martin introduced Mabus, he drew applause from the Curry School of Education graduates, mentioning that as governor Mabus had given the biggest salary raises in the country to his state’s teachers.)

“I hope that you will do something for yourselves that you don’t see the results of the next day or maybe ever.” Mabus said his father, a tree farmer who was part of the greatest generation, did not cut down any trees in the last year of his life, though that was how he had made his living. Instead, he planted thousands of seedlings, knowing he would never see them grow and mature.

“Cherish your day. Cherish your graduation; you’ve earned it. But when this day is over, you need to go out and earn some other things that will be cherished long after you live.  Tomorrow – ask yourself, what trees will I plant?”