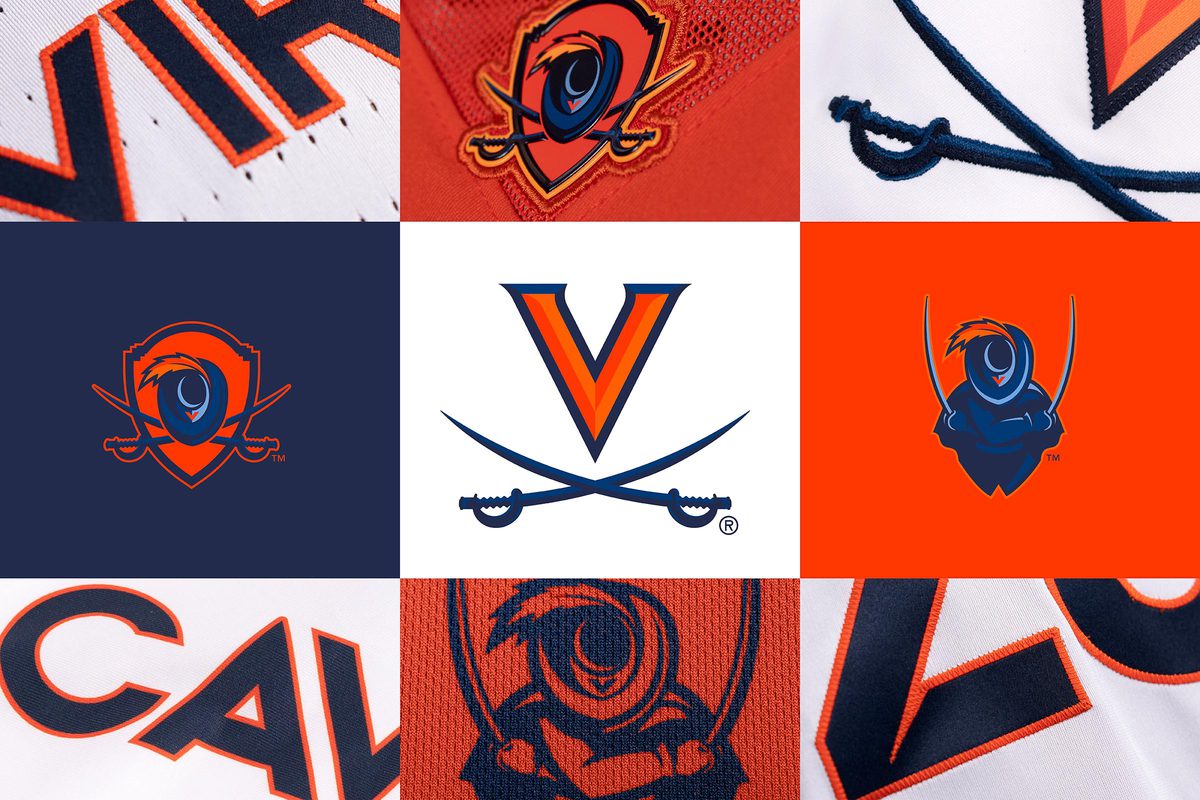 Carla Williams visualizes the day when COVID-19 no longer poses a danger to the community and UVA’s director of athletics can see students, alumni, faculty, staff, fans and others cheering on the Hoos at sporting events across Grounds.

It is with that glimpse into the future in mind that UVA Athletics, capping an 18-month project with Nike, released refreshed marks and logos on Friday.

“It is important to acknowledge the challenges we are currently facing,” said Williams, referring to the global pandemic, “and we considered delaying the launch of the new brand identity system.

“However, as the athletics department prepares for the future with updated marks and uniforms, we felt the time was right to share our new brand identity and express what we hope our future will be, which is to be bold, creative, innovative and competitive.”

Combining the existing color scheme with a bold new approach, updates were made to the V-Sabre mark and two new secondary marks were created.

The V-Sabre, which will remain the primary mark and continue to be featured prominently on uniforms, merchandise and throughout athletics facilities, has been enhanced by adding a beveling effect to the middle of the V and to the sabres. Slight adjustments were made to the sabres to improve the visibility of the logo, particularly in broadcast applications.

The design of the new Virginia Cavalier mark, inspired by the V-Sabre, is presented in such a way that invites everyone to be a Cavalier.

“There’s a sense of mystery, there’s a sense of discovery and a sense of unveiling,” said UVA football head coach Bronco Mendenhall said. “I just love the idea of not knowing who’s behind the hat. As the hat comes up, it could be anyone.”

“My hope for the new mark,” Mendenhall added, “is that it becomes a magnet for the most powerful, vibrant and brilliant young people on the planet.”

Both the popular Cavman mascot and the Cavalier on horseback, who leads the football team onto the field, will remain the same.

The Cavalier Shield logo will be used as a secondary mark and was inspired by a coat of arms design and the V-Sabre. The top of the shield contains the outline of the design of the University’s Rotunda. The hat in the center of the shield is that worn by the Cavalier mascot.

This secondary mark, the Cavalier Shield, is UVA's modern take on a coat of arms. Traced from original blueprints, the top of the shield echoes the silhouetted roof of the Rotunda. Below, the hat and sabre embody the fighting spirit of UVA Athletics.#GoHoos | #WeCavaliers pic.twitter.com/ZgTvtcsARt

The refreshed color scheme, which includes alternative shades of orange and blue as accents, was inspired by the natural colors visible in a sunset over the Blue Ridge Mountains. The primary color palette remains Cavalier Orange and Jefferson Blue, with the addition of a secondary color palette to take advantage of digital printing technology, when desired.

So amazing hearing the vision & creativity that went into this logo refresh. Awesome job @VirginiaSports can’t wait to see these next season! https://t.co/4KI0LD2bFS

The unveiling of new sports marks and logos are well known for igniting a range of passion when fans see them for the first time. Friday’s unveiling was no different.

The new UVA logos!
The new V-sabre logo is .
The secondary logos might take some getting used to but I really like the new Cavalier in orange and blue and the shield logo in navy and white is pretty cool. #Wahoowa pic.twitter.com/ZoxPaWXgBZ

This sure is something.

I’m fine with the V sabre change I think. It needed to be a little bolder, and that’s more or less what they did.

I’m getting strong XFL vibes from the secondary logo though. It looks cool, I’m just not sure it’s us. But I imagine it will grow on me. https://t.co/EiEMGD2yMO

“Hoos” and “Wahoos” will continue to be popular verbiage used along with “Cavaliers,” the University’s official mascot.

Most of the work with Nike, which was completed as part of an existing partnership, involves no new costs. Any additional application of the new mark to things such as athletic venue signage will be phased in over time as needed.

Virginia’s varsity athletics teams will wear updated uniforms featuring the new elements of the brand identity. The uniform designs will be unveiled close to the start of the athletics seasons and will be similar to what each team wore during the 2019-20 seasons.

You can find more background and details about the development of the new marks here.

Class of 2020: Memories and Moments From a Long-Anticipated Celebration END_OF_DOCUMENT_TOKEN_TO_BE_REPLACED