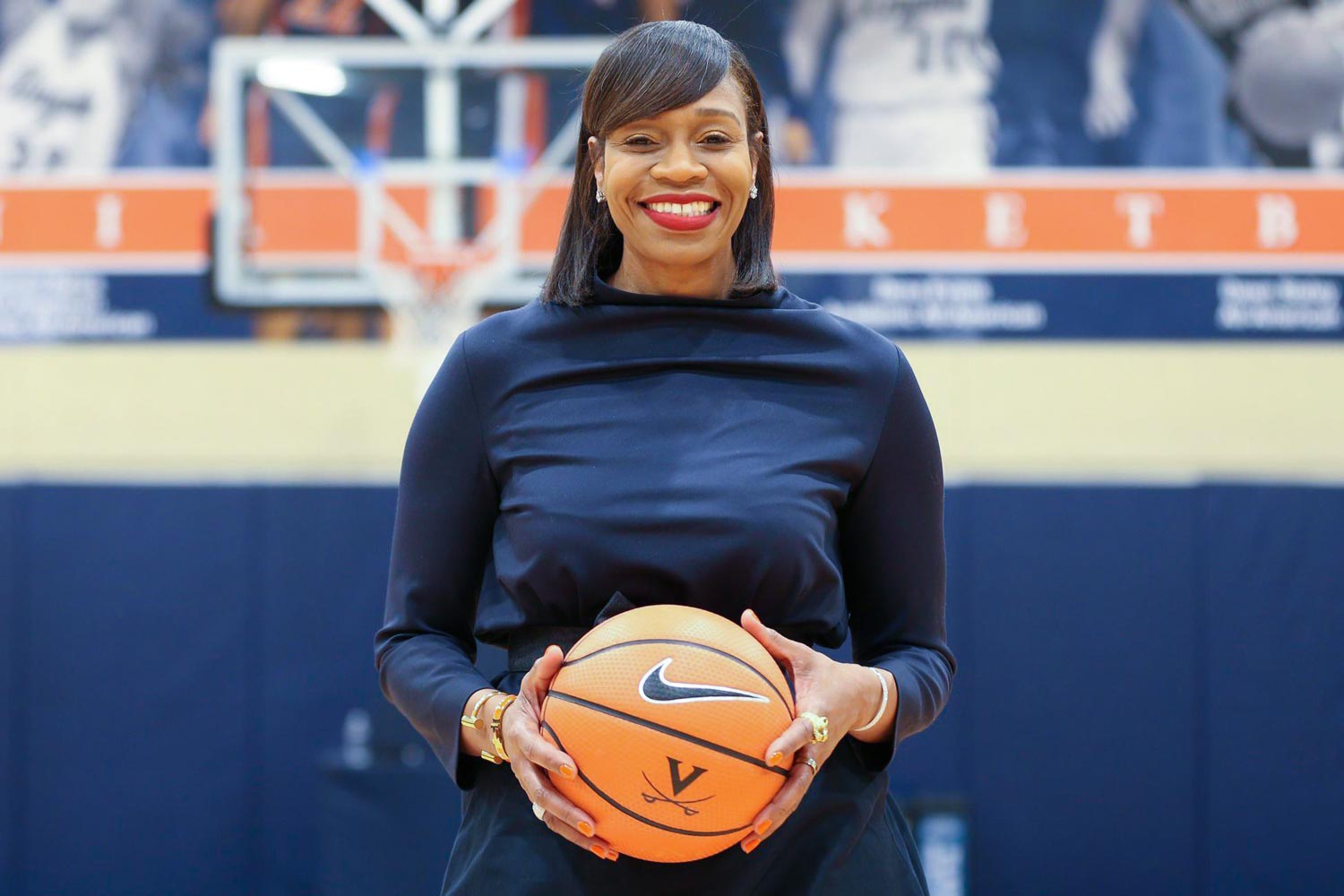 Six weeks have passed since the University of Virginia, during a press conference at John Paul Jones Arena, introduced Tina Thompson as its head women’s basketball coach.

That period included three days when coaches were permitted to be on the road recruiting. From her peers in the profession, Thompson said, she received plenty of counsel, most notably that “you’re going to hit the ground running and it’s just going to be a whirlwind until Year 2.”

That process continues for Thompson, who’s still finalizing her staff and looking to add graduate transfers to the Cavaliers’ 2018-19 roster. But she took a break Tuesday to discuss her transition from the University of Texas, where she was associate head coach in 2017-18, to Virginia.

At Texas, where she spent three seasons as an assistant, Thompson had a good sense of head coach Karen Aston’s daily schedule and responsibilities.

“The difference was, I didn’t have to make the decisions on which direction we were actually going to go,” Thompson said.

At UVA, Thompson succeeded Joanne Boyle, who retired after the 2017-18 season to focus on a family matter. Boyle led the Wahoos for seven seasons, compiling a record of 129-98. Her successor is not afraid to make changes.

“My personality is different from Coach Boyle’s. We’re totally different people,” said Thompson, a former star at the University of Southern California, for the U.S. Olympic team, and in the WNBA.

“I have, I guess, a vision of how I want things to be done and the identity of the team. Those are all things that have to be implemented, because they’re all personality things and they’re different from one person to the next. So there’s just a lot of changing and tweaking things. Not because the structure didn’t work before. It’s just not mine.”

UVA’s assistant coaches in 2017-18 were La’Keshia Frett Meredith, Katherine Graham and Tim Taylor, all of whom, for the time being, remain on the job. Thompson said she’s still deciding which assistants she’ll retain.

“I said it before, that it was really important to me to give them a proper shot,” Thompson said, because “Coach Boyle wasn’t fired. It was a special situation. The staff’s relationships with the players are good, and they’re true and genuine, so my thought process was to create the most normal way of functioning as possible for the [returning players], because a change like this is huge. I went through it three times when I was in college. I know the impact it that can have on you if it’s not done the right way.”

Thompson has made one hire, persuading Jama Sharp to leave Texas, where she was the video coordinator for women’s basketball, and join her at UVA. Sharp, a former standout at Stetson, where she scored 1,261 career points, will oversee the Cavaliers’ video operation and play a major role in creating and maintaining a recruiting database, Thompson said.

Texas employs a similar recruiting system, Thompson said, but UVA plans on “taking it to another level, in a sense, especially with the new technology and things that are coming out. ... Once you have the database, you can use it for so many things. You can use it for camp. You can use it for invitations to the games. Say we have a big game and we want to make sure that we have a bigger-than-usual crowd [of prospects in attendance], you’re able to use that to blast out to kids.

“It’s a lot of work. It just takes collecting the information. Jama’s really good at that. It’s one of her niches. She’s an innovative thinker in that way, in that she’s always looking for and researching the next thing, because there’s something that’s always being developed. But it’s how you stay current. You have to continue, not necessarily change your values and who you are, but to be aware of what’s going on around you.”

Thompson said she doesn’t need “to be the person that knows everything when I’m in a room. But I would like to be able to ask someone on my team, and for them to have the information that we need in order to be successful. Jama is one of those people.”

Still, with only one incoming recruit, freshman guard Erica Martinsen, UVA doesn’t have close to a full complement of players for 2018-19. Thompson hopes to change that by the start of the new academic year.

The day after Thompson was hired, “she was recruiting – hard,” UVA athletics director Carla Williams said recently. “She knows that she has to have players and, very similar to our other sports, talent is critical. Administrative support is critical. Getting people in the stands is important. She’s already working really hard.”

To remedy the program’s lack of depth, Thompson has targeted grad transfers.

UVA’s newcomers in 2017-18 included Amandine Toi, a 5-foot-10 guard who missed the season with a torn ACL. Toi, who’s back home in her native France, is recovering well, Thompson said, but has yet to be cleared for practice.

“We’re hoping for the best,” Thompson said. “These things you can’t predict until you actually start getting to the point where you can physically do things in a tough way.”

Thompson’s new boss, Williams, played basketball at the University of Georgia and later was an assistant on head coach Andy Landers’ staff there.

“We talk quite a bit,” Thompson said of Williams, who started at UVA in December. “Her support and her knowledge have been tremendous. She’s been a coach before, and she’s now on the other side, so she has a really unique and rare perspective.

“So I don’t have a problem asking her questions and bouncing things off her. She is very quick to say my vision is something she’s going to support, but she doesn’t hesitate about sharing her experiences and her opinions, but in a way that doesn’t sway one way or the other.”

Thompson laughed. “And if it’s a shot in the dark, she’ll say, ‘I don’t know about that. We might need to go back to the drawing board.’ So I appreciate it. She and Jane” – Jane Miller, UVA’s senior associate AD for programs – “have both been great in that way.”

Asked about Thompson, her first significant coaching hire at UVA, Williams said, “You can see the smile that it puts on my face. She is energetic. She is super smart. The players love her. Recruits love her. She’s just a breath of fresh air.”

“Women’s basketball has been great at Virginia before,” Williams said. “To me that means it can be great again.”

As a WNBA player, Thompson helped the Houston Comets capture four crowns. As an Olympian, she helped the United States win two gold medals. She’ll be inducted into the Naismith Memorial Basketball Hall of Fame in September.

Summer practice for the Cavaliers will start in several weeks. When she took the job last month, Thompson was optimistic about the program’s potential. And now?

“I think I’m even more excited,” she said, “just because I’ve really gotten an opportunity to spend time here with people at the University.”

When Thompson was hired, her new UVA coaching colleagues pledged their support. Those were not empty words. Thompson said she continues to get texts and calls from her fellow coaches, who want to make sure her transition is going well.

Their message, she said, is as straightforward as it is reassuring: “If you need any help, don’t hesitate to call. We’re still here.”

A Year We Will Never Forget: 2019-20 in Review END_OF_DOCUMENT_TOKEN_TO_BE_REPLACED

‘What Will You Carry With You?’ Remarks From UVA President Jim Ryan END_OF_DOCUMENT_TOKEN_TO_BE_REPLACED