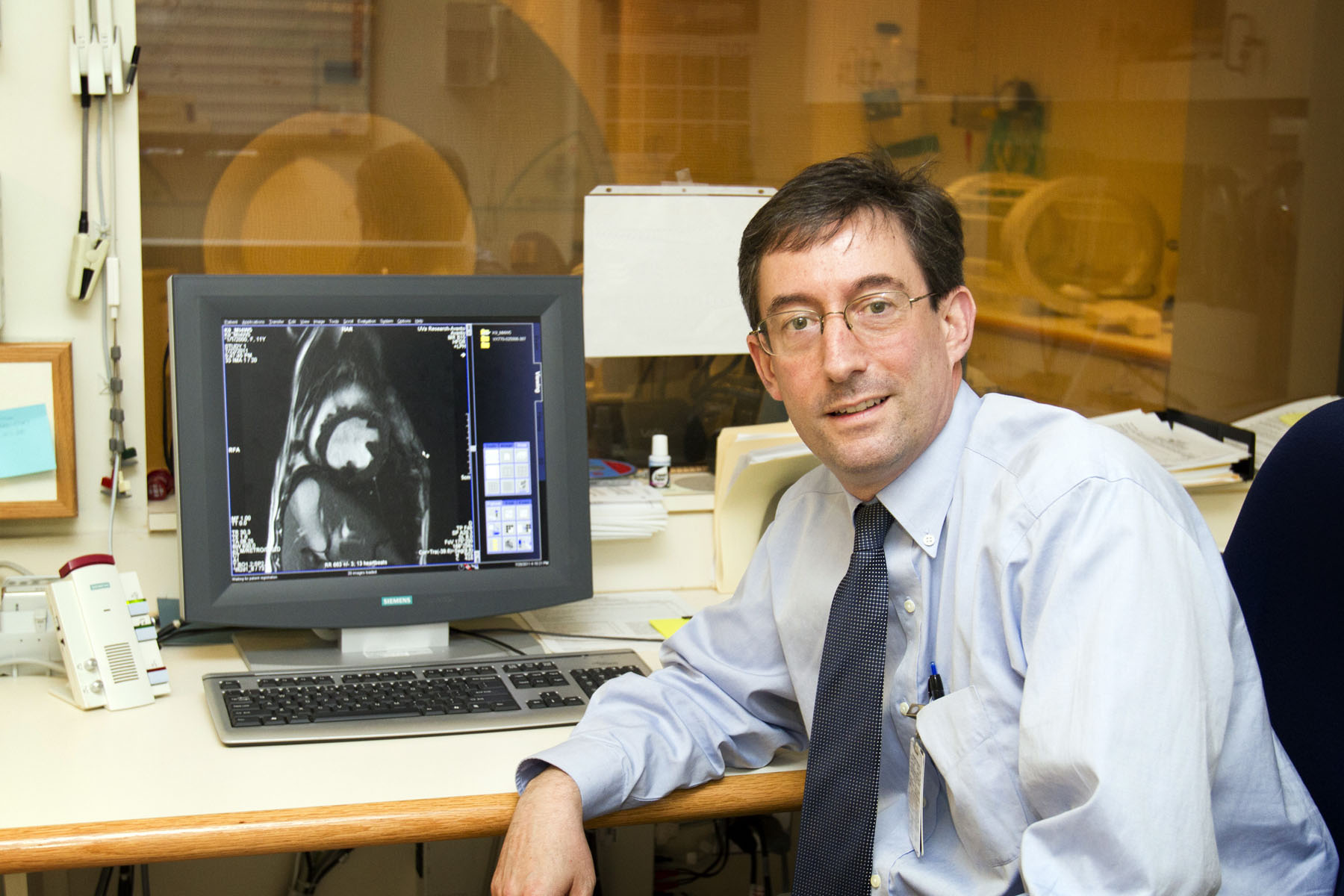 July 28, 2011 — As medical imaging continues to improve – providing sharper and clearer pictures of living human tissues – University of Virginia biomedical engineering professor Frederick Epstein is moving beyond better pictures toward images that quantify the details of the workings of organs such as the heart. This can allow physicians to make more accurate diagnoses and develop more effective treatment plans.

"I'm working on an imaging technology that details to the millimeter the movements of the heart, which can precisely tell a doctor how well or poorly it's functioning," said Epstein, new chair of the Department of Biomedical Engineering in the School of Engineering and Applied Science
and School of Medicine.

Epstein, a 1993 Ph.D. graduate of that department, holds a joint appointment with the Medical School's Department of Radiology. He has dedicated his career to improving the capabilities of noninvasive medical imaging devices, particularly magnetic resonance imaging, which uses magnetic fields to form detailed pictures of the body's internal structures. Prior to returning to U.Va. as a faculty member in 2000, he worked at General Electric Medical Systems and the National Heart, Lung, and Blood Institute, part of the National Institutes of Health.

Epstein currently is working with Siemens, the global electronics company, on developing his new technology, Cine DENSE, or Displacement Encoding with Stimulated Echoes.

"A lot of medical imaging is about improving resolution and contrast, but more needs to be done to quantify the physiology of tissues and organs," Epstein said.

He said the heart, as a pump, functions in measurable ways – its motions can be indexed. When working properly, the heart very efficiently pumps oxygen-rich blood from the left ventricle to the aorta and the other arteries. But when there is damage, such as from a heart attack, the pump can become inefficient, compressing on one side but giving way on the other. This dysynchronous pumping can ultimately result in a number of health problems from heart failure to stroke to a steady buildup of fluids in the lungs.

Physicians often treat a failing heart with a pacemaker, a device that sends electrical impulses to one part of the heart, making it beat more efficiently. A new tool, a cardiac resynchronization therapy device, known as CRT, stimulates two areas of the heart, rather than just one, often resulting in improved synchronization and improved health for the patient.

But when doctors study images of a damaged heart, they sometimes come to different conclusions as to whether CRT would benefit the patient. Implanting one is expensive and invasive and as many as one-third of recipients don't benefit from it.

"Ideally we would remove the doubt, by creating Cine DENSE images that so clearly quantify the movements of the heart that cardiologists would better know whether or not CRT would work well for a given patient," Epstein said. "This is personalized medicine – providing the right therapy for the right patient."

Epstein is working with U.Va. cardiologist Kenneth Bilchick on an NIH-funded, five-year clinical study that eventually will allow up to 90 heart-failure patients to receive CRT. Epstein will use Cine DENSE to image the patients' hearts prior to receiving a CRT device, and then imaging will be performed after treatment to determine which patients are benefiting most from the therapy.

As chair of Biomedical Engineering, Epstein plans to build on the strengths of his department, which ranks among the top 20 in the United States.

"We've got terrific faculty, and we attract outstanding students, both graduate and undergraduate," Epstein said. "We're working hard to keep getting better."

He noted that funding from the Wallace H. Coulter Foundation, which provides seed money to innovative biomedical research projects, is helping the department grow several exciting new projects. Earlier this year the foundation teamed up with U.Va. to create a $20 million endowment to foster research collaboration between biomedical engineers and clinicians, with the goal of developing new technologies to improve patient care and human health.

Previously the Coulter Foundation gave U.Va. a $5 million grant to accelerate the translation of biomedical engineering projects into commercial products and clinical practices. More than 30 U.Va. projects have been funded through Coulter since 2006, focusing on such areas as cardiovascular disease, cancer, wound repair, orthopedic surgery, medical imaging and diabetes. The invested funds have produced a 7-to-1 ratio in follow-on funding and have produced five startup companies, 11 licensing agreements, more than $12 million in venture capital and private investments, and more than $20 million in federal, state or foundation grants.

"One of our great strengths at the University is the close collaboration between our biomedical engineering department and the School of Medicine," Epstein said, noting that he hopes to further increase research collaborations with that school and with other departments in the Engineering School (several are ongoing) and with scientists in the College and Graduate School of Arts & Sciences.

"We are able to do research that can translate to real products for the benefit of people," Epstein said. "That's what I like most about our work; we get to apply engineering to improving health."