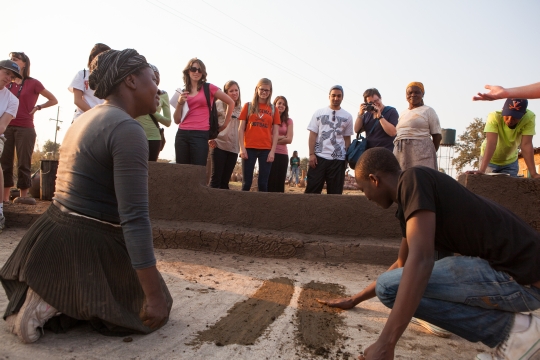 The University of Virginia on Saturday hosted Virginia’s first Lessons From Abroad Conference, bringing together 300 students from across the state who have studied abroad to process their experiences and integrate them into their education and career.

Such conferences began at the University of California at Berkeley in 2008, when a group of educators set out to help students make sense of their education-abroad experience after they returned home. Today, 15 regions around the country host similar gatherings.

Virginia’s conference came through the connections of event co-chair Kathleen McLaren-Hawking, an education-abroad adviser in the U.Va. International Studies Office who attended a previous conference and saw a transformation in students in just one day.

“I saw how excited the students were,” she said. “It’s one of those things where students don’t know that they need this conference, but once they go, they’re like, ‘I can’t believe how valuable this is.’ They really enjoy it.”

Prior to this weekend’s conference, many Virginia colleges and universities have hosted their own re-integration events. Resources have included events such as welcome-back dinners and access to an international studies office.

With around 10 percent of U.Va. undergraduates studying abroad, re-integration events will continue. However, the addition of the Lessons From Abroad conference adds an invaluable resource to the table, McLaren-Hawking said.

“We’re committed to reentry, which is a need that’s out there and [U.Va.] is attempting to address,” she said. “I believe in the model that LFA provides; I know it can be successful, I’ve seen it.”

“The idea is that they cannot only find out how they can go abroad again, but also how they can have an internationally focused life,” said Angela Manginelli, the plenary speaker at the event and vice president of Lessons from Abroad, a California-based organization that runs similar events across the country. She added, “They learn about opportunities where they can make an impact, as well as learning how to articulate their experience. It’s really about helping kids to close the learning loop and answer, ‘What’s next?’

“This is an opportunity for schools to provide an event that is larger than what they could probably do on their own.”

Virginia’s event was the largest inaugural conference that the organization has held, with the event selling out. McLaren-Hawking was initially hoping for 80 to 100 attendees, but the conference drew around 300 students from public and private schools across Virginia.

U.Va. officials say about 40 percnent of U.Va. students have a study-abroad experience by the time they graduate. Nationally, only between 2 percent and 10 percent of U.S. college students study abroad, Manginelli said. “These students are like unicorns because nationally so many people haven’t studied abroad,” she said.

Today, however, 6.3 million Americans live abroad, according to Manginelli, which could allow the students to “speak the language of [life] abroad” with others around the world.

The attendees ranged from having only recently returned from their abroad experience to having been home for more than three years. Each student brought his or her own expectations and goals for the conference.

Students could choose three of more than 11 session options held throughout the day, tailoring the conference to their own needs.

Sessions ranged from personal development, such as “Navigating Reverse Culture-Shock” to “Living an Internationally Focused Life”; to the professional, including “Graduate School/Research Abroad” and “Showcasing Your Experience.”

The career sessions were an important draw for many. Students were asked to dress in business professional attire and bring copies of their resumes.

“I had such an incredible experience in Spain. I want to figure out how I can use that and find ways to get back with my career,” Caroline Schreiber, a fourth-year student in U.Va.’s College of Arts & Sciences, said prior to the conference kickoff. “I’m so passionate about Spanish culture and language. My whole experience there was one of the best of my life, so I want to incorporate that in my life.”

A job opportunity fair during the conference featured representatives from the U.S. State Department, the Peace Corps and other potential employers, who also participated in the sessions, providing students with insight into the ways their experience abroad can transform into a career.

“I learned about the [foreign service officers and foreign service specialists], which might be the key I was looking for as far as figuring out how to integrate my interest in health care and my love for travel, learning new cultures and languages and use my experience abroad,” Schreiber said. “It was really eye-opening and exciting to find out about those jobs.”

Victoria Thomas, a senior at Shenandoah University, gained similar career insight. “I enjoyed the time we were given as individuals to think about our experiences abroad in response to a few short interview prompts. This gave me the motivation to go ahead and prepare for interviews sooner rather than later and write up a few stories that showcase my skills gained through my study-abroad experience.”

While many looked to the conference for career advancement and guidance, the emotional element that students face when returning also united many.

The conference “demonstrated that while we may not be living abroad all the time, we can still find things home that we can appreciate – like getting to know local international students and trying new things,” Brogan said. “I have been home for almost a year, so it was nice to unearth those feelings I felt while abroad. Also, it helped get everyone excited to learn how they could implement those feelings and experiences into their job/career search.”

What Is the ‘4th Side’? END_OF_DOCUMENT_TOKEN_TO_BE_REPLACED