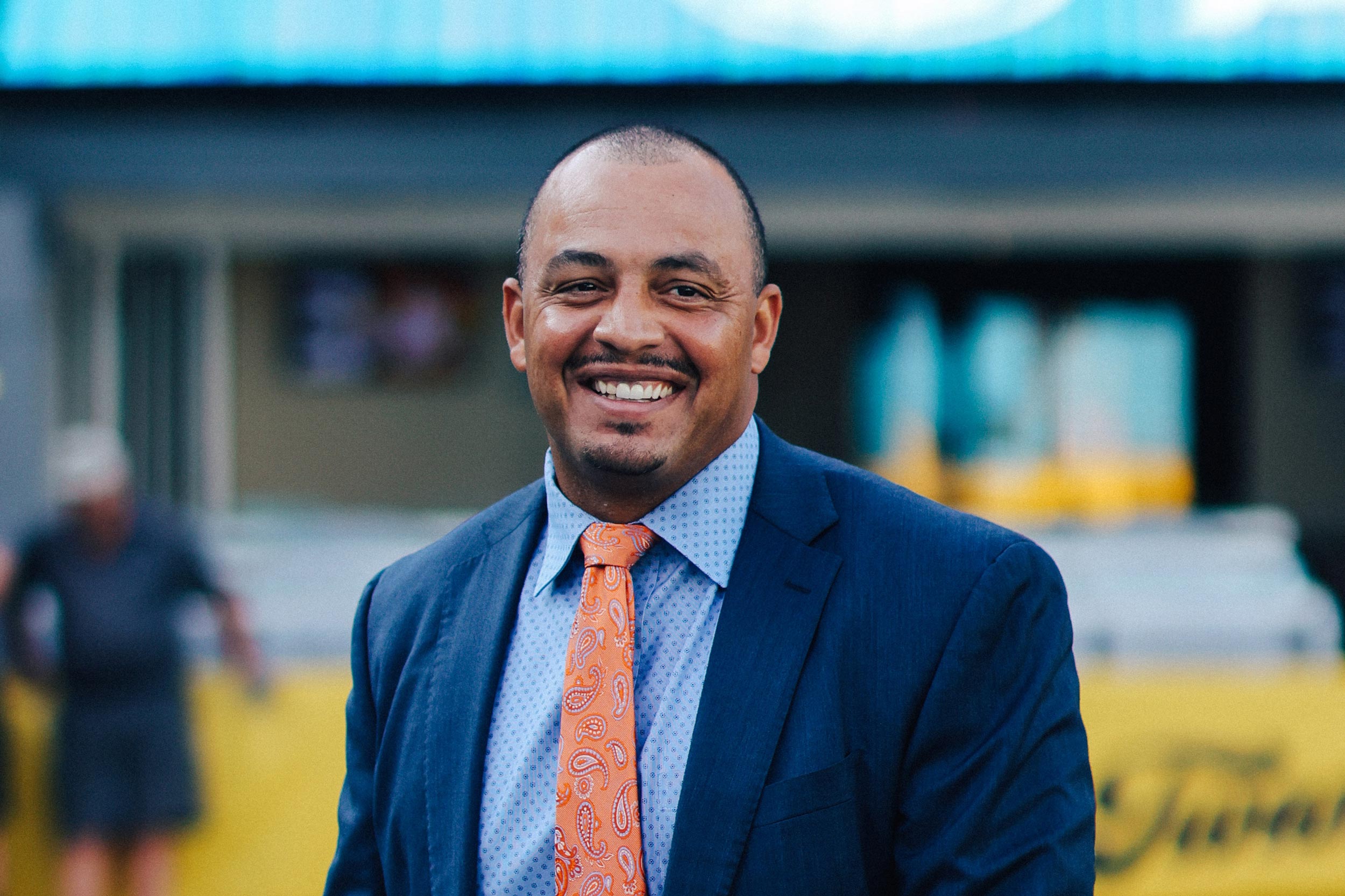 “I always knew when he took a head coaching job that he probably wanted to go to a school that really specified academics. And, to me, that’s what Virginia is all about,” said Don Munson, Clemson’s director of broadcasting.

“I think that the fit between Tony and Virginia is like a hand in glove, to be honest with you,” Munson said Saturday. “I always knew when he took a head coaching job that he probably wanted to go to a school that really specified academics. And, to me, that’s what Virginia is all about.”

Mac Lain, a former offensive lineman at Clemson, said he saw Elliott as a logical choice at UVA “because of the fact that he is not only such an amazing coach, but has such an academic background.”

Elliott earned a degree in industrial engineering from Clemson, and that foundation helps him understand “what it takes to have such a high standard of excellence in the classroom as well,” Mac Lain said.

Virginia announced the hiring of Elliott on Friday, officially ending a search that began Dec. 2. That’s when Bronco Mendenhall, the Cavaliers’ head coach for the past six seasons, announced he would step down after the team’s bowl game this month. (UVA will face SMU Dec. 29 in the Wasabi Fenway Bowl in Boston.) 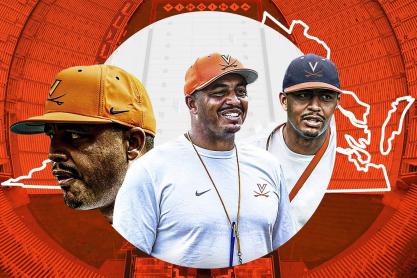 Elliott comes to UVA after 11 seasons as an assistant on head coach Dabo Swinney’s staff at Clemson, which won two national titles during that span. Elliott was the Tigers’ co-offensive coordinator for seven seasons and handled the job himself this year, when he was also assistant head coach.

In 2017, Elliott received the Frank Broyles Award as the nation’s top assistant coach. He and his wife, Tamika, have two sons, A.J. and Ace.

“I think it’s an absolute home run,” Mac Lain said. “I’m super excited for him to stay in the conference, and Virginia is a place that I think you can go and win right away. Duke, maybe not so much, for various reasons, but Virginia has all the pieces.”

Elliott, who was born in California, was 9 years old when he survived a car crash that killed his mother. His father wasn’t a big part of his life then, and Elliott ended up living with relatives in South Carolina.

An outstanding student, Elliott attended the Air Force Academy’s prep school in Colorado. He decided not to pursue the military, however, and enrolled at Clemson after being admitted there. He didn’t plan to play football in college, but Elliott had a change of heart and joined the Tigers’ program as a walk-on wide receiver.

In 2003, when Elliott was a senior, his teammates elected him one of Clemson’s captains. “That shows you the respect that he earned,” Bowden said. “It’s unusual that a walk-on can be elected captain that didn’t come in as a great star or anything athletically.”

His personal and leadership qualities will help Elliott relate not only to his players at Virginia, Bowden said, but also with the school’s administration.

“I think they’ve got the total package in a guy like him,” Bowden said. 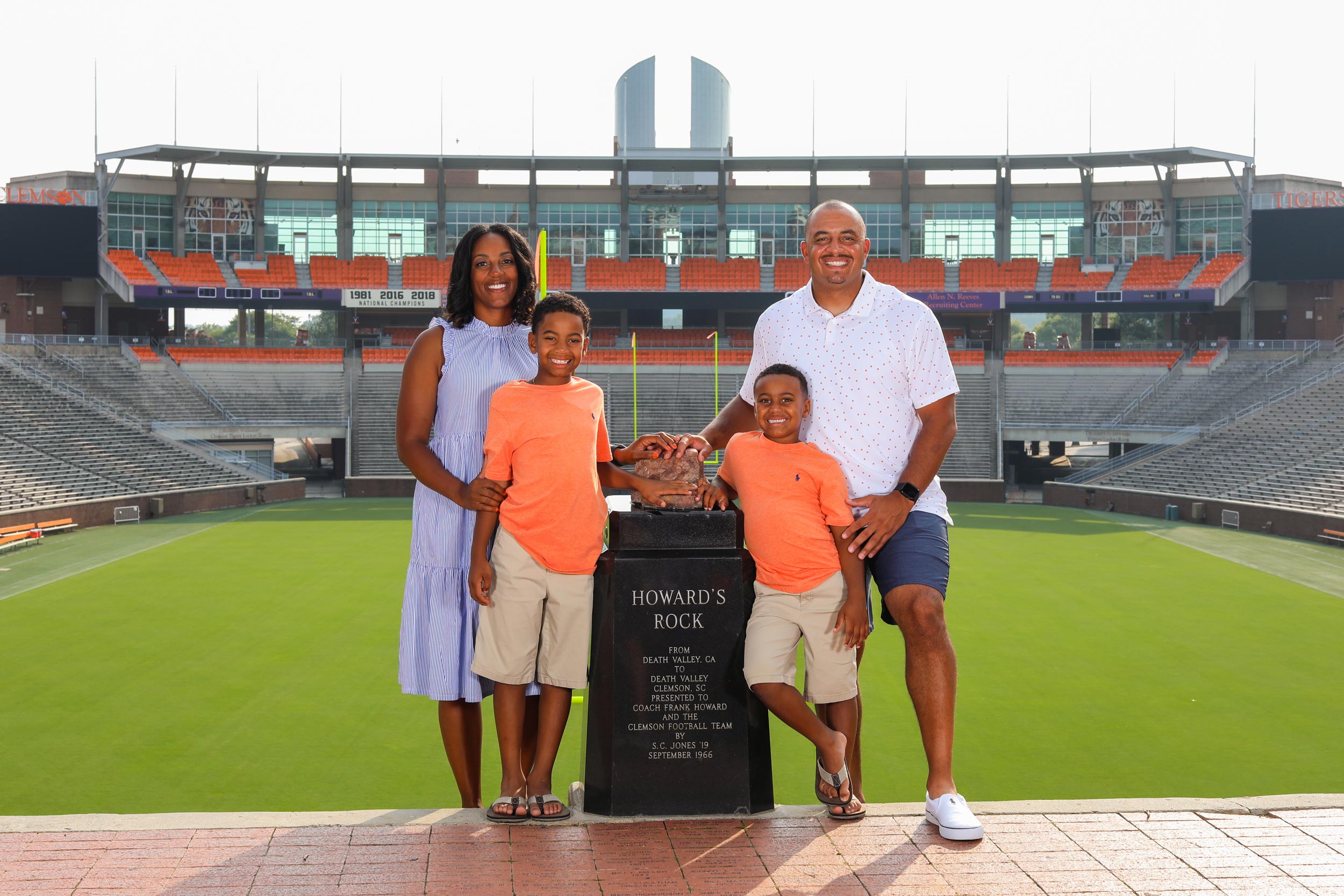 Family is important to Elliott, here with his wife Tamika and sons A.J. and Ace. Tamika met him daily for lunch at Clemson, proving a strong example for his players.

As a student at Clemson, Elliott received an ACC Weaver-James-Corrigan Postgraduate Scholarship, and he made the conference’s all-academic team. Like Munson and Mac Lain, Bowden believes Elliott’s academic credentials will “be a tremendous asset for him coaching at a place like Virginia.”

Elliott’s position coach at Clemson was Swinney, who released a statement Friday.

“I just can’t tell you how happy I am for Tony and Tamika and Ace and A.J.,” Swinney said, “and also just how proud I am of Tony,” Swinney said.

“Man, it’s really, really been an amazing journey for me to watch Tony since 2003. He was in my first receiver group – a captain. And I’m not quite old enough to be his dad, but I look at him like a son. He really is special. I love him and his family with all my heart. I’m just so proud of him and all that he’s done since I hired him in 2011.”

“The biggest thing for me was the fact that he treated you like a man first and a football player second,” Mac Lain said. “He much more cared about our development as future fathers, future husbands, citizens in society, than as football players. Any time that I would speak to him, I knew that he cared about me, Eric Mac Lain the person, and not just the player.

“That was such a huge piece, because you can trust that guy so easily, and he’s going to win those players’ hearts so quickly at Virginia. … He’s fascinating, man, and he’s a genius. It was so much fun sitting in meetings with him and seeing the game through his eyes and listening to how he saw things and how he would break things down. I couldn’t be more happy for the guy.”

Elliott is also highly regarded as a recruiter, and Mac Lain understands why.

“There’s some guys, they turn it on for those recruits and they can put on a face and they can go into these homes and sell a dream and all that,” Mac Lain said, “but I think what’s so great about Coach Elliott is he’s just so real, and what you see is what you get. It’s not some act. It’s not, ‘OK, for this part of the season I have to put on this face.’ He is who he is, and I think that will be really something that recruits love and that family members love.”

UVA needs to do a better job of recruiting in-state, Mac Lain said, and Elliott “has the capability to do that. We’ve seen what he does with the talent.”

After graduating from Clemson, Elliott didn’t move into coaching immediately. For nearly two years, he worked as an industrial engineer at a Michelin tire plant in Anderson, South Carolina.

“Tony may or may not remember this,” Bowden said, “but I remember him coming to my office after his career was over, and we talked about the coaching profession. And I just said, ‘I’m going to be honest with you. It’s tough on family, it’s tough on marriage.’ And the pay at that time didn’t merit the hours. Now it does.”

Ultimately, though, Elliott realized he missed football, and he left Michelin to become an assistant coach at South Carolina State, where he spent two seasons. Then came three seasons at Furman, after which he returned to his alma mater.

That Elliott has thrived in coaching doesn’t surprise Bowden.

“When he initially inquired about it, I said, ‘You’ve got all the intangibles, everything you would need,’” Bowden said. “He’s an overachiever. He walked on. Dabo was a walk-on. I was a walk-on. He’s got a lot of patience and perseverance. He didn’t choose coaching at first, but then when he did, he’s been a rocket as far as his career.”

After finishing 10-2 in 2020, Clemson had five players selected in last spring’s NFL draft. Quarterback Trevor Lawrence (who was drafted No. 1 overall) and running back Travis Etienne were first-round picks. Offensive lineman Jackson Carman went in the second round, and wideouts Amari Rodgers and Cornell Powell were drafted in the third and fifth rounds, respectively. 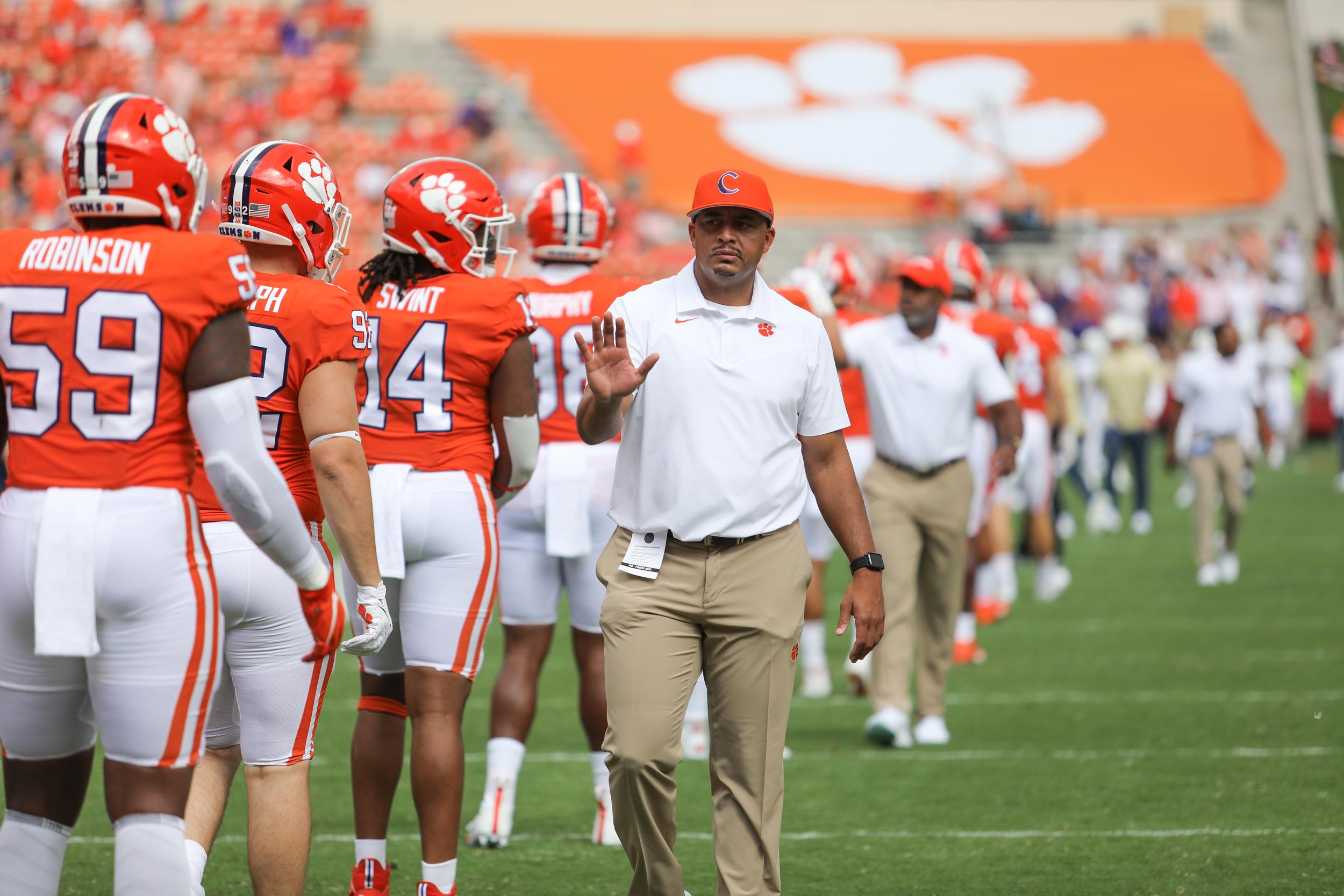 One of Elliott’s former players say he earned their trust by caring for them as people before football players.

Not surprisingly, perhaps, Clemson’s offense started slowly this season. In the Tigers’ first seven games, they totaled only 120 points.

“He had younger kids growing up,” said Munson, Clemson’s radio play-by-play announcer, referring to the Tigers’ young  lineup, “and I think one of the things that hurt Tony and the offense this year was all the different times they had to put out a different offensive line. They did not know week-to-week who was going to be healthy, and so they were always having to patchwork an offensive line.”

The Tigers eventually ramped up their productivity, scoring 182 points in their final five regular-season games, all victories. The offensive line stayed healthy, Munson said, “and I think that was as big as anything; all of the sudden there was some continuity on the offensive line, because you still had injuries [at other positions].”

Clemson (9-3 overall, 6-2 ACC) is ranked No. 19 nationally. Its late-season victories included a 48-27 pummeling of Atlantic Division champion Wake Forest University. The Tigers attempted only two passes in the second half of that game.

“If there’s one thing I’ll tell you about Tony, it’s that he’s always stressed being balanced,” Munson said. “He believes in offenses being balanced, but he’s not afraid to say if something’s working, then that’s what we’re going to stick with.

“He also believes that games are won in the trenches. So with whoever he hires on staff there or whoever he’s going to keep on staff, certainly the offensive line and defensive line are going to be key components for what he does as a head coach.”

“He’s had a lot of opportunities in the past [to become a head coach],” McCorvey said Saturday. “He had one last year at the University of Tennessee, for sure, but he decided he wanted to wait on it and be a little more patient. But he’s very deserving of the opportunity that the University of Virginia is going to give him in leading that program as the head football coach.”

Elliott is a man of faith, McCorvey said. “He doesn’t push it on anybody, but everybody knows his background when it comes to that.”

Family is also important to Elliott, who spends as much time as he can with his wife and their sons. “Tamika comes over here every day and they eat lunch together,” McCorvey said, “and it’s been good that our players see him in that light, because today a lot of times some of these kids don’t have that.”

Elliott “has always had a drive to be the best,” McCorvey said, “and that has pushed him.”

And now comes the opportunity for which Elliott has prepared and waited. He’ll be missed at Clemson.

“I’m going to leave you with one thing,” McCorvey said, “since I’m an old guy that grew up in Alabama and coached at Alabama. Coach [Bear] Bryant said that he couldn’t define class, but he knew what it looked like. And that’s Tony Elliott.” 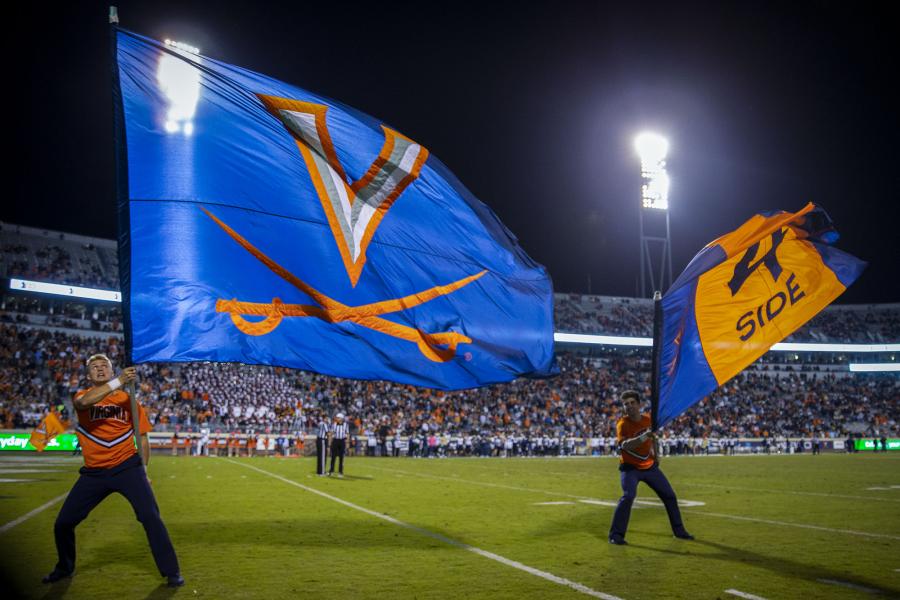 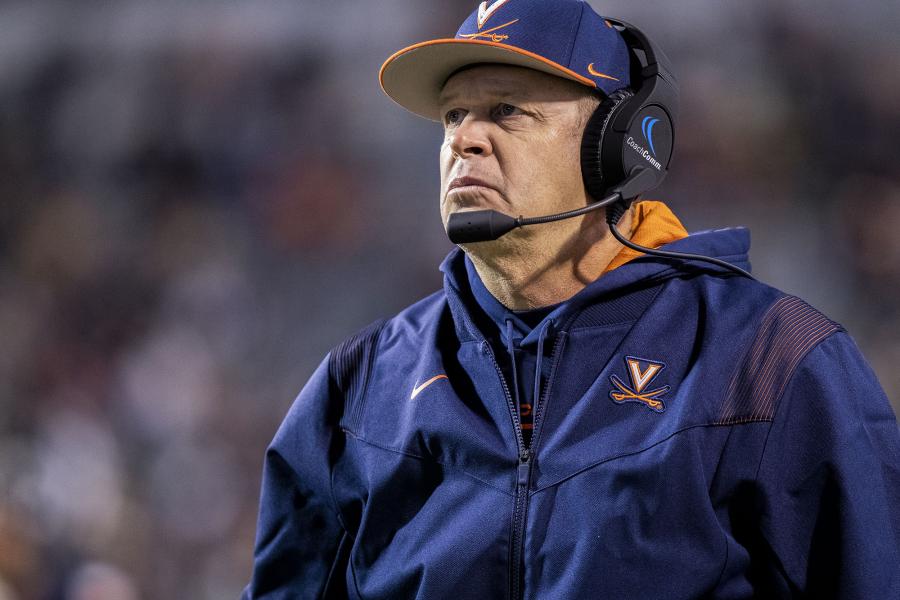 Mendenhall’s Journey at UVA Coming to an End