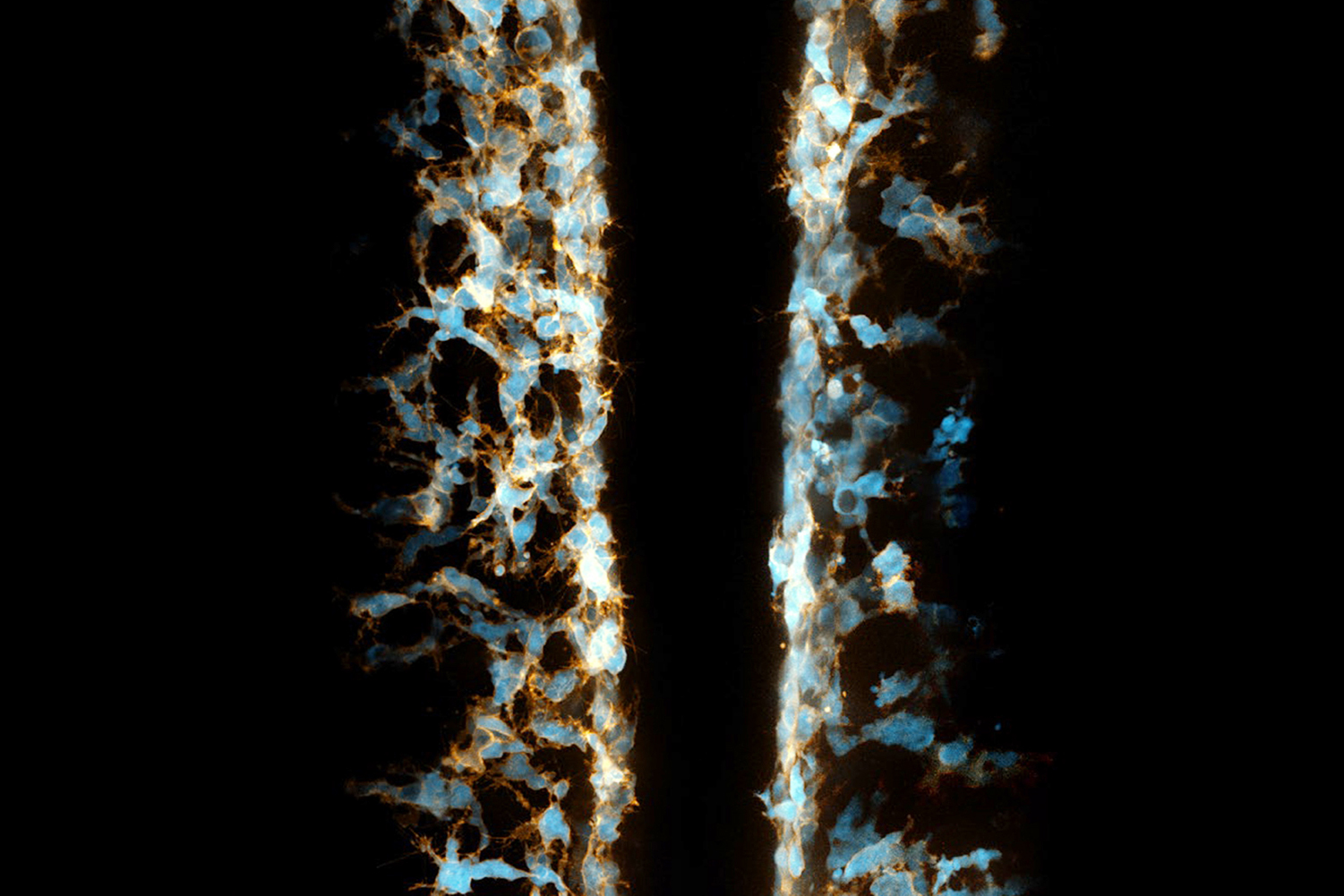 During the lifetime of a body – whether human, fish or any other type of vertebrate – cells die, making room for fresh new cells to carry on vital processes. The dead cells must be cleared away, though, and debris removal is performed after the embryonic stage by cells of the immune system called macrophages.

However, organisms in the embryonic stage do not yet have macrophages and immune systems. That comes later, during further development of the organism.

So how are dead cells necessarily cleared away prior to the manifestation of macrophages? This is an old question long asked by developmental biologists.

Now, there is an answer. In a paper published online Thursday in the journal Cell, University of Virginia biologists describe a process they’ve discovered in which embryonic cells of the nervous system, called neural crest cells, conduct the dead cell removal task extremely early in the development of zebrafish. (Zebrafish are commonly used as study models by developmental biologists because they have virtually all of the developmental traits and genes of humans.) 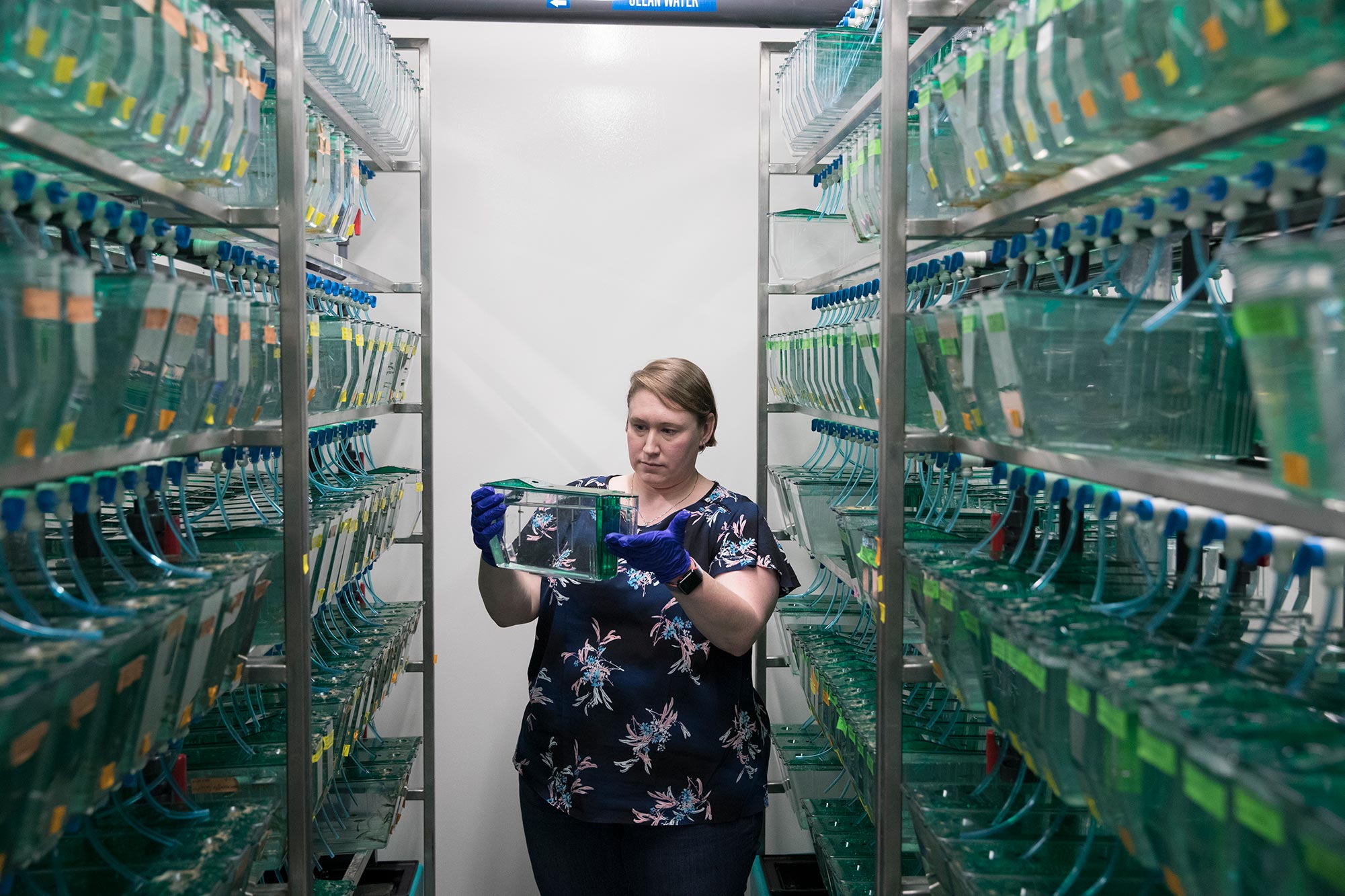 Using detailed imaging of the trunks of living zebrafish embryos, the researchers were able to witness migratory neural crest cells functioning in a manner very similar to macrophages. The neural crest cells, which eventually bring forth the peripheral nervous system and give rise to many kinds of tissue (bone, pigment cells, cartilage and fibrous connective tissue) seem to physically reach out to dead cells, encircle them, and then absorb the contained compounds, such as amino acids, which are then used for new cell construction.

“It’s interesting, and unexpected, in that the neural crest cells are using the same mechanism of cell debris clearance that macrophages will later use when they take over this important role,” said study co-author Sarah Kucenas, a UVA professor of biology, cell biology and neuroscience and a member of the UVA Brain Institute. “It makes sense too, that cells with the ability to move rapidly across the body plan, the neural crest cells, would serve this important early function – dead cell clearance – until specialized cells, the macrophages, come online.”

One of Kucenas’ graduate students, Yunlu Zhu, who just completed his Ph.D., made the discovery, and conducted several further investigations with Kucenas and undergraduate neuroscience student Samantha Crowley.

“Being an observant and creative scientist, Yunlu noticed, and then began studying, a cell behavior that had never been noticed before, even though neural crest cells have been studied for more than 150 years,” Kucenas said. “Nobody ever thought these cells would eat debris like the immune system does – before the immune system even develops.”

Kucenas describes the process of embryonic development, and cell debris clearing, as being somewhat like the construction of a building. Scaffolding is needed to build the actual embryo, but the scaffolding – the no-longer-needed construction aid – can later be removed and used later for new construction.

“The remarkable thing is that the neural crest cells are cleaning up some of the mess-making in early embryo construction, prior to the immune system arising to take over that work,” she said. “This is something we now can explore more deeply.”

Kucenas said she plans, in future studies, to stop the neural crest cells from feeding, to see what the downstream physiological effects would be. This could provide new insights into developmental disorders, including those that affect the nervous system, in which debris-clearing may be done inefficiently or at the wrong time, leading to dysfunction.

“This opens up a new avenue of research into how the immune system coordinates with non-immune cells to sculpt a body,” she said. “It could be that neural crest cells help prime the circuitry of the nervous system – getting it up and running. And without normal clearance of debris by these cells, development may go awry.”

The study was funded by the National Institutes of Health and the UVA Brain Institute.

What’s Next for UVA’s Class of 2022? END_OF_DOCUMENT_TOKEN_TO_BE_REPLACED

How Affordable is UVA? END_OF_DOCUMENT_TOKEN_TO_BE_REPLACED