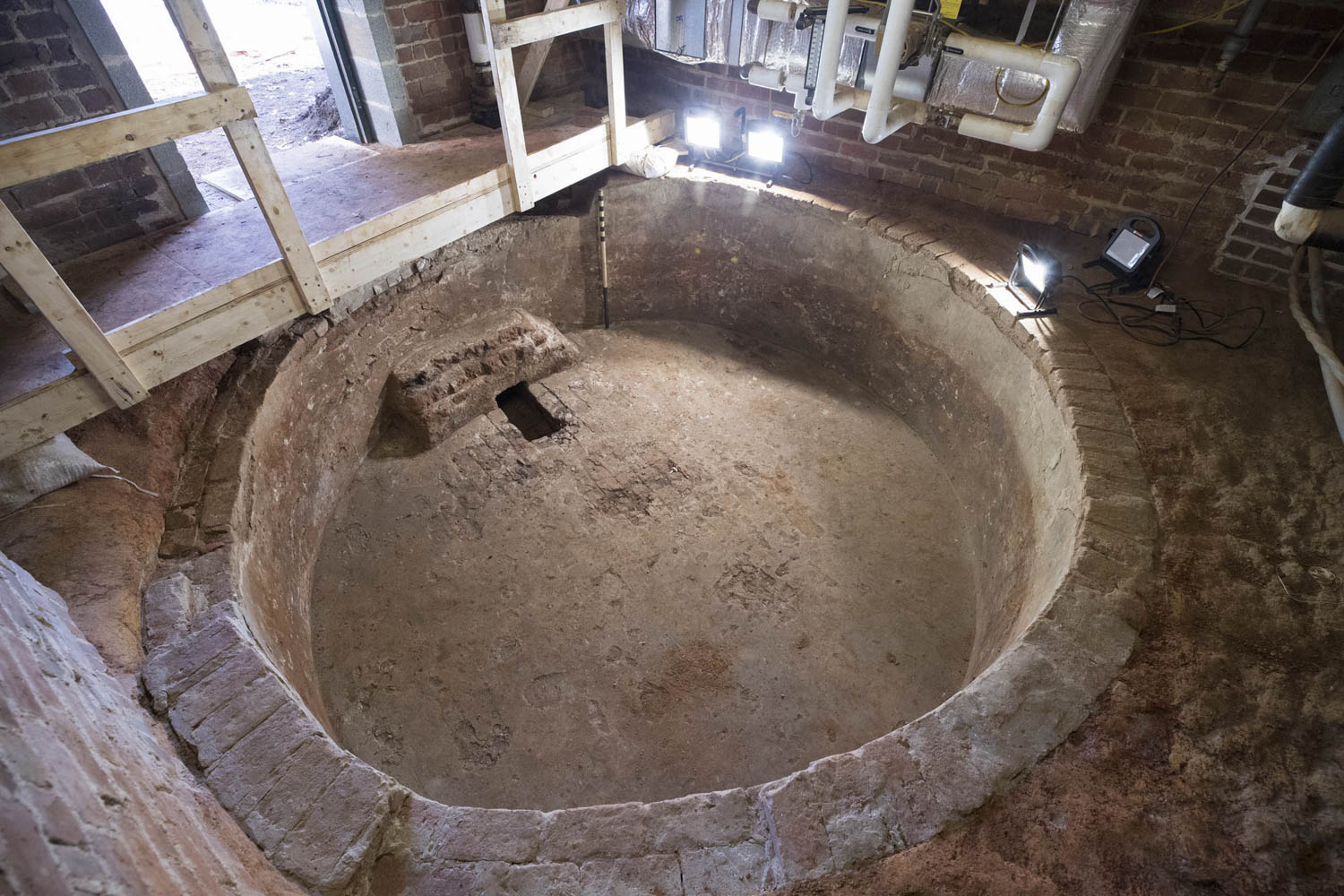 The cistern is believed to be part of the original firefighting system for the University. (Photos by Dan Addison, University Communications)

The University of Virginia will preserve a cistern that was part of the original firefighting plan for the Academical Village.

Archaeologists last summer excavated a shallow cistern underneath Lawn room 24 on the east side of the Lawn that was part of a water supply and storage system devised by Proctor Arthur S. Brockenbrough, who supervised construction of the Academical Village in the early 19th century.

Archaeologist Steve Thompson of Rivanna Archaeological Services, who is writing a history of UVA’s water system, said Brockenbrough had designed a water system with two cisterns behind pavilions V and IX on the west side of the Lawn and the cistern under room 24 on the east – all gravity-fed water from another cistern near Brockenbrough’s residence on Monroe Hill. Thompson said the Monroe Hill cistern, if it still exists, has not yet been found. 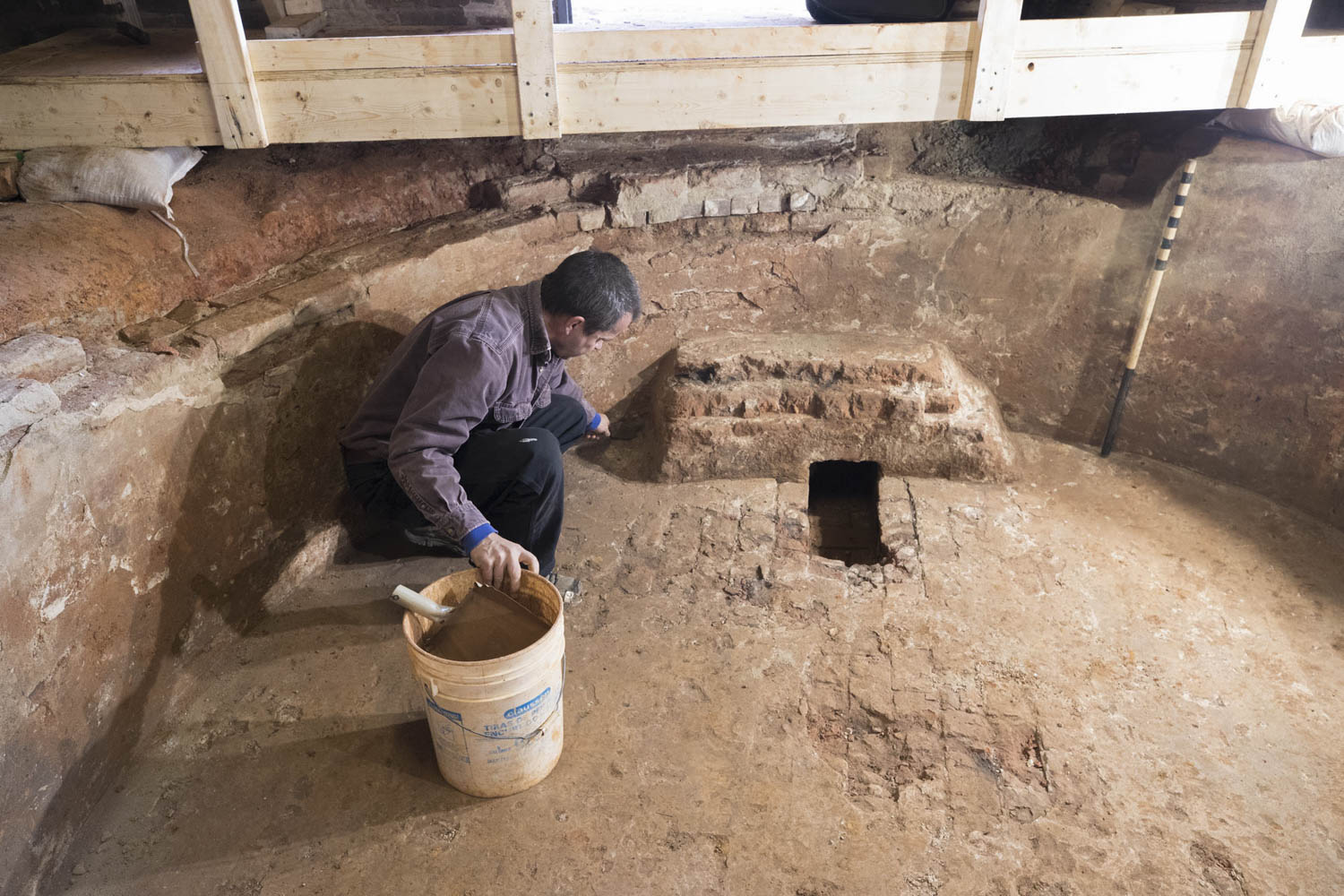 The Board of Visitors of that day had favored building a single large cistern in the center of the Lawn for firefighting use, but Brockenbrough argued against this, saying that the University would have to purchase an additional 400 feet of fire hose to reach the corners of the Academical Village from a single, central site. The proctor also argued that the gravity-fed cisterns would supply water faster than would a central cistern from which the water would have to be pumped.

“Brockenbrough’s persistence in advocating for a cistern on Monroe Hill appears to have paid off, and in its July 1828 meeting the Board of Visitors approved the construction of this facility ‘near the proctor’s house, as recommended by him,’” Thompson writes in his history of the University water system. “It would also appear that the other elements of Brockenbrough’s water supply plan were also approved.”

In March 1829, Robley Dunglison, chair of the faculty and UVA’s first professor of medicine, objected to a cistern underneath a student room – though by the time he discovered it, the cistern had already been dug. Dunglison suggested a reservoir be dug near a neighboring pavilion, but evidence of the cistern’s completion indicates that Brockenbrough did not follow this advice.

“Although Brockenbrough’s reasons for installing a cistern under an East Lawn dormitory room went unrecorded, the goal probably was to provide both a second, more centrally located water store to perhaps augment poor water flow and low pressure at the Lawn and East Street hydrants,” Thompson wrote in his history.

An underground pipe initially linked the East Lawn cistern to a site on the East Range where a hydrant was believed to be located. The water was gravity-fed from an outlet on the floor of the cistern to the hydrant, which would then have been connected to the University’s pumper wagon – a Hydraulion model the University purchased from Sellers and Pennock of Philadelphia.

“The Sellers and Pennock Hydraulion consisted of a wheel-mounted water tank or ‘reservoir’ outfitted with a reel of hose and two manually operated pumps,” Thompson wrote. “The wagon’s reservoir could be filled by bucket and by pump and hose. … With a full reservoir, the Hydraulion’s pump would force water from the tank through an outgoing hose to the fire.

“The Hydraulion required 20 men to be put into full operation, 16 of whom were necessary to work the machine’s pump.”

It made sense to have a hydrant on the East Range “because the meals were prepared in the hotels on the ranges and there would have been a greater risk of fire,” said James Zehmer, a project manager with Facilities Management.

The land slopes away sharply from the east side of the Lawn, and underneath the Lawn rooms were workspaces and rooms which may have included slaves’ quarters. Zehmer said there was a plaster ceiling in a room underneath Room 24, likely installed before the cistern was dug – suggesting that the room had already been used for other purposes. The cistern may also have had a wooden cover over its top.

The cistern is about 10 feet across and about 3 feet deep. When archaeologists first excavated it, it was filled with nearly 600 bricks, which archaeologists believed were removed from the upper section of the cistern structure and used as part of the fill when it was closed down. Thompson  estimated that the bricks removed from the top of the cistern would have added another roughly 12 to 18 inches to the height of the cistern, as originally built. He estimated it would have held about 2,400 gallons of water.

The floor of the cistern is made of brick set on a dense, white-clay base, and the structure is lined with hydraulic cement. No names were found etched in this cistern, as had been found in another cistern near the Rotunda excavated in the spring of 2014.

The University brought in John Matteo, a structural engineer with 1200 Architectural Engineers of Alexandria, to assess the cistern and determine whether it could be left exposed for interpretation, and if repairs would be needed.

Matteo, who has worked on other University projects such as the Rotunda, determined the cistern’s masonry was “overstressed,” saying it was not surprising “given the proximity of [the East Lawn’s] foundation walls bearing near the top of the cistern walls.”

Based on Matteo’s recommendations, the University’s historic preservation masons will reuse the original bricks to return the cistern to its original height. Once restored, it will be filled with crushed stone; leaving the cistern open would have undermined the foundation for the student room, Zehmer said. Once the cistern is refilled, the room’s foundation will be shored up.

Archaeologists offered no precise date when it stopped functioning as a cistern. “We believe that this particular cistern may have stopped being used as a repository for water sometime after the implementation of the Charles Ellet water system, around 1858 or 1859, and the utilization of iron water supply lines,” said Ben Ford, one of the principals of Rivanna Archaeology.

The Jeffersonian wooden-water-pipe system connected to the cisterns was probably abandoned in the early 1830s, when mentions of it disappear from the official documents. University records after 1833 indicate a deliberate strategy of diverting rain water into the cisterns.

“The cistern under East Lawn room 24 may have been adapted to collect roof runoff at some time after 1833 or so, if the wooden lines could no longer be relied upon to keep it full,” Thompson said.

The University undertook a series of efforts to install an iron pipe water supply system, beginning in 1837 and continuing through the 1840s and early 1850s. It was only in 1856 that the University succeeded in raising sufficient funding to hire Ellet and implement the plan that he developed. Ellet’s iron-pipe water system did not feed the cisterns, which nonetheless continued to collect rain water for firefighting and other purposes.

Whenever the cistern finally ceased functioning as water storage, it may have been used as a coal bin. Coal would have been scarce until the railroad came to Charlottesville in 1850 and would have been much more available after the Civil War.

Archaeologists could not pinpoint when the cistern was filled in using the bricks from its top courses and soil from the nearby gardens.  In sifting through the fill in the cistern, archaeologists found an 1868 nickel and a post-1870 bottle top capsule manufactured by E & J Burke of Dublin, Ireland, the chief exporters of Guinness Stout to America.

“A bottle top capsule is a thin piece of impressed tin-plated lead that was applied over the corks or stoppers of many 19th-century bottles,” Ford said. “This means that the cistern was open and being used, or not used, at least into the early post-Emancipation period.”