No Shortcuts to the Past: Holly Cowan Shulman Takes on Biography 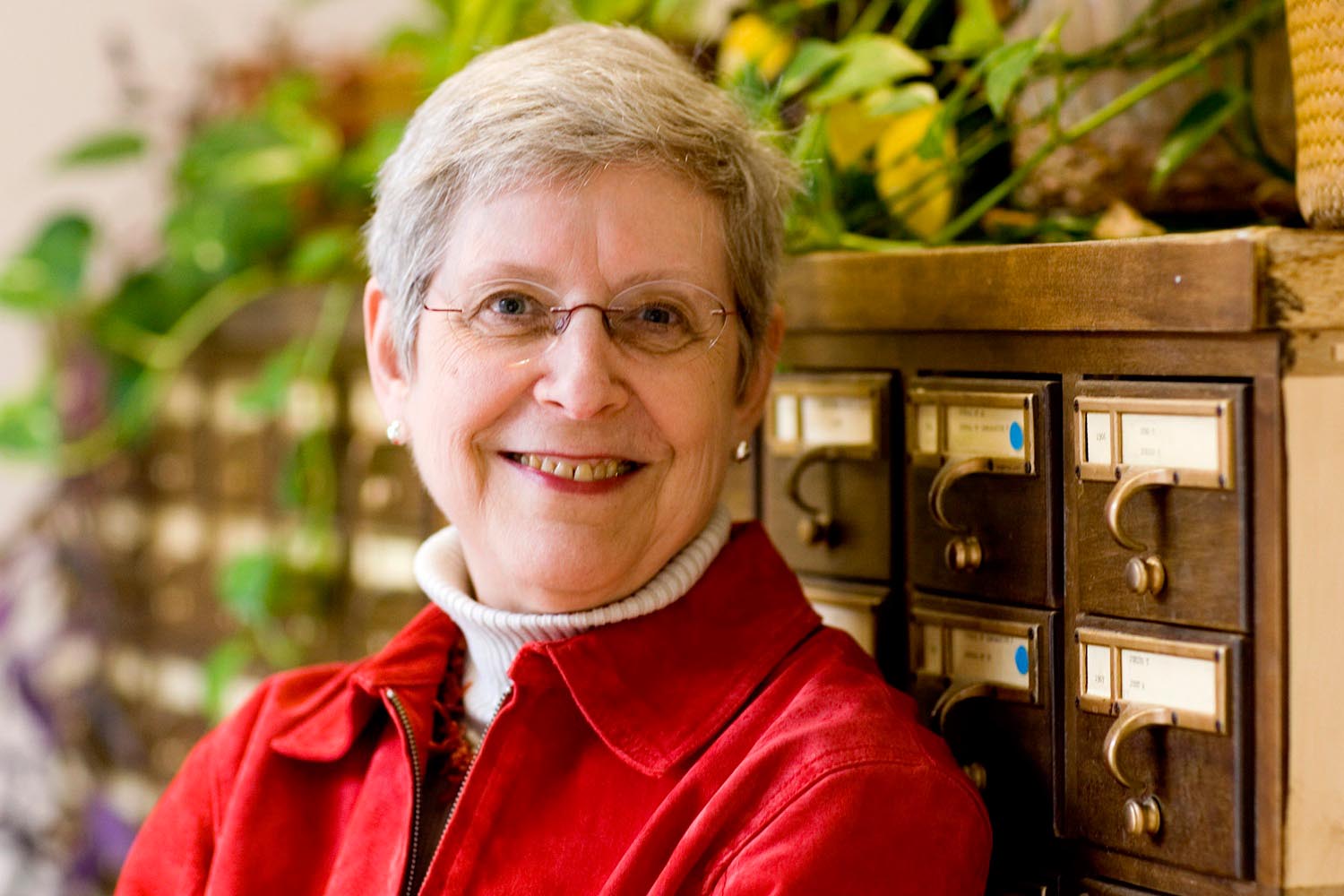 To talk with her is to be rocketed headlong into a rush of topics, ranging from electronic publishing to social justice to the rigorous inspection of historical documents. For her, the last of these is an article of faith. As a biographer, she relentlessly searches for the warp and woof of her subjects' lives and their connections to the "larger moments of their period."

Shulman holds three titles at U.Va.: editor of the Dolley Madison Digital Edition; research professor in the Studies in Women & Gender program; and director of documentary editions for the Virginia Center for Digital History.

Though she admits the interpretive cast of historical research, Shulman sees herself more as an empiricist than theorist. "I believe that we always interpret. Theory can be important, but I'm a historian. I don't have an answer before I begin doing my research."

Shulman comes by her intellectual vigor honestly. Born on Dec. 1, 1943, in New York City, she was raised by parents who extolled the pleasure of inquiry. "We had at least two sets of encyclopedias, maybe three. If you had a question, you brought the encyclopedia to the table and discussed it."

A successful radio producer and later network executive at CBS, Louis G. Cowan worked at the epicenter of early television. Shulman shared a family anecdote about his link to the new medium. "My father was the producer of something called 'The $64,000 Question.' When it went on the air, it knocked Steve Allen off of first place. Dad always regretted it because he thought Steve Allen was one of the world's greatest comedians."

Cowan's immersion in the media industry shaped his children. "We kids received a tremendous interest in the media and how it works," Shulman said. "That's been very important in my work as a digital historian."

From her mother, Pauline (Polly) Spiegel, Shulman inherited a keen interest in social justice. Polly's father made a great deal of money through Spiegel, a still-thriving mail-order catalog business. In the 1920s, the family settled in an upper-crust Chicago suburb, but their wealth couldn't insulate them from anti-Semitism in the community. From those early snubs, Polly knew the sting of being an outsider.

In 2007 Shulman wrote an essay tracing the arc of her mother's social conscience. During the Spanish Civil War in the 1930s, Polly dreamed of fighting fascism and "going to Spain as a nurse for the Republican soldiers." Soon she met and married Lou Cowan. They had four children in rapid succession.

Despite her busy family life, Polly worked in radio and television production. But it was through the burgeoning Civil Rights Movement that she channeled her activist energies. In 1963, she and Dorothy I. Height, president of the National Council of Negro Women, created "Wednesdays in Mississippi," a project that sent teams of black and white Northern women to Mississippi to learn from and support their Southern counterparts.

In November 1976, Lou and Polly Cowan died in a fire in their Manhattan apartment. In many ways, Shulman's work — including a doctoral dissertation on the birth of short-wave radio, a book on the Voice of America during World War II and an encyclopedia biography of Eleanor Roosevelt — has been an attempt to honor their legacies.

Shulman's interest in biography began early. Like millions of other Baby Boomers during the elementary school years, she devoured what she called "those little orange biographies." In profiling famous Americans, the Young Patriots Series introduced young readers like Shulman to the customs of the genre. "They were wonderful," she reminisced. "And they included women." The subjects included Sacajawea, the Indian woman who accompanied the Lewis and Clark expedition; Juliette Gordon Low, Girl Scouts of the United States founder; and Nancy Hanks, Abraham Lincoln's historically elusive mother.

Another influence was Edward R. Murrow's "Harvest of Shame," a 1960 television documentary about the oppression of American migrant workers. The film represented a merging of two of her fascinations — documentary history and social justice. "It was a stunning piece of television," she said.

Shulman's approach to biography has an archeological slant. And to excavate the sub-strata of her subjects' lives, she's willing to buck convention. "The Eleanor Roosevelt Encyclopedia," which she co-edited with Maurine H. Beasley and Henry R. Beasley, is a case in point.

Speaking for "U.Va. NewsMakers" after the book's publication in 2001, Shulman noted that where "traditional biography pretty much sticks to a chronological flow," the Roosevelt encyclopedia is arranged alphabetically, focusing on the people, events and organizations that made up the intricate web of the famous first lady's life.

Shulman then turned her eye to another famous first lady — Dolley Payne Madison, wife of the nation's fourth president, James Madison. In many ways, Dolley Madison has been hidden in plain sight. Well-known in her own time, she became a pop culture icon from the 19th century onward. Her name and image have appeared on dozens of products, including ice cream, cigars and crystal stemware. But behind such ubiquity, who was she?

In "The Selected Letters of Dolley Payne Madison," Shulman and co-editor David B. Mattern, senior associate editor of the Papers of James Madison, tackle that question. Published in 2003 by the University of Virginia Press, this compilation reveals much about Madison's life and the surrounding culture. But Madison herself didn't make the biographers' task easy.

Shulman explained that the first lady often used "code" or "shorthand" in her communiqués. "She doesn't write a letter so that 200 years later I could come along and understand what she's talking about."

The "serendipities of biography"

Shulman had to dig deeply. In a letter that Madison wrote after her husband's death to Albert Gallatin, a former Treasury secretary and prominent diplomat, she mentions that a Col. James Blakey had come to Montpelier. It was a passing reference that Shulman couldn't ignore.

Blakey, it turns out, was a local innkeeper and neighbor of Madison's. He also bred horses — and traded slaves. Unearthing that last nugget provided an "aha" moment for Shulman. After her husband's death, Dolley needed money. To Shulman, it seems likely that Madison would have preferred negotiating with Blakey on the sale of Montpelier slaves than dealing with "some outsider who comes up from Louisiana."

The Blakey story, she continued, is "salient because what we know about slavery tends to be not on such a granular level." And that, she concluded with a nod of the head, shows the "serendipitous nature of biography."

Mattern praises Shulman's dogged pursuit of information. "Historians follow their curiosity. With Holly, there are no shortcuts. She pushes you to do your very best work."

In 2007, Shulman unveiled The Dolley Madison Digital Edition, a milestone work: it is the first-ever complete edition of Madison's known correspondence, and the text is searchable. It's also the first publication in the Rotunda Founding Era collection of digital documentary editions from U.Va. Press's Electronic Imprint. True to Shulman's no-shortcuts ethic, it delivers an "established" text that adheres strictly to the standards of the Association for Documentary Editing.

Mark Saunders, the press' director of marketing, reflected on the project and his work with Shulman. "'Dolley' was really a laboratory for us. What's always struck me about Holly is her rare combination of impeccable scholarship and entrepreneurial spirit. She was the perfect partner. You can count on the integrity of her work."

For information about the Dolley Madison Digital Edition, visit rotunda.upress.virginia.edu:8080/dmde.

Class of 2020: Memories and Moments From a Long-Anticipated Celebration END_OF_DOCUMENT_TOKEN_TO_BE_REPLACED