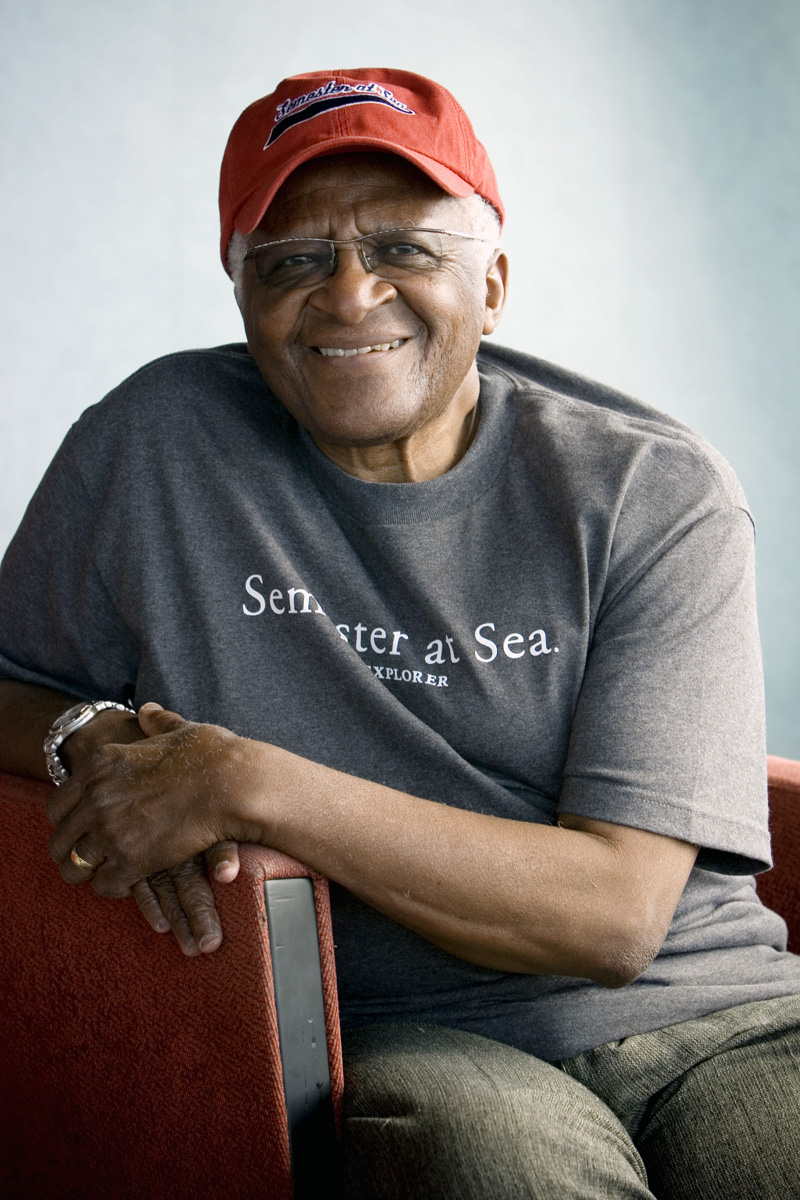 September 26, 2006 — Nobel Peace Prize Winner Archbishop Desmond Tutu will serve as “Distinguished Lecturer in Residence” for the Semester at Sea program and will sail aboard the MV Explorer as it circumnavigates the globe during the entire Spring 2007 semester voyage.

The announcement was made by Les McCabe, president of the Institute for Shipboard Education, which administers the Semester at Sea program. The University of Virginia is the academic sponsor.

Archbishop Tutu will join approximately 600 undergraduate students from colleges and universities from around the world for the 100-day voyage.  Not only will the Archbishop interact with students on an informal basis throughout the semester, but he will also be guest lecturer in many courses in various disciplines including anthropology, history, religion, and political science.

The itinerary for the voyage includes six days in Cape Town, South Africa, and Archbishop Tutu will present a series of “interport” lectures as the ship sails from Brazil to South Africa.  In addition, his presence will be keenly felt in the global studies program that is appropriately themed “Patterns of Conflict and Paths to Peace in a Diverse World.”

“I have had and will have again this coming spring the good fortune to be a small part of a wonderful experiment in education called Semester at Sea,” explained Archbishop Tutu, who won the Nobel Peace Prize in 1984.  “The mission of this grand experiment has been to foster greater intercultural understanding by exposing its participants—young and old, students and faculty—to people and cultures around the world while providing them with a sea-going classroom in which to study and absorb what they’ve seen and learned.

“In the great ocean of human affairs, this idea may seem like a small fish, but one fish can reach others and those others can reach still more until the great web of understanding and enlightenment spreads out to encircle the globe.  Only in that way can we move beyond our fears and learn, finally, to live in harmony with ourselves and our planet.”

Archbishop Tutu has participated in the Semester at Sea program on numerous occasions in the past, sailing on partial voyages in both 1984 and 2005 and speaking to the students in Cape Town on other occasions.  This will be the first time he has participated in an entire voyage.

According to SAS president McCabe, Tutu’s presence on board the ship for 100 days will be life-changing. “I was fortunate to be a participant on the Archbishop’s first voyage with Semester at Sea in 1992 and to witness how transformative his presence on board was for many students in just 10 short days,” he says.  “I can only imagine the impact he will have on students for an entire voyage around the world.  Given the critical role South Africa has played for years as an important destination on Semester at Seas’ voyages of discovery, having Nobel Laureate Tutu on board the Spring voyage will represent an unparalleled opportunity for our students.  They will personally interact with and learn from a world renowned figure who served as a powerful force in breaking down apartheid and also as a model to humanity through his leadership of the Truth and Reconciliation Commission.”

"It is with very real pleasure that The University of Virginia shares in the excitement and remarkable announcement that the Archbishop Tutu will dedicate 100 days, the entire Spring 2007 voyage, to sail with, live with, teach and mentor students and faculty participating in the Semester at Sea Program," said Leigh Grossman, vice provost of international affairs at U.Va. "The fact that this Nobel Laureate and spokesman for global peace and human understanding has chosen to dedicate a full semester of teaching to the Semester at Sea Program is, in and of itself, an incredible gift to the students and faculty fortunate enough to travel with him, but also a wonderful comment on the value of this very special program."

More than 45,000 students have participated since the Semester at Sea® program began in 1963.  Courses offered are fully transferable to the student’s home institution.  Students choose from more than 75 lower and upper division courses during the fall/spring terms and approximately 40 during the summer session that include a wide variety of disciplines. Classes meet daily while the ship is at sea.  The faculty is comprised of visiting professors from institutions across the U.S. and abroad. All have extensive international experience that serves to further integrate course content with the countries on the itinerary.

When in port, students choose from a wide range of structured travel opportunities that are
developed by the Institute and the faculty.  Students may also choose to travel independently.  Each class has a field component requirement that the student must complete during the voyage.  Students satisfy the class field requirements by completing assignments during their in-country travel experiences.  Activities in port can include home stays with families in the countries; visits to universities; travel to places of historic, cultural and religious significance; or simply experiencing life in the cities and rural areas.  Port visits range from three to five days.

Netflix to Add Ads. Why This Could Be a ‘Game-Changer’ for Your Viewing Experience END_OF_DOCUMENT_TOKEN_TO_BE_REPLACED

What’s Next for UVA’s Class of 2022? END_OF_DOCUMENT_TOKEN_TO_BE_REPLACED