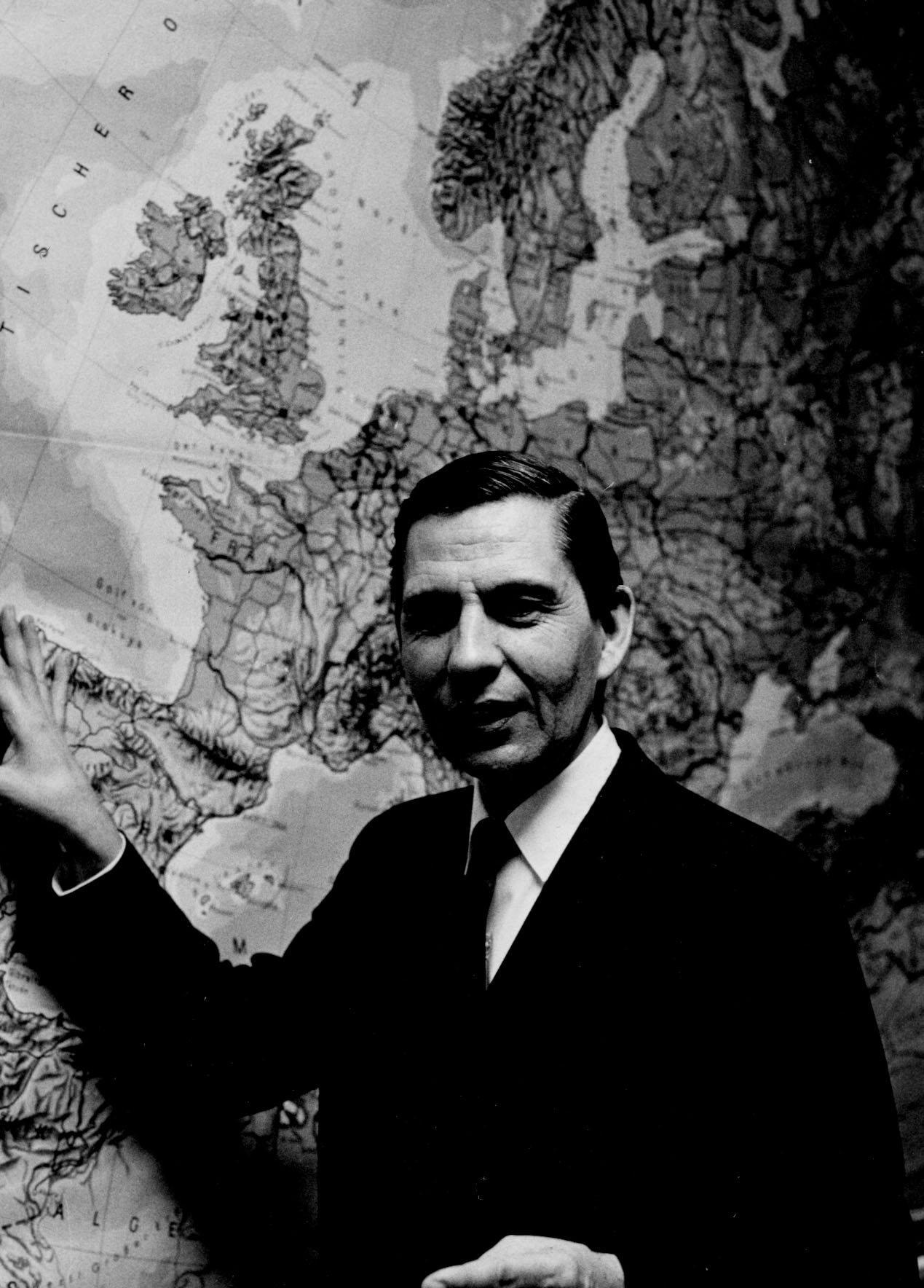 May 12, 2010 — Norman A. Graebner, a retired University of Virginia professor renowned for his expertise in the history of American diplomacy and his skill as a teacher died May 10 at the Colonnades in Charlottesville. He was 94.

Graebner joined the U.Va. faculty in 1967 as the Edward R. Stettinius Professor of Modern American History and became the Randolph P. Compton Professor in 1982. He retired from the classroom in 1986 as professor emeritus of history.

For many years, his popular course on the history of American diplomacy regularly filled U.Va. lecture halls. "A legend at the University," read a Student Council report in 1986. "Mr. Graebner is U.S. diplomatic history. Unanimously praised by all his students, 'Stormin' Norman' Graebner is a captivating and exciting lecturer."

"He has lived the scholar's life with qualities of intellectual rigor, human kindness and collegiality that few can equal," President John T. Casteen III said. "He was an exciting, always brilliant teacher. His articles and books define excellence in historical scholarship. His kindness, lust for life, and fundamental decency have inspired and empowered two long generations of U.Va. students and faculty members and of his colleagues everywhere.

"In an age when the term 'gentleman and scholar' may be used loosely, he was the real thing."

Although Graebner wrote, co-wrote or edited more than 20 books, mostly in the field of American diplomatic history, teaching always dominated his life and brought him his most cherished rewards, he recalled in his 2002 autobiography, "A Twentieth-Century Odyssey: Memoir of a Life in Academe."

Larry J. Sabato, Commonwealth Professor of Politics who attended U.Va. as an undergraduate, said that 40 years after hearing Graebner lecture, he can still recall not only the themes, but also details of his presentations.

"I have never heard an instructor give such spellbinding addresses," he said. "Norman understood diplomatic history as few ever have, and he drew the field's lessons for his students vividly and unforgettably."

Doug Holladay of Atlanta, a 1969 history graduate of the College of Arts & Sciences and '76 Darden School of Business alumnus, was a student in Graebner's first class. It remains, he said, the high point of his academic career.

"It was not just the subject. It was also the energy and the passion that he would communicate to us," he said.

Graebner married Mary Moon, Holladay's mother-in-law, in 2004, and Holladay was glad for the opportunity to get reacquainted with a favorite professor. "At 94 1/2, Norman was clear as a bell," he said. "We would talk until 1 a.m. about events in Afghanistan and Iraq."

Norman Arthur Graebner was born in Kingman, Kan., on Oct. 19, 1915, the son of the late Rudolph Graebner and Helen Brauer and the descendant of a long line of Lutheran clerics. After receiving his bachelor's degree from Milwaukee State Teachers College and his master's from the University of Oklahoma, he served in the U.S. Army during World War II.

After the war, he resumed his studies and earned his doctorate in 1949 from the University of Chicago.

When U.Va.'s Center for Advanced Studies recruited Graebner in 1967 as its first humanities professor, Illinois students demonstrated, "and university administrators at Urbana were indignant that one of their most brilliant lecturers and seminar conductors had been lured away," wrote Virginius Dabney in "Mr. Jefferson's University."

Mel Leffler, the current Stettinius Professor, said Graebner was one of the most influential historians of American foreign relations of his generation.

"His books and articles shaped the field of diplomatic history, and contributed mightily to what was called the 'realist' critique of American foreign relations," he said. "He will be sorely missed, for he was a great gentleman as well as a renowned scholar and teacher."

Leffler explained that the realist critique argues that American foreign relations has sometimes been unrealistic – even flawed – because it had been shaped by ideas, ideals, ideologies and domestic public opinion rather than by a realistic assessment of interests.

In his 1955 book, "Empire of the Pacific," Graebner argued that America's westward expansion was less about "manifest destiny" and more about President James K. Polk striving to control the ports of San Diego, San Francisco and the Puget Sound. "U.S. policy, Graebner insisted, was motivated not by some frontier fantasy, but by hard, realistic, narrow national interests: a few ports that would give the United States a new, powerful geopolitical and commercial hold on the Pacific rim so it could better militarily contain, and economically compete with, the hated British," wrote Walter Lafeber in a review of Graebner's autobiography.

Graebner explored the same theme in his 1976 Fall Convocation address. America's founding fathers, he said, saw that "a world of national sovereignties, with each responsible only to itself, left little room for trust, except to trust that nations would be guided by their own interests."

A frequent speaker at the Miller Center of Public Affairs, he presented forums ranging from "Four Virginia Historians on Their Presidents" in 1980 to "The War on Terrorism: Forgotten Lessons from the Cold War" in 2002. David Coleman, an associate professor at the Miller Center who also specializes in diplomatic history, said Graebner was on his dissertation committee. "He was a remarkable scholar even in his later years, sharp and incisive," Coleman said.

Graebner's University honors included the Thomas Jefferson Award, as well as awards from the Alumni Association, IMP Society, Z Society, Jefferson Scholars and Raven Society. Nationally, he was a fellow of the American Academy of Arts and Sciences and was elected to the Society of American Historians.

He was preceded in death by a sister, Agnes, and a brother, Richard, as well as two wives, Laura Baum, who died in 1997, and Jane Shannon, who died in 2002. He is survived by his wife, Mary Moon Graebner, her six children and their spouses, and 13 grandchildren; Jane's two daughters and their children and grandchildren; a son, the Rev. N. Brooks Graebner of Hillsborough, N.C., his wife, Chris, and their son, Martin; a daughter, Emily Tillotson of Rapid City, S.D., her husband, Dr. Loyal Tillotson, and their two children, Genevieve Anne and Loyal Andrew.

A memorial service will be held on June 7 at 2 p.m. in the U.Va. Chapel, with the Rev. R. Ellen White of St. Anne's Parish officiating. Burial will be private.

What Is the ‘4th Side’? END_OF_DOCUMENT_TOKEN_TO_BE_REPLACED