Notre Dame: What Saved It, What It Represents and How It Might be Restored 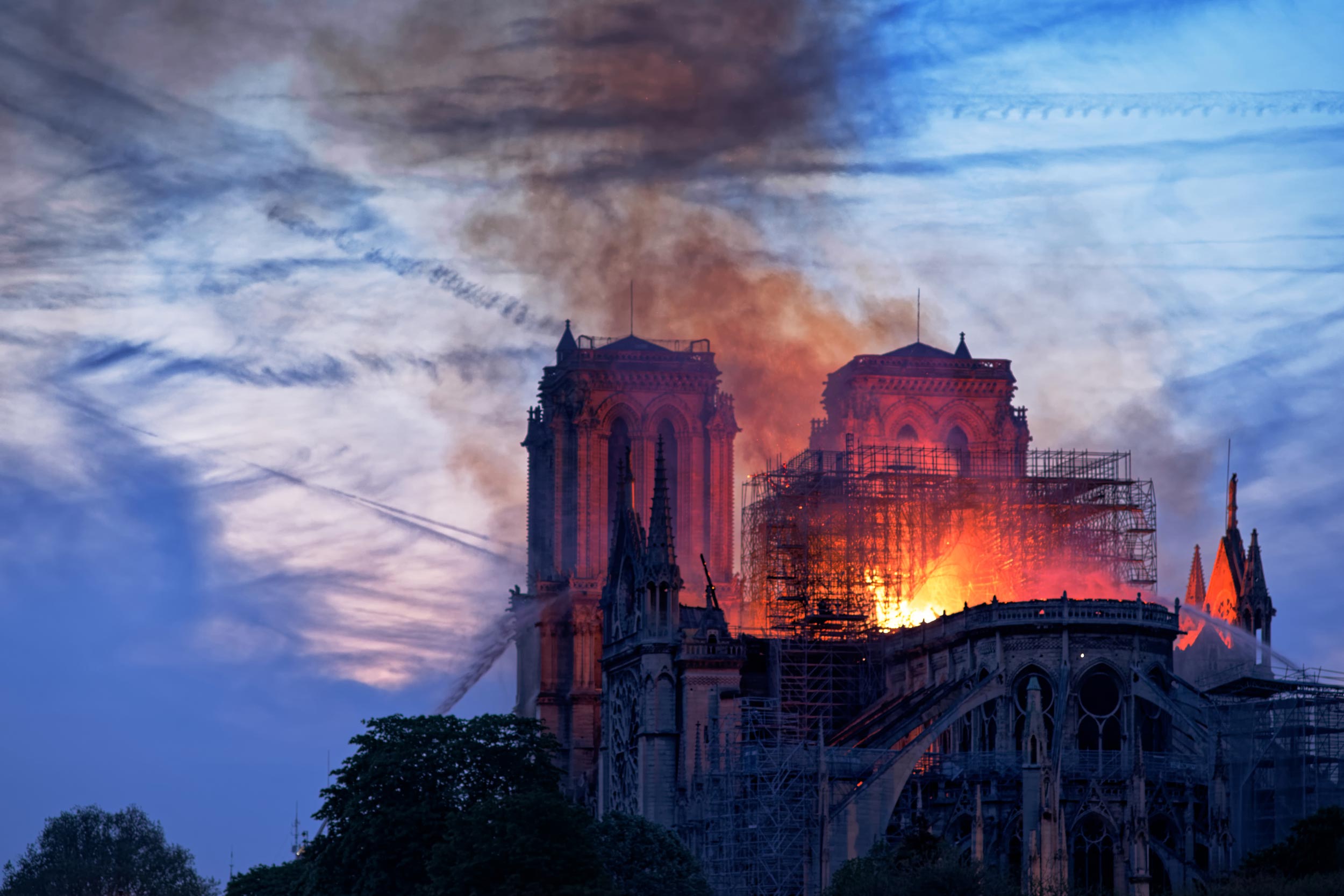 On Monday, the world watched in shock and sadness as Notre Dame Cathedral, a Gothic masterpiece at the physical and symbolic heart of Paris, burned.

The 800-year-old structure, built in the 12th and 13th centuries, was significantly damaged by what officials believe was an accidental fire started amid restoration work. The destruction was not total, however.

Though the cathedral’s roof and spire were largely lost, the sanctuary remained mostly intact and many of the artworks and relics it held – including part of the crown of thorns that some believe to have been worn by Jesus Christ during his crucifixion – were saved or can be restored. French President Emmanuel Macron has promised to rebuild the cathedral, which has long served as a magnificent centerpiece of France and of the global Catholic Church, and many private donors, corporations and foundations have already pledged assistance.

University of Virginia professors Lisa Reilly and Nichole Flores were among those monitoring the fire and its aftermath. Reilly is a professor the School of Architecture, specializing in medieval visual culture; Flores is a religious studies professor focusing on Catholicism and its connections to modern social and political thought.

We spoke with them both on Tuesday to discuss the architectural and religious significance of the cathedral and considerations for its restoration.

Q. How did the architecture of the cathedral influence the path of the fire Monday?

Reilly: At Notre Dame, as with other cathedrals of the time, there is a network of wooden trusses above the stone ceiling, supporting the steeply pitched roof that was designed to move water and snow away from the building through the system of drains and gargoyles. 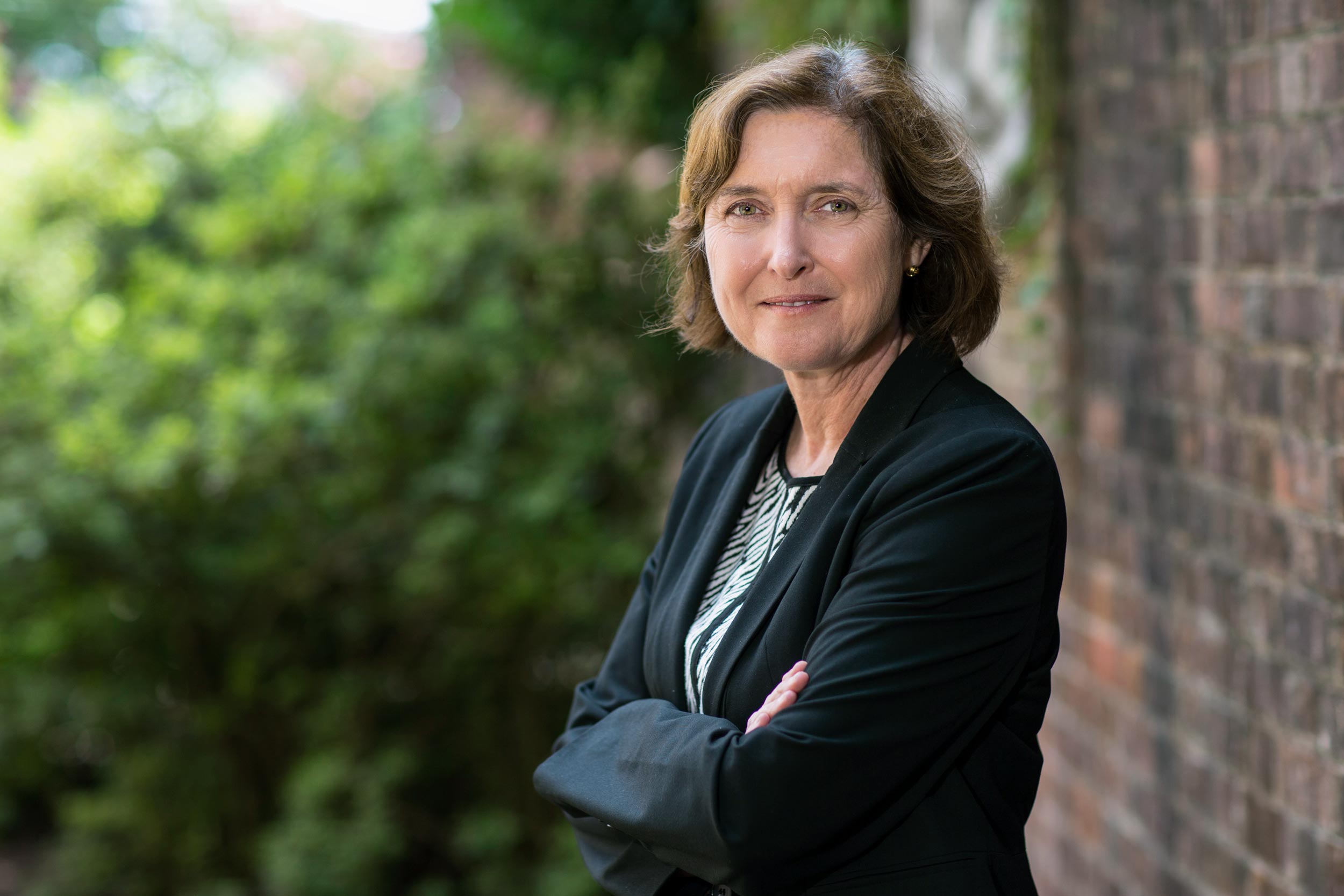 Lisa Reilly is an associate professor and directs the undergraduate program in architectural history in UVA’s School of Architecture. (Photo by Dan Addison, University Communications)

Those wooden tresses fueled the fire, but the separation of wood and stone vaulting worked as intended, actually. Fire was a huge problem in the Middle Ages, as people relied on it for heat and used oil lamps and candles [as lighting]. Separating the stone covering from the wooden tresses seems quite intentional on the part of the architects, and it largely kept the fire from spreading from the wooden part of the building to the stone part.

Q. What does Notre Dame symbolize for the Catholic Church?

Flores: Many commentators discussed its significance as an artistic, historical and cultural landmark, but it is also very much a practicing Catholic church and a site of significance for the global Catholic Church. In Catholic theology, cathedrals are not simply buildings that hold people who pray; they are physical expressions of theology. The intricacy of Gothic architecture in particular mirrors all of the nuances of Catholic theology.

Additionally, the church’s view of sacraments gives larger spiritual significance to ordinary matter, including buildings. Watching Notre Dame burn, many Catholics felt they were watching much more than just a building being destroyed. 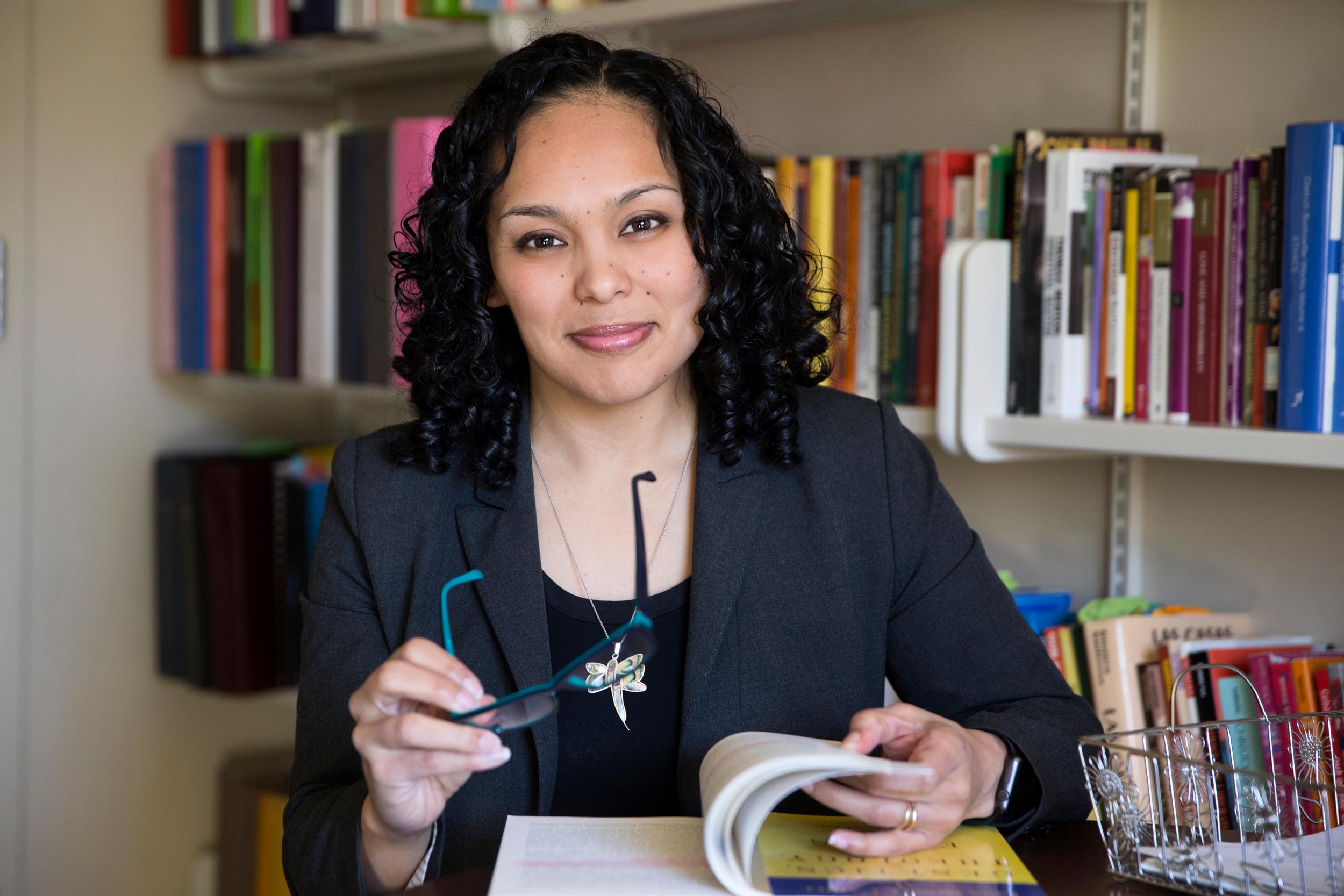 Even beyond its religious significance, a colleague raised the point that the building of cathedrals represents a longing from people, even those with limited resources, to contribute to projects that convey beauty in the world. Beyond the experience of beauty and joy that Catholics have had in this space, so many, regardless of religious background, have been moved by Notre Dame’s beauty. That is at the heart of the outpouring of emotion and sadness we saw yesterday.

Q. What advice do you have for architects and others leading the restoration of the cathedral?

Reilly: For architects, the first step is determining how damaged the stonework was, and how that affects the building’s stability. High temperatures can cause stone to crack, as can pouring cold water on hot stone. At this point, the walls are still standing, but architects will need to make sure they are strong enough to hold any roof that is put on.

It does not look like the buttresses, which form the building’s exoskeleton, were damaged, but those will need to be evaluated as well. Part of the vault and the crossing tower did go, so that will need to be stabilized until it can be repaired.

Flores: There are a lot of ethical considerations as well. What does it mean to restore Notre Dame, a building that has changed so much over time? What should be restored and how?

Overnight, a lot of money has been received in pledges toward restoring this beautiful site of history and faith. That is encouraging, but also raises questions about how we distribute our resources. Many organizations, religious and nonreligious, are fighting poverty around the world and would struggle to raise that kind of money over years. How do we distribute our resources between these landmarks of human and religious history, and very real human needs of today? Those questions are already being raised and will keep coming up.

In addition, even as the global community focuses on Notre Dame, there are churches, mosques and temples being desecrated and burned around the world. What does it mean to preserve a space like Notre Dame in light of the violence being done to other religious communities around the world, especially marginalized communities?

Those are all crucial questions moving forward.

Q. What examples does history offer us, including UVA’s own restoration efforts after the Rotunda fire in 1895?

Reilly: In terms of cathedrals, I look to the Reims Cathedral [in Reims, France]. Its roof was largely destroyed during World War I, and though it took 20 years, France was able to rebuild it. They certainly have the same will to rebuild now, and more resources.

The Rotunda is a much smaller building than Notre Dame, but in some ways the damage from that fire was even more substantial, because the interior was entirely gutted. It shows us that even buildings damaged that badly can be rebuilt and their restoration can actually teach us something about the architecture. With the roof gone, architects can learn a lot about the interior structure of Notre Dame, and that can help them better understand and better rebuild the building.

The recent Rotunda renovation was similarly revealing, and at the end of it all, the Rotunda still stands at the center of the University today. 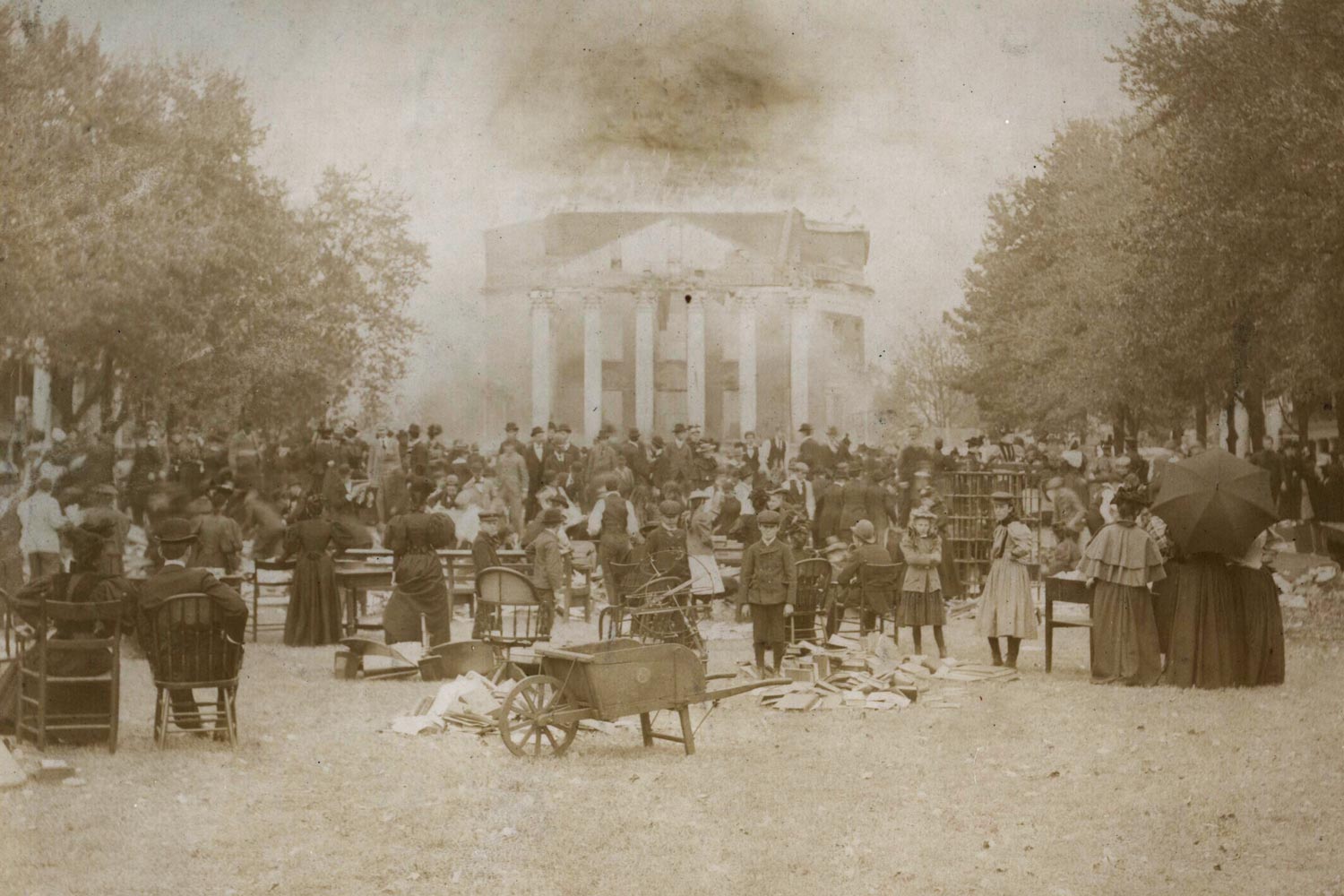 Faulty wiring was blamed for an October 27, 1895 fire that almost destroyed the Rotunda in its entirety. (Image: UVA Albert and Shirley Small Special Collections Library)

Flores: The Rotunda, with its complicated history, is subject to some of the same questions about its importance in the life of community as Notre Dame is. I had the incredible experience of teaching a class in the Rotunda the year it reopened, and experiencing the beauty of that space made me feel like I had a place at the heart of the University. However, like Notre Dame, it is a space that we continue to invest in and preserve while also revisiting its history and asking tough questions about the ideologies that fueled the system under which it was built.

For Notre Dame, this might be an opportunity to think more about how the cathedral was built, who built it, and what their lives were like. How did ordinary people in the Middle Ages – Christians who made the pilgrimage there; those who helped lay its foundation – how were they involved with the cathedral’s life? What did it mean to them?