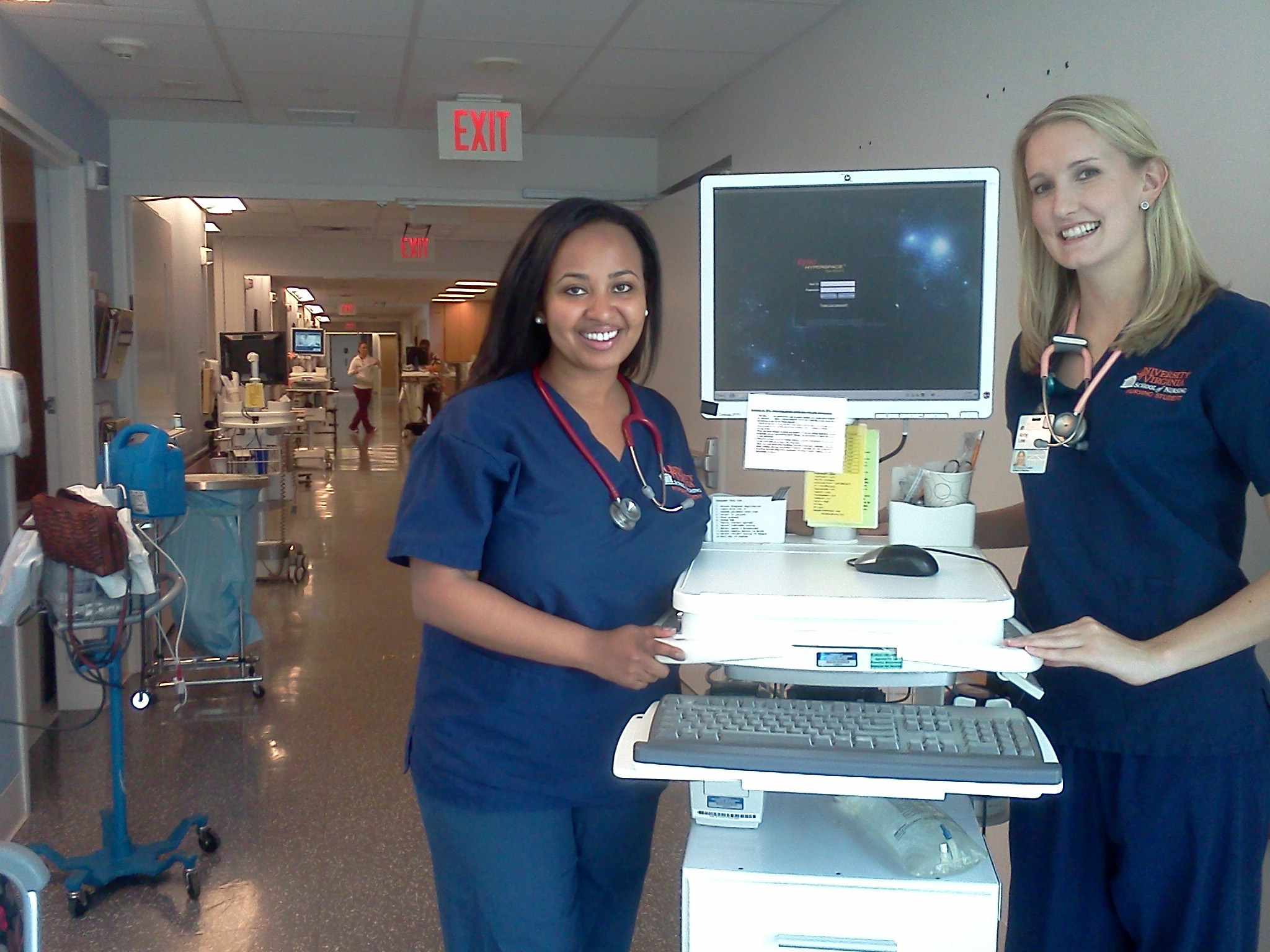 June 4, 2012 — Given the amount of time they spend with patients, it's nurses more often than physicians who tend to a patient's pain. But few studies have shown how nurses can work with patients to best determine that degree of pain – and what effect standardizing these interactions has on keeping the hurt at bay while boosting patients' agency in, and satisfaction with, their pain management.

That's the aim of a new project by University of Virginia School of Nursing master's students Blen Afework and Amy Lee. They're trying to discern whether providing a script – a printed card offering nurses specific language to query patients about their pain – will ultimately translate into higher patient satisfaction with pain management.

"Nurses own pain," explained Nancy Eksterowicz, an advanced practice nurse who specializes in pain management at the UVA Medical Center and who oversaw Afework and Lee's work. "Doctors say, 'How can that be? We're writing the prescriptions.' But nursing is about providing comfort to our patients. We witness the suffering and hear their stories, and it's vital that nursing students feel comfortable talking to the patients about their pain."

The project, part of Afework and Lee's capstone project, is also part of a push from the hospital to improve patient satisfaction with pain management.

"What we want to know is, 'Can changing nursing culture and practice improve what happens to our patients, and their experience here?'" Eksterowicz said.

Afework and Lee used the American Pain Society Revised Patient Outcome Questionnaire, a standard pain assessment tool implemented across the U.S. in 2000, to measure patient satisfaction with pain management. Half of the nurses who participated in the project used a script to talk with patients about pain, while the other half used the standard method. Patients in the scripted group were given specifics about their medications and dosage schedule, asked whether pain had impacted their mobility, asked whether their disposition had darkened since arriving in the hospital, whether they felt happy with the approach to pain management, and whether they'd attempted non-pharmacologic approaches – walking, music, meditation, massage, among other tactics – to lessen its severity.

The script was affixed to the nurses' mobile workstation on a laminated card. Nurses asked their patients all five of the questions, as closely to the original text as possible, at some point during their shifts.

Twenty-nine patients were selected for the project on two adult units, general medicine floors with a broad mix of patients and ailments. At the end of their hospital stay, all patients were queried about satisfaction with pain management using the script. After seven weeks, Afework and Lee followed up with the patient satisfaction survey again to see whether it boosted satisfaction scores.

Those who received the pain script ranked their pain management an average of 8.27 out of a possible 10 points, 23 percent higher than the 6.33 baseline.

In the unit where no scripting took place and standard protocol was followed, patient satisfaction with pain management actually declined, from a baseline of 9.5 to 8.64 out of 10 points, a 9 percent decrease, despite their having received general education about pain.

Though Afework and Lee graduated in May, Eksterowicz said they've laid the groundwork for ongoing discussions about how to change nursing protocol when it comes to pain management. Though preliminary, their project's early findings offer a possible route for UVA Medical Center to boost its pain management scores.

"Their work uncovers more questions than it answers," Eksterowicz said, "and while we can't draw any concrete conclusions, it poses suggestions for what could be done next."

For Afework and Lee, the assessment informs their practice going forward.

"There are many different layers of pain management that I've come to appreciate," said Afework, of Ethiopia and Alexandria, who came to the Clinical Nurse Leader program after earning a B.A. in Spanish and bioethics from UVA's College of Arts & Sciences in 2009. "And the consequences of untreated pain – increased length of stay, decreased healing, psychological issues – are huge. I'm always going to think about pain first."

"As a nurse on a busy unit, it's important to prioritize tasks and get information about a patient's assessments," added Lee, of Westport, Conn., who came to the Clinical Nurse Leader program in 2010 with a history degree. "Many people say what I believe now: that pain is the fifth vital sign."

Should Alcohol Have Warning Labels About Cancer Risk? Most Americans Say ‘Yes’ END_OF_DOCUMENT_TOKEN_TO_BE_REPLACED