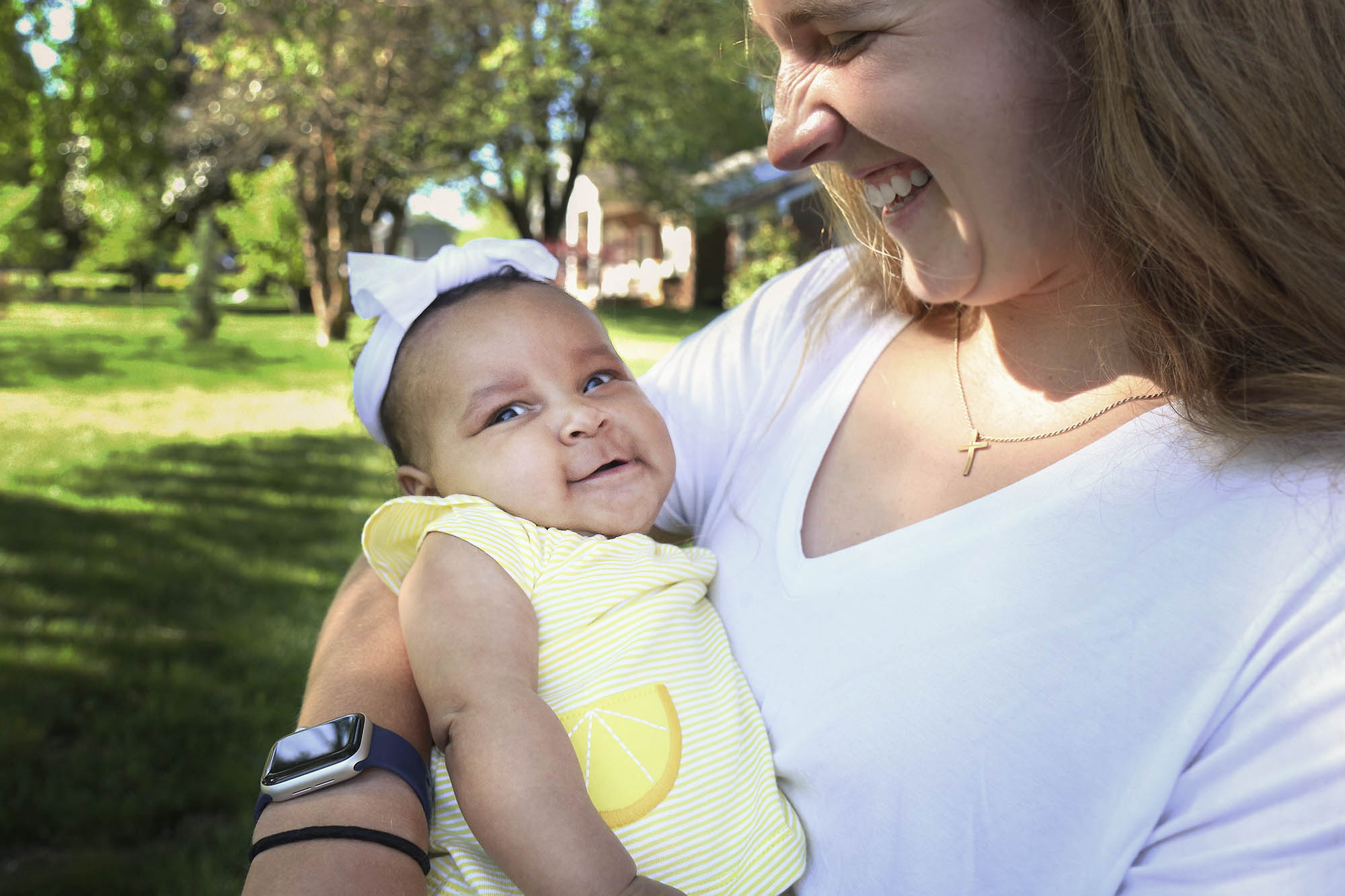 When third-year University of Virginia nursing student Madi Wilson woke up that chilly late February morning, Rachelle Aurand – who lives nearly an hour outside of Charlottesville in Louisa and was 38 1/2 weeks pregnant – was already in labor.

Wilson showered and donned her blue nursing scrubs, readying herself for her first-ever clinical rotation in labor and delivery; across town, Aurand and her husband had already arrived at Sentara Martha Jefferson Hospital.

Aurand – who’d suffered a miscarriage a year earlier with the pre-term birth of her baby, Noelle – had carried this child to term, and was already 4 centimeters dilated and in active labor when she met the freshly arrived Wilson, Sentara nurse and preceptor Elizabeth Eldredge and UVA clinical instructor Suzanne Wentworth, on the unit.

To speed her labor, doctors administered Pitocin, and expected the Aurands’ baby to be born within an hour or two, but as morning turned to afternoon, it was clear the delivery wasn’t progressing. Aurand, awash in pain, had a low platelet count that, combined with her health history, made her ineligible for a pain-blocking epidural. Her nurses administered laughing gas to ease the process, but as Aurand’s contractions grew stronger into the afternoon, the pain overwhelmed her, causing even her hearing to waft in and out.

Following Eldredge’s lead, Wilson helped Aurand repeatedly change positions to increase her comfort, gently easing her onto a soft birthing ball, onto all fours, and onto her side to encourage the baby’s exit, all the while whispering encouragement, praise and support in her ear. The hours passed. By late afternoon, the labor dragged on.

As the rest of the third-year nursing students filed out after their shift, around 3 p.m., Wilson remained by Aurand’s side, determined to see her patient through, something that “felt natural” to Wilson, who continued to encourage Aurand, complimenting her on her strength and reminding her that her baby girl was nearly there.

“It was such an incredible learning experience,” Wilson said, “and while I definitely felt a little nervous at the beginning, throughout the day, it felt right to be able to keep saying, ‘How can I help you next?’”

It was only as the sun went down, after more than 12 hours of labor, that Brielle Michaela Aurand – a healthy 8-pound girl with a mass of silky black curls – was born. The experience was, as Wilson later recounted, “incredible.” 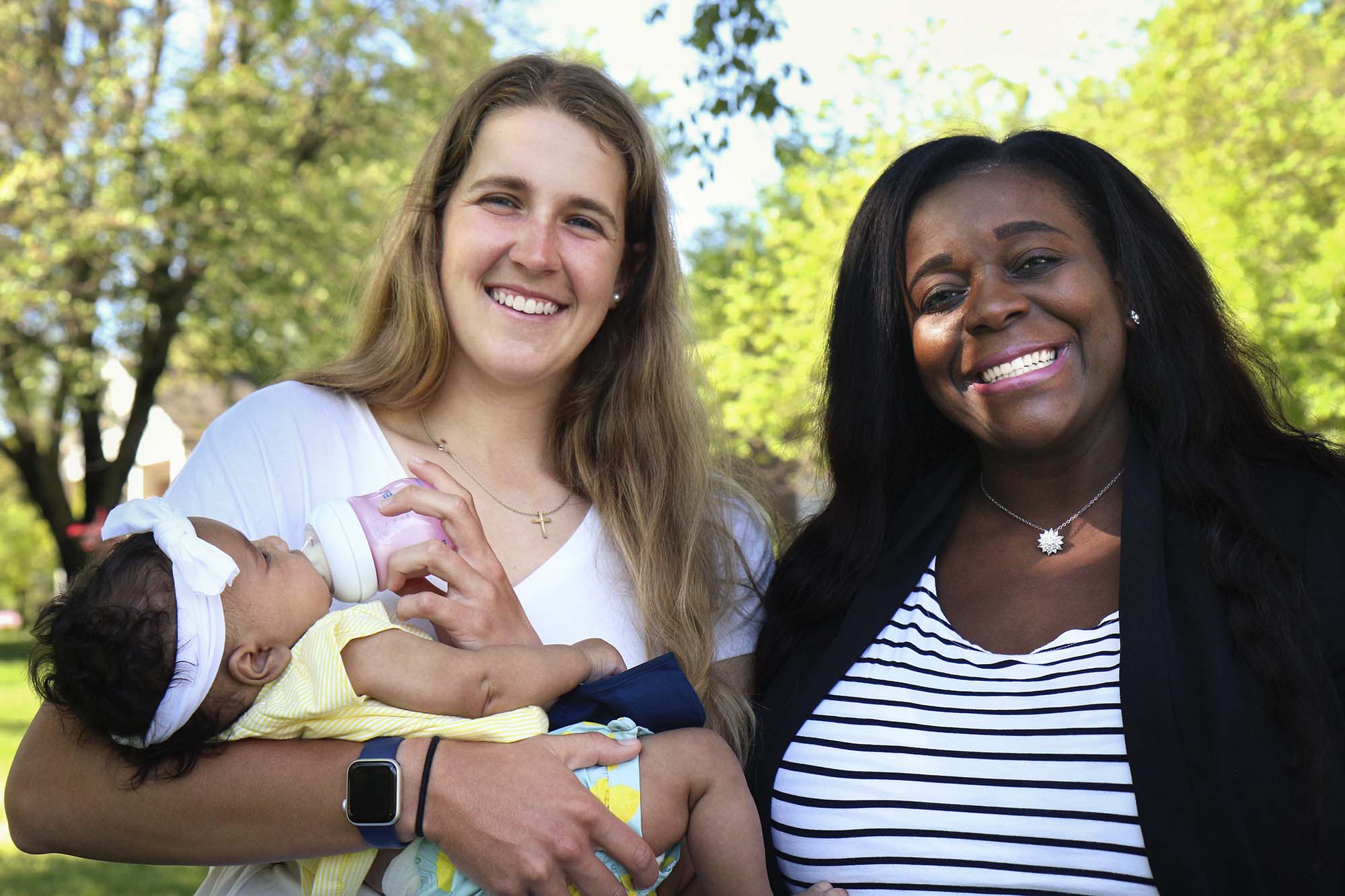 “When the baby came, I cried a little,” said Wilson, who plays for UVA’s softball team and grew up in Suffolk. “It’d been such a long and grueling day for Rachelle, and seeing this tiny little human being brought into the world … it was just amazing. Rachelle handled the entire process with such grace. I will never, never forget them.”

When Wilson received Aurand’s thank-you note through Wentworth in late April, she was touched, and eager to reunite, which they did late last week. Because both are vaccinated, Wilson was able to hold Brielle, now 2 months old and more than 12 pounds, and visit with Aurand outside.

“Compassion is not something you can teach; neither is empathy,” said Aurand, who noted that the name Brielle derives from the Hebrew word for strength. “Some people you meet, they make a lasting imprint. That’s true of Madi. I’ll never forget her.”

What’s Next for UVA’s Class of 2022? END_OF_DOCUMENT_TOKEN_TO_BE_REPLACED