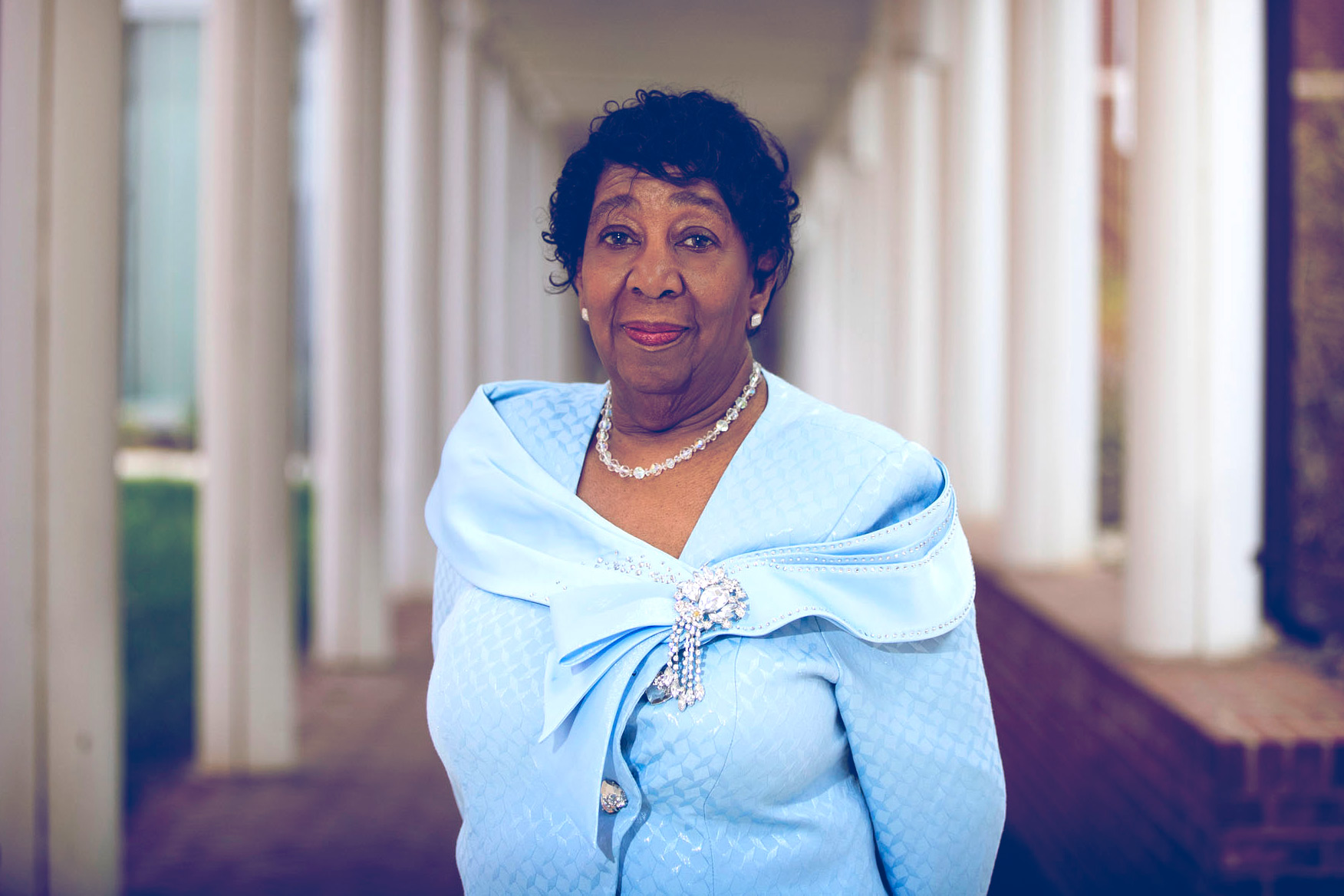 More than 300 people crowded into McLeod Auditorium at the University of Virginia’s School of Nursing on Friday to honor the school’s first African-American enrollee and graduate, Mavis Claytor. She charmed the audience, joked and told stories of her family, her early education in segregated Virginia and the hurdles and triumphs she faced during integration, and at UVA.

Claytor, who earned a Bachelor of Science in Nursing in 1970 and a master’s from the School in 1985, first arrived at UVA in 1968 as a transfer student from Roanoke College, the same year that the Rev. Dr. Martin Luther King Jr. was assassinated and James Meredith, the first black man to attend the University of Mississippi, was shot on a march through that state.

Nursing doctoral student Tori Tucker – who earned her bachelor’s in nursing 42 years after Claytor – interviewed the now-retired veteran nurse on stage as part of the 2017 Catherine Strader McGehee Memorial Lecture. 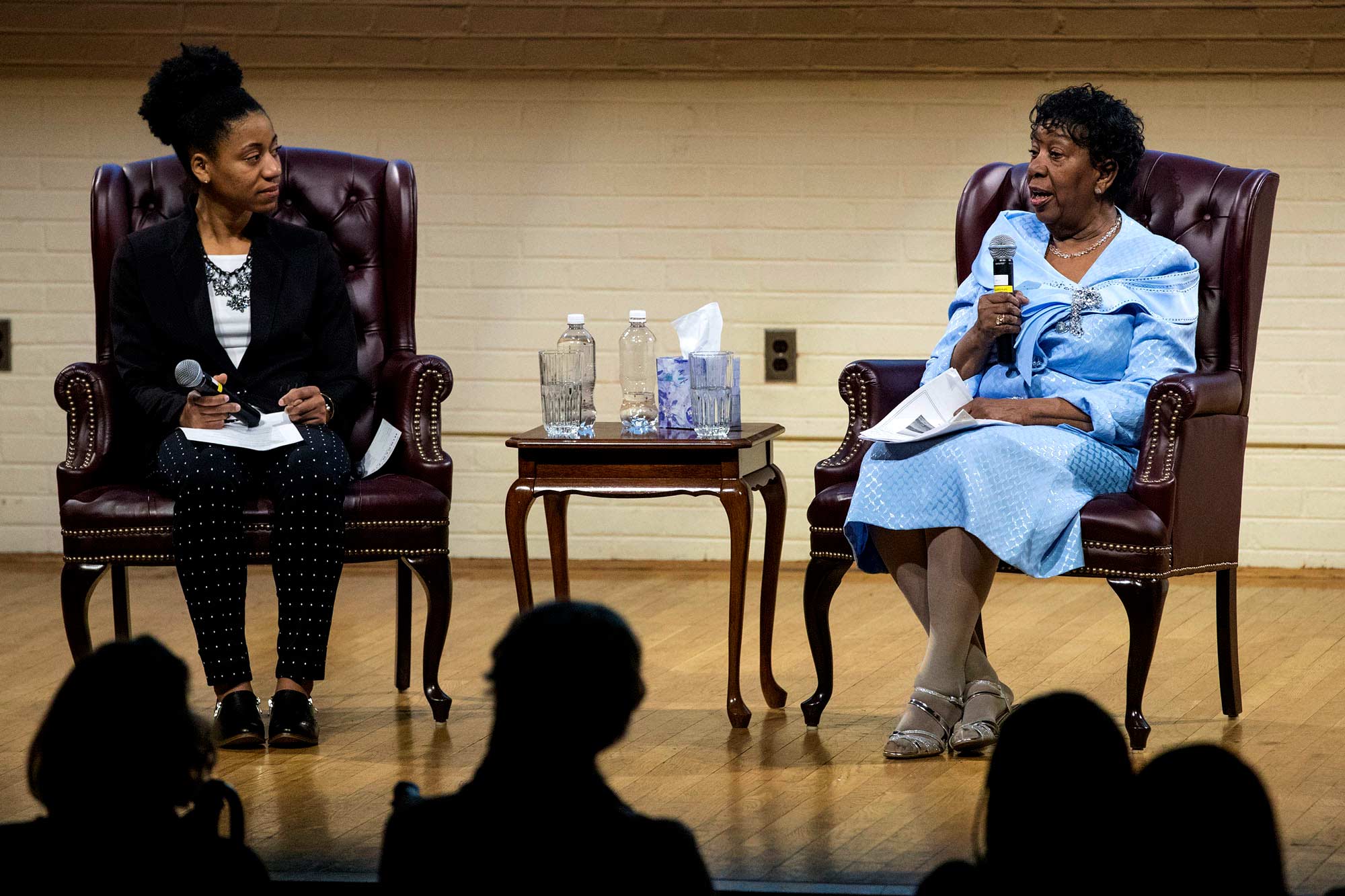 Tori Tucker: We'll begin our journey in Franklin County, Virginia, where you grew up. Could you share what your experience was like there? Who were you surrounded by?

Mavis Claytor: It’s a rural county in Southwest Virginia. I lived on about a 30-acre farm with my grandparents and parents. ... It was hard work there, we cared for all of the farm animals, and I was a part of that, being one of the older children. ... I had six siblings.

After school, we’d go to Walker’s Grocery, about a mile from my home, to get candy and snacks; at that time, the owner would keep a log of what we purchased. Once a month, he’d give the bill to my grandfather, who would pay that bill. We never signed anything, no contracts or anything, and when I came to Roanoke to go to school, everything had to be signed on the dotted line. I couldn’t imagine that.

TT: You mentioned your grandfather, Wyatt Smith, who had once been enslaved. But in 1865, when slavery was abolished, he gained his freedom.

MC: Yes. My grandfather grew up during slavery time, and later bought the land that we are now living on. He instilled in us wonderful values – taught us to love ourselves, love others, not to criticize others. ... He taught us to be compassionate, and, of course, he taught us a lot about farming and caring for the animals there.

TT: You also learned a lot at Liam Waid School, a segregated school for students in Roanoke that had first through 12th grades.

MC: One of the main things I loved about school was it got me out of the farm work whenever I attended, so I very seldom missed a day. I loved learning, I enjoyed science; we had home economics, the Glee Club. I stayed busy as much as I could so I wouldn’t have to do the farm work.

TT: The teachers were all black teachers. What lessons did they impart?

MC: They encouraged us to excel in whatever endeavor we would take on, ... that we were accepted and valued. Some of them traveled 35 miles to teach us. We loved having them there, and learning. They also brought extras, like sports.

TT: At 16, you cared for your grandmother.

MC: That’s right. I stayed with my grandmother at night, after school. She was 85, and had some difficulty taking care of herself, so I assisted with that. Then, suddenly, she had a stroke, and I was so upset and felt so inadequate that I couldn’t provide the needed care, I decided at that point to become a nurse, so I’d never have that feeling again. I stayed with her all of those years, even after her illness. ... And it was really that that started me on my nursing journey.

TT: You went to school at Provident Hospital, a traditionally black hospital in Baltimore. What was that like?

MC: The change in location was a culture shock, going from a rural area to a big city. I’d never been away from home before. ... The food was hard to eat, too. I was used to eating home-cooked foods, and that wasn’t available, and I became so anemic I was admitted to the hospital. My director of nursing at Provident visited and whispered in my ear, “If you don’t eat this food, you’re gonna be on the next bus home.” So I ate, and haven’t stopped since!

TT: Share with us what path you took after graduating from Provident with a licensed practical nursing certificate. ... You decided you were interested in pursuing a bachelor’s in nursing.

MC: [After a brief stint as a surgical nurse at a Roanoke hospital,] I discovered there was so much more I needed to know about nursing. ... At that time, the [registered nurse] was really accepted and respected in my local hospital, but I understood to get higher supervisory and leadership positions, you had to have that B.S.N. or higher. So I returned to school again.

I applied to Roanoke College, and enrolled there, but that was not an accredited school, so I transferred to the University of Virginia.

My mother had borrowed a few dollars for me, and I’d worked as an LPN and made a few dollars, too, but when I arrived here, I did not get a room in the dormitory. So I had to live in a nearby hotel. I was told that there were no rooms available for me, so I stayed in the hotel until my money ran out.

Thinking I had to go back home, I went to Dean of Nursing, Dean Mary Lohr, and explained my situation, and remarkably, that same day, there was a bed for me, and I did not have to go back home.

TT: You could have very easily decided, “I am going to go back home.” What inside allowed you to keep going?

MC: Well, I had faith and courage that there would be possibilities available to me, and I felt that if I expressed my predicament to the dean, things would work out. I’d gone all over the city here, trying to find housing and couldn’t. There would be a sign outside that said, “Vacancy,” and when I went in to inquire, they’d say, “No vacancy. We just filled it.”

TT: Ms. Claytor graduated in 1970, was the first African-American student to be admitted and to graduate from the Nursing School. And just 20 years prior, Mr. [Gregory] Swanson came to the Law School, and he was the first African-American student to be admitted to the University. Desegregation was happening across the University, at different points. I’d like to acknowledge the many applicants who applied and were qualified, but were not admitted because of the color of their skin. So as we honor Ms. Claytor today, we honor those who were not given the opportunity to come.

You were drawn to the geriatric population. Why?

MC: There’s lots of wisdom and knowledge there, [plus] their ability to be compassionate and caring for me also. And I liked trying to make their life a bit easier, especially for daily activities. I felt since I couldn’t assist my grandmother in her time of need, I could assist others.

UVA was wonderful in providing the education and training, and that has been with me all this time. When I graduated from the B.S.N. program, I felt I knew everything.

TT: Tell me what led to the design of the modular bathroom components you’re credited helping with.

MC: I was working in geriatrics at the time and noted that a lot of our patients needed assistance in personal care. They had a hard time getting in and out of our bathtub. So I was determined to find some mechanism to make it easier for them. I was also working with a professor of engineering at Virginia Tech who was a consultant to the [Bureau of Veterans Affairs] at the time, and they were looking for a test site. So I volunteered right away.

We put it on one of our wards. ... We decided to add a few more, and our patients and staff evaluated the bathroom for Virginia Tech, and I understand now there’s a similar tub that has a door that opens before it fills with water. It’s been successful for patients at the VA, and in general. I was proud to have been a part of that.

TT: You have 30 distinguished years at the VA Medical Center in Salem. What advice do you have for nurses entering the field?

MC: I’d say, “You’re embarking on a wonderful and rewarding career. There are no boundaries now in nursing ... and I’m sure your contributions will be invaluable. You’ll be a member of a health care team, and your contributions will always be needed and appreciated. Be compassionate and caring, not only for your patients, but for yourself.

“I did a lot of studying, I prayed, I practiced mindfulness, did many things to help me conquer the stressors of school and the workplace. I’ve done a lot of wonderful things – and you will have wonderful contributions, too, and there will not be any limit to what you will do and accomplish in your career.”