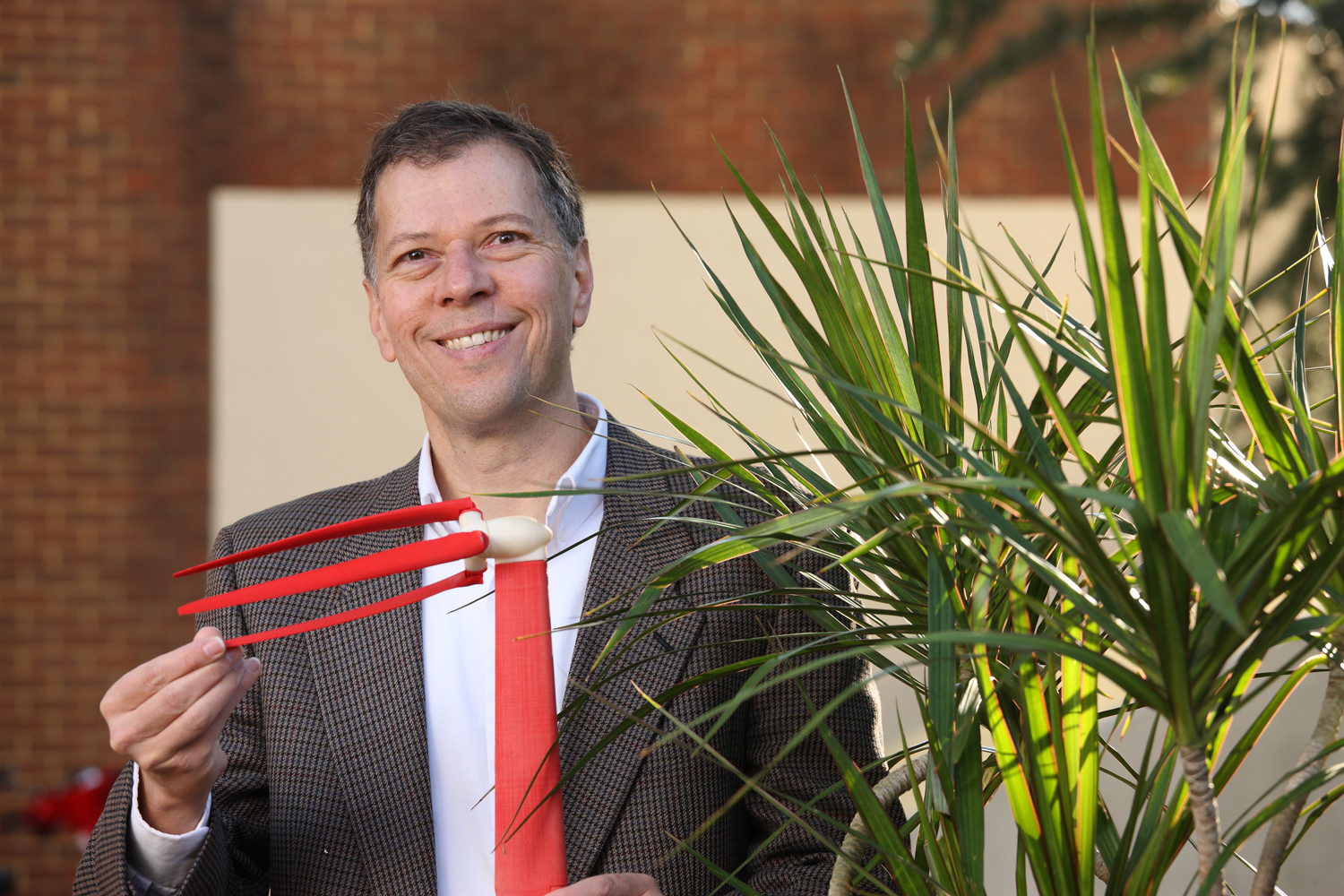 Engineering professor Eric Loth, with a small model, said, “Our turbine design can morph downwind in very high winds and then stow away altogether in a hurricane, unlike conventional wind turbines.” (Photo by Tom Cogill)

In 15 years, a forest of giant wind turbines – able to protect themselves in severe weather by folding in their rotor blades like palm trees in a hurricane ­– could be planted off the coast of Virginia, delivering enough energy to power as many as 500,000 homes, thanks to research that has earned a $3.56 million federal grant for the University of Virginia School of Engineering and Applied Science.

The U.S. Department of Energy’s Advanced Research Projects Agency-Energy awarded the three-year grant to a team led by Professor Eric Loth, chair of the Department of Mechanical and Aerospace Engineering. The team also includes researchers from the University of Illinois, the University of Colorado, the Colorado School of Mines, the National Renewable Energy Laboratory and Sandia National Laboratories. Corporate advisory partners include Dominion Resources, General Electric, Siemens and Vestas.

The team will use the grant to build a small-scale prototype of a new kind of wind turbine with blades that face downwind; the blades spread out to catch the wind during good weather, and fold together like palm fronds in dangerous weather. The design is called a Segmented Ultralight Morphing Rotor – segmented so that the blades can be assembled on site from segments, and ultralight because the blades’ adaptability to the wind flow allows them to have less structural mass.

The concept earned Loth a place on Popular Science’s list of “The Brilliant Minds Behind The New Energy Revolution” in June.

The UVA team’s design would dwarf the largest and most advanced wind turbines in existence or in testing today. Most now are on land, and there are no wind farms offshore of the continental United States. A large offshore wind farm has been commissioned for construction beginning in 2016 off the southern coast of the United Kingdom, and is planned to have 32 turbines sized at 8 megawatts each, equivalent to the power needed for 180,000 homes.

The largest of the UVA team’s wind turbine designs would each produce 50 megawatts of peak power using rotor blades as long as two football fields, which is in a category of what are called “extreme-scale” turbines. While such long blades may be impossibly heavy with conventional configurations, this new design concept may allow extreme-scale rotor blades to be much more lightweight.

Another issue is weather resilience. Although scientists and energy companies long to deploy turbines up and down America’s coastlines, where offshore winds could be turned into staggering amounts of power, no one wants to spend millions of dollars on turbines only to have them wrecked in an ocean storm.

“Palm trees achieve their resilience by a lightweight, segmented trunk structure that can bend in the wind,” Loth said. “They go with the flow. Similarly, our turbine design can morph downwind in very high winds and then stow away altogether in a hurricane, unlike conventional wind turbines.

“We hope our innovative concept will allow us to break through the technology barrier and allow the United States to be the world leader in wind energy.”

According to a Department of Energy news release, “ARPA-E funds innovative technologies that display promise for both technical and commercial impact, but are too early for private-sector investment.” UVA’s grant was part of an announcement of $125 million in grants for 41 projects.

The Bigger Picture: Starry Night in the Rotunda END_OF_DOCUMENT_TOKEN_TO_BE_REPLACED