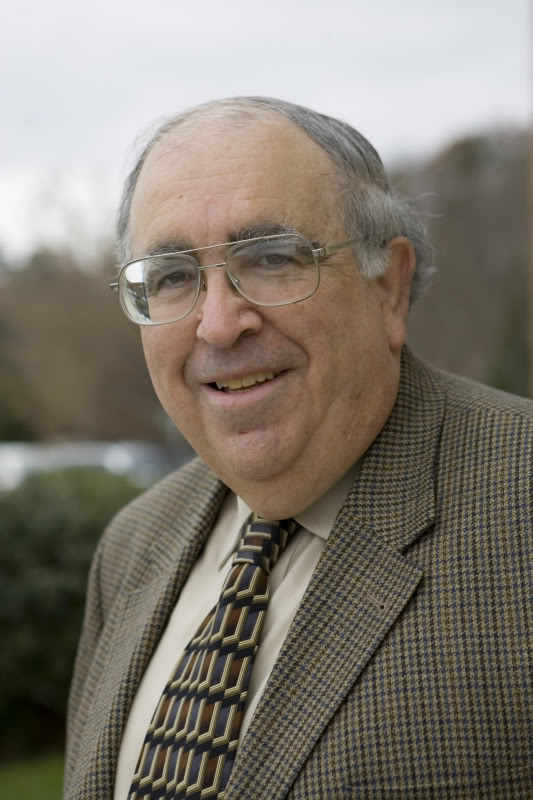 English professor Paul Cantor sees his study of pop culture as a natural exntesion of his more traditional scholarly interests.

Not many professors are praised for their vast knowledge of television shows, as well as their analysis of Shakespeare, but Paul Cantor, Clifton Waller Barrett Professor of English in the University of Virginia’s College of Arts & Sciences, fits that bill.

He moves easily from discussing Shakespeare’s involvement in the popular culture of his time to “South Park” critiques of politics today. A well-respected scholar on a wide range of topics, including Greek tragedy, British Romantic literature and Austrian economics, as well as The Bard’s works, Cantor directs U.Va.’s Comparative Literature program. The Los Angeles Times named his earlier book, “Gilligan Unbound: Pop Culture in the Age of Globalization,” one of the best nonfiction books of 2001. In his new book, “The Invisible Hand in Popular Culture: Liberty vs. Authority in American Film and TV” – “The Invisible Hand” in the book’s title refers to 18th-century political economy pioneer Adam Smith’s metaphor, often interpreted to mean that individuals’ efforts to maximize their own gains in a free market also end up being beneficial to society, even if they have no benevolent intentions – Cantor offers more insights about American films and TV shows that reflect social and political visions, concerns and contradictions. He also continues to write and teach about literature.

UVA Today reached Cantor at Harvard University, his alma mater, where he’s been a visiting professor this fall. He’ll be back in the classroom on Grounds next semester.

Q: What made you want to write this book?

Cantor: When Steve Wrinn, the editor at Rowman & Littlefield who handled my earlier book, “Gilligan Unbound,” became the head of the University Press of Kentucky, he urged me to write another book on popular culture. Since it was a pleasure working with him on the earlier book, and it was generally well-received, I took up his offer. Once I finished a major project – my book, “Literature and the Economics of Liberty” – I set about creating a new book out of a series of essays I’d written about various subjects in pop culture.

All the essays have been carefully rewritten and most of them have been substantially expanded to fit them into a coherent book. I wrote a preface and introductions to each part, which, I hope, unify the essays into a larger narrative about pop culture. It’s a narrative about how freedom has been represented in American pop culture and how the issue of freedom vs. order has been debated over decades in both film and TV.

Q: What made you, a literary scholar, want to study popular culture?

Cantor: I’ve always had a soft spot in my heart for popular culture, especially television. I grew up with television. I particularly like genre material: Westerns, sci-fi, horror stories. I’ve always enjoyed talking about pop culture and gradually came to realize that it is a legitimate object of scholarly analysis.

I found that students respond well to discussions of pop culture, especially in areas where they are familiar with the material. I found that analyzing pop culture is a way of connecting what students think about in their daily lives with what we academics would like them to study in the culture of the past.

Q: What similarities and differences do you find between Shakespeare’s plays and film and TV?

Cantor: Let’s begin with the one big difference – his work is on a higher plane than almost anything you’ll find in film and TV. That’s true when you compare Shakespeare’s work with that in any medium. But Shakespeare was deeply immersed in the popular culture of his day – he was the most financially successful dramatist of the Elizabethan era, and his career followed the logic of popular culture. For example, he wrote sequels when the public demanded them, and he tailored his plays to meet the needs of certain popular performers.

In my view, good narratives are similar in any medium. Thus when film and TV are at their best, they follow the same principles Shakespeare did – they have well-shaped plots, interesting characters and thoughtful reflections on fundamental questions of human existence. It’s rare that works in film and TV achieve these high standards, but then again it was rare among the plays of Shakespeare’s contemporaries as well.

Q: How is analyzing film and TV shows different from analyzing Shakespeare?

Cantor: In most respects, it’s not different at all. You look for the way a given work hangs together and try to figure out what it means.

One difference is that we have a vast body of criticism of Shakespeare’s plays and that can give you a head start on analyzing them. With some of film and TV, especially contemporary material, you’re sometimes the first person to take it seriously. Basically you’re on your own.

My book came out in November; in one footnote, I talk about an episode of “Fringe” that aired in May 2012. I managed to get the note in just as the book was going to typesetting. That’s a pretty fast turnover from a TV episode airing to its being analyzed in a book. I hope I got it right.

At the same time, with contemporary material, we often have interviews and other commentary from the creators that help us understand what they thought they were doing. I’d give anything for one interview with Shakespeare along the lines of “’Hamlet’ – London’s Hottest Playwright Explains the Whole ‘To Be Or Not To Be’ Thing.”

Q: How did you choose which films and TV shows to write about?

Sometimes the process can get really weird. Hillsdale College asked me to speak at a conference on the Western about Gene Roddenberry’s work on “Have Gun-Will Travel.” To this day, I do not know how anyone at Hillsdale could have known that I was interested in this very specific and arcane subject.

When I sat down to create the book, I looked at about 20 essays I’d written on pop culture and ended up choosing 10 that I thought would fit together to create a book. It was thematic coherence – finding the essays that focus on the issue of freedom – that gave me the criterion for choosing among the essays.

Q: The publisher’s description says, “Drawing on the works of John Locke, Adam Smith, Alexis de Tocqueville and other proponents of freedom, Cantor contrasts the classical liberal vision of America – particularly its emphasis on the virtues of spontaneous order – with the Marxist understanding of the ‘culture industry’ and the Hobbesian model of absolute state control.” Can you explain this more simply?

Cantor: My book focuses on two models of order: top-down and bottom-up. In the top-down model, a single person or force controls everything in an act of central planning, forcing everybody into line. In economics, it’s the socialist model of order – that only government planning can create a rational economy. In the bottom-up model, the spontaneous interaction of people produces order in a hit-or-miss, topsy-turvy process – people keep experimenting and the market separates out successes from failures. This is what Adam Smith calls the “invisible hand” and Friedrich Hayek calls “spontaneous order.”

A system that operates on a feedback model is more productive and rational than a system of centralized control. It’s analogous to, though not the same as, the process of evolution as Darwin describes it.

Throughout my book, I’m applying the spontaneous order model to culture. Cultural Marxists believe that films and TV programs are produced in a highly structured process, in which a few business executives make all the creative decisions – that’s why they speak of a “culture industry.” I offer a contrasting bottom-up model of popular culture, in which nobody is in control, and the whole creative process operates on the principle of trial and error. That’s why it occasionally produces works of genuine cultural value.

Q: You also cover the impact of 9/11 on pop culture media in your book, right?

Cantor: My main point is that 9/11 did not have the impact it was supposed to have, according to the media pundits back in 2001. At the time – and I document this carefully in the book – there was a lot of talk about “the end of irony” and the confident prediction that 9/11 would lead to a return to patriotism in American film and TV (much as had happened during World War II). There were some immediate changes in TV programming as a result of 9/11, but almost no lasting effects.

I show that “The X-Files,” which was supposed to represent the kind of anti-government programming that 9/11 had made unacceptable, actually became the model for a whole series of shows throughout the first decade of the 21st century, shows like “Invasion,” “The Event,” “V” and “Fringe.” I analyze how all these shows reflect the geopolitical anxieties of the 21st century, especially those generated by globalization, terrorism and the surveillance state.

Q: What are you teaching at Harvard this semester? Will you be back at U.Va. teaching in the spring, and if so, what courses?

Cantor: I’m teaching a course on “Shakespeare and Politics” in the Harvard government department this semester. I’m analyzing the way the different political settings in Shakespeare’s plays are key to his portrayal of the wide range of human possibilities.

In the spring at U.Va., I’ll be teaching a course I’ve taught for many years, “The Fiction of Empire,” which deals with the literature of the British Empire in the late 19th and early 20th centuries – authors such as Rider Haggard, Rudyard Kipling and Joseph Conrad. Much of this literature was the popular culture of its day, and I show how it came to terms with distinctively modern problems, such as globalization.

I’m currently heading the Comparative Literature program at U.Va. and so will be teaching its senior seminar. I’m offering a course on the theory and practice of tragedy. I’ll begin with the great theorists of tragedy – Aristotle, Hegel and Nietzsche – and with Ancient Greek tragedy, but as an experiment I’m going to end with some tragic filmmakers – John Ford, Akira Kurosawa and Francis Ford Coppola. As it happens, I have a chapter on Ford and Aeschylus in my new book. So everything is coming full circle.