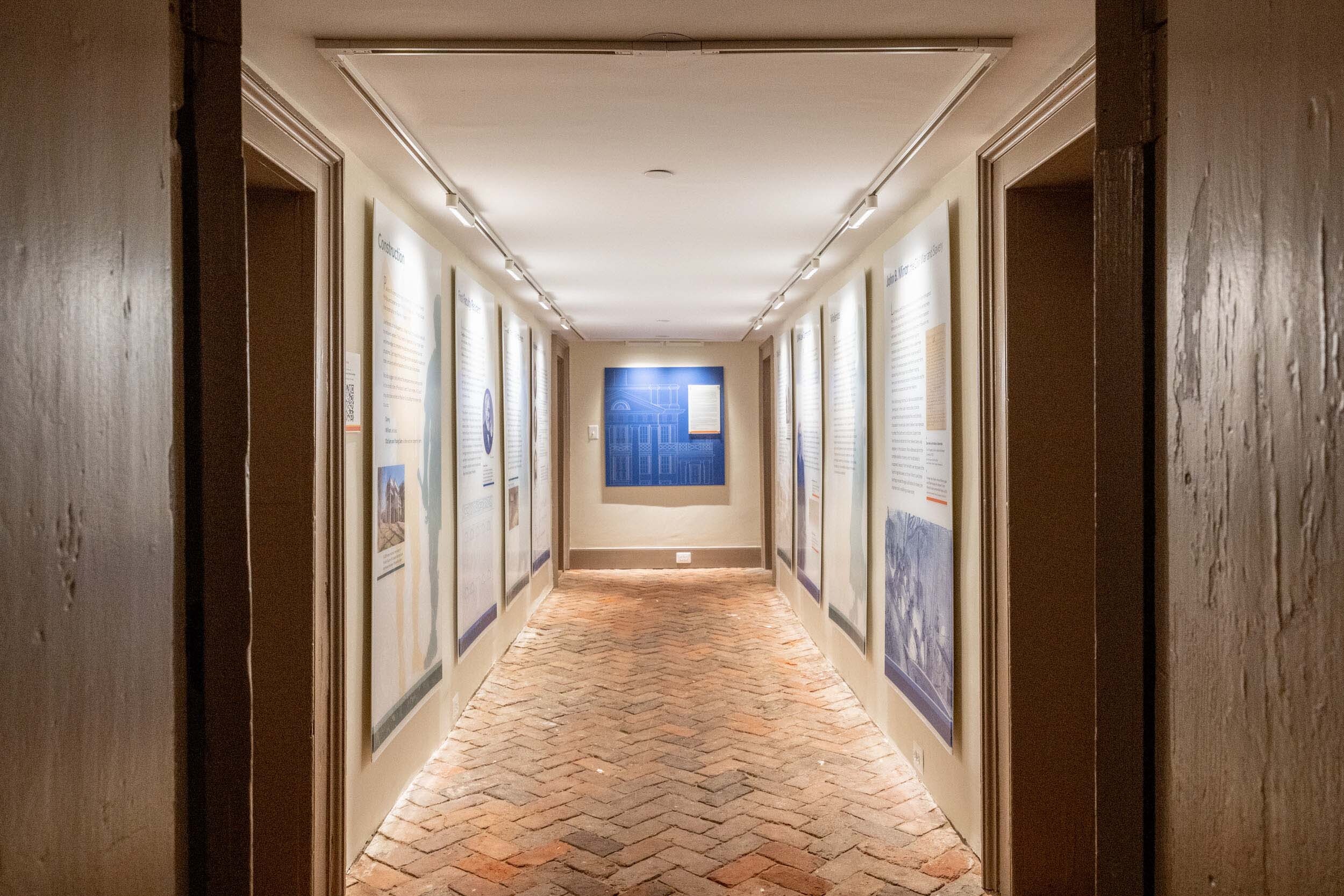 The exhibit consists of nine panels of text and imagery about slavery history of Pavilion X. (Photo by Sanjay Suchak, University Communications)

The names of many of the first University of Virginia professors are well-known – medical professor Robley Dunglison and law professor John B. Minor, both of whom lived in Pavilion X, for example. But what about Frances “Fanny” Gillette Hern and the father-and-son carpenters, “Old Sam” and “Young Sam”?

Many people who lived in or near the Academical Village in its early days cooked, built, gardened and did more for faculty members and their families – and were counted as property.

Now, Ian Solomon, dean of UVA’s Frank Batten School of Leadership and Public Policy, who currently lives in Pavilion X with his family, is encouraging visitors and viewers to see a new exhibit installed in the cellar’s hallway that brings to light some of the former residents and conditions of daily life of the enslaved workers, as well as the white professors for whom they labored without freedom. Although the exhibit is not yet open to the public, the panels of the exhibit can be viewed online. 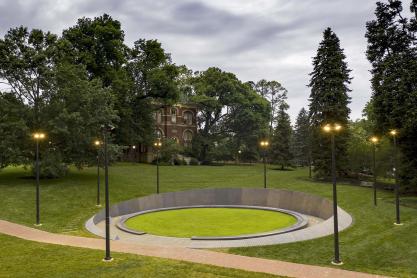 ‘To Them We Owe Our Deepest Gratitude’: UVA Dedicates Memorial to Enslaved Laborers 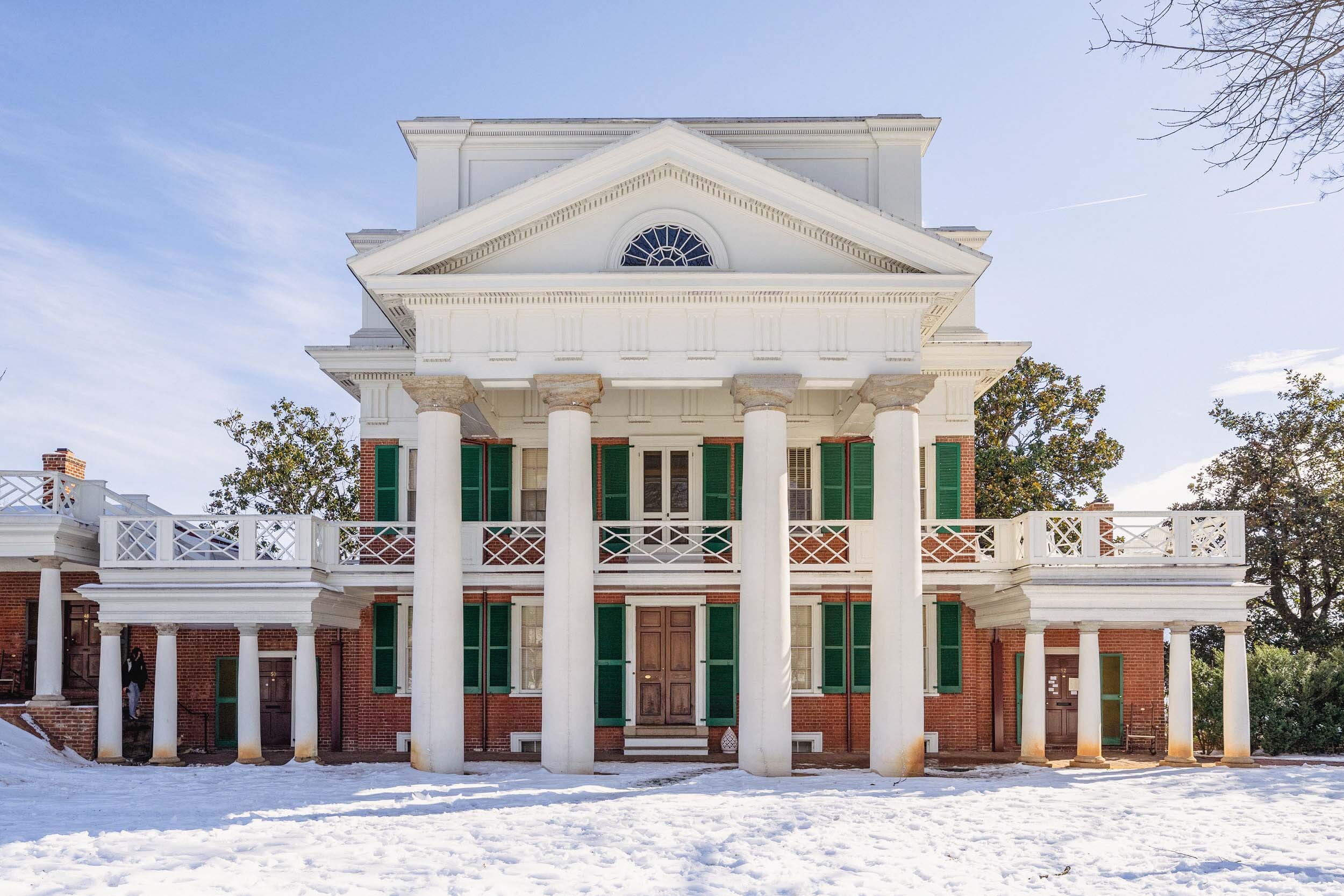 Living in a place like Pavilion X as an occupant gives Solomon and his family the opportunity to understand who came before them, he said. (Photo by Sanjay Suchak, University Communications)

Living in a place like Pavilion X as an occupant gives Solomon and his family the opportunity to understand who came before them, said Solomon, who moved to the Lawn with his wife and two teen-aged sons in 2020, a year after coming to the Grounds to lead the Batten School. When he hosts Batten School meetings or gatherings, he plans to invite colleagues, students and other visitors to see the exhibit, he said.

Although the architecture of UVA’s Academical Village is renowned, being the only U.S. university listed as a UNESCO World Heritage Site, it’s the people from the past who capture Solomon’s interest.

“My interest is in the human side – who were they, the people who lived here and constructed these buildings? Who were the mothers and fathers?” he said recently. “I’m interested in the lives embedded in this place and the stories of people, how they interacted.”

Looking for a way “to engage with that history,” Solomon commissioned a research and design team, convened by architectural historian Louis Nelson, UVA’s vice provost for academic outreach, to create the educational exhibit. It consists of eight panels of text and imagery, each almost 3 feet by 6.5 feet, hung along the walls, with a slightly smaller panel at the end of the hall that displays the dean’s welcome message.

In that message, Solomon explains, “This exhibit is but a small token of my gratitude for the opportunity to give voice to the ghosts of yesterday, to provide context for many of the challenges of today, and to help shape our community’s better tomorrows.”

It’s powerful, Solomon, who is Black, pointed out, that he and his family, with a diverse blend of ethnicities and religions described in his message, now live in a space that was not meant for people like them. He also wants his teen-aged sons to understand this history.

In recent years, UVA has been supporting institutional projects that entail combing the archives and seeking other sources to find out more about the enslaved people who lived in and around the Academical Village, building and maintaining the new university.

Solomon joined these efforts, hosting an open house Friday afternoon, “Uncovering History: A New Exhibit Exploring the Untold Stories of Pavilion X.” More than 50 people registered to view the exhibit and hear Nelson and him discuss the project. 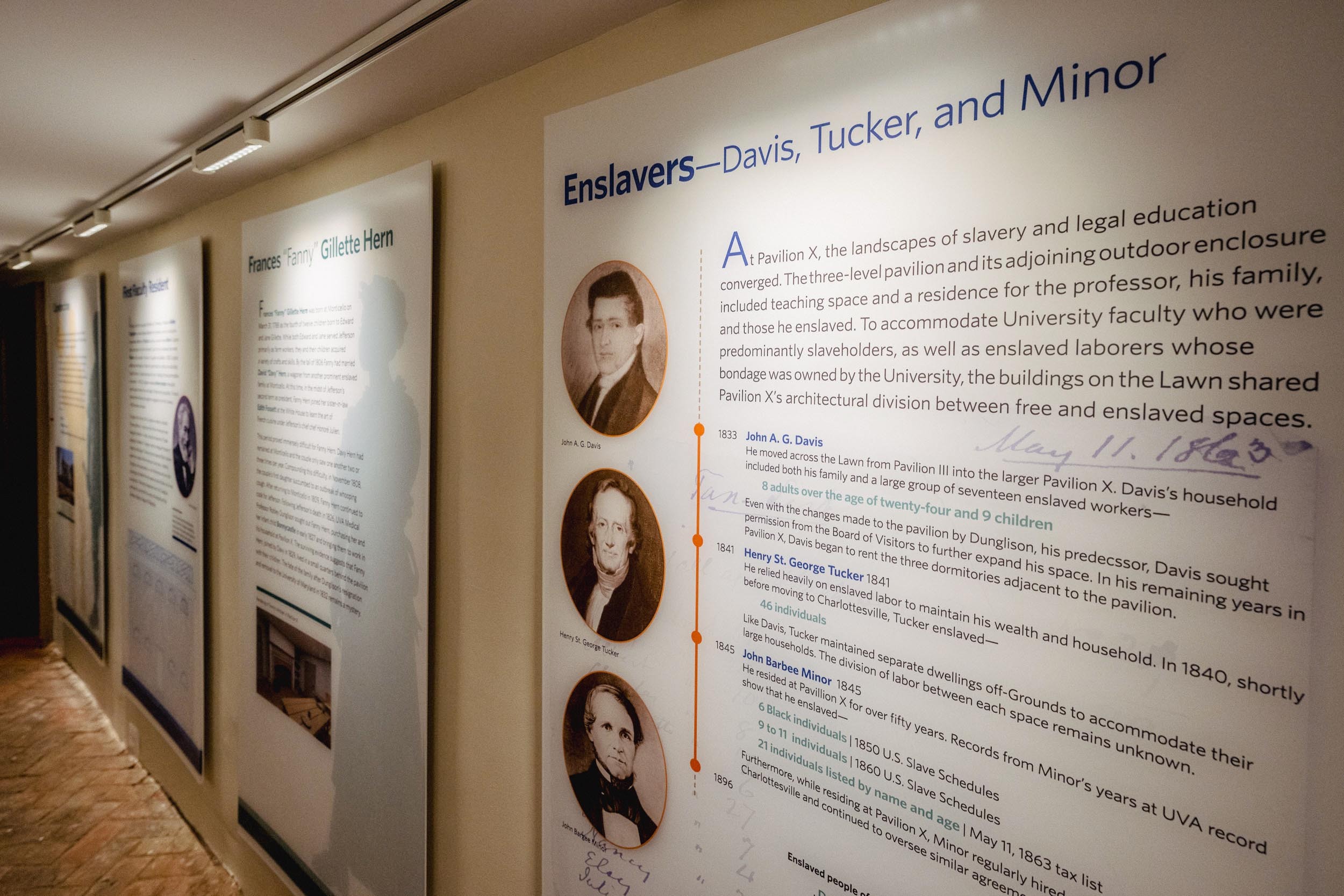 The professors who occupied Pavilion X, some of whom owned enslaved workers, disseminated ideas about racial superiority and inferiority. (Photo by Sanjay Suchak, University Communications)

Speaking a few days before the open house, Solomon said, “We need to have the courage to acknowledge the truth about slavery in UVA’s history and how it might have affected the people whose history has been ignored or forgotten or erased. We need to have the courage to tell the truth, to engage with evidence and facts, to have honest reflection about real life. We want our students to be able to do this, too.”

Old Sam and Young Sam were among enslaved carpenters who records show worked on building several other pavilions.

More information has been retrieved about Frances “Fanny” Gillette Hern. Another panel tells that she was born in bondage at Monticello and cooked for Thomas Jefferson, including at the White House when he was president. At that time, she had to leave behind her husband Davy, a wagoner at Monticello. After Jefferson’s death, Dunglison, the University’s first medical professor, purchased Fanny Hern to cook at Pavilion X. Evidence suggests she and Davy and their children lived behind the pavilion, but what happened to them when Dunglison left UVA in 1832 for University of Maryland is still unknown.

The names of the Hern family were added to the University’s Memorial to Enslaved Laborers about a year ago.

After Dunglison, four professors – all in law – occupied Pavilion X consecutively for more than 100 years, from 1833 to 1936, the first three of whom were enslavers: John A.G. Davis, Henry St. George Tucker and John B. Minor. (The fourth was William Minor Lile). 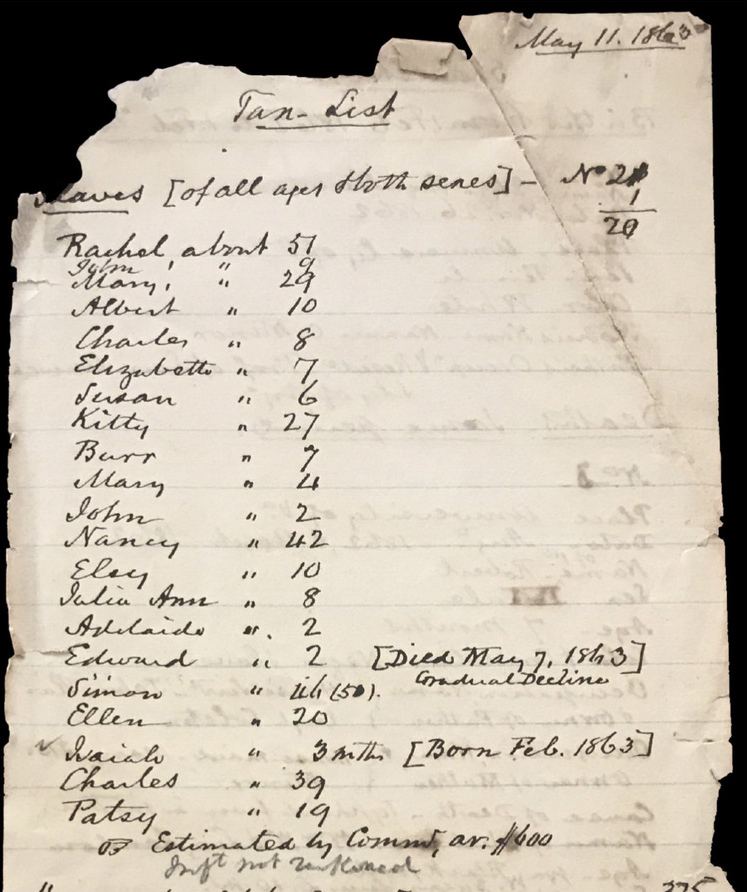 Minor moved into Pavilion X in 1845 and lived there for 50 years. His 1863 tax records contained a list of 21 individuals considered property, about half of them children.

As a panel points out, all four of the law professors spread discredited ideas about racial hierarchy and tried to justify slavery in their teaching.

Much of the panels’ content was newly developed for this exhibition, Nelson wrote in an email. Minor’s tax records, for example, came from archival material in the Minor and Wilson Family Papers in the Albert and Shirley Small Special Collections.

History professor Kirt von Daacke, who co-chaired the President’s Commission on Slavery and the University, led a research team with history doctoral students Ian Iverson, who wrote and edited the content for the panels, and Joshua Morrison, who finished his Ph.D. and is now a post-doctoral fellow at Columbia University, where he works on that institution’s slavery project.

Meggan Cashwell, Randi Flaherty and Addison Patrick, of the UVA Law Library Special Collections team, partnered with Iverson to research and draft the exhibit text. Worthy Martin and Lauren Massari of UVA’s Institute for Advanced Technology in the Humanities formatted the Pavilion X exhibit and artist Anne Chestnut designed it.

Nelson said the team reviewed the entire exhibition with the Descendants of Enslaved Communities at UVA before production. “They reviewed it and offered some good feedback that we incorporated before completion. This review included also descendants of the individuals named in the exhibition.”

Solomon said, “This is part of educating people. My hope is that they grapple with this history, and we jointly figure out what it means for us as a public university.”

Or, as he wrote on the exhibit panel: “I hope you will see history as an unfolding process of discovery and understanding in which each of us plays a part. Their stories – our shared stories – are still being written as we work to cure our defects and fulfill America’s founding promise of freedom and equality.” 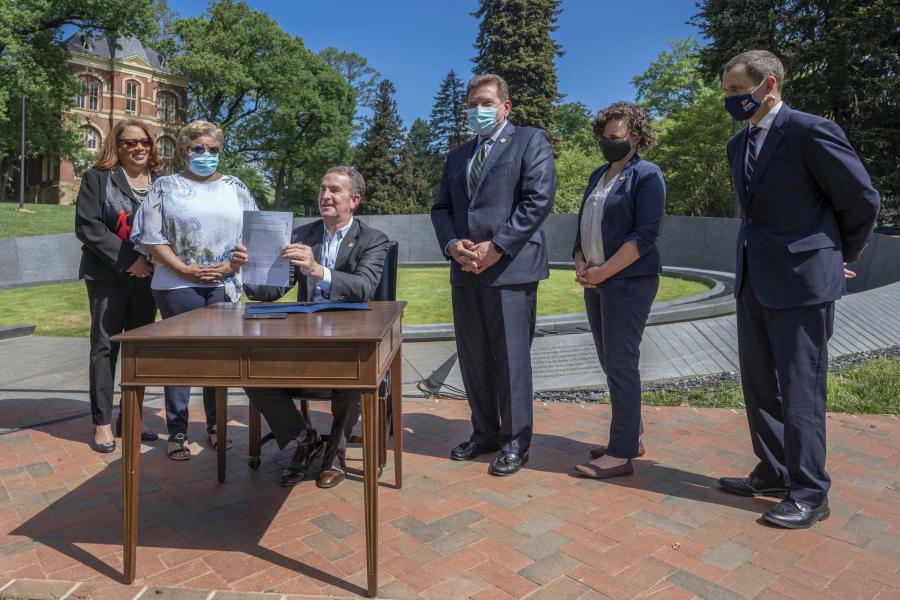 New Law, Signed at UVA, Focuses on Reparations for Descendants of Enslaved Workers 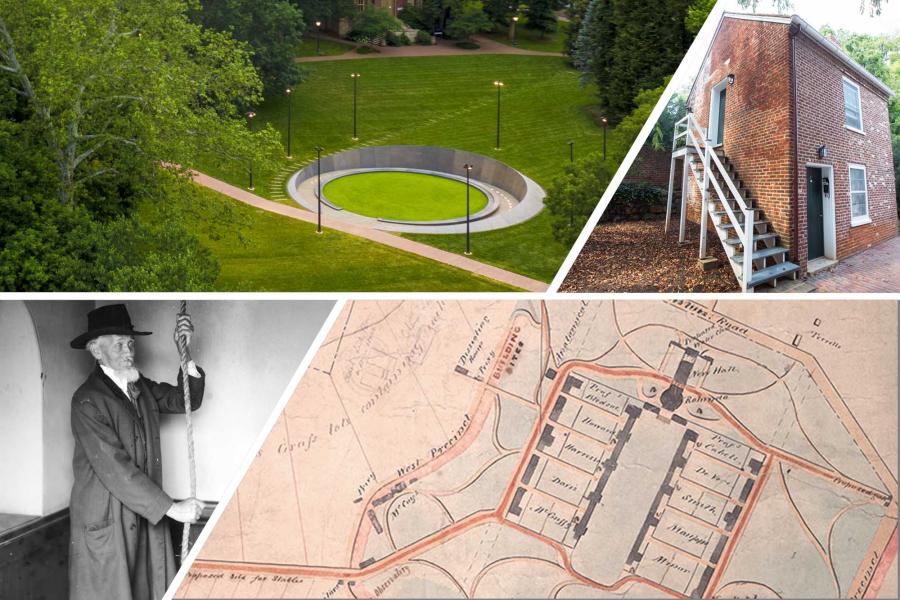 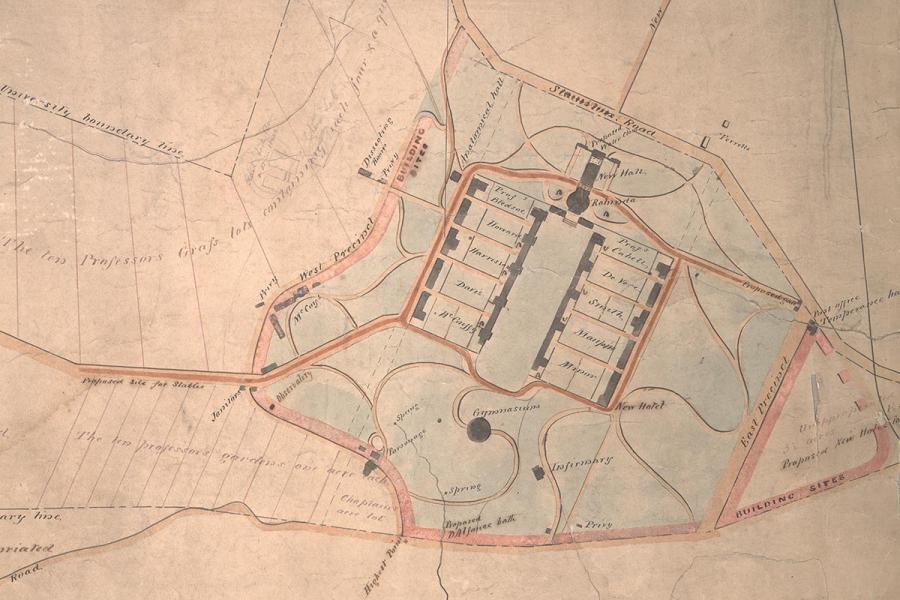