Peyton Manning Connects with Class of 2014 at Valedictory Exercises 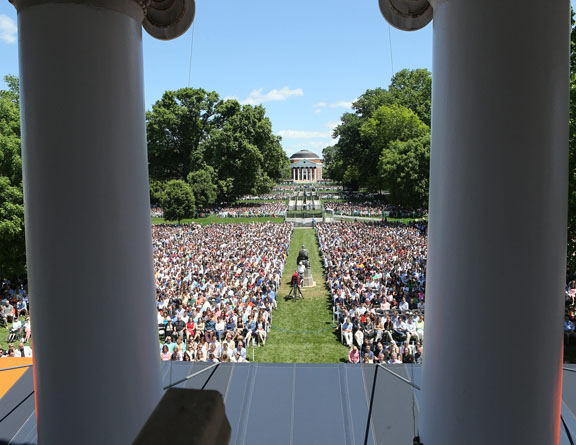 Back in October, when friends of University of Virginia fourth-year student Amanda Swanson relayed the news that Peyton Manning was to be the keynote speaker at her class Valedictory Exercises, she was sure they were pranking her.

After all, Swanson grew up in Knoxville, Tennessee, where Manning is revered for quarterbacking the University of Tennessee football team to the 1997 Southeastern Conference championship, setting 33 school records in the process. She has followed her idol’s record-setting NFL career with all the fervor of a smitten schoolgirl – which she, in fact, was.

“I’ve been a Peyton fan since the beginning of time,” she said Saturday as she stood in the doorway of her room on the East Lawn, which was festooned with five Manning jerseys in the colors of Tennessee; the Indianapolis Colts, where Manning started his Hall-of-Fame career; and the Denver Broncos, his current team. She hoped the display would catch his eye.

Down on the lower Lawn, Takhir Sakhatov, too, was hoping to attract Manning’s attention. A Denver native, he graduated a year ago from the College of Arts & Sciences, but made the trip from Northern Virginia with his family. He wore a Bronco jersey, as did his 3-year-old twin sons, Rahim and Elijah. His 3-month-old daughter – named Peyton – wore a Bronco T-shirt with the slogan, “Football first – nap later.”

“I want to see if this guy can upstage Colbert,” Takhir Sakhatov said, referring to comedian Stephen Colbert, the 2013 valediction speaker.

Swanson and the Sakhatovs were among a huge crowd that packed the Lawn on a picture-perfect day to hear from Manning, witness the bestowing of various awards (read more here) and the class gift, and listen to student speakers.

But mostly to hear from Manning.

He did not disappoint. Mixing in humor, wise advice and three touchdown passes to audience members, Manning’s 20-minute speech drew frequent laughter and intermittent applause throughout and a standing ovation at its conclusion.

He opened by sharing his experiences in Charlottesville while dating his then-girlfriend, now wife, Ashley, who graduated from the McIntire School of Commerce in 1997. He listed a string of places where they hung out together during his visits – Littlejohn’s (where his favorite order was the Sampson sub, named after arguably U.Va.’s most famous athlete), Coupe de Ville’s, Bodos, the Biltmore Grill, Bel Air Market and Memorial Gymnasium.

“One regret was I never got to throw any football passes here on the Lawn,” he said. “So if you will indulge me, I am going to fulfill that dream right now.”

He called up three graduating students to a spot several yards downfield from the podium and pulled out three autographed footballs, one by one. “If you’re nervous, I understand,” he quipped. “Seriously, there is no pressure here at all. If you drop it, it will not be on YouTube, I promise you.”

Of course, all three passes – lobbed easily – were completions.

Further ingratiating himself to his U.Va. audience, he dusted off a 1906 quote from Edwin A. Alderman, the University’s first president, discussing the character traits that football encourages. A boy, he quoted Alderman as saying, “can’t successfully play football without self-denial, self-restraint, resoluteness, patience, loyalty to a cause and a distinct form of unselfishness.”

“I would add a big offensive line and fast receivers,” Manning quipped.

Turning serious, he acknowledged the soon-to-be graduates’ anxiety over what comes after Sunday’s Final Exercises. He asked them to envision themselves at the edge of the San Andreas Fault; while some will fearfully cling to their turf, he urged them to bravely make the leap to the next phase of their lives.

“I promise you that the exhilaration of what’s on the other side will far outweigh the risk,” he said.

Later, he added, “Some people, who never made that leap across the fault themselves, will tell you that today is the divide between childhood and adulthood, between fantasy and the real world. They’ll tell that that it is time to get serious, because the real world is a cruel place, one in which you need to play by adult rules.

“Well I disagree. If the real world isn’t kind to newcomers, then it’s because the people in it have chosen to be unkind. You and your future co-workers have the ability to change that.”

Noting the upcoming generation’s idealism and record of pubic service, Manning urged them to assert their values.

Manning’s speech was well-received – at least by one longtime fan. Swanson, the Lawn resident from Knoxville, said, “I think he was great. I thought it was really good.”

Alas, Manning had not spied her jersey display. “I tried to set the trap, but he didn’t come by,” she lamented.

Earlier in the event, Class of 2014 Trustee Amy Rodgers welcomed the audience by acknowledging she was “terrified” of what is to come. Drawing on the football theme, she said, “All of our lives we’ve been following a structure, this kind of playbook, if you will, that has outlined our next move in the academic game, middle school to high school to college. Now what? Where do we go from here? We’re flipping through this playbook and realizing there is no clear-cut diagram, no X’s and O’s anymore.”

But, she said, their experiences at U.Va. have prepared them well for this moment. “We’ve become professionals at rising to a challenge. That’s been our U.Va. experience. To talk about our class’s experience, you can’t talk about a ready-made book of plays that we are all following together. You have to talk about 3,500 real-time audible decisions that have gotten us right where we are and will continue to get us where we’re going.”

Class President Brandon Moores sounded similar themes in his closing remarks, a riff on a question that many fourth-year students have been hearing for months. “So are you ready to graduate?”

He concluded that though they may not be happy to leave, “Yes, we are ready to graduate. Our collective University of Virginia experience has ensured this. Our experiences with resiliency, leadership, honor and knowledge have equipped us with the tools to be confident as we move into the unknown.

“As we walk down the Lawn tomorrow, we can throw our worries to the side. It will be OK to say farewell to this place, because Virginia has prepared us for our lives ahead.”

In presenting U.Va. President Teresa A. Sullivan with the Class of 2014’s parting gift, the class trustees announced that 81 percent of graduating students contributed, smashing the record set last year, when 68 percent of the Class of 2013 participated.

In all, $168,686 will be distributed to more than 400 programs across the University, as designated by the student donors.

“You have hit it out of the ballpark!” Sullivan exclaimed in accepting the gift. She noted that 18 percent of the students designated their gift to benefit the AccessUVA financial aid program, which will receive more than $12,000.

What Is the ‘4th Side’? END_OF_DOCUMENT_TOKEN_TO_BE_REPLACED