Peyton Manning to Give Valedictory Address During U.Va.’s Finals Weekend 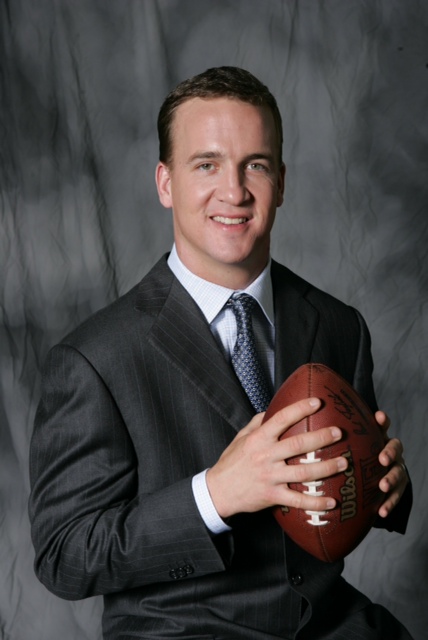 Peyton Manning has led his team to a Super Bowl championship, has been named the National Football League’s Most Valuable Player a record four times, is sure to be selected to the Pro Football Hall of Fame and has hosted “Saturday Night Live.”

On May 17, however, he’ll add something unique to his list of accomplishments: He will be the featured speaker at the University of Virginia’s 2014 Valedictory Exercises. The ceremony will begin at 11 a.m. on the Lawn.

Part of the Finals Weekend festivities, Valedictory Exercises is the ceremony at which the Class of 2014 will celebrate its time at the University and present the class gift and University awards.

Fourth-year student Sarah Salinas, who chairs the Class of 2014’s Graduation Committee, said the committee invited Manning to speak because “his sports career and off-the-field commitments are consistent examples of leadership, excellence and generosity.”

Manning founded the PeyBack Foundation in 1999 “to promote the future success of disadvantaged youth by assisting programs that provide leadership and growth opportunities for children at risk.” The foundation has donated more than $6.5 million through its grants and programs to youth-based community organizations in Colorado (where he plays for the Denver Broncos), Indiana (where he began his NFL career with the Indianapolis Colts), Tennessee (where he starred at the University of Tennessee) and Louisiana (his home state).

Additionally, Manning maintains a strong relationship with the former St. Vincent’s Children’s Hospital in Indianapolis, which in 2007 was renamed the “Peyton Manning Children’s Hospital at St. Vincent.” He started the Peyton Manning Scholarship program at the University of Tennessee that has honored 20 incoming students in the past 16 years for their academic achievement, leadership and community service. He is a member of the Board of Visitors for the University of Tennessee’s College of Arts and Sciences, the National Football Foundation Scholarship Athlete Advisory Board and the American Red Cross National Celebrity Cabinet.

“I think as fourth-year students preparing for graduation, we can look back and see explicit examples of sacrifices made for us throughout our educational careers,” Salinas said. “We can recognize the impact of the Mannings’ work with these younger generations of students who will one day be in our shoes. Valedictory Exercises is both a time to reflect on the student experience as well as a time to prepare to go forward and do good.”

“The Fourth-Year Trustees are more than excited to welcome the Mannings to Grounds. We hope that Mr. Manning will not only share lessons gleaned from an impressive career, but also encourage our class to live, as he has, with an external focus.”

Manning has been in the public spotlight since he was a standout at Isidore Newman High School in his native New Orleans. The son of longtime NFL quarterback Archie Manning, he was one of the most highly recruited players in the country before opting to attend the University of Tennessee. There he epitomized the term “student-athlete”; in addition to being a four-year starter at quarterback, setting 33 school records, eight Southeastern Conference marks and two NCAA standards, and leading the Volunteers to a 39-6 record and the 1997 SEC championship, Manning graduated with honors.

He was the top overall selection in the 1998 NFL Draft by the Indianapolis Colts and was a starter from his first game, embarking on a record-setting pro career. Four games into the current season, he ranks second all-time in passing touchdowns (452), completions (5,199) and wins (158) and third in passing attempts (7,949) and passing yards (60,957 – nearly 35 miles). He has been named the league’s Most Valuable Player a record four times and has been selected to the Pro Bowl for 12 of his 16 NFL seasons.

After missing the entire 2011 season with a neck injury that many speculated might end his career, the Colts released Manning. He signed with the Denver Broncos and in 2012 was named the league’s Comeback Player of the Year. He set franchise season records in nearly every passing category and finished as runner-up in the league MVP voting.

This season, the Broncos are among the favorites to reach the Super Bowl. Manning opened the season by tying an NFL record by throwing seven touchdown passes in Denver’s 49-27 victory over the defending Super Bowl champion Baltimore Ravens.

Though he has a reputation for being exacting on the football field, he has also shown a lighter side. He hosted a well-received episode of “Saturday Night Live” in March 2007, and is a master pitchman in humorous television advertisements, often appearing alongside his younger brother, Eli, the star quarterback of the NFL’s New York Giants.

Manning and his wife, Ashley, a 1997 graduate of U.Va.’s McIntire School of Commerce, have 2-year-old twins, Marshall, a son, and Mosley, a daughter.

Meet the New Cavalier on Horseback: She’s Eager To ‘Carry On a Legacy’ END_OF_DOCUMENT_TOKEN_TO_BE_REPLACED

Housing Changes Are a Breath of Fresh, Cool Air – Especially for Lawnies END_OF_DOCUMENT_TOKEN_TO_BE_REPLACED

Virginia Football – For All Virginia END_OF_DOCUMENT_TOKEN_TO_BE_REPLACED