From Pine to Mahogany: Practitioner of Rare Art of ‘Graining’ Restores Pavilions’ Doors 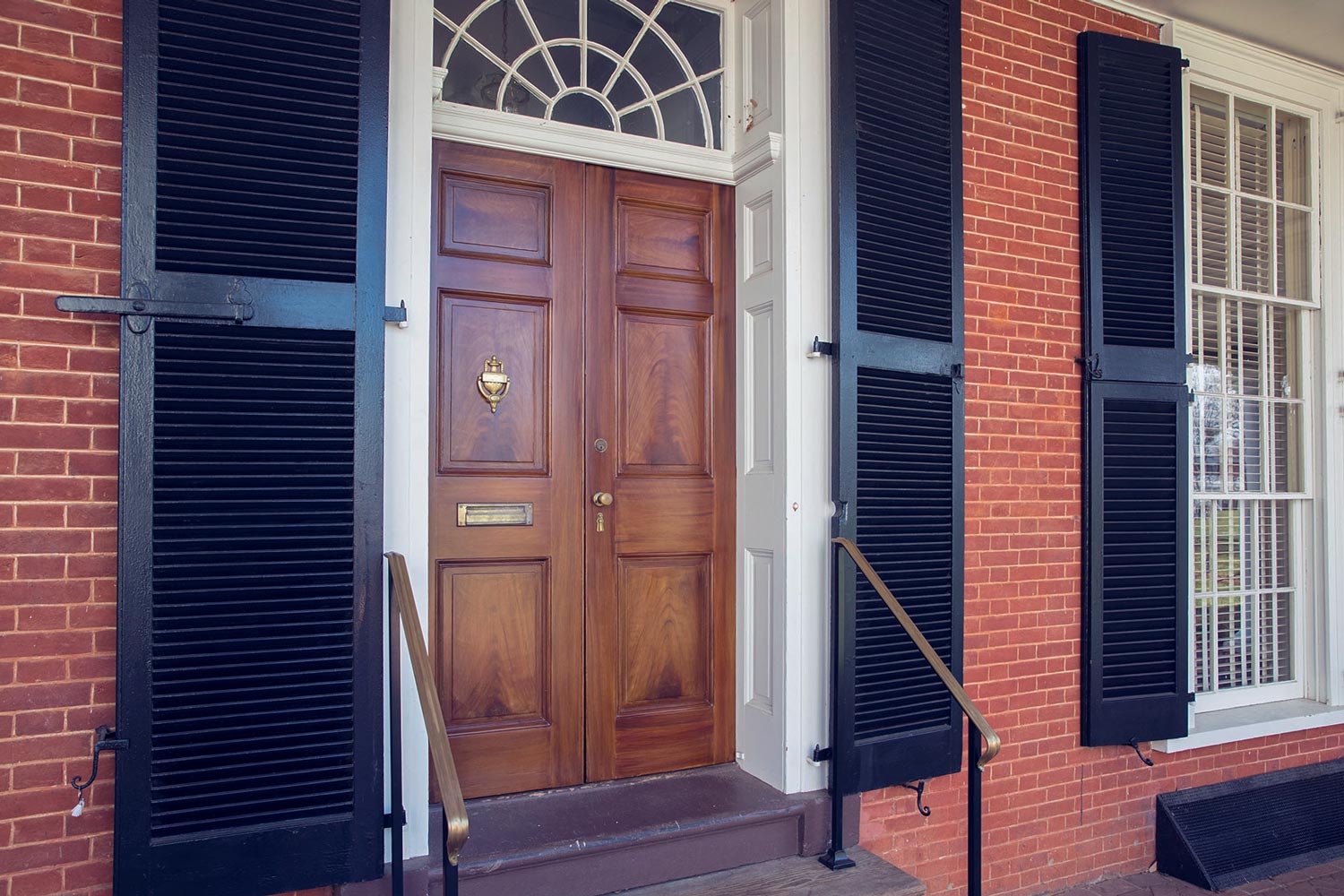 Thomas Jefferson’s pavilions in the University of Virginia’s Academical Village are works of art – right down to the front doors.

Recently, some of those works of art were restored.

The doors of Pavilions II, III and X were “re-grained,” or treated in a traditional decorative technique for making ordinary wood appear to be more rare and expensive. In the case of the pavilions, pine doors were “grained” to make them look as if they were mahogany.

“It’s a technique to make it look like a more attractive species,” said Dave Riccio, a principal at John Canning Associates of Cheshire, Connecticut. “The mahogany is a masculine wood, while pine is a light wood.”

UVA preservationist Mark Kutney said the graining on the pavilion doors was in poor shape, particularly the ones on the east side of Lawn, which get less sunshine and on which mildew was starting to cause the varnish to turn cloudy.

“They looked terrible close up,” Kutney said. “We wanted them to look their best for the bicentennial.”

The University brought in Riccio’s firm to work on the doors. Canning Associates has already done work on the recently renovated Rotunda and in restoring the central ceiling in Garrett Hall.

The pavilion doors are the original six-panel, Jeffersonian doors. The graining technique, which uses subtle paint lines to create the impression of a wood grain, was maintained for years on the pavilion doors, with about three to four re-grainings after the original.

The technique fell out of fashion, or became too much to maintain, and the pavilion doors were simply painted. This manner of maintaining the portals continued until the 1980s, when the late Murray Howard, then the University’s architect for the historic buildings and grounds at the University, re-instituted the practice of graining the pavilion exterior doors.

Kutney said over the years, the pavilion doors sustained between 30 and 40 layers of paint. He said when Howard started graining the doors again, he had the paint layers removed and brought the doors back down to the original grained layers, building new layers of graining from there. 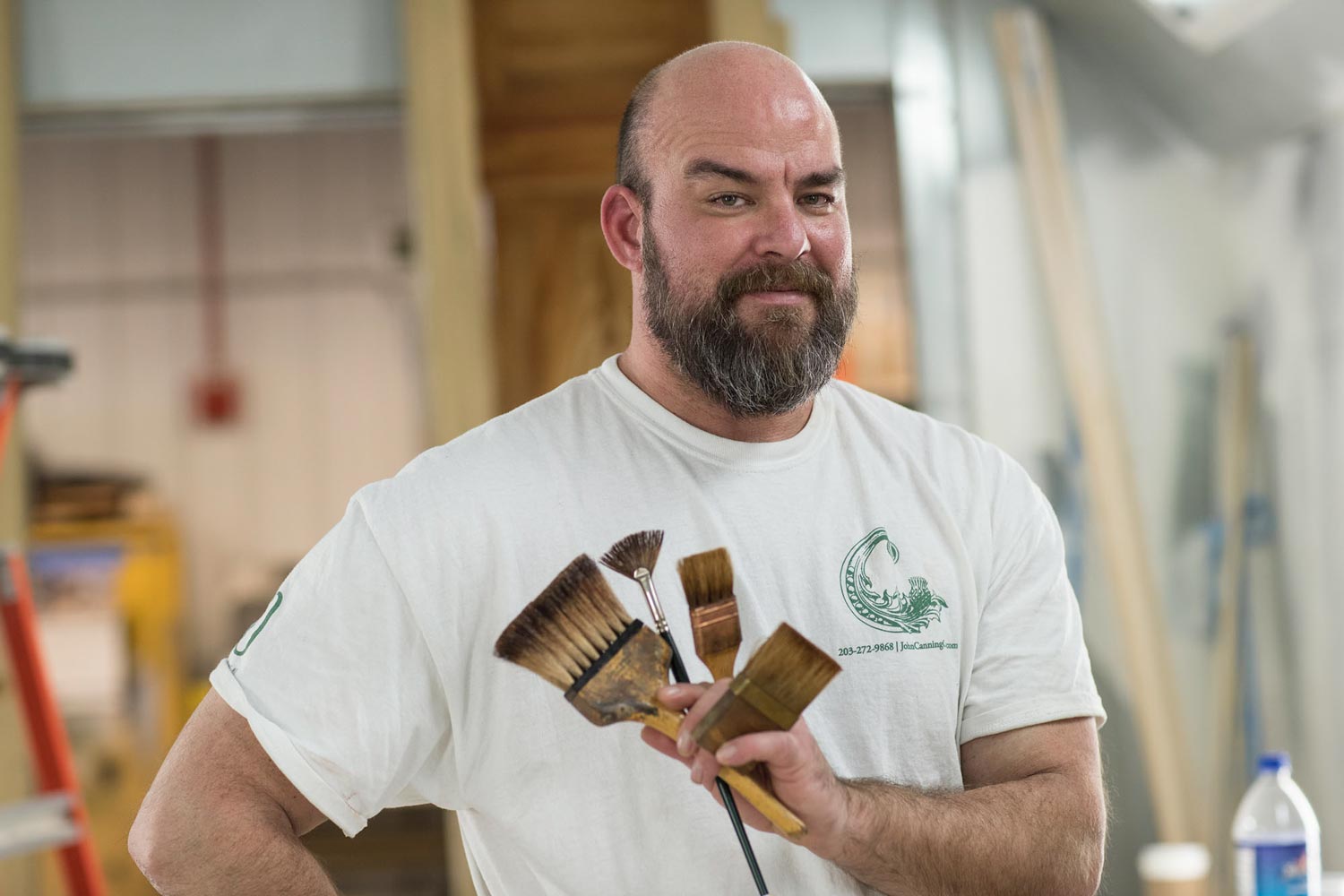 Craftsman Starr Hardridge, an Oklahoma artist who has been with Canning Associates for about six years, worked on the doors in Facilities Management’s paint shop.

Graining is a multi-step process. Once the varnish is stripped off and the wood is primed, a base color is put down and then the door is “flogged” with a mixture of pigment and ale. “The pigment needs to adhere to the door, and once the beer evaporates, the proteins in the beer will act as a binder to hold the paint,” Riccio said.

Hardridge said that any ale could be used, though if he were using dark pigments he would use Guinness. The woodgrain patterns are drawn with a variety of brushes with different lengths, textures and thicknesses. A brush, such as a flogging brush with its long, slender bristles, is gently whipped across the pigment to create the grain lines. 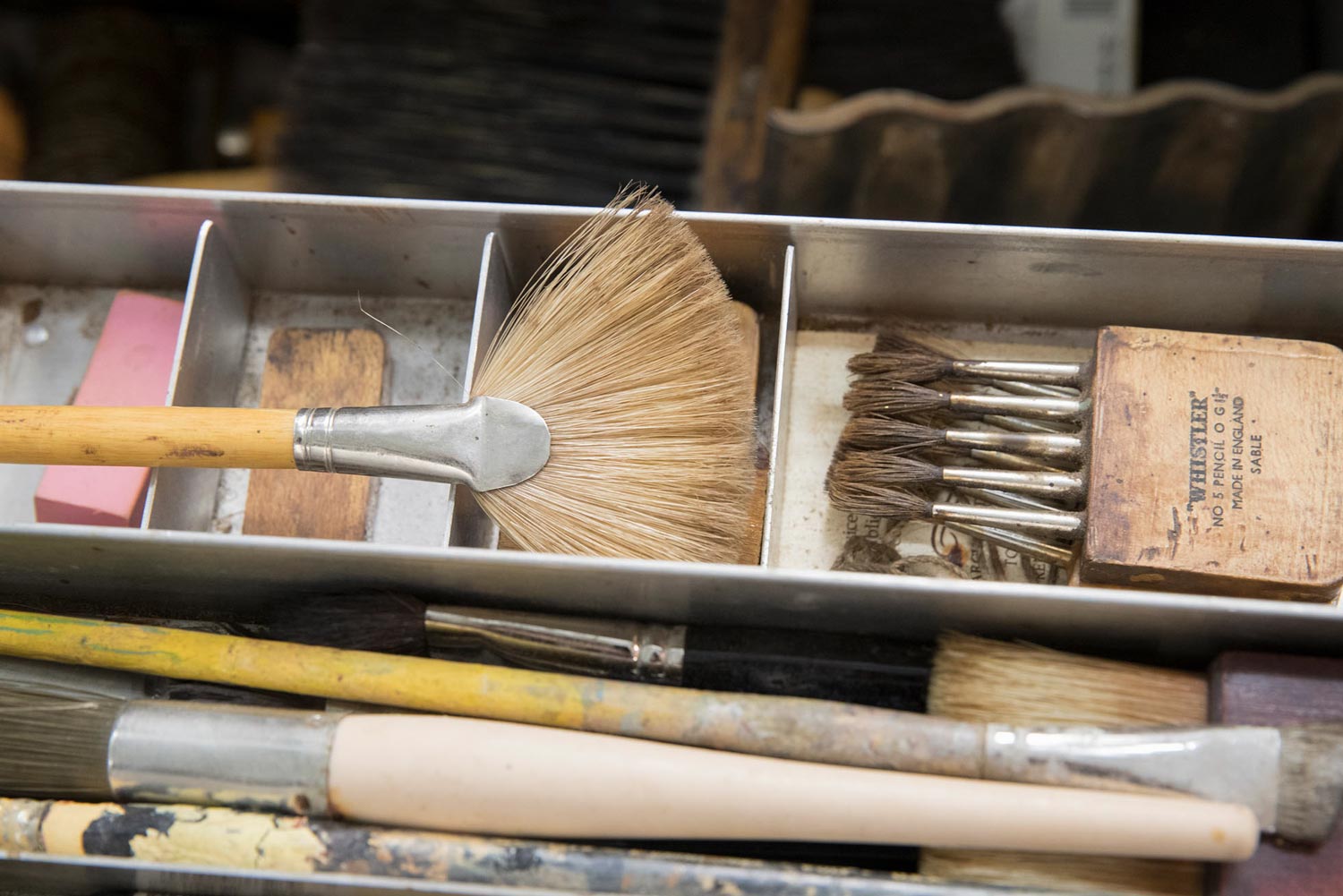 Hardridge used a combination of mineral spirits, linseed oil and Japan drier, stirred together in a plastic container. He dipped his brush into the mixture, then spread the brush into his paints on the lid of a paint can, which he then uses as his palette. He relies on a variety of brushes – four in particular from the roughly 50 he brought with him – caressing the wood panels and gently spreading the faint grain lines.

“This is very deliberate for a certain character of the line,” Hardridge said. “It needs to have depth. The things under each layer create character.”

An artist all his life, Hardridge has been a muralist, a house painter and has run a decorating business. He learned his graining techniques from decorative painting master Michel Nadai, with whom he studied in the medieval village of Penne-d’Agenais in the southwest of France.

“The European style is more sophisticated,” he said. “It has been built on principles that have not changed.”

As Hardridge perfected his decorative painting techniques, he realized the importance of preserving the work of craftsmen from previous eras, which is what drew him to Canning in 2012. 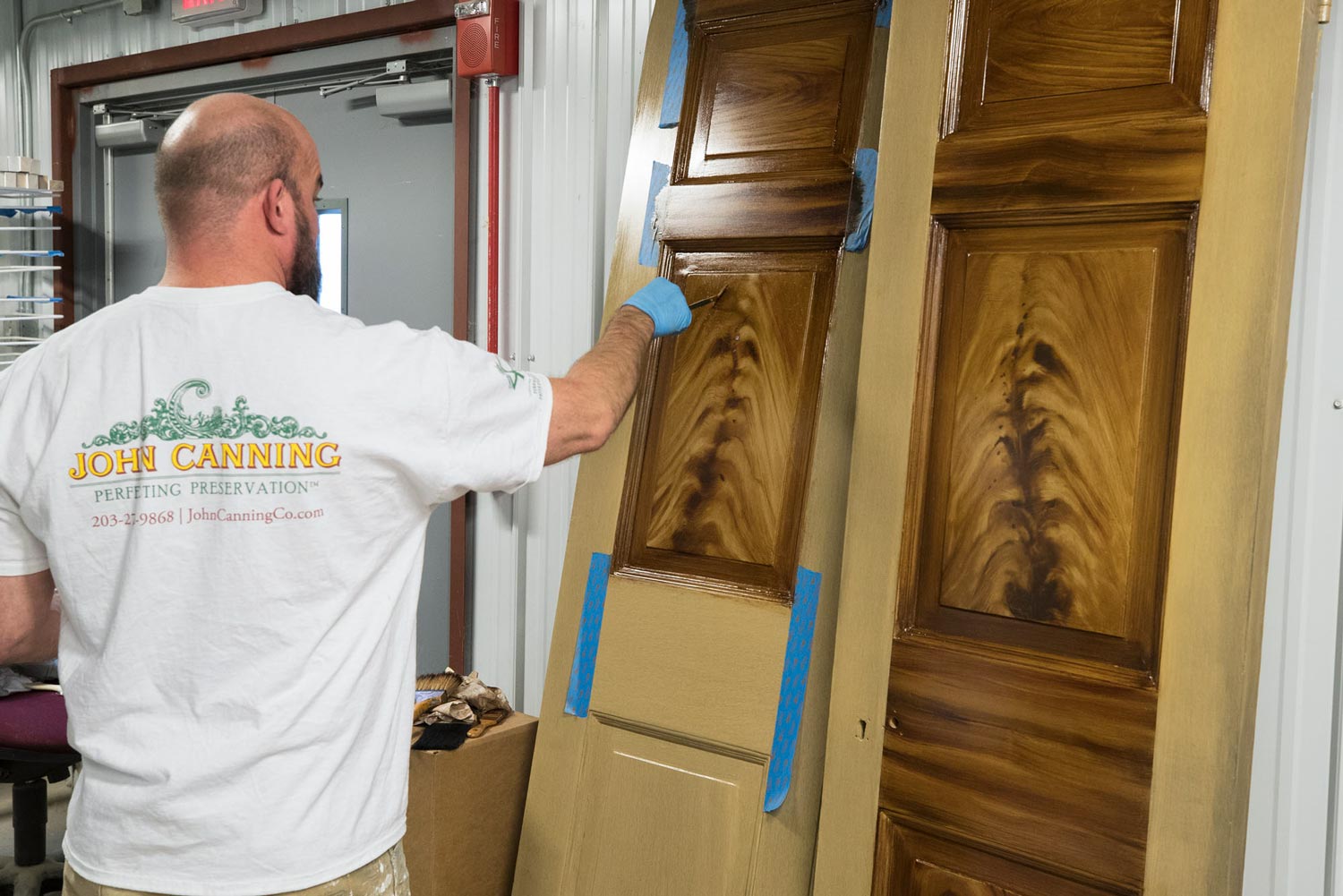 “This is random with principle,” Hardridge said as he flicked a one-eighth inch wide brush across spots on the door panel. “It is intended to be a bit random, and you can’t overthink it. If you made the same patterns, then it would appear contrived. Nature never repeats itself.”

As he worked, there was a soft stuttering of a spalling brush – flexible bristles affixed to a small block of wood, essentially a paintbrush with the handle removed – which he tucked between his thumb and the first two fingers of his hand.

“The more historical colors are darker,” he said. “They used a lot of earthen tones in the 1850s. I am trying to bridge the modern and the historic.”

While Hardridge worked, he listened to Jimmy Page and the Black Crowes playing covers of Led Zeppelin songs on his mobile phone, an artist pursuing an ancient art form to the sound of modern music on modern technology. Several Facilities Management painters studied Hardridge’s techniques while he worked, so they will be able to maintain the doors over the years as they need touch-ups.

Kutney said the plan is to restore the graining on all the pavilion doors, “but we’ll let the current graining wear out before we do.”

It’s Copperhead Season in Virginia. Here Is What You Need to Know END_OF_DOCUMENT_TOKEN_TO_BE_REPLACED

What’s Next for UVA’s Class of 2022? END_OF_DOCUMENT_TOKEN_TO_BE_REPLACED