A Platform to Reach Politicians Directly, Without All That Toxicity? This Duo Has an Idea. 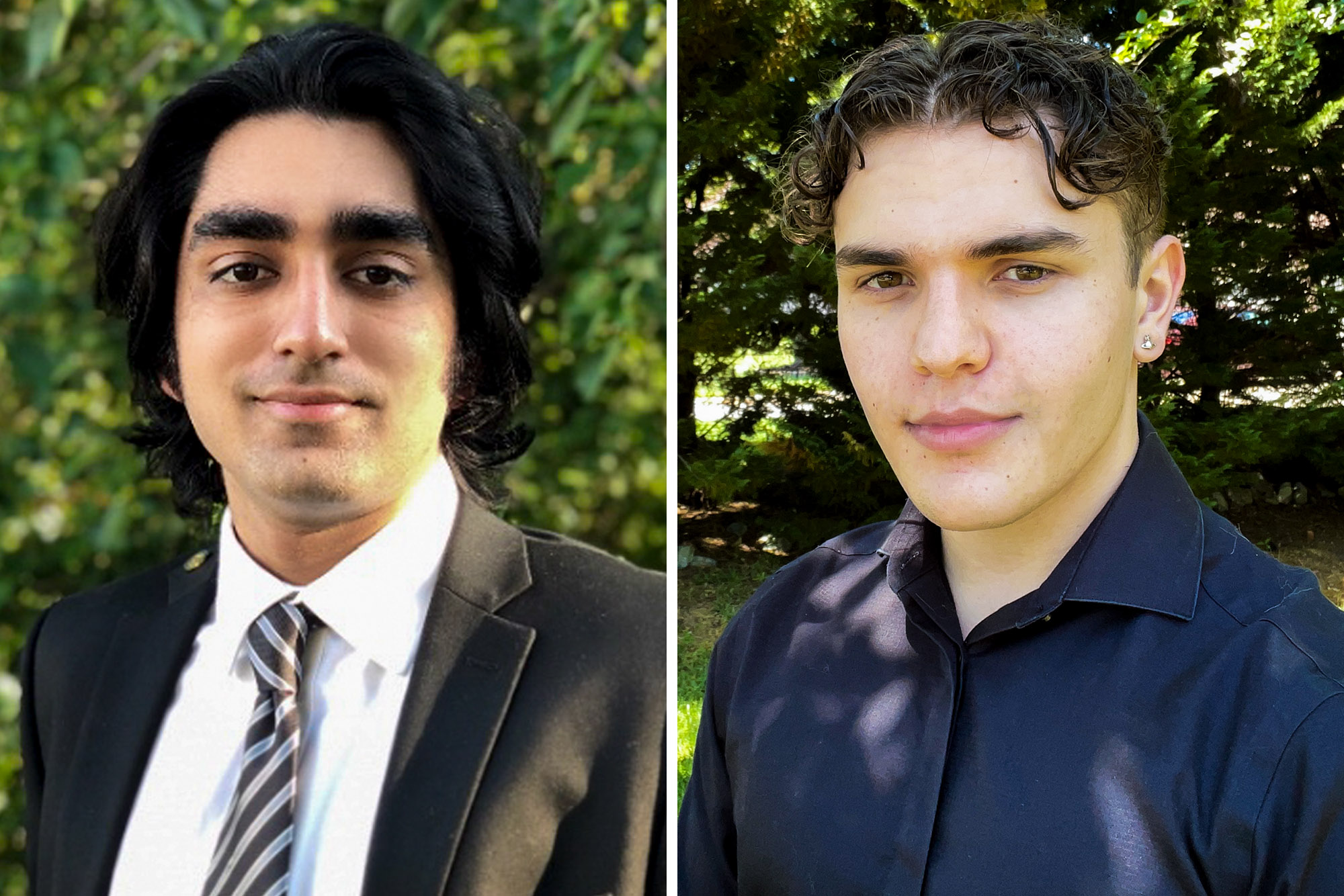 Two rising second-year engineering students at the University of Virginia want to remake the face of online lobbying.

Amayr Babar, a biomedical engineering major, and Ali Houssain Sareini, a computer science major with a minor in data science, are recipients of the Davis Project for Peace award, created by philanthropist Kathryn W. Davis and maintained in her memory. Davis created the award to encourage student initiative, innovation and entrepreneurship focusing on conflict prevention, resolution or reconciliation. The grant provides up to $10,000 in project funding. Their project was nominated through a process facilitated by the Office of Citizen Scholar Development, UVA’s fellowships office.

Babar and Sareini, both from Chesapeake, started working together as high school sophomores at the Deep Creek High School Science and Medicine Academy, representing the school in the Lockheed Martin Code Quest Hackathon.

“Competing at this competition we realized that we work really well together and our skills complement each other,” Babar said. “This experience enabled us to continue to become good friends over the next four years and accomplish winning a special congressional award, thousands of global app downloads, competitions and even running an official political campaign.”

Building on their past work, the pair will use the Davis Project for Peace funding to create a platform, called ImpACT, for people to lobby and influence decision-makers, an idea they developed after being frustrated by other platforms.

“What we hope to accomplish is bringing power back to the people and holding politicians responsible for their actions,” Sareini said. “We want our average user to express concerns over the issues they are extremely passionate about and see real results.”

On some other platforms, he said, users sign their email and name, thus creating an invalid petition – federal, state and local governments require voter eligibility and physical addresses to recognize legitimate petitions – and, having done that, forget about the cause within a few days. Or, they might share a post about their beliefs without being able to get that post in front of someone who can do something about it.

“They have settled for a mediocre system of unverified petitions and social media shares where they hope to raise awareness for their cause,” Sareini said. “This experience has brought our target audience to social media platforms, such as Instagram and Facebook; however, the intermingling of political agendas or social justice with content oriented toward showcasing one’s own personal life creates a false sense of progress in which likes, shares and comments do not convert to real-life impact.”

Because of this, Babar and Sareini see a need for a separate, dedicated platform for political engagement that lets users share posts directly with officeholders.

“What we wish to provide is something that has not yet been created: a direct path of communication for constituents and officeholders,” Babar said. “This is incredibly important since there are myriad issues happening around the country, on both a local and federal level, though they are ignored since they have no developed organizational backing. We wish to bring power back to the ‘common man’ so the average Americans can cause the change they want to see in the country.”

In their system, outlined in their Davis Prize proposal, “Officeholders have the ability to create a profile, comment and publicly respond to community issues which fosters a direct link with registered voters to make legislative decisions that accurately reflect the views of their constituents.” Organizations and officeholders can visibly endorse and promote trending issues to express support.

Babar and Sareini also plan to develop an algorithm to parse a multitude of online articles and cross-reference the “credible” information to educating users on both sides of trending conflicts to avoid some of the misinformation, bias and hate speech that plagues social media.

They are not going into the project blind. The students have already honed their online organizing skills working on a 2020 independent political campaign for Palmer Smith, the youngest mayoral candidate in Chesapeake’s history. Though Smith did not win office, Sareini said efforts get out the vote, particularly young voters, were very educational.

“This effort to gain youth support successfully skyrocketed civic engagement in the least politically involved age range and created a framework that allowed young voters to stay involved for future political events,” he said. “It is from these invaluable experiences that we aim to develop a software solution to create unity in today’s politics.”

Babar and Sareini founded Sabres Media LLC, a software development company specializing in the development of mobile applications on Android and iOS.

Dana M. Elzey, an associate professor in the Department of Engineering and Society is familiar with both students through the Rodman Schols program, which he directs. Babar was named a Rodman Scholar as an incoming student and Sareini joined in fall 2020 following a mid-year selection process.

“Both are incredibly entrepreneurial, self-directed and hard-working as students,” Elzey said. “I enjoyed working with them in the first-year ‘Introduction to Engineering Design’ courses for Rodmans. I found their ideas for application of blockchain structures to improving the honesty and integrity of political campaigns to be original and insightful.”

Matthew Henderson, a lecturer in the department of Engineering and Society, is impressed with the duo.

“Ali and Amayr are chasing tough problems in engineering,” he said. “It’s encouraging to see two bright, creative young engineers exploring the spaces between the technical and the political. And they’ve positioned themselves uniquely to create novel solutions that combine their own technology development expertise and their experience with grassroots political action. They’re both great examples of how a broader understanding of the work engineers can do in the world makes visible all of the profound opportunities to generate positive change.”

Babar is a director of technology at Hoohacks, a 24-hour virtual hackathon. As technology committee chair, he is responsible for ensuring that software needs of UVA’s collegiate hackathon are developed and functional for all participants at the event. As tech-marketing liaison, he facilitated a bridge between the technology and marketing teams to create and manage newsletters on the MailChimp platform. He is a member of the Muslim Institute for Leadership and Empowerment.

Ali Sareini is a member of Google’s Student Developer Clubs, participating in many hands-on workshops to learn how to create cross-platform mobile applications. He participated in HooHacks, developing a finance application that cancels unused subscriptions and invests the saved funds in curated stock portfolios or cryptocurrencies. He is a member of the Rodman Scholars Council and is developing a seminar class in the process of creating applications and publishing on both the AppStore and Play Store.