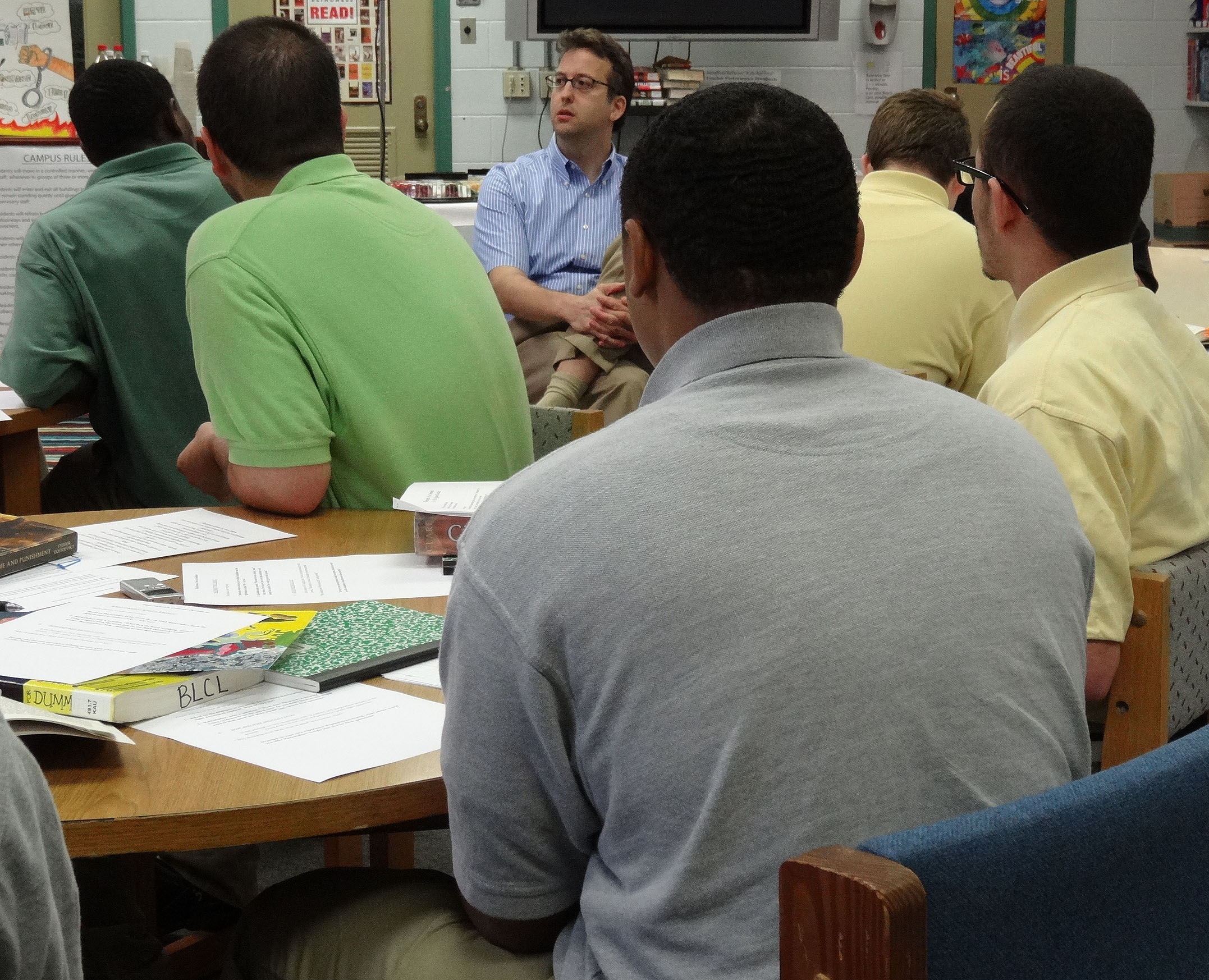 Summer reading is often light fare – a page-turning escape from reality, wherever you happen to be. That wasn’t the case for a new book discussion group, launched in June by University of Virginia lecturer Andrew Kaufman.

The book Kaufman chose for his group to read and reflect upon was “Crime and Punishment” – an art-imitating-life experience for the 12 young men in his book group, all incarcerated juveniles at Beaumont Correctional Center in Powhatan County.

Every Thursday from June 27 through Aug. 13, Kaufman and three U.Va. students met with them to discuss the Russian classic in which the protagonist, Raskolnikov, goes through intense moral anguish after murdering a malicious old pawnbroker and her sister.

“I thought the book might help them uncover the deeper motivations behind their own crimes,” said Kaufman, whose book discussion group is the latest development in his Books Behind Bars service learning program, which he started four years ago.

“A striking example of such critical thinking I’ve witnessed as a result of reading ‘Crime and Punishment’ is that one young man arrested for grand theft auto realized that it wasn’t so much the car he wanted as the thrill of the chase,” Kaufman said. “And another inmate who held up a convenience store to help his family out of poverty – so he thought – realized that the rush of power he felt while committing the crime was even more valuable to him than the money he stole.”

But not even Kaufman could have imagined the strange turn of events that would occur midway through his book discussion sessions, which wrapped Aug. 13: Fugitive Edward Snowden, the former intelligence contractor now sought by the United States on espionage charges, also was given a copy of “Crime and Punishment” while holed up in a Moscow airport, to help him learn about Russian culture and because he might find the novel relevant to his own situation.

That’s what Russian lawyer Anatoly Kucherena, who gave Snowden the copy of the book and who is assisting with his asylum request, told the New York Times in a July 24 article when asked, “Why ‘Crime and Punishment?’”

Kaufman was asked this same question by a Russian TV reporter who contacted him after reading about his Books Behind Bars program in a May 12 Washington Post article, aptly titled “Crime and punishment: Juvenile offenders study Russian literature.”

Time will tell if the novel has an impact on Snowden. Kaufman predicts it will, “If he’s like my students.”

Kaufman, a lecturer in the College of Arts & Sciences’ Slavic languages and literatures department and a center affiliate in the Curry School of Education’s Youth-Nex, the U.Va. Center to Promote Effective Youth Development, has been gathering statistical and anecdotal data, with the help of researcher Rob Wolman and a research team at Curry, since he began teaching his Russian literature course to incarcerated youth.

The data thus far show improvements in incarcerated youths’ behavior, decision-making, social skills, civic engagement, attainment of educational goals (some former inmates are now enrolled in college; one will be attending Virginia Commonwealth University this fall) and a decline in the rate of recidivism – significant given that in recent years more than a third of those released from such centers are convicted of another crime within a year.

“I remain convinced that education, of the kind that develops individuals’ deep critical thinking skills, is an answer for these youth,” said Kaufman, who will be teaching his Books Behind Bars course again in spring 2014.

What’s his reading of the Snowden affair?

Is it possible that Edward Snowden, who has said repeatedly that he was performing a service to his country, is actually a grandiose narcissist with an ideological bone to grind? Kaufman wonders. “I’m not here to judge, but to suggest that that’s a question ‘Crime and Punishment’ can help him confront honestly, just as the book has helped my incarcerated students think about the deeper motivations for their own behaviors.

“Of course, there are obvious differences between the former NSA agent and Raskolnikov, or my students, for that matter. Snowden hasn’t murdered or robbed anybody. Nor, with his comfortable six-figure salary, was he poverty-stricken like Raskolnikov and some of the young men I teach.

“But the psychological parallels between Snowden and Raskolnikov are striking. Snowden is a brilliant, self-educated high school dropout, Raskolnikov a highly intelligent, educated university dropout. Both are loners with few close family ties and friendships. Both are acutely – one might say pathologically – aware of the social injustice that surrounds them,” said Kaufman, author of the forthcoming “Give ‘War and Peace’ a Chance: Tolstoyan Wisdom for Troubled Times” (Simon & Schuster, May 2014).

And what do Kaufman’s students have to say of Snowden?

“He was standing up for what he believed,” said one resident.

“He was a snitch,” retorted another, adding, “There’s other ways to change things.”

“For every action there is a consequence,” said another, making a direct connection between Snowden and the protagonist, Raskolnikov, in Dostoyevsky’s novel.

“As Dostoyevsky understood so well, the road to hell – whether personal or social – is often paved with the noblest intentions,” Kaufman said. “Snowden might take solace in another of the Russian writer’s insights: No matter how badly we may have made a mess of our lives, redemption is always available to us.

“That’s a Dostoyevskian message Raskolnikov eventually takes to heart. It’s a message many of my incarcerated students have embraced, as well. After reading ‘Crime and Punishment,’ Snowden might want to join them.”

A Year We Will Never Forget: 2019-20 in Review END_OF_DOCUMENT_TOKEN_TO_BE_REPLACED

‘What Will You Carry With You?’ Remarks From UVA President Jim Ryan END_OF_DOCUMENT_TOKEN_TO_BE_REPLACED