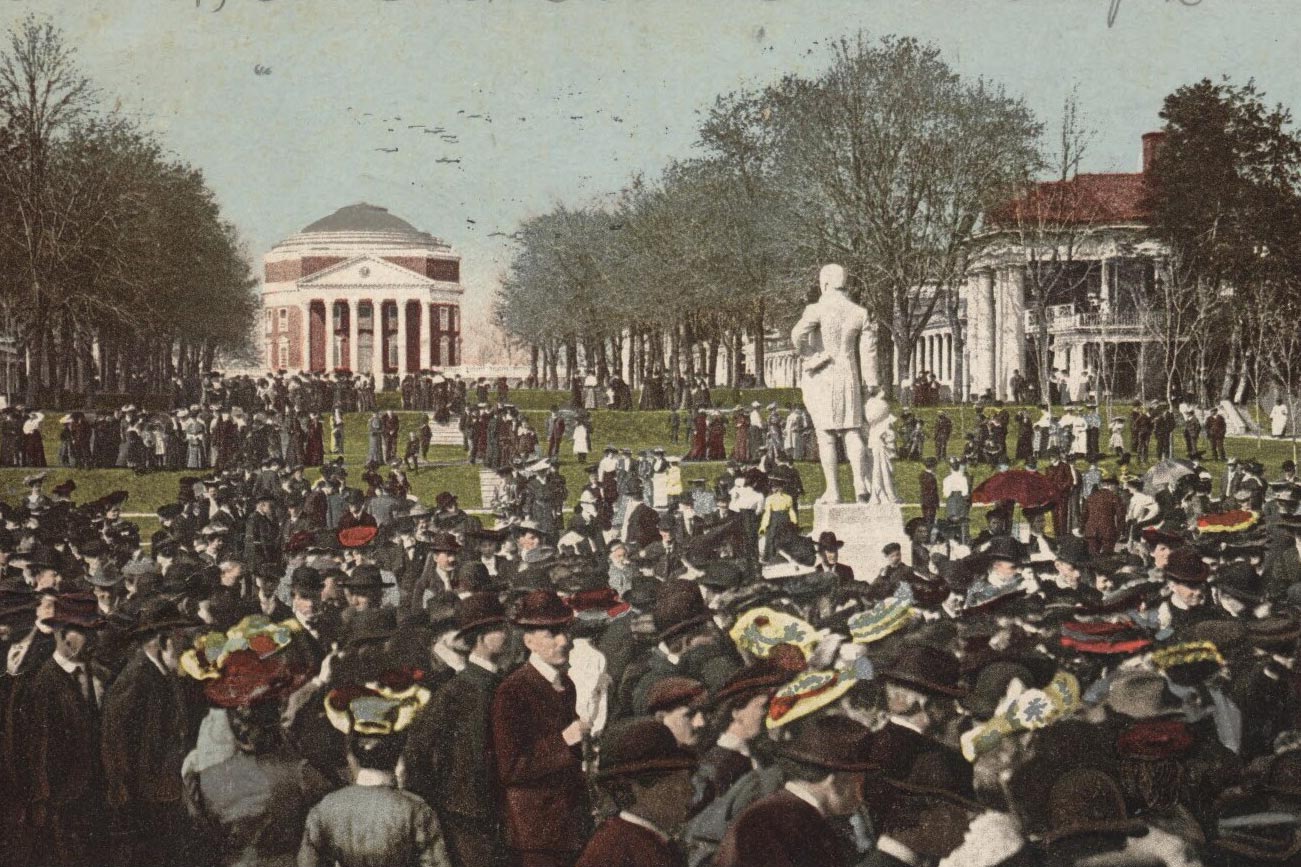 Before there was Jim Ryan, who will be inaugurated Oct. 19 as the University of Virginia’s ninth president, there were eight previous University presidents with eight different inaugurations.

As Rector Frank M. “Rusty” Conner III prepares to administer the oath of office to Ryan, here’s a look back at those previous ceremonies – five of which also were held in October – and how the fanfare of installing a new president has changed over time.

UVA Today spoke about the historic inaugurations with Alexander G. “Sandy” Gilliam Jr., the University’s history officer. Herewith is his recounting of those events. 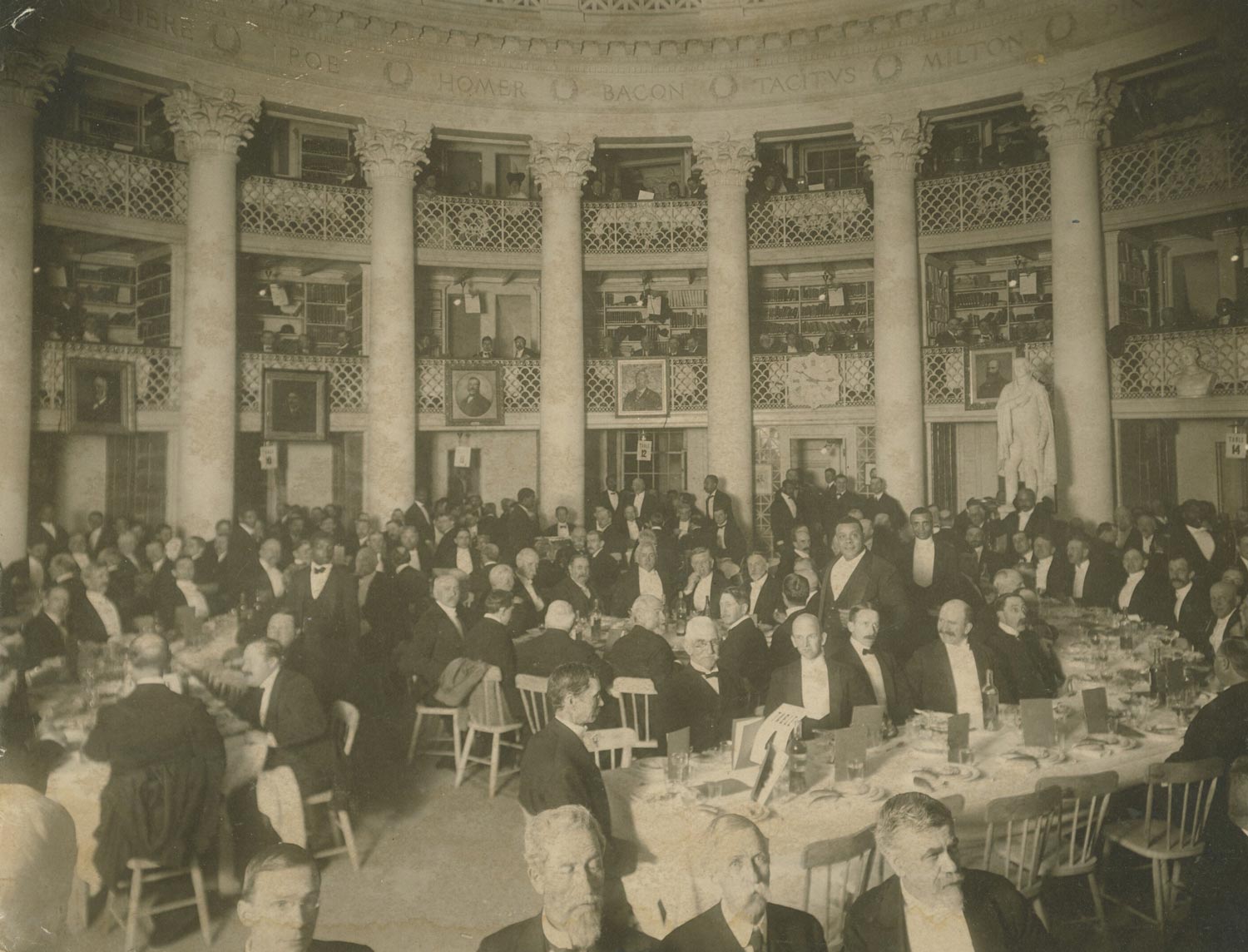 Yes, you are reading that date correctly. UVA’s first president was installed nearly eight decades after it held its first classes in 1825. Gilliam said that is “because Thomas Jefferson, the University’s founder, decided for a variety of reasons (one being that in 1825, the year it opened, the University could not afford a president) that there be none.”

By the end of the 19th century, with a more complex university, it was clear that a president was needed. The Board of Visitors elected Alderman to the post on Sept. 15.

Never having planned an inauguration ceremony before, the board decided to take some time to plan carefully. A long, lavish celebration was held the following Founder’s Day, April 13, Jefferson’s birthday.

“The excitement, exuberance and sheer fun of the day shines through in all of the contemporary accounts, both the official versions and the newspapers printed the next day,” Gilliam said. “In a time when Virginians still relished such things, the inauguration provided endless oratory, some of it still good to the modern ear, though much was likely bombast and would be considered long-winded nowadays.”

“Alderman was a masterful orator, and his address was an important and eloquent speech in which he emphasized the role of the University in the life of Virginia and the nation, as well as the University’s responsibilities to both the Commonwealth and to the country as a whole,” Gilliam said. 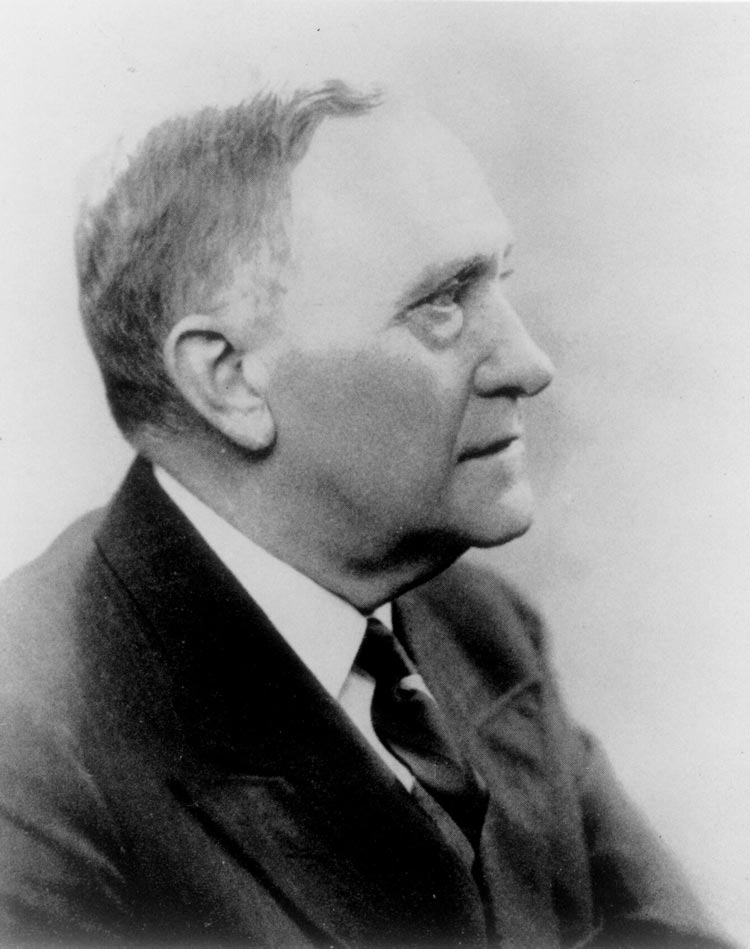 Gilliam said his inauguration was a simple occasion and was included at graduation, meaning Gov. George Peery, who was already scheduled to speak, could deliver a single speech. There were no other official delegations.

“Heavy rain began that morning, so the procession down the Lawn was cancelled, and the Exercises moved to the Memorial Gymnasium,” Gilliam said. “The Rector, Frederic W. Scott, performed the brief and simple ceremony of installation. President Newcomb made a short speech, Governor Peery spoke in a way appropriate to both the inauguration and commencement, and the Commencement Exercises proceeded as usual.”

In his brief address, Newcomb even spoke of his appreciation of the event’s lack of pomp.

“It is a source of great satisfaction to me,” he said, “that this induction is of simple form, for it enables me to speak in an informal fashion which might be lacking in good taste under other circumstances.” 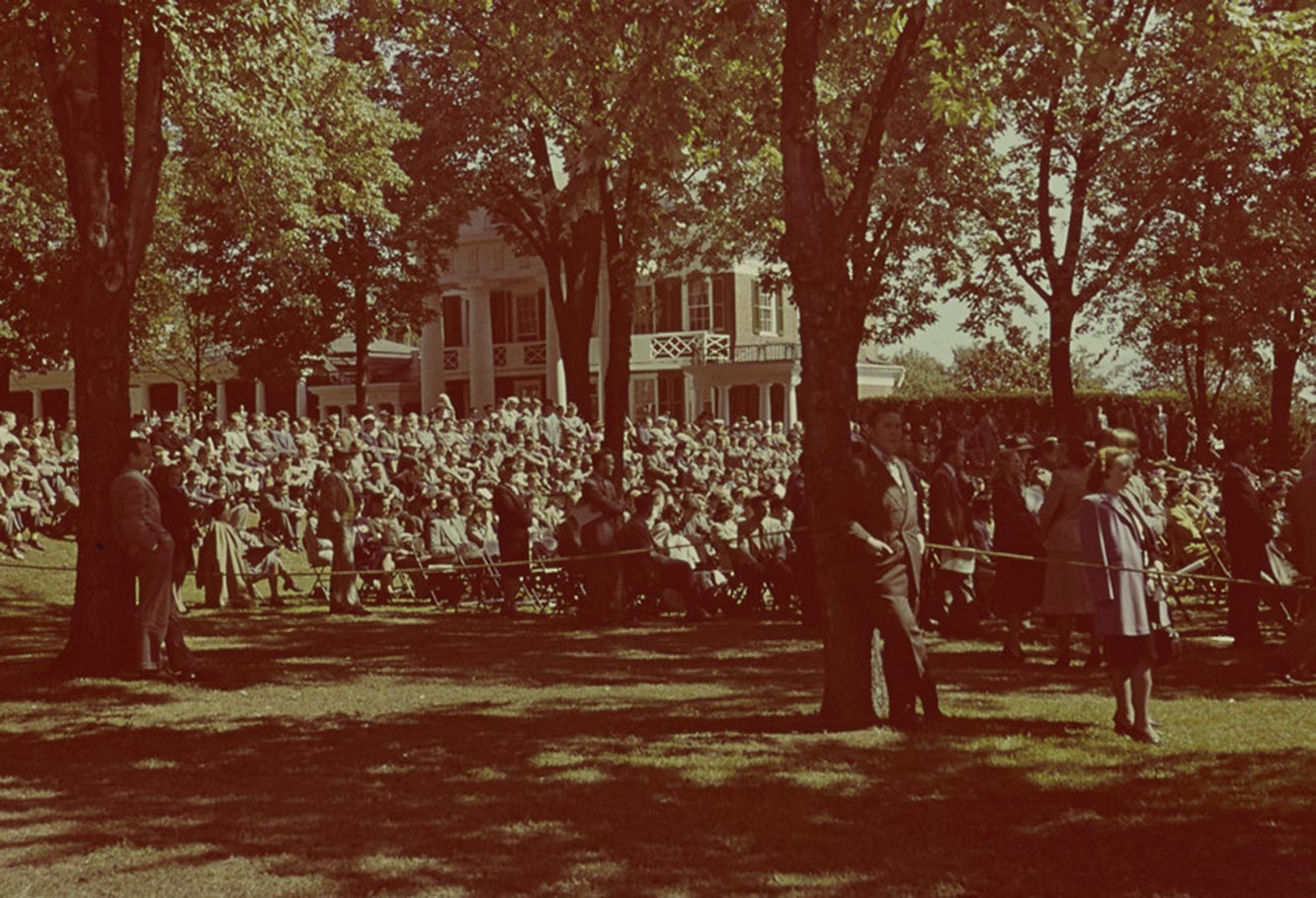 “President Newcomb announced his retirement in the spring of 1947, and the Board of Visitors elected Colgate W. Darden, Jr., an alumnus of the University, a recent governor of Virginia, and a former member of the United States House of Representatives,” Gilliam said. “He was inaugurated as the third President of the University on Oct. 1, 1947, on a beautiful, though crisp, day.”

The format of his installation has been used at presidential inaugurations ever since. The procession began at the Lawn-side steps of the Rotunda and marched down to Old Cabell Hall.

“The event was held on the Lawn, with the speakers on the platform of a temporary acoustical shell that had been erected in front of Cabell Hall for the ceremony and for a concert by the Philadelphia Symphony Orchestra to be held later that day,” Gillam said.

He said the performance stands to this day as probably the best music played at a presidential inauguration at the University.

“The Philadelphia Orchestra, under the direction of the great Eugene Ormandy, gave a concert on the Lawn at 3:30,” Gillam continued. “They played, not surprisingly, Brahms’ Academic Festival Overture, but also Brahms’ Third Symphony and a piece on Don Quixote by Richard Strauss.” 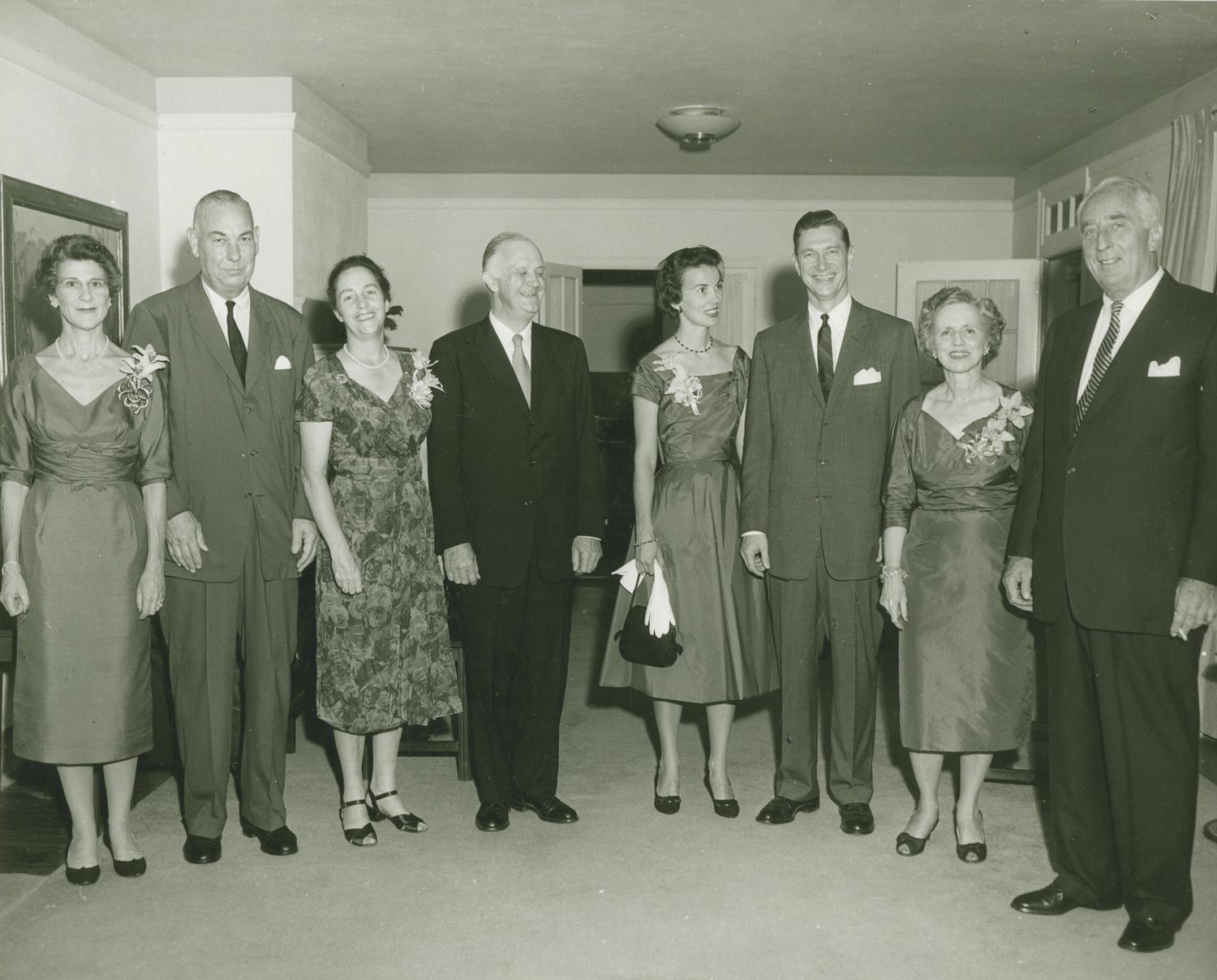 The Alumni News observed that the installation of Edgar F. Shannon, Jr., a member of the English faculty, came on “a midsummer day which delayed its appearance until autumn.”

Gilliam said an unusual aspect of the ceremony was a speech by Geoffrey R.G. Mure, the warden of Merton College of the University of Oxford, the college Shannon had attended as a Rhodes Scholar. “In Mure’s elegant speech, he recalled longstanding ties between Jefferson and Old Mertonians, reminding the audience of the gift of a pinnacle from the 15th-century tower of Merton Chapel, which had been presented to the University in 1927.”

Later that afternoon in the McIntire Amphitheater, the Philarmonia Hungarica played Mendelssohn’s Fourth Symphony, an overture by Carl Maria von Weber and music from composers Bela Bartok and Zoltan Kodaly. Gilliam said the musical ensemble was very popular in the United States and Western Europe and “was made up of Hungarian musicians, chiefly from the Budapest Philharmonic, who had fled their homeland in the wake of the Soviet suppression of the Hungarian Revolution of 1956.” 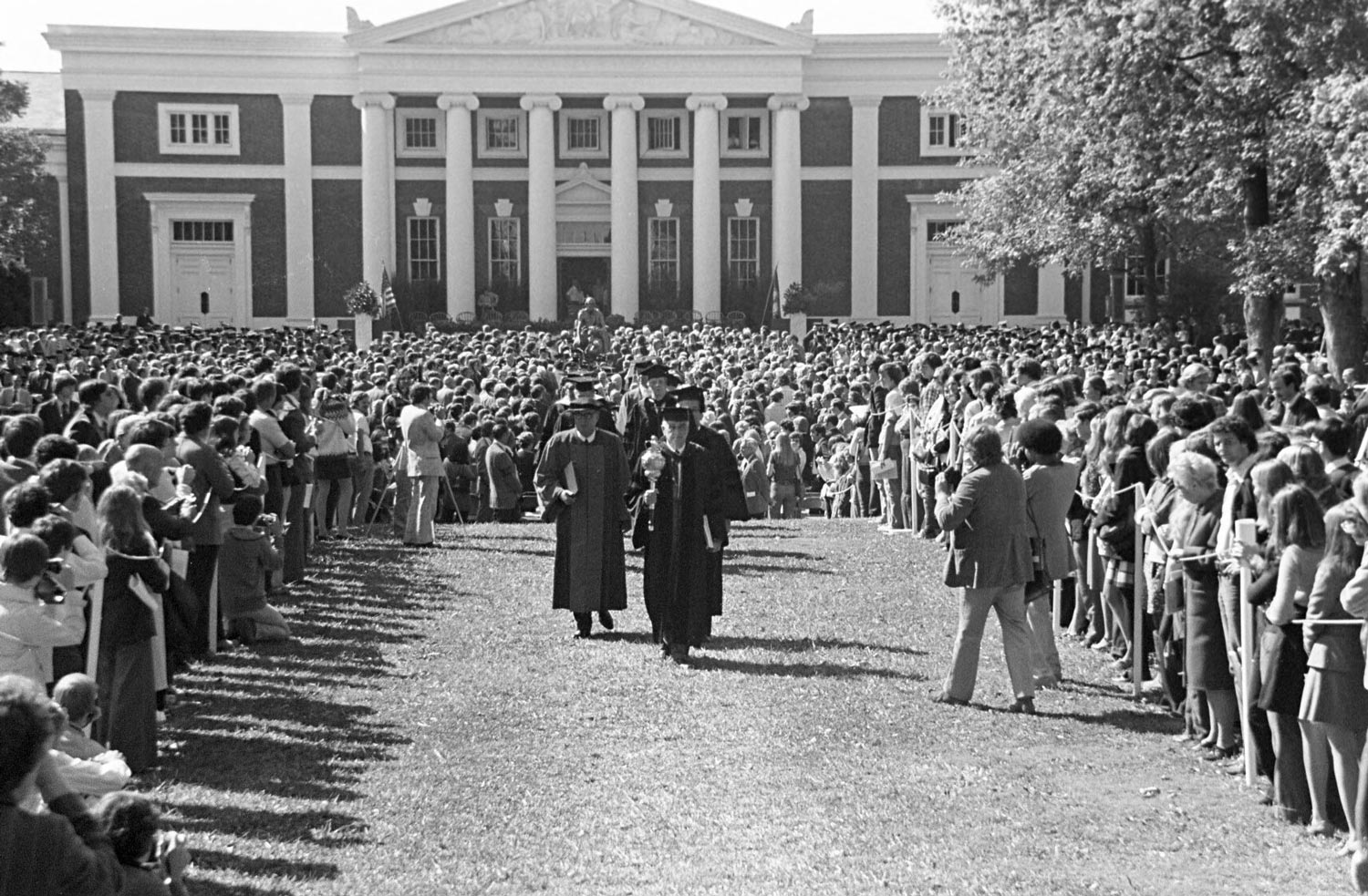 “The fifth President of the University, Frank L. Hereford, Jr. – an alumnus, a distinguished member of the Physics Department (he had worked on the Manhattan Project as a student), and provost of the University – was inaugurated on Oct. 9, 1974,” Gilliam said.

The procession included delegates from Virginia sister universities, more faculty than usual, a considerable number of students and representatives of various clubs.

“Even though the Rotunda was undergoing restoration and was under scaffolding, the procession started there as usual to march to the area at the steps of Cabell Hall, where the inaugural exercises were held,” Gilliam said. “During the procession, the Concert Band played the ‘Jefferson Festival March,’ composed by professor Walter Ross of the Music Department especially for the inauguration.”

After Hereford took the oath of office, Gov. Mills Godwin noted, “While it would be difficult to overstate the importance of this occasion in the spectrum of higher education in Virginia, it is perhaps instructive to note that the University managed to survive for its first 100 years without any president at all.

“In fairness,” he went on, “I must add that under a succession of extremely able men, it has become an internationally known institution of higher learning and a repository of Virginia tradition instilled in generation after generation of the leadership of this commonwealth.” 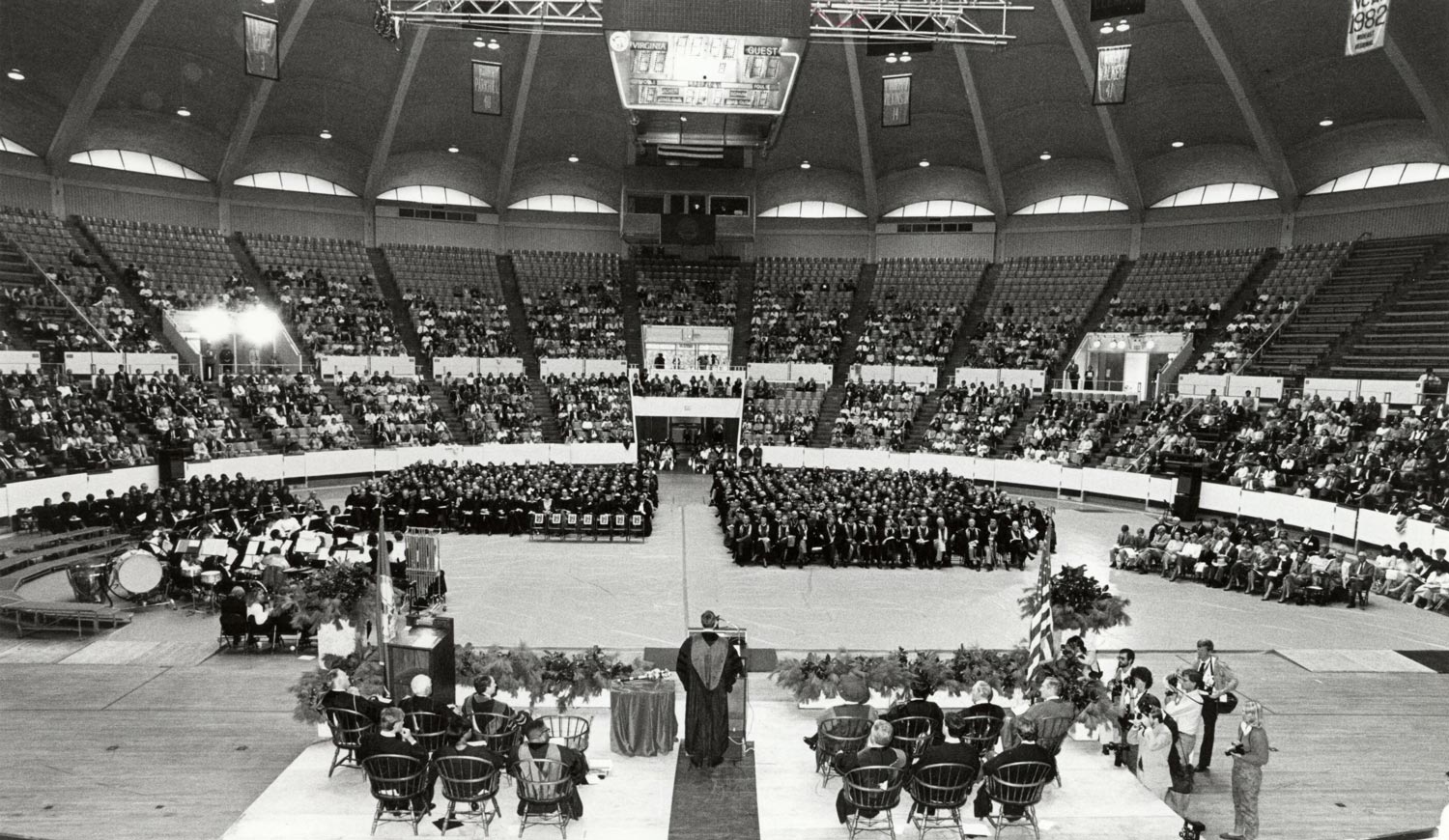 The Board of Visitors elected Robert M. O’Neil, a legal scholar and chancellor of the University of Wisconsin System, as the sixth president. He received all of his degrees from Harvard University.

“President O’Neil’s Inauguration, scheduled for Oct. 2, 1985, was planned to be similar to the Darden, Shannon and Hereford inaugurations,” Gilliam added, “but heavy rain forced the ceremonies to be moved, this time to University Hall, and the president’s reception for students on the afternoon of Inauguration Day was moved to Memorial Gymnasium.”

Music professor Ross composed a new piece, “The Silver Mace,” for the processional, as he had done for Hereford. Officers of several student organizations marched in the procession, and the chair of the Honor Committee, president of Student Council, the chair of the Judiciary Committee and the president of the Class of 1986 were included as members of the presidential party. After O’Neil’s address, the University Symphonic Band played “Commonwealth Salute,” composed for the occasion by music professor Judith Shatin.

For the first time, an inauguration coincided with the University’s Fall Convocation, at which Intermediate Honors are presented and the Thomas Jefferson Award is given to an outstanding member of the faculty. 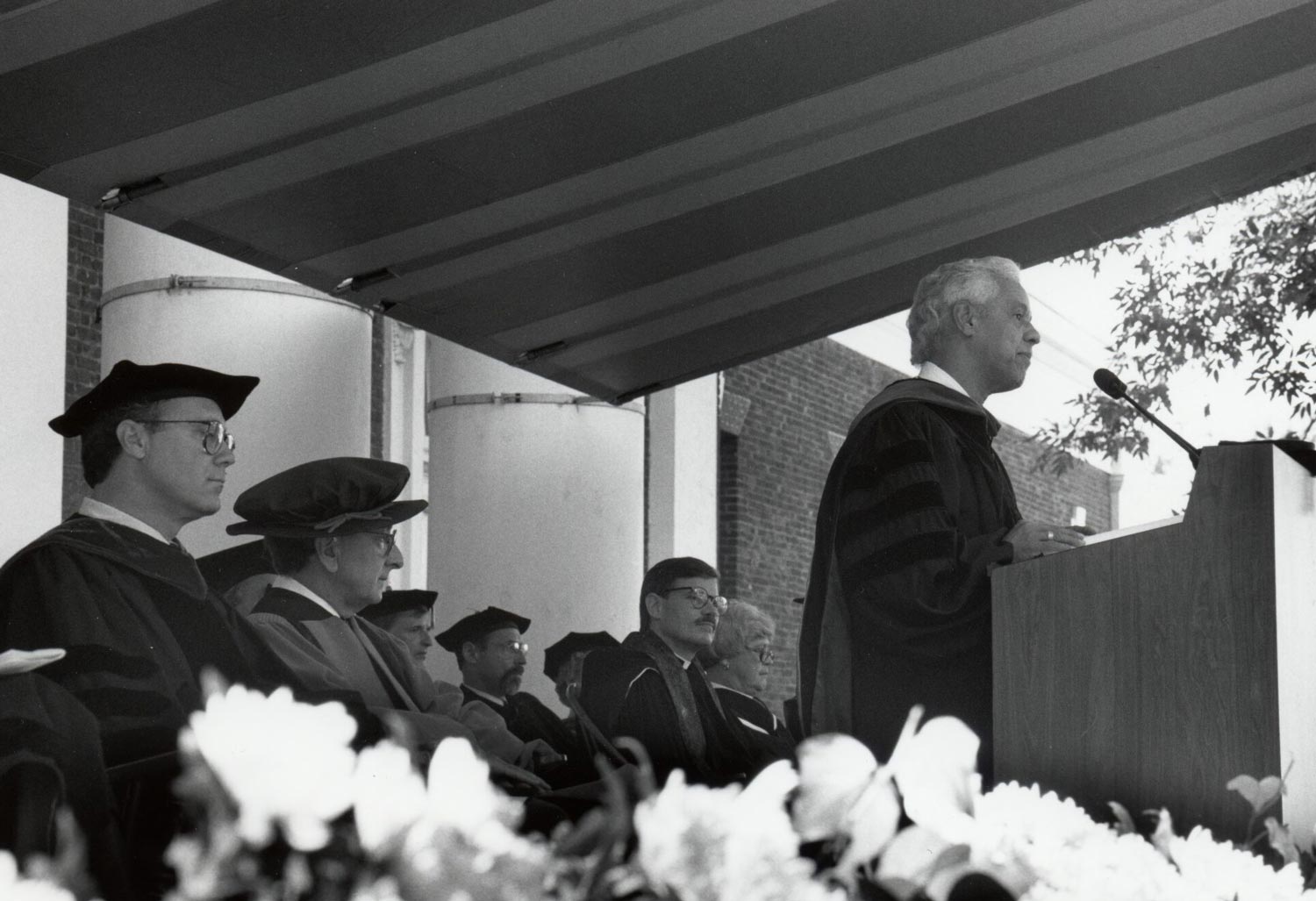 John T. Casteen III was elected the seventh president in March 1990. At the time he was president of the University of Connecticut, but before that he had served as the dean of admission at UVA and as Virginia’s secretary of education. He holds three degrees from the University.

“As with President O’Neil, his inauguration coincided with the Fall Convocation,” Gilliam said. “Fortunately, the weather was flawless and the ceremonies were held on the Lawn in front of Cabell Hall. Professor Walter Ross of the Music Department once again composed a piece for the occasion: ‘Fanfares on Medieval English Melodies,’ which was played by the University Winds and Brass Ensembles as part of the processional.”

Following his oath of office, Casteen shared his plans as president, “but his speech was more personal than most, in that he talked about his own education at the University and the teachers who influenced him, many of whom were in the audience,” Gilliam said.

That afternoon, Casteen and his wife welcomed students and their parents at the presidential residence, Carr’s Hill, for a reception that blended elements of the inauguration and Parent’s Weekend. 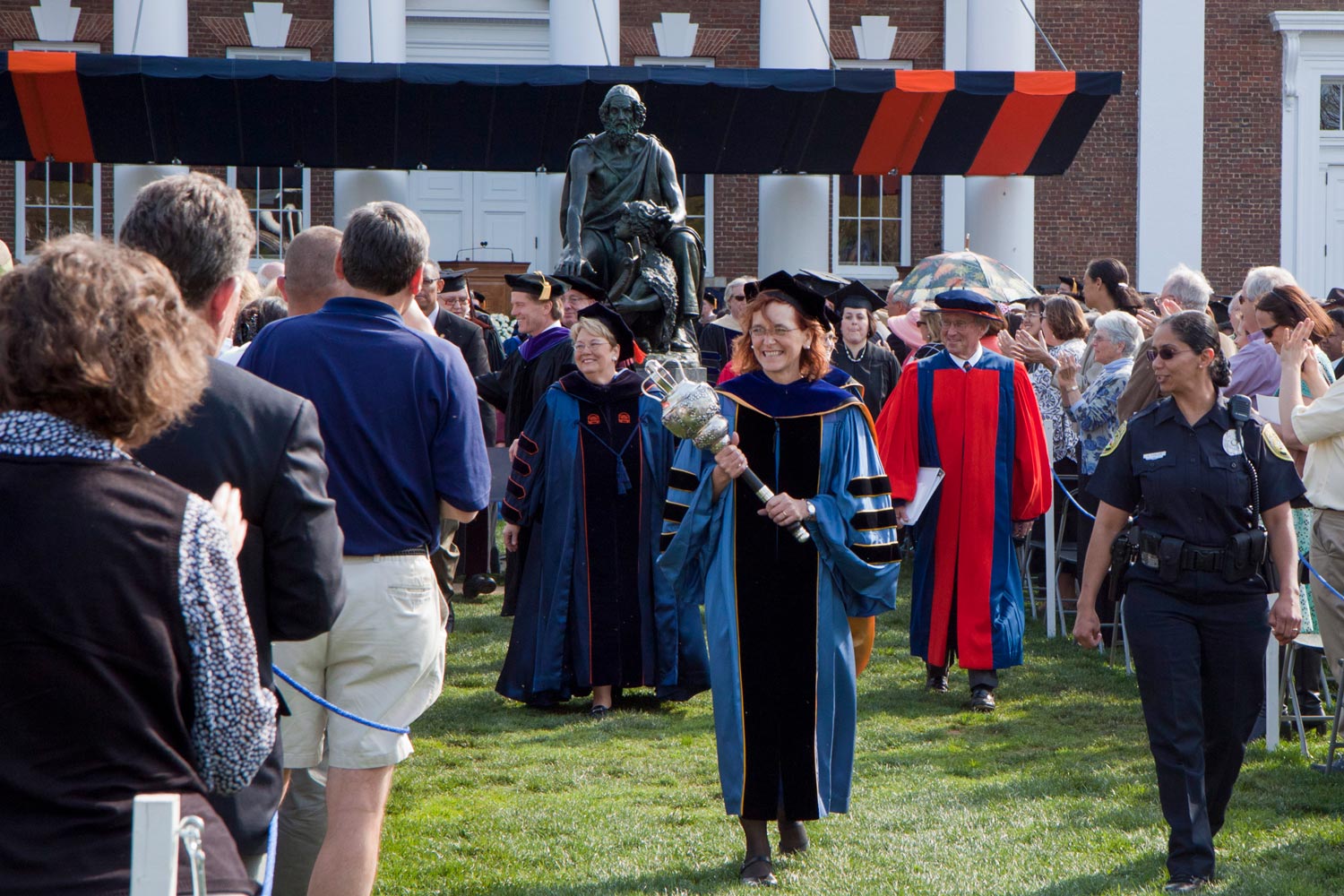 President Teresa A. Sullivan is UVA’s first female president. Her installation took place on a warm, sunny April afternoon just outside Old Cabell Hall. She laid her left hand on a well-worn family Bible from the 19th century as she took her oath.

Guests included Virginia Gov. Robert F. McDonnell; University of California President Mark Yudof, a mentor when Sullivan was at Texas; former UVA President Robert M. O’Neil; and Sullivan’s former boss at the University of Michigan, President Mary Sue Coleman. Sullivan in her remarks recognized her husband, Douglas Laycock, who teaches in the UVA School of Law; their sons, Joseph and John, and family members who had traveled across the country to attend.

In her inaugural address, Sullivan compared the revolutionary era of the University’s founding to the contemporary “knowledge revolution.”

“The revolution led by Jefferson and his collaborators was a political and military revolution,” she said. “Our revolution is a knowledge revolution playing out in classrooms, laboratories and libraries around the world.”

The history of Jim Ryan’s inauguration will be written Oct. 19 with his installation as UVA’s ninth president. The ceremony takes place at 3 p.m. on the Lawn.

Let Us Know You're Coming

A Year We Will Never Forget: 2019-20 in Review END_OF_DOCUMENT_TOKEN_TO_BE_REPLACED

‘What Will You Carry With You?’ Remarks From UVA President Jim Ryan END_OF_DOCUMENT_TOKEN_TO_BE_REPLACED