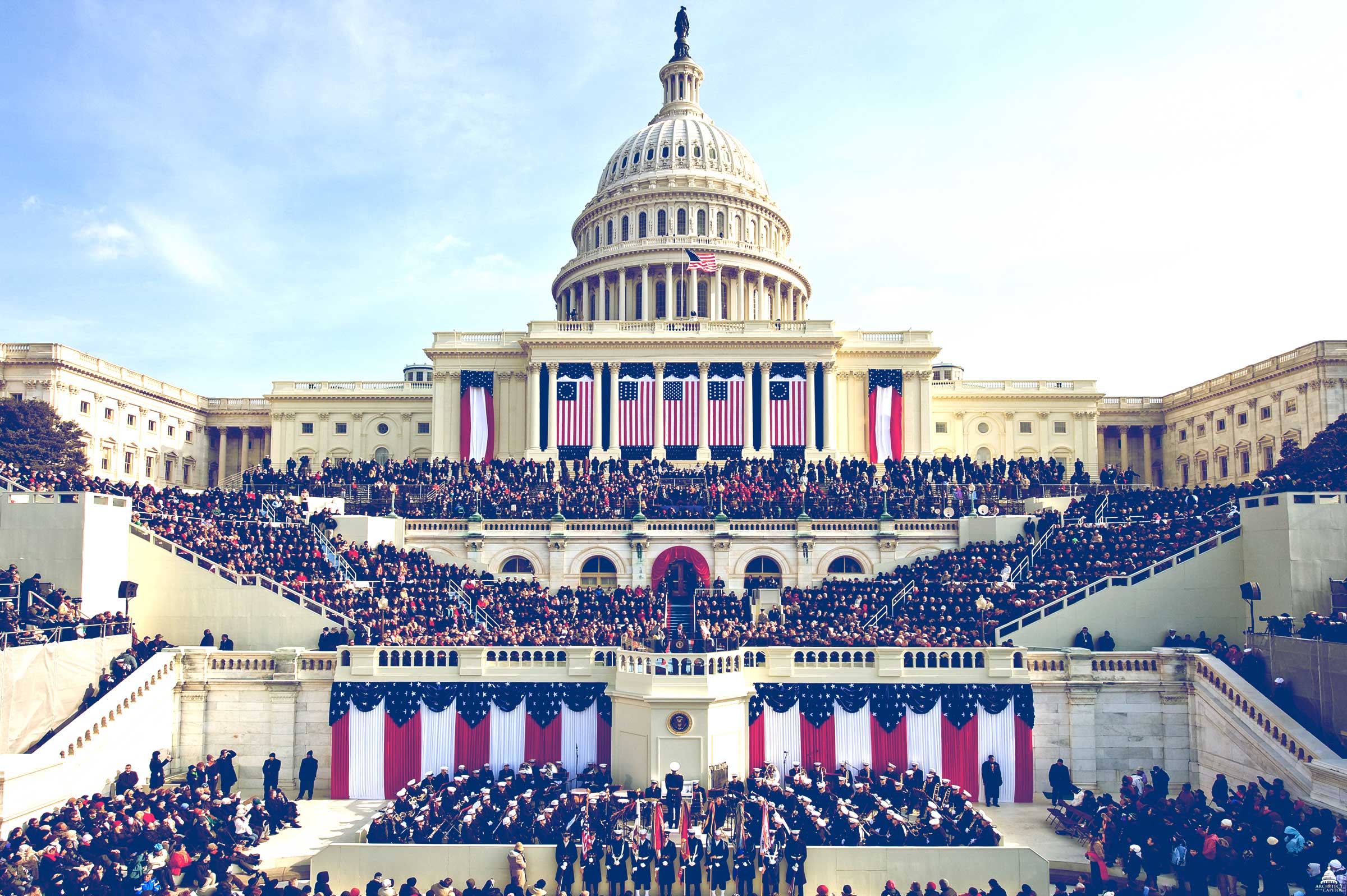 Starting with the presidency of Jimmy Carter, the University of Virginia’s Miller Center has compiled the most extensive oral history of the American presidency, interviewing key administration officials who witnessed it up close. Among the many hours of recordings from the Presidential Oral History program are firsthand accounts of inaugurations past.

In honor of Friday’s inauguration, Miller Center historians Barbara Perry and Brian Balogh joined UVA Today to discuss these modern remembrances and share their own takes on some of the most unusual moments in inaugural history.

Balogh is the co-host of the Virginia Foundation for the Humanities’ popular radio program, “BackStory with the American History Guys,” and director of the National Fellowship Program at UVA’s Miller Center. Perry is the director of presidential studies at the Miller Center and co-chair of the Presidential Oral History program. Below, in no particular order, they look back at some of the most memorable presidential inaugurations.

“I think the most important inauguration is George Washington’s, because nobody really knew what to do,” Balogh said. “They were making up everything as they went along.”

Washington and others were very concerned about the event appearing too royal. Debates raged about the proper decorum.

“Washington was very worried about coming across as a king – that would be bad – so he did his best to dress very plainly for the inauguration,” Balogh said. “But he kind of blew it by wearing shoes with diamonds on them.”

Eyewitness accounts make it clear that Washington was affected by the gravity of the moment. After taking the oath of office on the steps of Federal Hall in New York City, he went inside to deliver his address to Congress and his hands visibly shook as he spoke of the great responsibility of the new government.

“It so happens that Reagan’s ’81 and ’85 inaugurals are the two extremes for temperature,” Perry said. “The 1981 inauguration is the warmest on record and 1985 was the coldest. It was so cold that they had to hold the swearing-in ceremony indoors.” 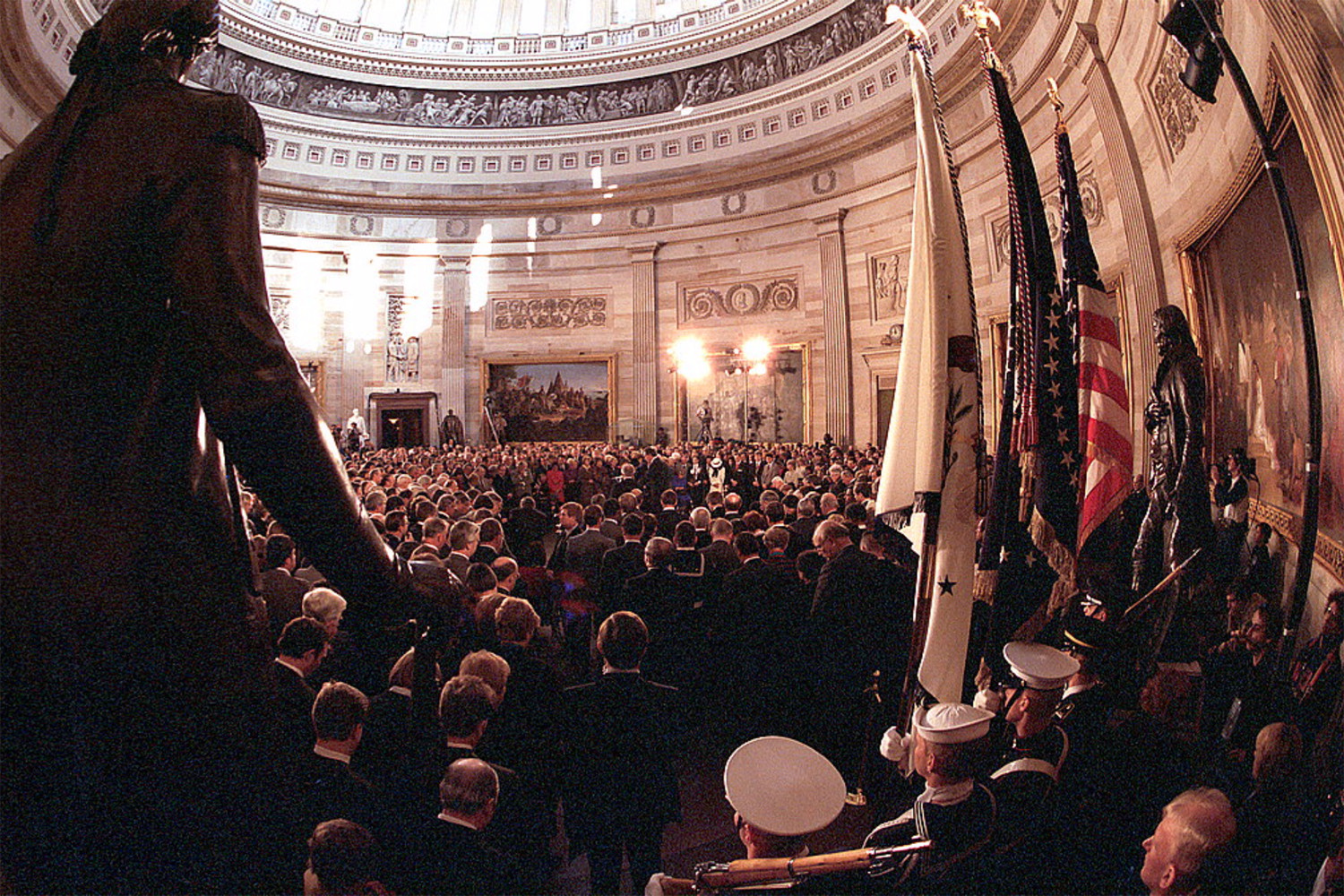 In 1981, temperatures climbed to 55 degrees, and 1985 saw a high temperature of 7 degrees, with a wind chill in the negative digits. In her Miller Center recording, White House staffer Joanne Drake, a member of the second Reagan inaugural committee, remembers how the president took special care to make sure the many bands that were meant to march in the 1985 parade still got to perform.

Reagan also holds the distinction of being the first president to give his inaugural address facing the National Mall. Previous presidents had spoken from the east side of the Capitol.

Reagan’s personal assistant, James Kuhn, remembered the intense advance planning that went into that first Mall-facing inauguration, and a few funny mishaps that forced staffers to think on their feet.

“Kennedy climbs to the top of the unusual inaugural list as the youngest person ever sworn in as an elected president and as the first Roman Catholic president,” Perry said. “His inaugural address is also often viewed as the second-greatest in comparison to Lincoln, who usually comes in first.” 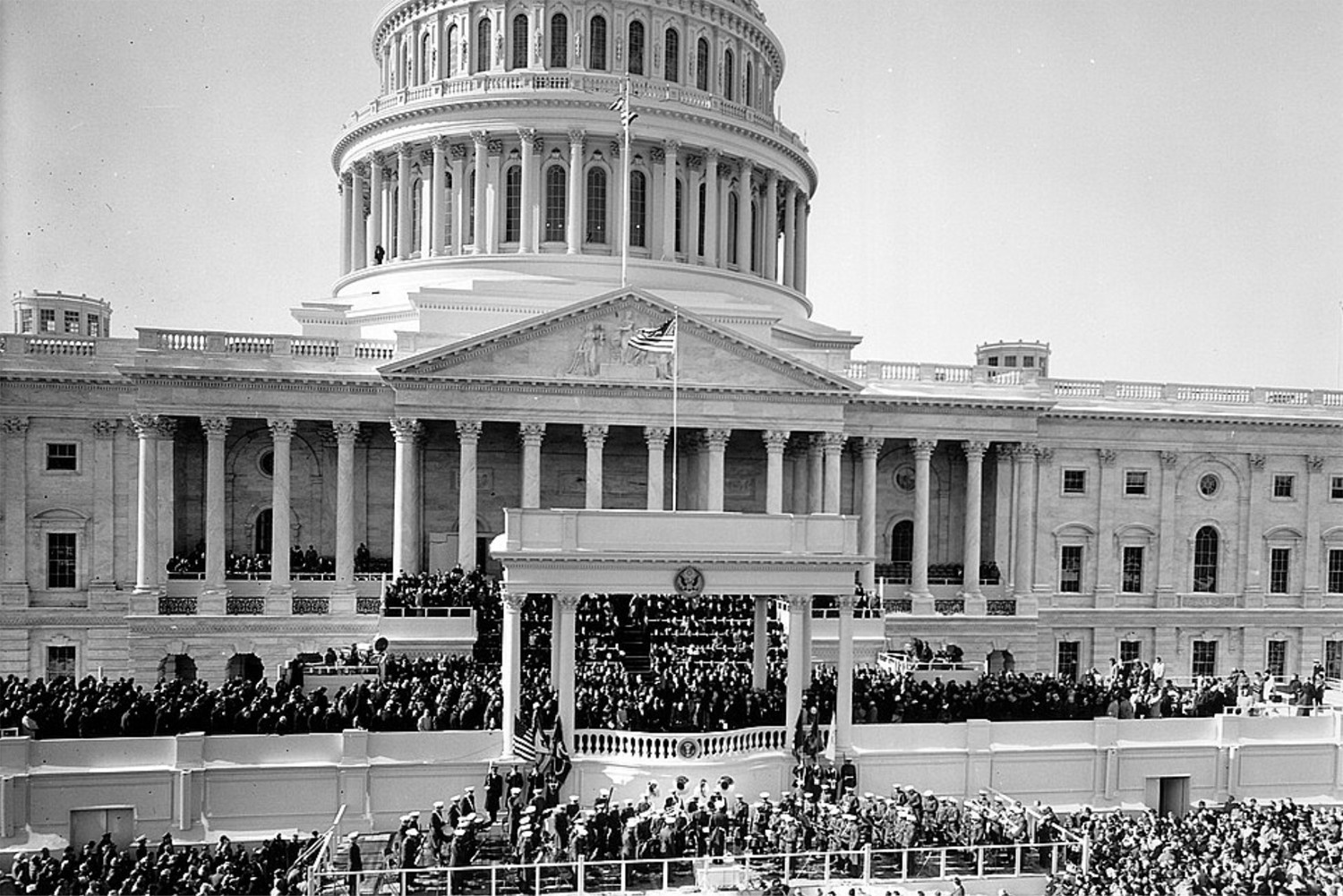 Kennedy was known as a master of television, and purposely played up his youthful image through the campaign and into his inauguration and presidency. He took care to always appear with a tan, and though his inauguration was bitterly cold, he refused to wear an overcoat as he gave his address.

He was similarly focused on appearing cultured and publicizing his interest in the arts. As a result, his 1961 inauguration was the first one to include a recitation from a great American poet. Robert Frost, then in his late 80s, recited his famous poem, “The Gift Outright.”

“One president to focus on this year is Andrew Jackson. If I had to name a precedent for Donald Trump, I think it would be Andrew Jackson. Both of them were alpha males. They expressed their opinions pretty freely and both were real populists,” Balogh said. 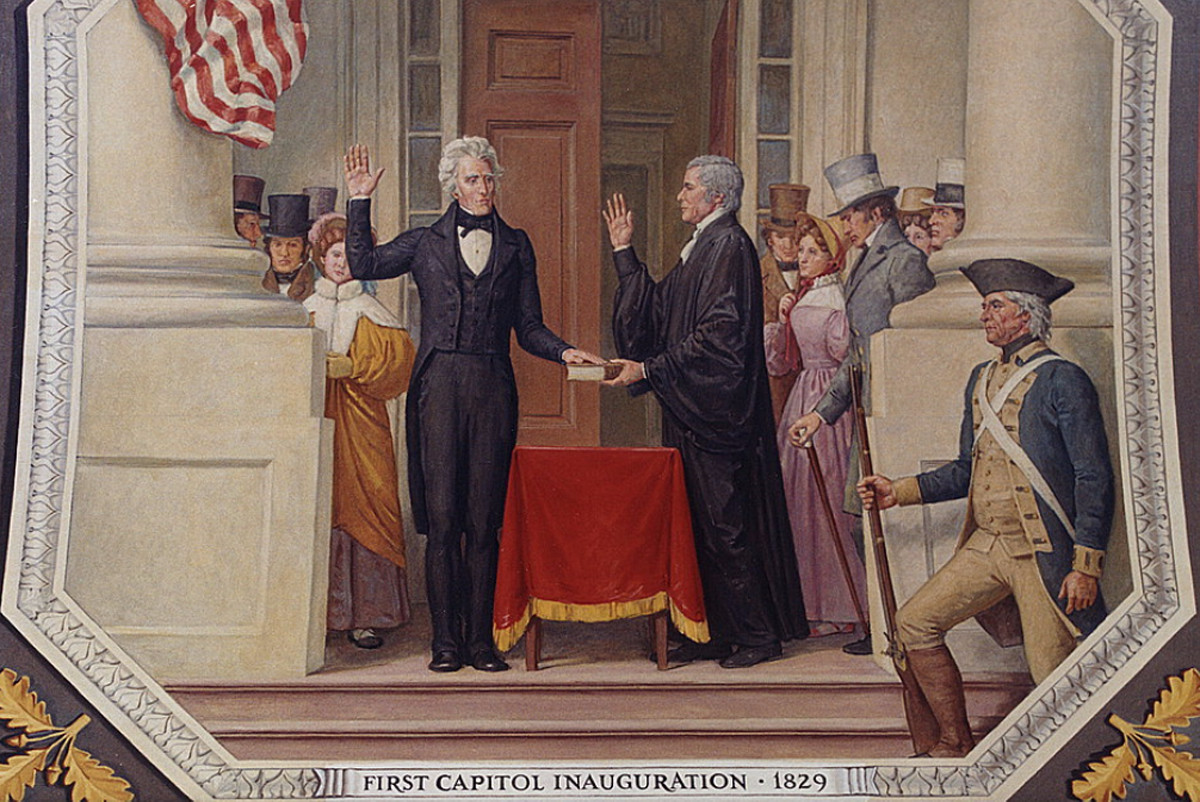 Jackson took the oath of office on March 4, 1829 after a brutal race against John Quincy Adams, and his many supporters arrived to Washington in droves to see his inauguration.

While some accounts of the event are likely exaggerated, Jackson’s inauguration is widely considered to be one of the most raucous in American history.

“Thousands of people came to Washington and these were not the usual elite, polite types. These were a good representation of the common folk. They flooded the White House during the then-traditional open house,” Balogh said. “Everyone definitely had a good time at the punch bowl and things got a little out of hand. I am not sure that the carpet ever recovered.”

Jackson had to slip out to escape the pressing crowd and the White House steward eventually lured visitors back outside by placing the punch on the lawn.

Roosevelt earns a spot on the list of memorable inaugurals as the only president ever to have four, and as a new president during an extremely tense power hand-off in 1933. 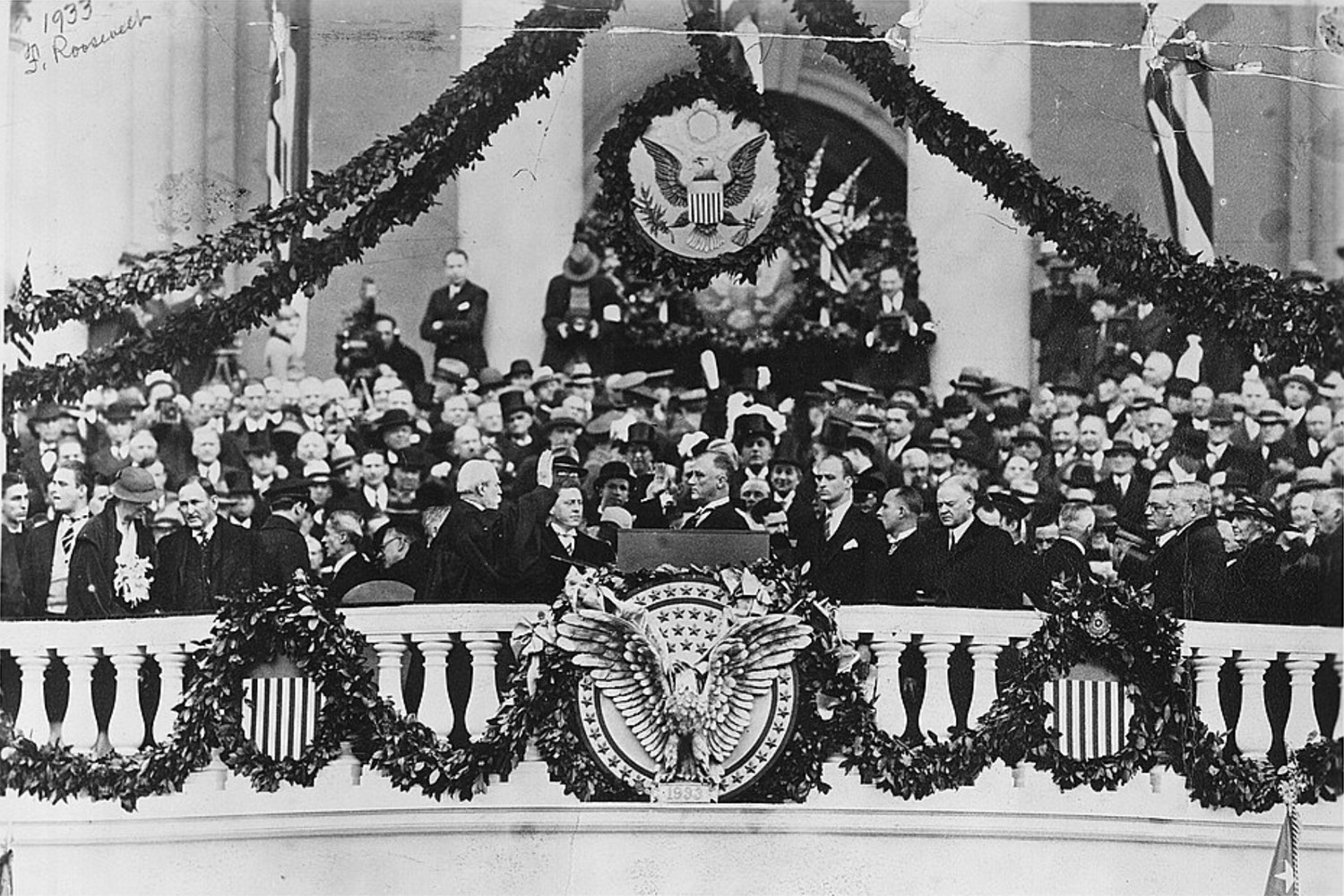 When he first took office, America’s banks were failing, the unemployment rate was skyrocketing and there was no love lost between him and his predecessor, Herbert Hoover.

“Hoover did attend Roosevelt’s inaugural and they did ride in an open air car together, but they sat there in stony silence and apparently didn’t say a word to each other the entire time,” Balogh said.

Notably, Roosevelt was also the first president to be inaugurated in January, when he took the oath of office in 1937 for his second term following the ratification of the 20th Amendment.

Although Jimmy Carter was taking office after Gerald Ford, he and his team were determined that he appear in stark contrast to Richard Nixon. The scandal of Watergate and the idea of Nixon’s “imperial presidency” were still resented around the country. 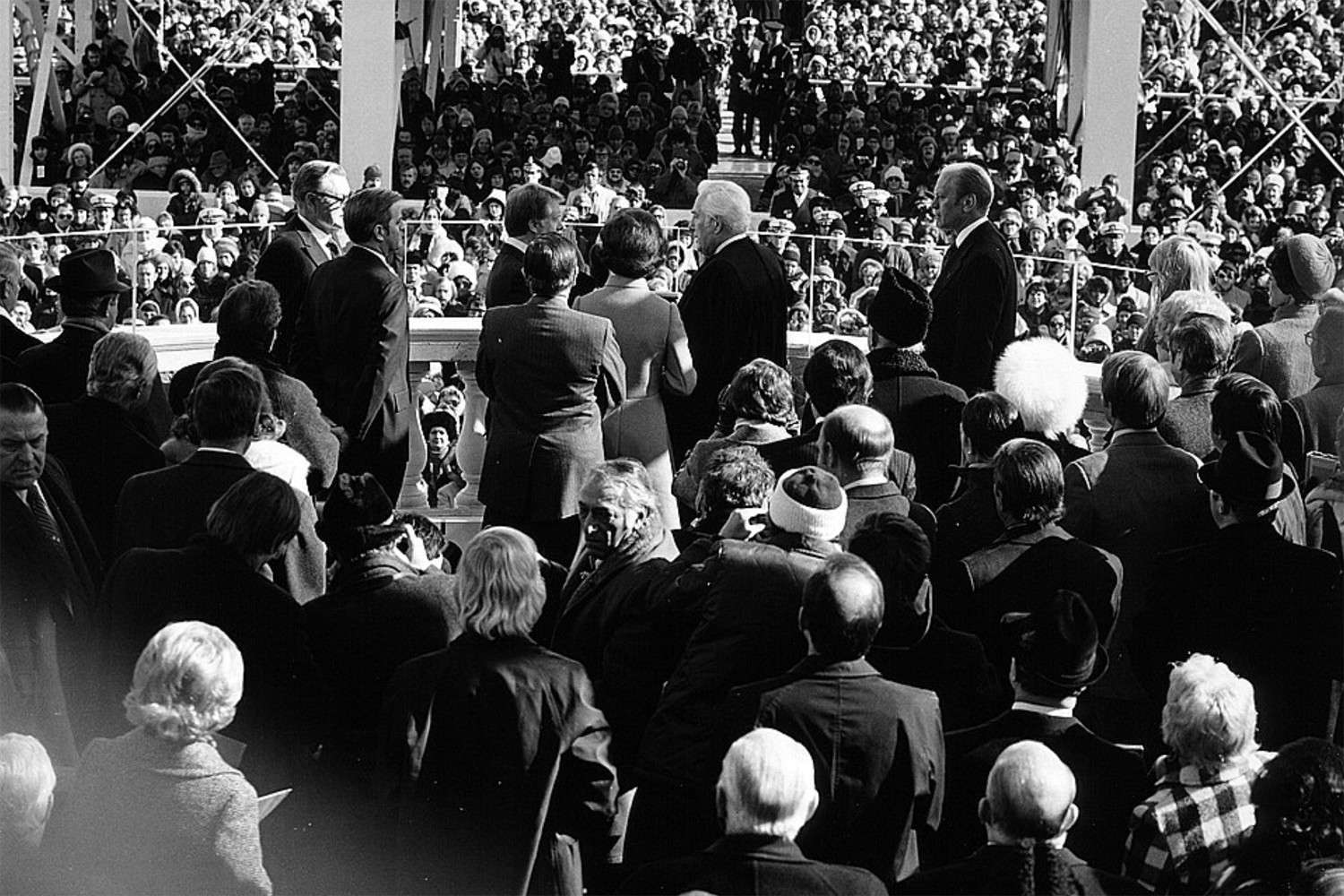 Nixon was very concerned with the pomp of the presidency. At his own inauguration, his team even went so far as to poison part of Washington’s pigeon population so they wouldn’t sully the parade route – a tactic that backfired when people had to wade through dead pigeons along the street.

Determined to look like a man of the people after the excesses of the Nixon years, Carter skipped the traditional car ride and was the first president to walk from the Capitol to the White House after his inauguration.

“He not only was truly a populist at heart, but his campaign of 1976 had been all about not being from Washington, but being a Georgian,” Perry said.

While his unadorned image was popular at first, Carter staffers later regretted decisions to do away with so much presidential ceremony. In particular, former White House communications director Gerald Rafshoon lamented the decision not to play “Hail to the Chief” in Carter’s early days.