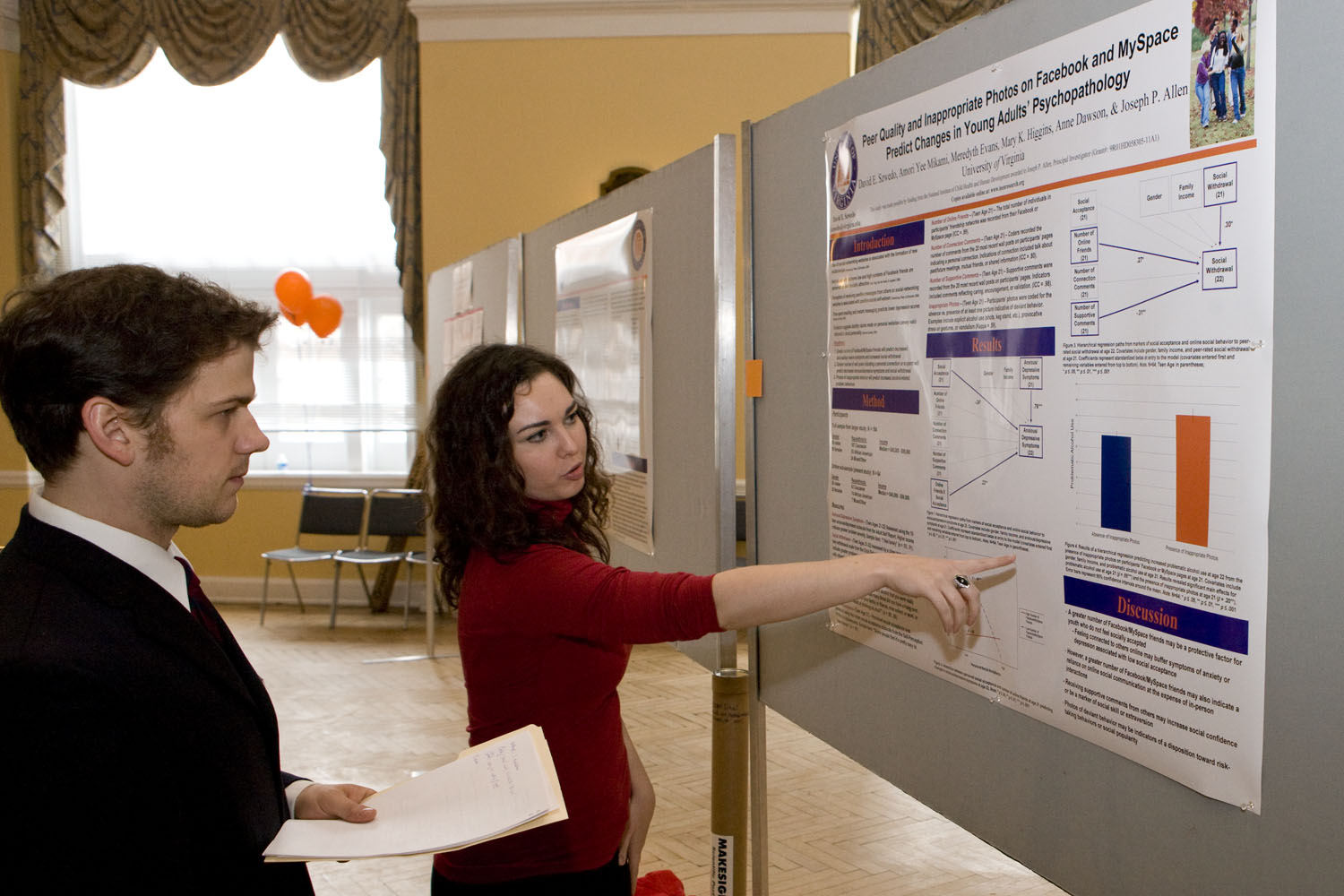 Students will present their scholarly, research and creative works to the community at Public Day. The event is Friday at OpenGrounds from 6 to 8 p.m.

Before the time of formal graduation exercises at the University of Virginia, faculty and students gathered with the public to learn the results of final exams and hear accomplished students present their research to the community.

As the University grew, Public Day fell from favor and was replaced with a traditional graduation ceremony.

More than a century later, everything old is new again. Public Day is returning as an opportunity to recognize students’ scholarly, research and creative works, while fostering a relationship with the community.

The modern Public Day is the successor to the Presidential Research Poster Competition, which U.Va. President Teresa A. Sullivan initiated three years ago. As posters are generally a product of traditional research activities, Sullivan sought to create a more inclusive event that highlights accomplishments in all academic fields.

“This revival is really the initiative of Terry Sullivan,” said Bill Sherman, founding director of OpenGrounds. In collaboration with student leaders and the offices of the Vice President for Research and the Executive Vice President and Provost, the OpenGrounds studio will host the pilot event Friday from 6 to 8 p.m.

“We don’t want people to think that research is just an engineering and science endeavor. We wanted to make sure to cover the large breadth of scholarship, research and creative work,” said Archie Holmes, vice provost for educational innovation and interdisciplinary studies.

The transition away from a competition event allows students to present work that has already succeeded in the classroom and in academic competitions. Deans, schools and departments nominated students who have put together exemplary scholarly, research and creative work.

“We’re not asking people to do anything different than what they’ve already done,” Holmes said. “We’re just highlighting what is already happening on Grounds during the academic year.”

He added that he hopes the event will not only reward excellent students, but will also motivate their peers.

“My interest in doing this is to showcase the opportunities that students have at U.Va. to get engaged in the scholarly and creative works of the University,” Holmes said. “We’re showcasing what is possible. We’re hoping if students come, they will be energized to say ‘I would like to try what that person is doing.’”

Additionally, Public Day hopes to dispel the myth that research is only for high-achieving upperclassmen. “The idea that you have to wait until late in your academic career, that is completely false,” Holmes said.

The Center for Undergraduate Excellence launched the Undergraduate Student Opportunities for Academic Research program, or USOAR, in 2013 in part to dispel this myth. The program connects rising second- and third-year students with faculty mentors across the University. “We’re getting students into research and creative works in their first or second year on Grounds,” Holmes said.

Public Day also aims to foster an ongoing relationship between U.Va. and the community, something Thomas Jefferson envisioned, Sherman said.

“The role of the University in the commonwealth, in the nation and globally depends on the sharing of what we really do as a university with the public,” he said. “At the University of Virginia, teaching is not separate from the research, it is not simply passing knowledge on from one generation to the next – it’s about faculty and students working together to advance human knowledge. That’s where the real value of a university lies.

“It’s our job to share that with the public and to be more proactive in helping the public understand what we do.”

Tom Skalak, U.Va.’s vice president for research, agreed. “As a public university, we embrace our mission of creating new knowledge for the public good,” he said. “Public Day engages the community by presenting the latest achievements by the diverse student scholars, artist and innovators at U.Va.”

Friday’s event, held in conjunction with Founder’s Day, will feature 13 presentations by undergraduate and graduate students. Attendees can expect scientific research to be intermixed with musical performances and humanities discoveries.

“The fact that Public Day features a wide range of students, from first-years through Ph.D.s, highlights the opportunities available along your academic trajectory,” said Lindsey Hepler, program manager at OpenGrounds.

While the presentations will be enlightening for attendees, they also will be a learning experience for the presenters.

“It’s very easy for us who do research to talk to our own research folks,” Holmes said. “It’s a different skillset to be able to tell other people how their work is relevant. This is one way for students to get a chance to present their work to a public audience, which is a very important skill.”

Public Day organizers have plans to expand in the future. While this year’s nomination process was closed, their goal is to bring Public Day back to its roots by providing students with opportunities to honor their peers.

“As we think about expansion, it would be lovely if this could be student-driven and facilitated by [educators],” Holmes said.

“This is a pilot with the goal of scaling up. Who knows where it will be five years from now, but hopefully it will be a major public event at the University,” Sherman said.

Exhibits on display April 14-18 at OpenGronds:

The Bigger Picture: Starry Night in the Rotunda END_OF_DOCUMENT_TOKEN_TO_BE_REPLACED