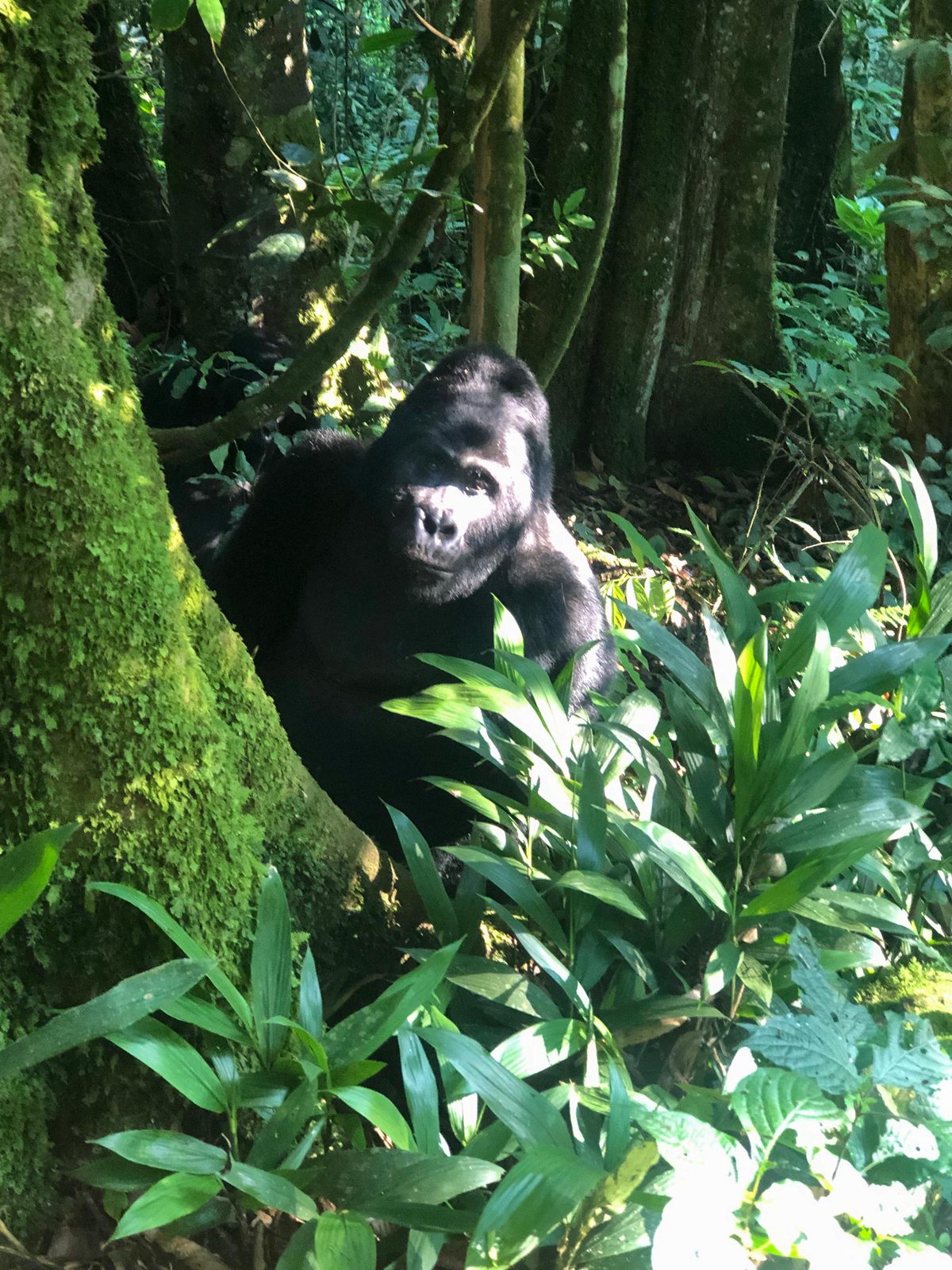 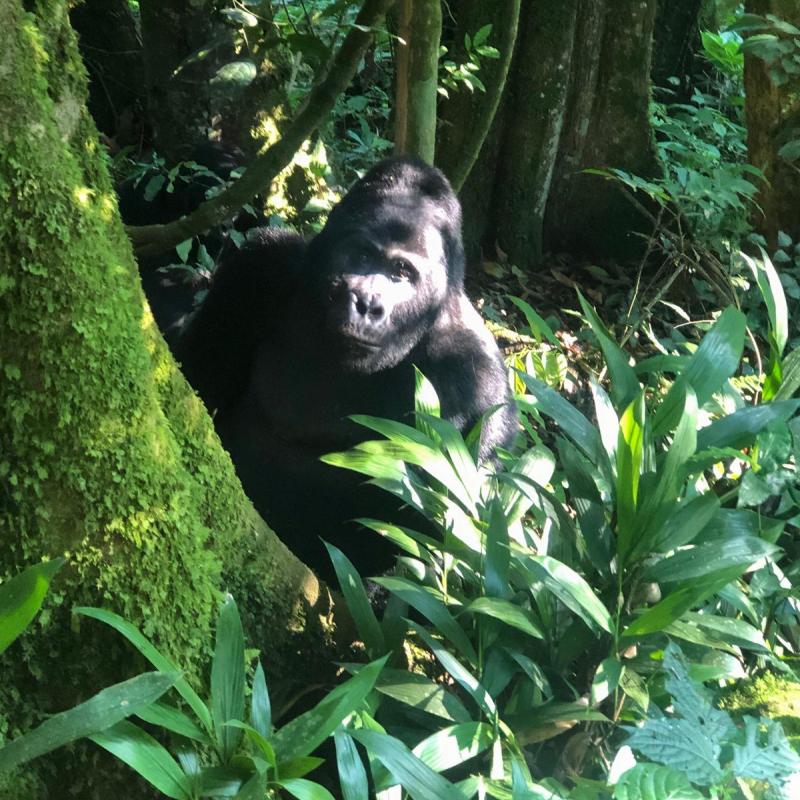 Grace Brown is exploring the connection between coffee and gorillas.

Brown, a third-year University of Virginia student majoring in history and American studies (with a minor in social entrepreneurship), spent a month this summer in Uganda working with coffee farmers in the village of Buhoma and monitoring the health of a nearby gorilla population. As an entrepreneur, she is also trying to broker a deal with a Ugandan coffee co-op to simultaneously draw more attention to the gorillas’ plight and put more money in Ugandan farmers’ pockets.

For years, the coffee farmers entered the nearby Bwindi Impenetrable National Park – home to about 400 mountain gorillas, or approximately half the world’s population – to hunt and gather firewood to survive, because they were not making enough money on their coffee. The mountain gorillas also left the forest to scavenge coffee berries on the plantations. This cross-contact raised health problems for the gorillas, as humans can transmit parasites to mountain gorilla populations. 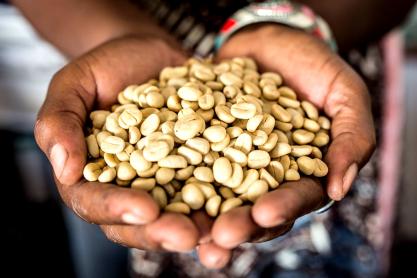 Brown, who reached out to Kalema-Zikusoka to propose her research project, interviewed local coffee farmers about specific sustainable farming methods being implemented by Gorilla Conservation Coffee, and also tracked human parasites in gorillas by studying Conservation Through Public Health’s records.

Brown said her research fits well into Kalema-Zikusoka’s “One Health” concept, which Brown described as “an all-encompassing framework.” 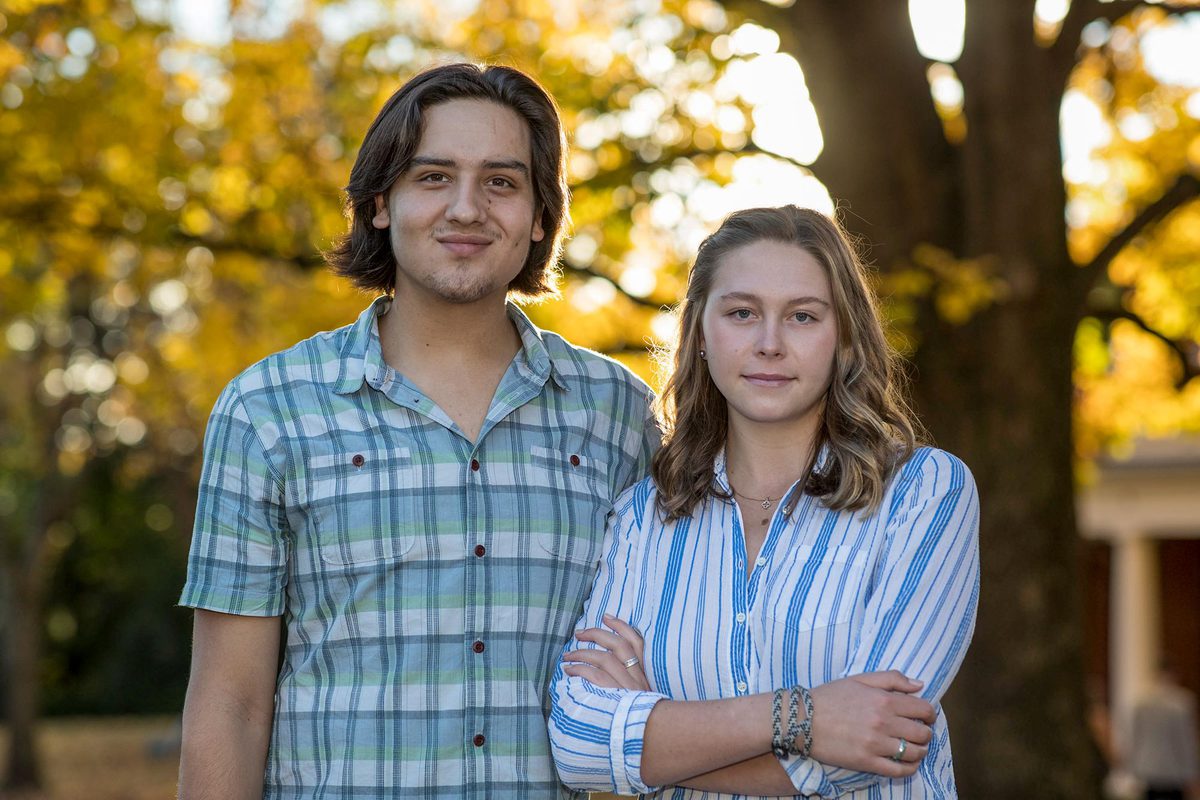 “It is built off the idea that the health of local communities will ultimately affect the health of animal populations living within the parks,” Brown said. “Instead of just solely focusing on cultivation, we need to be focusing on sanitary work in communities, health education, family planning and things of that nature.

“I really wanted to make an impact by understanding how a social enterprise, such as a sustainable coffee farming co-operative, is actually affecting gorilla health.”

Brown and Szucs performed a retrospective analysis of parasites in gorilla groups that have become habituated to humans in the Bwindi Impenetrable National Park. Conservation Through Public Health staff have monitored parasites in gorilla fecal samples since around 2005. Brown and Szucs pored over these records, focusing on the period from 2008 to 2018, five years on either side of the formation of Gorilla Conservation Coffee, which was founded in 2013 in an effort to reduce human incursion into the park.

They found that instances of two of three key parasites were reduced in the gorilla population after the coffee co-op formed. They also collected and tested contemporary samples themselves.

“The reduction in the parasites means that there is less negative human contact,” Brown said. “The particular parasites we were looking at are only transferrable from human to gorilla. They cannot originate from any other primate or animal in the park. They are specifically transferred through human fecal matter; from livestock, which also act as carriers of human parasites; or contaminated water.

“Sometimes farms use human feces as a form of fertilizer, which have the possibility of parasitic infection, so if gorillas come down from the forest and eat the coffee berries, it is very plausible they are also coming in contact with the infected fertilizer.”

The reduction in parasite load is important because human parasite and disease transmission can sometimes be fatal to gorillas.

“There was a scabies outbreak in the 1990s, which had never been seen before in any gorilla population,” Brown said, referring to a skin condition spread by microscopic mites. “That was a huge red flag that somehow human populations were negatively affecting the health of gorillas. Two gorillas died from this and the rest were treated in time, but the other affected gorillas suffered loss of hair, problems with fertility, issues such as that.”

Kalema-Zikusoka founded Conservation Through Public Health soon after the scabies outbreak in an effort to foster a partnership between the local communities and gorilla conservation. The organization educates villagers on gorilla health and conservation, while also acknowledging the important role they all play in the survival of mountain gorillas as a species. The group later formed the coffee co-op to increase the income of the coffee farmers so they would rely less on the forest and stay out of it.

“Before farmers joined this co-op, they were having a lot of issues with sustaining themselves, their livelihoods, their families,” Brown said. “They were having to enter the park illegally for bushmeat, to access firewood and other additional resources. Many of the co-op members we interviewed were reformed poachers.

“However, with new, sustainable methods of coffee cultivation and growth of the Bwindi co-op, they have been provided with more opportunities to sustain themselves and no longer have to enter the park, which positively impacts the health of gorilla populations.”

While farmers now have fewer reasons to enter the park, the gorillas still come out to take the coffee berries, from which coffee beans are extracted. To prevent this, the Ugandan Wildlife Authority and Conservation Through Public Health have trained people to effectively and humanely drive the gorillas from the plantations. Also, some of the plantations have begun planting a tea crop along their borders with the park as a buffer, since gorillas are indifferent to tea.

In an effort to continue limiting the direct and indirect contact between humans and gorillas, Brown is exploring ways of promoting Gorilla Conservation Coffee in the United States. Brown’s entrepreneurial side sees coffee sales as a way of providing Ugandan farmers a larger American market for their coffee, with the added benefit of promoting the gorillas’ plight. Uganda is the world’s ninth-largest exporter of coffee, though most of its output goes to Europe.

“I am hoping to have Dr. Gladys come and speak at the University about how conservation and social entrepreneurship work together in a lot of ways,” Brown said. “Coffee was the most direct way to have an impact on those communities and gorilla health.”

To Brown, social entrepreneurship is a business rooted in a socially conscious mission while still being commercially competitive.

“I don’t want this to just be about improving gorilla health and the local community sustenance, but also about creating a connection between UVA, the Charlottesville community and the Ugandan coffee farmers,” Brown said.

Mary Bruce, a social entrepreneurship professor who taught Brown at the Frank Batten School of Leadership and Public Policy, said Brown has a mission to have a positive impact on the world.

“She builds projects that relate to the tangible needs within her community and throughout the world,” Bruce wrote in an e-mail. “With a passion for environmental economics, conservation finance and public health, I believe Grace’s projects and research will ultimately shape those landscapes. Grace stays true to her passions, especially environmental economics and ethics, and sees the importance of global conservation/finance and how these two worlds collide.”

Bruce said Brown’s creativity, sincerity and fortitude inspire her, as an educator, to support Brown in her work.

“Grace is extremely approachable and truly listens to other students’ opinions,” Bruce wrote.  “Even when her own ideas were challenged, she thoughtfully listened and considered, building a dialogue and rapport with classmates and exemplifying a humility in learning from all those around her.”

While Brown has an entrepreneurial interest in coffee, the gorillas are still a primary motivator. She first wrote about gorillas for a fifth-grade presentation.

“It has been my lifelong dream to see gorillas in the wild,” she said. “I have always done research projects around members of the acting conservation community, like Jane Goodall and Dr. Gladys.”

Brown satisfied her dream of seeing the gorillas in their habitat after walking for several hours through the forest with tracking teams from the Ugandan Wildlife Authority.

“It was so special, because we weren’t with the tourists.” Brown said. “We were with the tracking teams, and thus we were the first group out in the morning. It was incredible and the silverback was literally two feet away from us. The wildlife teams have a standard that you are supposed to maintain 21 feet of distance between you and any gorilla. But if the gorillas enter that space on their own, that’s OK.”

Brown was not afraid of being near the silverback gorilla.

“I felt completely at peace,” Brown said. “I sat down and had to hold back tears. Every action I watched them make had such purpose and their movements mirrored ours so similarly. We watched the silverback inquisitively stare down at his fingernails, pick the dirt from underneath them and then hold his hand up to the light to make sure they were clean. Scenes like this really make me question how humans can so cavalierly ignore the plight of this majestic creature.”

Originally from Moraga, California, Brown said she enjoys traveling and exploring distant places. When she was at Athenian High School, she visited Tanzania and Kenya, having raised funds for the Starehe School, a sister institution to her school, in Nairobi, Kenya; while there, she also volunteered for several days at the Amani Children’s Home in Moshi, Tanzania.

She also represented her school in a global peace conference in Amman, Jordan. But after spending two months in Africa this summer, she thinks those trips just skimmed the surface.

“I wanted to have an understanding,” she said. “I didn’t want to come across as a ‘fixer.’ I really wanted to go there to contextualize how we, as humans, can work together to both better people’s lives, but also the lives of animals through similar procedures. This idea of interconnectivity is extremely essential to gorilla conservation and species preservation efforts moving forward.” 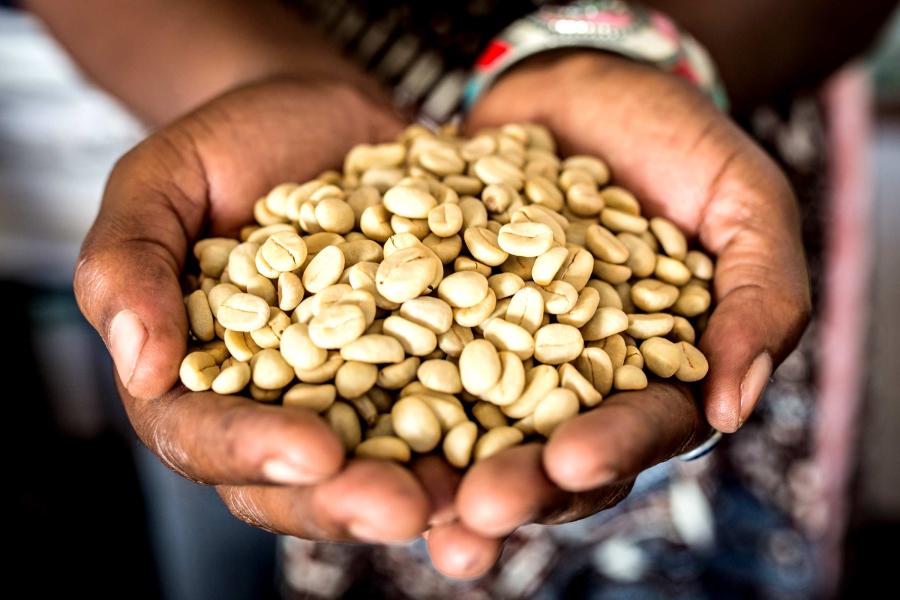 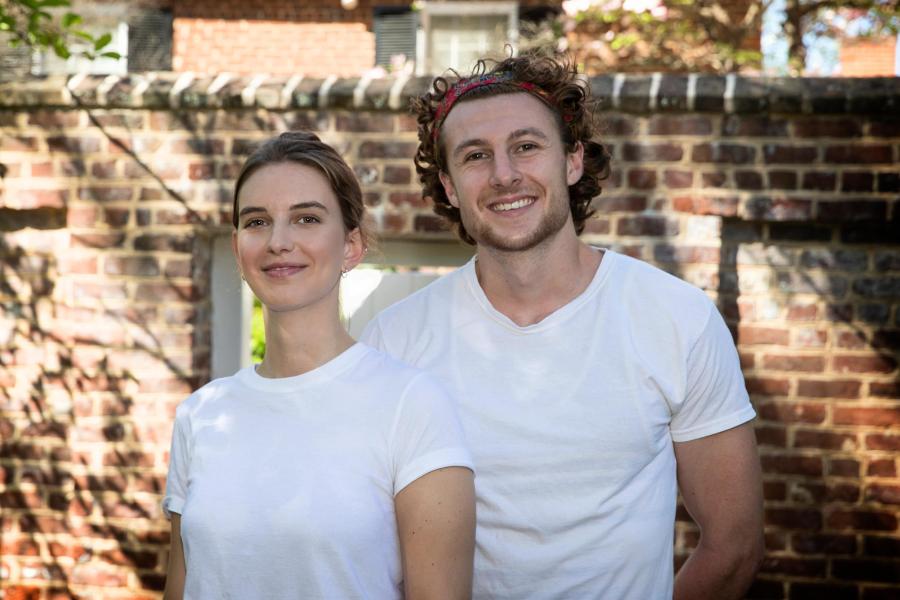 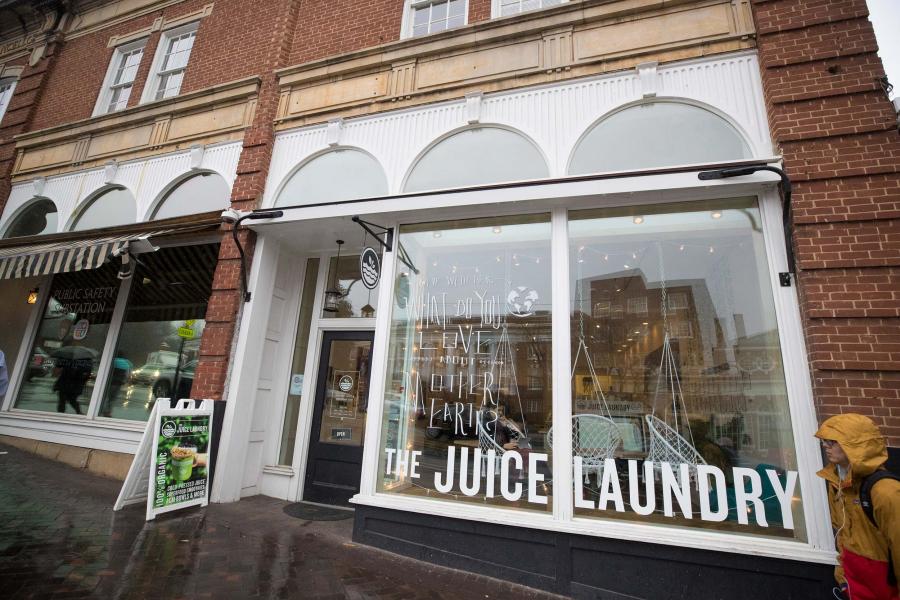 Seeking a Real-World Case Study, One Commerce Professor Turned to The Corner