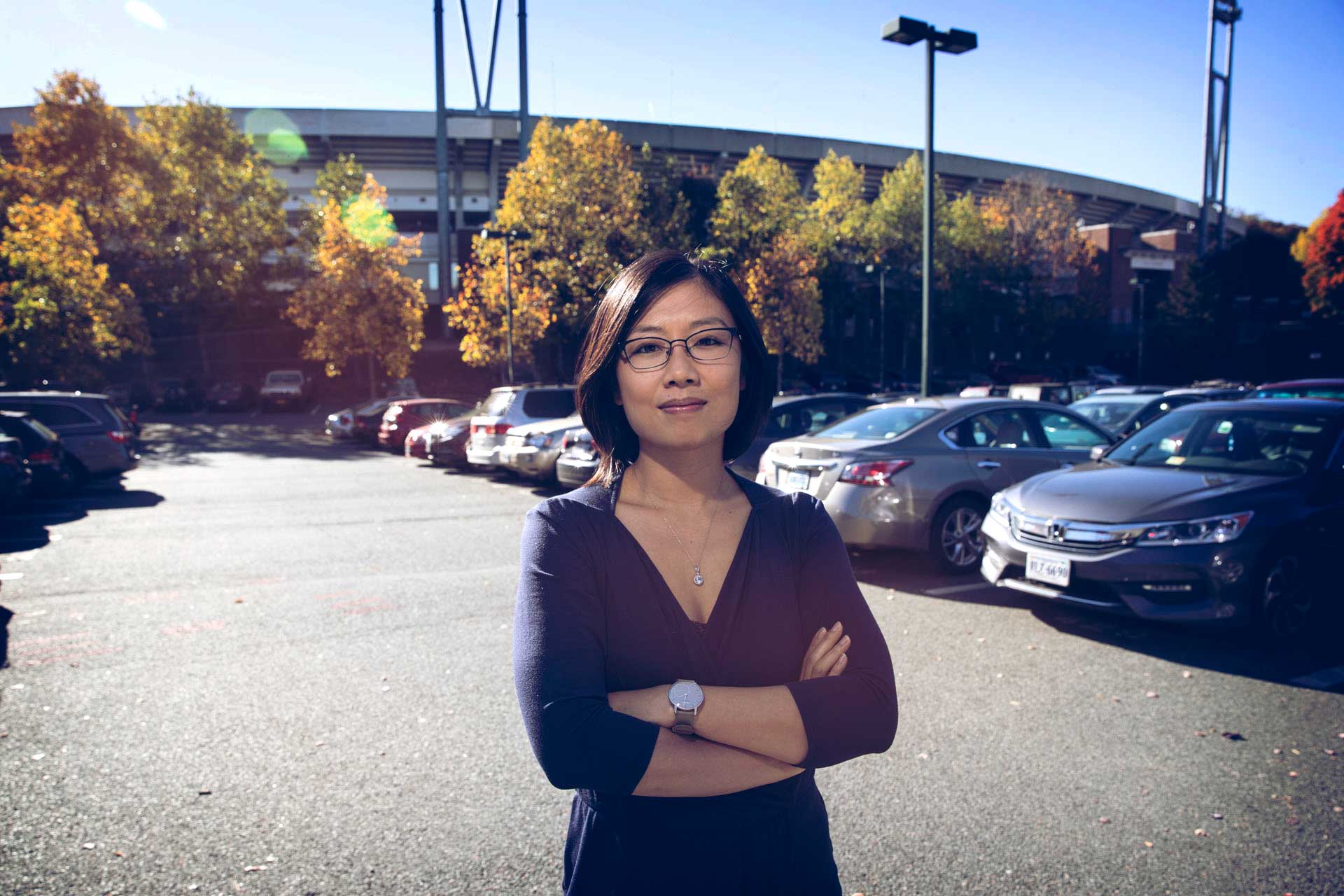 Each morning, Donna Chen, an assistant professor of civil and environmental engineering at the University of Virginia, drives her car to work at Thornton Hall. But Chen can’t help but wonder how the parking lot her car sits in until she’s ready to go home at the end of the day could be serving a better use.

Chen knows the future of transportation is shifting, and she is making sure to address that shift in both her research and the classes that she teaches on Grounds.

“I enjoy being able to use my skills to work on problems in the world that can be resolved in my lifetime,” Chen said.

Upon finishing her undergraduate degree at Texas A&M University, Chen worked for five years as a practicing civil engineer designing highways. During that time, Chen noticed some of the short-term solutions to transportation issues like congestion weren’t sustainable, and so she began working on her master’s degree at the University of Texas, Arlington in the evenings so she could do some research of her own on the topic.

“I was realizing that in our urban centers, this congestion problem was not something we could build our way out of,” she said. “I thought that maybe what I was doing in terms of designing highway expansions and new construction roadways wasn’t going to be a sustainable way to solve transportation problems forever, so I wanted to look into something else.” 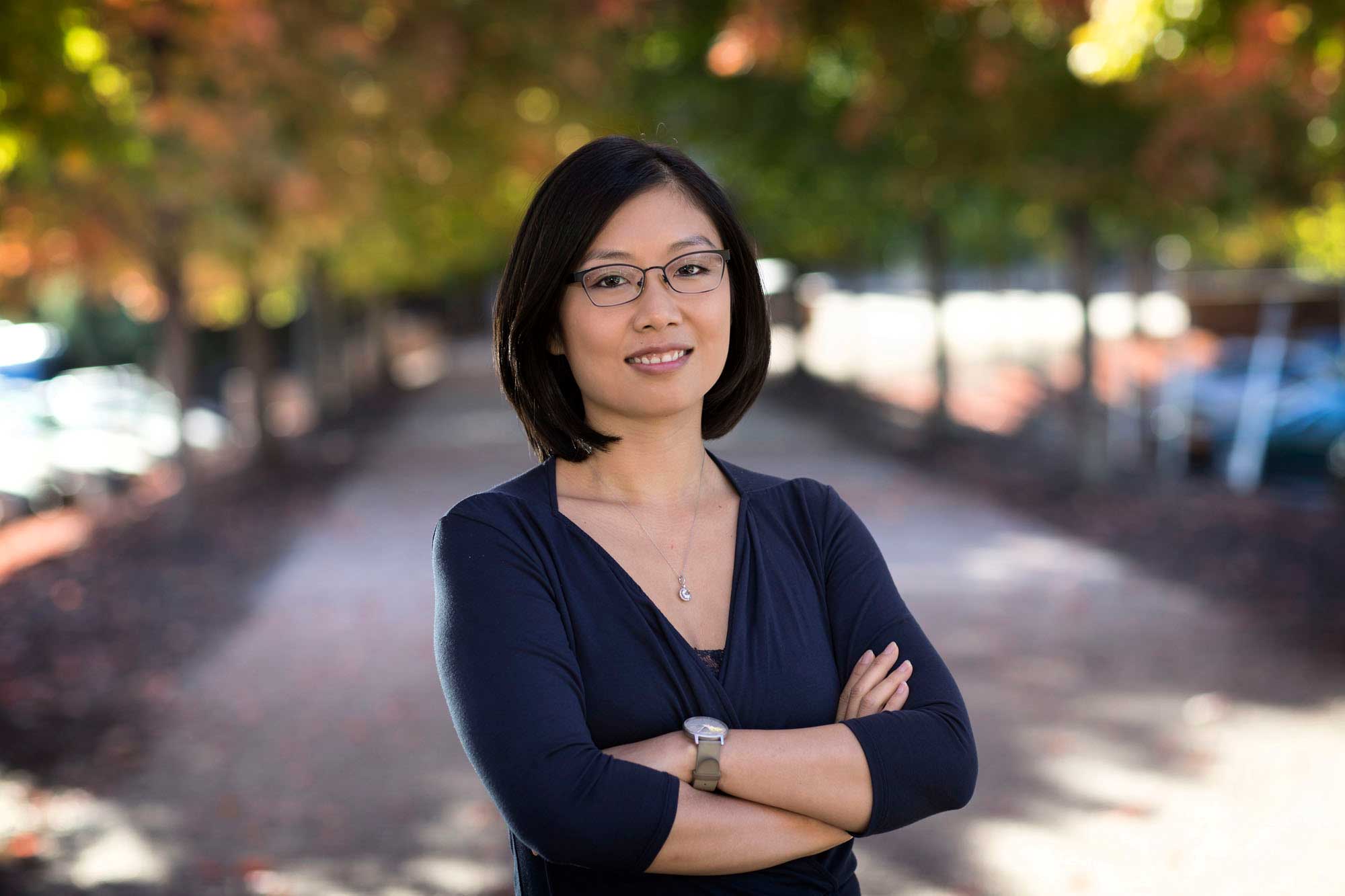 Chen went on to earn her Ph.D. from the University of Texas, Austin, made a career shift and entered academia. UVA’s collaborative nature ultimately lured Chen to Grounds.

“Dean [Craig] Benson has a vision of collaboration and interdisciplinary research that matches the vision I have for my own research portfolio,” Chen said. “UVA is a really good place to do this kind of work.”

Chen arrived on Grounds in the fall of 2015, and has since made it one of her goals to challenge a common preconception that all civil engineers do is design bridges and build roads.

“It’s true, we do still do those things, but the amount of new construction we’re doing on both of those areas is decreasing,” she said. “Now, we’re focusing on maintenance of the infrastructure we have already built, and better management and use of that existing infrastructure. We are also interested in how infrastructure relates to things beyond the physical aspects, like the effect of transportation on public health, air quality and access to activities and opportunities.”

UVA Today recently caught up with Chen to discuss the power of her research.

A. Transportation is a very fast-shifting field because there are technological and cultural trends at work.

The second trend is a societal shift; the younger generation is more open to the idea of shared economies. Along with the Airbnbs of the world, there’s a movement toward shared mobility; car sharing is becoming more common, particularly in dense urban areas. The idea that you can pick up a car that you can walk to, drive it to your destination and leave it there has proven to limit car ownership amongst younger, urban residents. We’re wondering if this trend will carry on as this generation gets older and whether or not it will become a prevalent thing in our cities.

Q. What’s the biggest issue you see in transportation?

A. People always sit in traffic and say “I hate traffic,” but they themselves contribute to traffic congestion. There’s this idea of understanding that each individual vehicle on the road causes some cost to that individual as well as everybody else on the road.

People don’t often think about getting on a road as purchasing a service, but it is. It costs the government something, and if we were to charge the drivers that appropriate amount per trip (the equivalent cost to the infrastructure provider and other travelers on the road), they might start to think about each trip being a unit of a good in a consumer demand model rather than an all-you-can-eat buffet. These are the things I try to get my students to understand very early on.

Q. How can this be addressed?

A. One direct way to address this issue is by pricing. Dynamic tolled facilities in urban areas that raise tolls during highly congested periods and decrease tolls during low-demand periods reflect this type of solution.

With self-driving vehicle technology, we can envision other solutions. In my research group, we’re trying to explore how we can encourage autonomous vehicles in a more productive fashion that resolves the urban congestion issues of today.

If we were to put these autonomous vehicles in shared-use fleets, combined with electric vehicle technology, a fleet of cars like this could significantly decrease the need for private vehicle ownership. My research shows that each of these shared vehicles can replace roughly the trip demand of anywhere from four to seven private vehicles, allowing us to greatly reduce the number of cars on the road as well as the amount of parking we have to design in order to hold all these vehicles when they’re not in use. When you add in ride-sharing on top of car-sharing, each of these vehicles can replace up to 13 privately owned vehicles.

Q. What areas of the country could most benefit from this type of service?

A. It’s kind of counterintuitive. In very densely formed areas like New York City or downtown Washington, D.C., they are already well-served by existing mass transit modes. Certainly these vehicles could still have a role because it will help resolve parking issues that are still plaguing many densely populated urban centers; however, I think the value of a system like this is where we have a transition in density.

For instance, in a place like Charlottesville, we want to offer a bus service because not everybody owns a car and we want to guarantee some kind of minimum level of mobility for all citizens, but on some routes, there’s not quite enough demand, so we only run the buses every 30 minutes. If buses only run every 30 minutes, the people who own their own cars (choice riders) are unlikely to choose transit due to the inconvenience of long waiting periods between buses. Then, you’re only capturing a very specific segment of your riders that we call captive riders: people who don’t have any other mode of transportation and, therefore, don’t have a choice. If we could offer a flexible route, flexible schedule (on-demand) ride-sharing service, we may be able to draw the choice riders out of their own cars into these shared cars, and in the long term, reduce car ownership.

Q. Are there any other measures that could alleviate the congestion problem?

A. I also do work in non-motorized, bicycle and pedestrian travel research to complement that framework of trying to reduce urban congestion. In America, those are underleveraged modes, partly because our land use is a little bit more sprawled, but also partly because we don’t have the infrastructure to allow anyone other than a very confident cyclist to think that’s something they can begin to pursue. So, I’m looking at what type of safety infrastructure pieces and policy pieces can encourage bicycling.

Q. What are the broader implications of a shared, self-driving vehicle system?

A. For one thing, it would provide greater access defined by greater mobility for all, which is what we want. For captive, low-income households that have to use the bus service, scheduling their days around the bus schedule severely limits how much they are able to accomplish in a day. In a way, access to transportation is a big factor in social mobility. If everybody had access to a reliable mode of transportation, it could greatly improve the socioeconomic outcomes and social mobility for some of these lower-bracket households.

Then there’s safety. Ubers are great, and a lot of cities are seeing decreases in drunk driving because of easier access to these types of things. So, if we had a fleet of self-driving vehicles, it would be even lower cost because the drivers would be out of the equation and we’d see increased safety and fewer instances of people driving under the influence.

Another benefit is the time savings people could achieve. People value their time. An extra five minutes spent in traffic maybe doesn’t feel like a lot in a day, but if you sum that over the course of a year, that’s quite a few hours, and that translates into significant dollar savings that people would be able to achieve by just having fewer cars on the road.

For All of Us END_OF_DOCUMENT_TOKEN_TO_BE_REPLACED