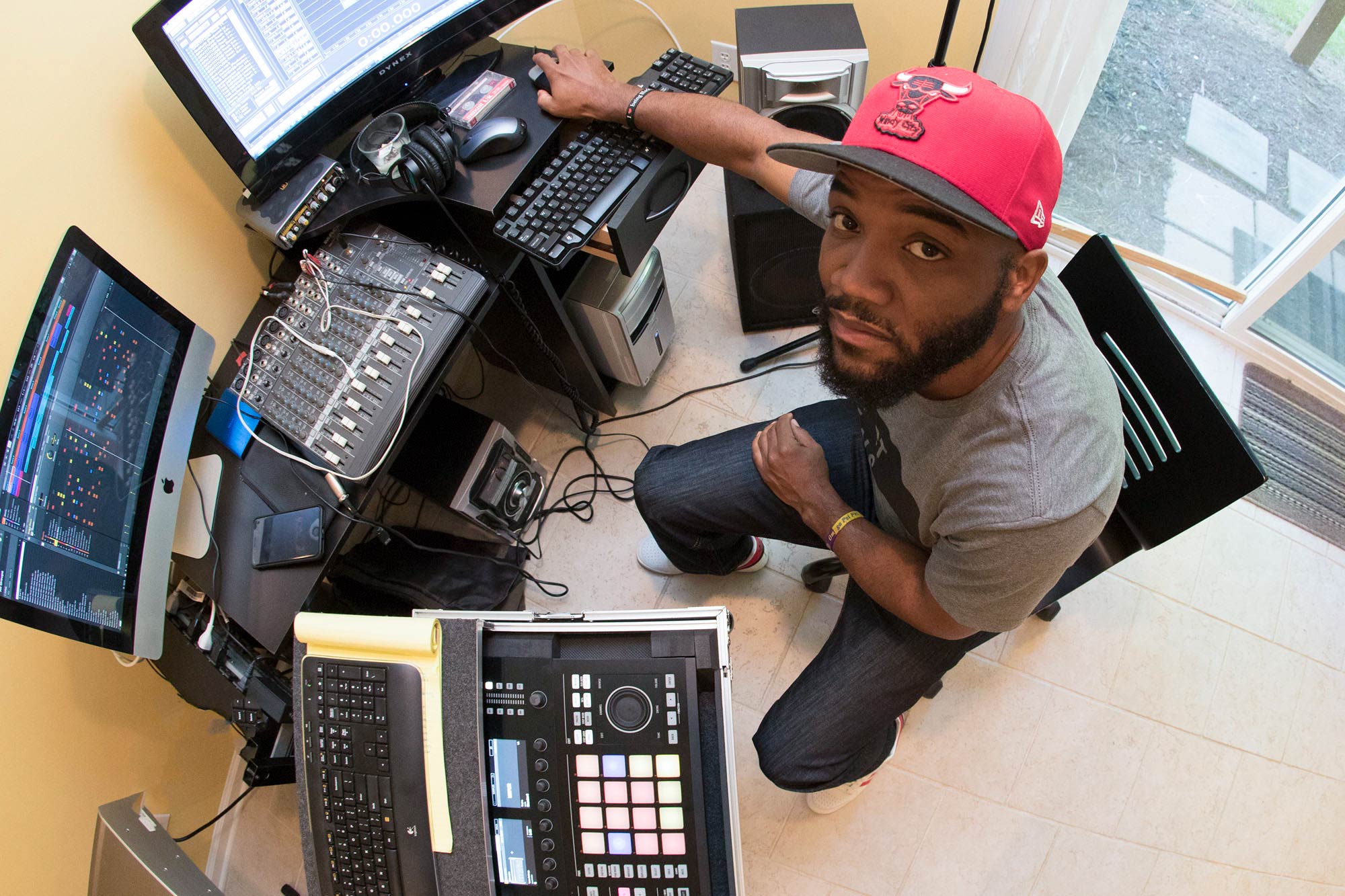 A.D. Carson joined the McIntire Department of Music as a professor of hip-hop shortly before the 2017-18 academic year. (Photo by Dan Addison, University Communications)

Two years ago, A.D. Carson came to the University of Virginia with his newly minted Ph.D. in tow. He already had a new rap album under his belt – it was also his thesis at Clemson University – and he was ready to take on his new role as a professor of hip-hop in UVA’s McIntire Department of Music.

A lot has changed since then. The University community, Carson included, endured the violence of the Aug. 11-12 “Unite the Right” rallies just weeks after Carson moved here. Carson taught his first classes that semester, teaching on both the histories of rap and hip-hop and its production.

He started a Rap Lab in New Cabell Hall classroom 398, where students in his classes, and those working on independent projects, gather to make music. Together, they have used music to take on topics ranging from the events of Aug. 11-12, racism and white supremacy, to daily events in students’ lives. 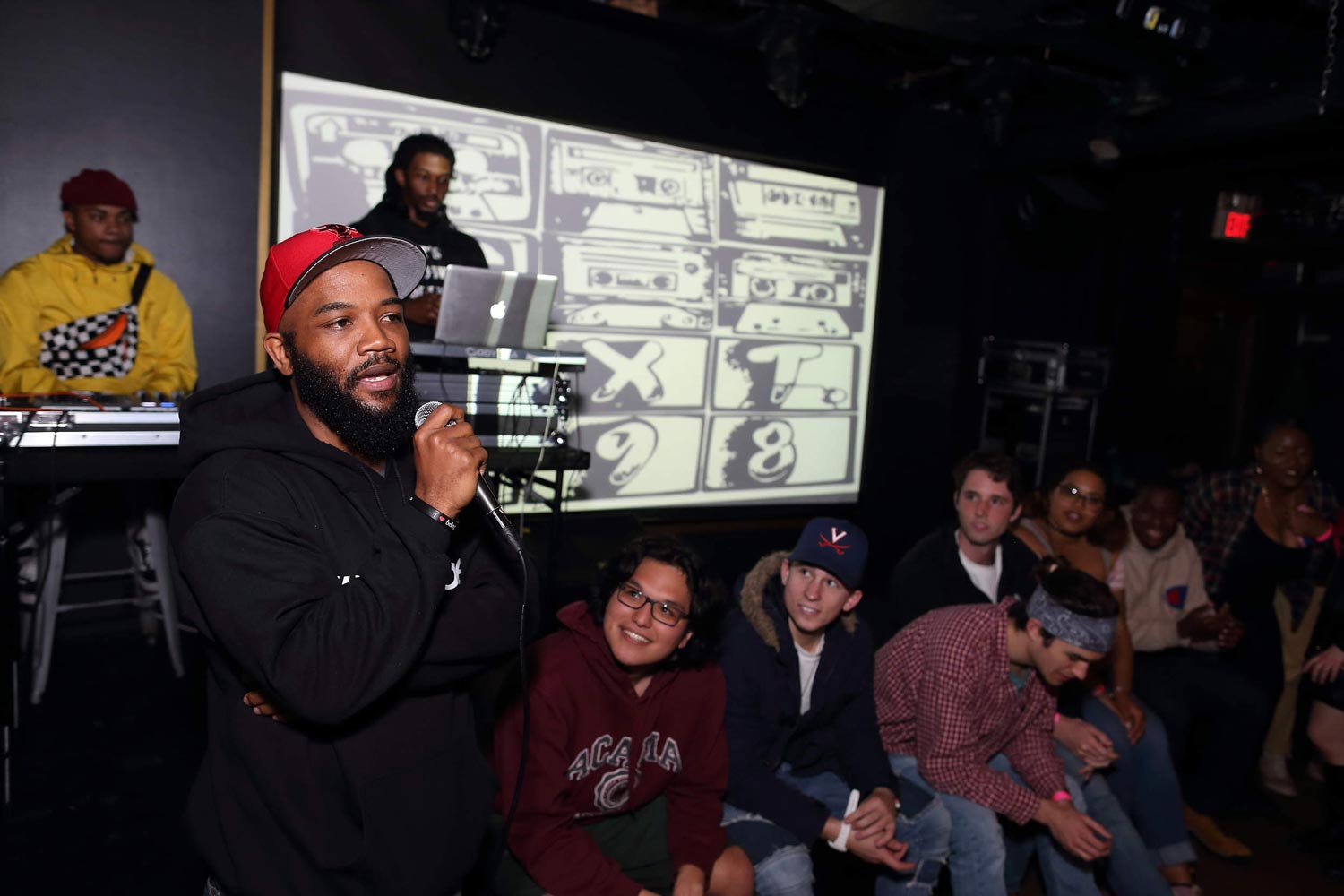 Carson with his students at a 2018 performance. (Photo by Richard Dizon, University Communications)

Carson himself has continued producing new work. This summer, he did sound design and released an original mixtape for “The Royale,” a play about an African American heavyweight boxing champion in the Jim Crow era at Charlottesville’s Live Arts theater.

He also traveled to South Africa with fellow faculty members Noel Lobley and James Igoe and several students. There, Carson and his colleagues collaborated with South African scholars, musicians and radio stations and attended and performed at the National Arts Festival in Makhanda, South Africa, one of the largest performing art festivals in the world.

He also premiered tracks from his soon-to-be-released third post-Ph.D. album, “I Used to Love to Dream.” One song, “To Mother,” is about what Carson would want to tell his mother if he is killed by police. Carson recently discussed it on a “With Good Reason” podcast, “Poetic Justice.”

We caught up with him after he returned from South Africa to learn more about the trip, his album and his plans for the new semester.

Q. What were you and your students working on in South Africa?

A. Noel [Lobley], Jim [Igoe] and I traveled there on a “3 Cavaliers” research grant, along with several students. [South African artist] Xolile [Madinda], who goes by X, visited the Rap Lab last year and runs the Black Power radio station in Makhanda, which we are thinking of as a companion maker space in South Africa to the Rap Lab here. Many of the things that they are doing, we want to do in our space. They do production and run discussion groups like we do, they also have performance space and were one of the sites of the National Arts Festival.

I did two lecture performances and a listening session for the album I am currently working on, and we had a discussion about the music and the process behind it. Two of the students who came with me, [rising fourth-year student] Lindsey Shavers and [2019 graduate] Komi Galli, both performed on the National Arts Festival program.

Q. You are nearly done with your new album, “I Used to Love to Dream.” What do you have to say in this album?

A. This album is more personal than any of the other things I have done. All of these outward statements I have tried to make in past albums, about fighting white supremacy, or solidarity, or connecting different movements, issues and places, are important. But I don’t think as much thought is given to the internal processes behind that, about your well-being or the toll it takes on you to do that work. I wanted to write an album that was actually going to showcase that, what that looks like and sounds like.

I’ve made this statement, that white supremacy must die, knowing that there are going to be people who disagree with that for whatever reasons. I have to deal with the repercussions of that. What does that feel like? This album is answering that question.

Q. Tell me about writing your song, “To Mother,” which imagines becoming the victim of a police killing.

A. I wrote that piece when I was living in South Carolina, after a young person was killed by police there. I never recorded it; I never thought I would make it public. I do a lot of private writing that deals with all I am feeling about the work I am doing.

Sharing that piece in South Africa, particularly, opened up a conversation about the same kinds of interactions there, the same feeling of waiting for this inevitable tragedy.

“There was certainly urgency after Aug. 11-12, but I think it has actually increased over time. It seems more important than ever to make this work, to ask questions, to come in and make a point and introduce some nuance to the conversation. UVA has felt like a productive space to do that, and my students have made incredible work and been very diligent and prolific in their production and discussions.”

Q. How has your time at UVA shaped your work, from your dissertation album to today?

A. I have been very fortunate over the time that I have been here to talk with a lot of people in Charlottesville and people around the world about my work. I think it has made me more attentive to whatever it is that I am making, whatever it is that I am sharing. That is why I think this new project is looking inward. I have had an opportunity to reflect on what it all means, and what responsibility might look like in this environment, from this position.

I feel urgency. The work feels more urgent than ever before, I am driven to use it for some kind of productive change. There was certainly urgency after Aug. 11-12, but I think it has actually increased over time. It seems more important than ever to make this work, to ask questions, to come in and make a point and introduce some nuance to the conversation. UVA has felt like a productive space to do that, and my students have made incredible work and been very diligent and prolific in their production and discussions.

All of that makes me feel good about the work in ways that I may not have felt when I first got here. The apprehension is not gone. The urgency is not gone. But the relationships are strong enough that I feel we can continue doing good work at the University and in the community. 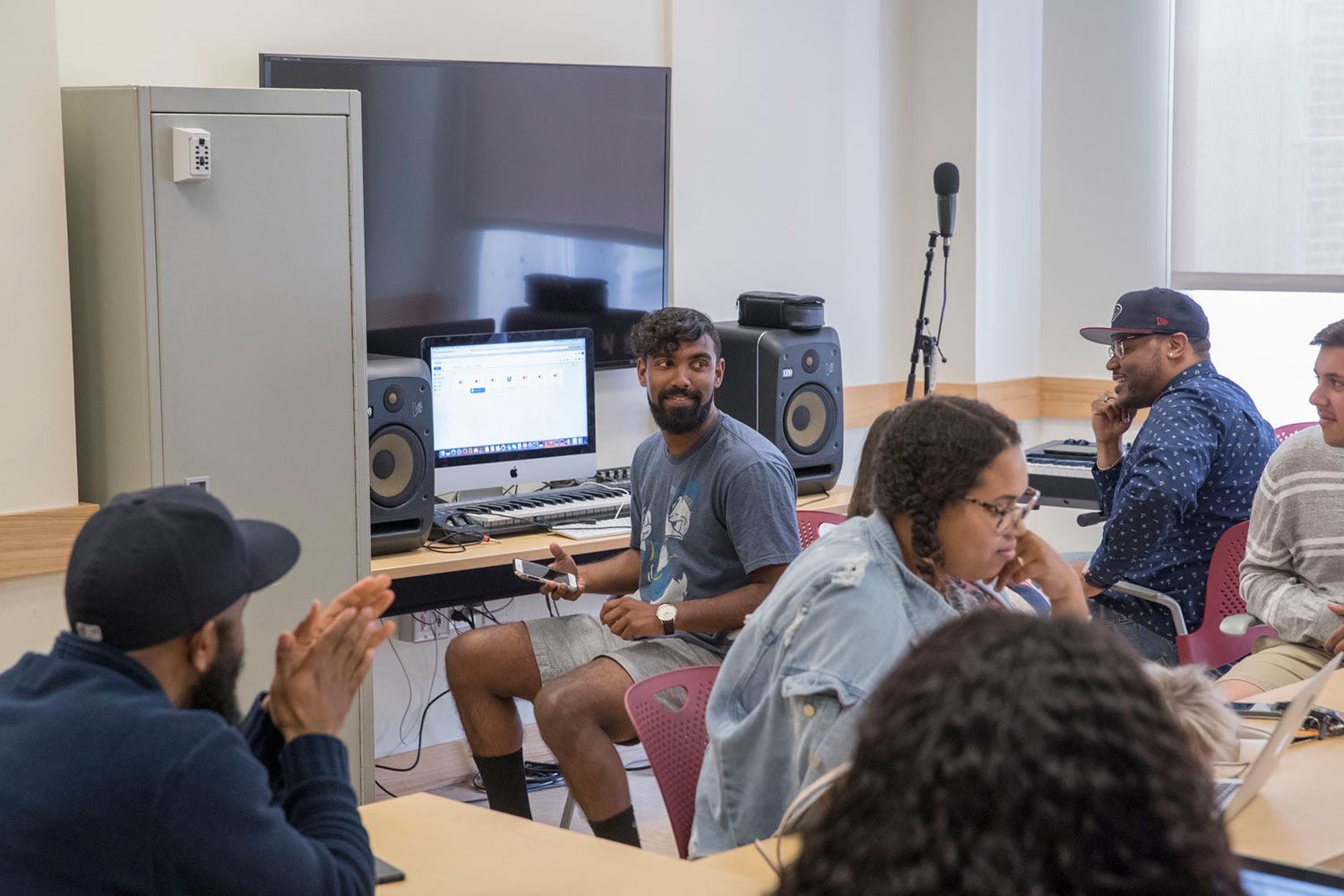 Carson has transformed New Cabell Hall classroom 398 into a “Rap Lab” with space for both production and discussion. (Photo by Dan Addison, University Communications)

Q. What can students expect in the Rap Lab this semester?

A. I am teaching two classes this semester, the Black Voice and a rap writing class called “Hip-Hop Histories and Engaged Community Storytelling Practices.” We have a new recording booth coming in soon in the Rap Lab, a mural installed [in conjunction with the Charlottesville Mural Project and UVA Arts]. We are trying to start a working library so that folks have access to reading materials that really help inspire the dialogue and collaboration.

We’ll continue have weekly open hours there for anyone to come record; we just want to get more people in there collaborating or working on individual projects. I encourage anyone who is curious to drop by, ask questions, come to listen.

What Is Biotechnology? Where Is It Headed at UVA? END_OF_DOCUMENT_TOKEN_TO_BE_REPLACED