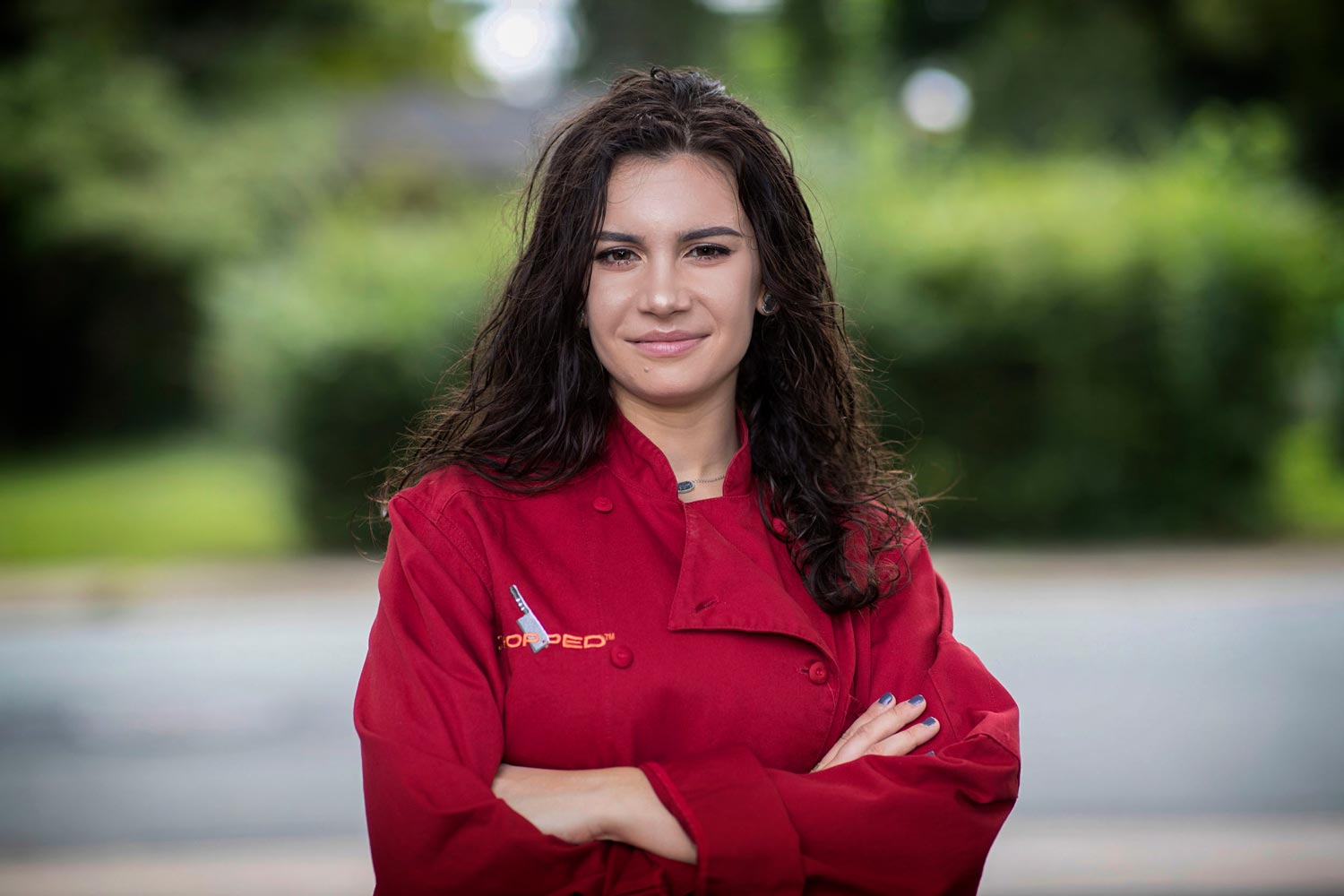 At only 15 years old, Veronica Seguin stood in front of three of the world’s top food critics, waiting to see if her dessert made of quail eggs, coconut, Shirley Temple mixture and chocolate wafer cake was on the chopping block.

In 2015, Seguin won the teen tournament in Food Network’s reality cooking show “Chopped,” in which contestants combine unlikely ingredients to create dishes for some of the world’s leading food critics.

Now a second-year student at the University of Virginia, Seguin applies the lessons she learned during the televised tournament to her roles as a student, resident adviser and actor. She’s still cooking, but now for a very different crowd: instead of a panel of judges, Seguin prepares to stand in front of her fellow students as she leads two master classes on Sept. 18 and 24 to teach them the skills she learned on the reality show.

Seguin plans to double-major in drama and marketing, finding creativity in the kitchen as well as onstage.

“My dream is to be a film actor or director; I’ve never wanted to pursue cooking professionally,” she said. “It’s something that I use as a creative outlet.”

In anticipation of her upcoming master classes, UVA Today sat down with Seguin to talk about her experience on “Chopped,” cooking and her love for theater.

Q. When did you start cooking?

A. I started cooking when I was about 4 years old with my grandma. We’d be making pastries in her kitchen and she’d give me the leftover pie crust, and I’d make cinnamon rolls out of it.

Q. How did you get involved in “Chopped”?

A. I applied for “Chopped” when I was 14 and a freshman in high school. I went through the casting process for about three months, and then a week before I was supposed to be filmed in New York, they told me I had to be available on one of the performance dates for a [play] I was in. That was the hardest decision of my life: do I want to be on “Chopped,” or do I want to be in this performance? I had to choose between the harder right and the easier wrong, so I quit the “Chopped” casting process.

Then, the summer before sophomore year, I got another call. I’m a firm believer that everything happens for a reason. In the year between me being cut and me being cast I had so much practice time to hone my skills and also recognize that I wasn’t as good as I thought I was. I went on the show again when I was a sophomore in high school and I won.

Q. What was it like being the only contestant on “Chopped” not interested in pursuing the culinary arts professionally?

A. Out of 16 contestants, I was the only kid who wasn’t destined to be in culinary school. I was just a regular old teen cook. It definitely gave me more creative liberty, because I felt like I could mess up and still have fun -- and I did mess up. I burnt a lot of dishes, and in the first five minutes of the first round I cut my finger twice.

A. Since being on “Chopped,” I don’t need to use recipes anymore. I think recipes are overrated; cooking by nature is an improvisational art. When you’re painting, you don’t need measurements of how much paint to use. You don’t want to be stuck on paint-by-numbers your whole life.

Q. Do you have any dietary restrictions?

A. I recently decided to go vegan. It’s been going really well. I’ve always loved food, and I never thought I’d even be vegetarian. I don’t think I’m going to be vegan my entire life, but for now it’s one thing I can do to reduce my carbon footprint.

Q. What is your favorite restaurant?

A. I visited my aunt and uncle in Salt Lake City and we went to the Red Iguana. It’s this homemade enchilada place, and it’s some of the best food I’ve ever had.

Q. What is your favorite place to shop for ingredients?

Q. What are some good food resources for UVA students?

A. Greens to Grounds. You get a box of local ingredients for $10 delivered right to your dorm, and can even use Plus Dollars if you want. Also, if you have a UVA meal plan there is a free dietitian included.

Q. Do you use cooking in your work as a resident adviser in first-year dorms?

Q. Do you have any advice for students who don’t cook, but would like to learn how?

A. If you don’t know how to cook and you’re really anxious about your skills in the kitchen, I definitely recommend starting to watch cooking shows.

In my master class, I’m going to be tackling common misconceptions about food. There are lots of incorrect cooking techniques that I’ve seen my friends attempt, and I’m going to combat those. Anyone can sign up.

How a Single Email Changed a Life END_OF_DOCUMENT_TOKEN_TO_BE_REPLACED

Fall Is in the Air on Grounds END_OF_DOCUMENT_TOKEN_TO_BE_REPLACED

At UVA, There Is a Club for Everyone END_OF_DOCUMENT_TOKEN_TO_BE_REPLACED