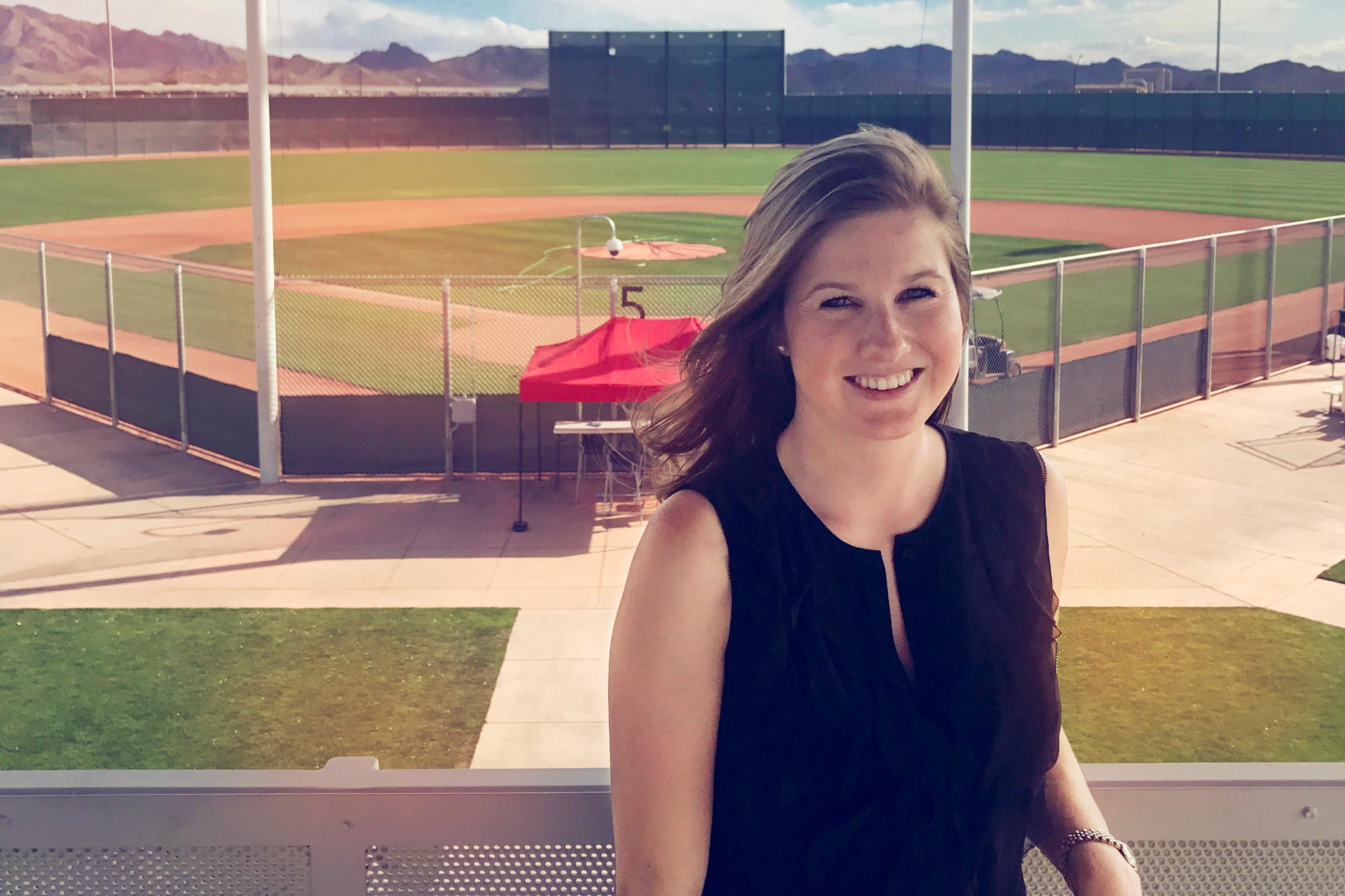 Haley Alvarez knew she wanted to make a career in baseball even before she enrolled at the University of Virginia.

Now, she is on her way to her eventual goal: becoming the first female general manager in Major League Baseball.

While at the University, the 2015 McIntire School of Commerce graduate – who was a student manager for UVA’s baseball team – completed internships in the Baseball Hall of Fame and the Office of the Commissioner. Since graduation, she has worked with three major league teams: the Oakland Athletics, the Boston Red Sox and the Cincinnati Reds, where she currently works in the front office as a baseball operations assistant.

Front office personnel in Oakland were so impressed with Alvarez’s research and analysis of their draft prospects that they decided to send her to Scout School, an annual program in Arizona that teaches the basics of baseball scouting to top employees sponsored by major league teams. She was one of two women in her class of 60 students.

UVA head coach Brian O’Connor, who worked with Alvarez during her four years as a student manager, believes she has what it takes to ascend to baseball’s top ranks.

“Haley’s work ethic and her attention to detail set a very high bar for the student managers who came after her,” O’Connor said. “She has the work ethic, she’s responsive and persistent, and she understands the game and everything that goes into it really, really well. It would not surprise me at all if she became a general manager one day.”

UVA Today caught up with Alvarez to hear more about what she has learned so far and how she will continue working toward her goal. 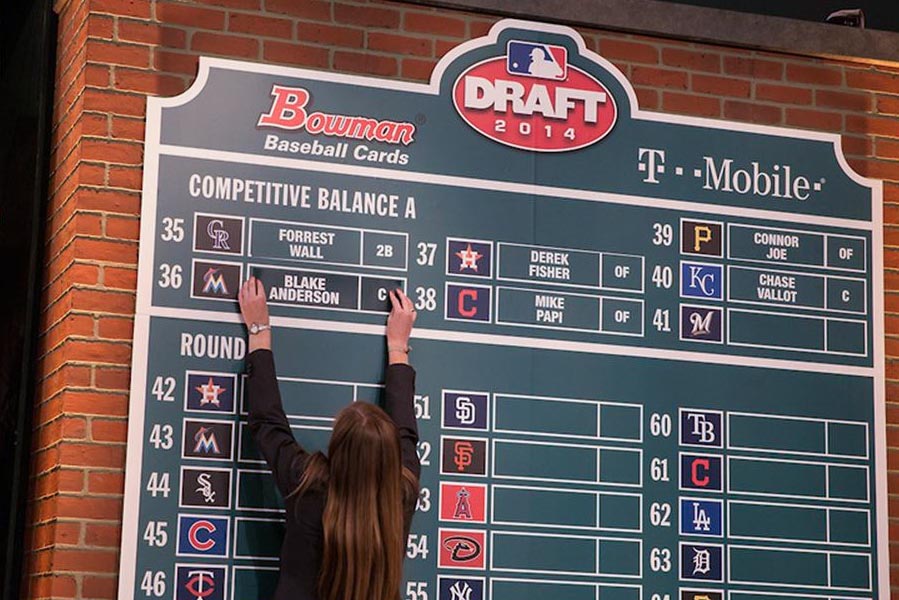 Q. Where did your love of baseball come from?

A. Growing up in San Francisco, my dad took me to many San Francisco Giants games. He taught me how to keep score when I was pretty young, and I realized that there was so much more to the game than meets the eye. When I came to college, I knew I wanted to pursue a career in sports. As my depth of understanding has increased, so has my love of the game.

Q. You were a student manager for UVA’s baseball team for four years. What was that like?

A. Coach O’Connor was so generous and really let me dive into so many different aspects of the game. I worked with TrackMan software, a statistics and analytics platform that was pretty new then, but is now used by all major league teams. Learning that software early on really gave me a leg up, and working closely with the coaches and the players was such a great experience to learn more about the game on and off the field. Coach O’Connor is still one of my mentors, and has been a great role model.

Q. Any favorite memories from your time with UVA’s team?

A. I loved being there when the team made the College World Series in 2014 and won it in 2015. Being part of a group that had worked so hard, and seeing them get as far as they did, was so special. I got a championship ring in 2015, which was definitely a highlight.

Another great memory was in the summer of 2014 when I was working with former Commissioner Bud Selig in the commissioner’s office. During the Rule 4 Draft – the draft for first-year players – I had the honor of placing players who were selected in the first and second rounds on the draft board, many of whom were UVA players I had worked with for three years. It was great to be a part of their introduction into professional baseball.

Q. What have you learned in your different roles with major league teams?

A. I have gotten experience with a lot of different levels of baseball. One summer in college, I worked with the San Rafael Pacifics, an independent minor league team in California. I did everything from ticket sales and birthday parties to helping with player contracts. In the Office of the Commissioner, I mostly worked on the First-Year Player Draft, where I helped prepare player profiles and compiled analyses of the selected players. Throughout the summer I also worked with MLB’s replay system, uniform violations and baseball rules and regulation.

Since graduation, I have worked with three major league teams and have learned a lot more about scouting and working with teams on their draft strategy. I’ve done everything from operating the radar gun behind home plate at Fenway Park to working on sport science initiatives, which use technology and data analytics to study and support players.

It’s been a very cool experience so far. I love working with amateur players, seeing them drafted and seeing how they progress.

Q. What do you enjoy about the more data-driven, scientific aspects of baseball?

A. For me, this is where my education in the Commerce School has been particularly helpful. We use data analytics to study things like how different game schedules impact players’ sleep patterns and health, or to analyze swing mechanics or how a player’s body mechanics may correlate to injuries. It’s a combination of the analytical and the personal. Ultimately, the goal is to better understand what is best for the player.

Q. You’ve said you want to be the first female general manager in Major League Baseball. How has what you learned so far helped you toward that goal, and what other skills are you hoping to gain?

A. General managers are responsible for drafting and managing the coaching staff and the players, and they have to be very knowledgeable about every area of an organization. Every new experience helps me grow and gain new skills. I am really enjoying my role right now because it allows me to interact with a lot of different people across the Reds organization, and I plan on continuing to get experience in as many areas as I can. I am currently working on developing young talent in our complex in the Dominican Republic all the way up through our system to the major leagues, as well as evaluating new talent at amateur games for the 2018 draft.

Already, I have been in three different draft rooms for three different teams, so it has been interesting and helpful to see how each team approaches that process. Baseball is a bit like a puzzle; there is no one direct path to solving it. Teams compete in different ways, and working with large, small and mid-size organizations has helped me to see that.

Ahead of Thanksgiving, Hoos Look Back With Gratitude END_OF_DOCUMENT_TOKEN_TO_BE_REPLACED

The Cavalier Marching Band Marches On – Even When Apart END_OF_DOCUMENT_TOKEN_TO_BE_REPLACED