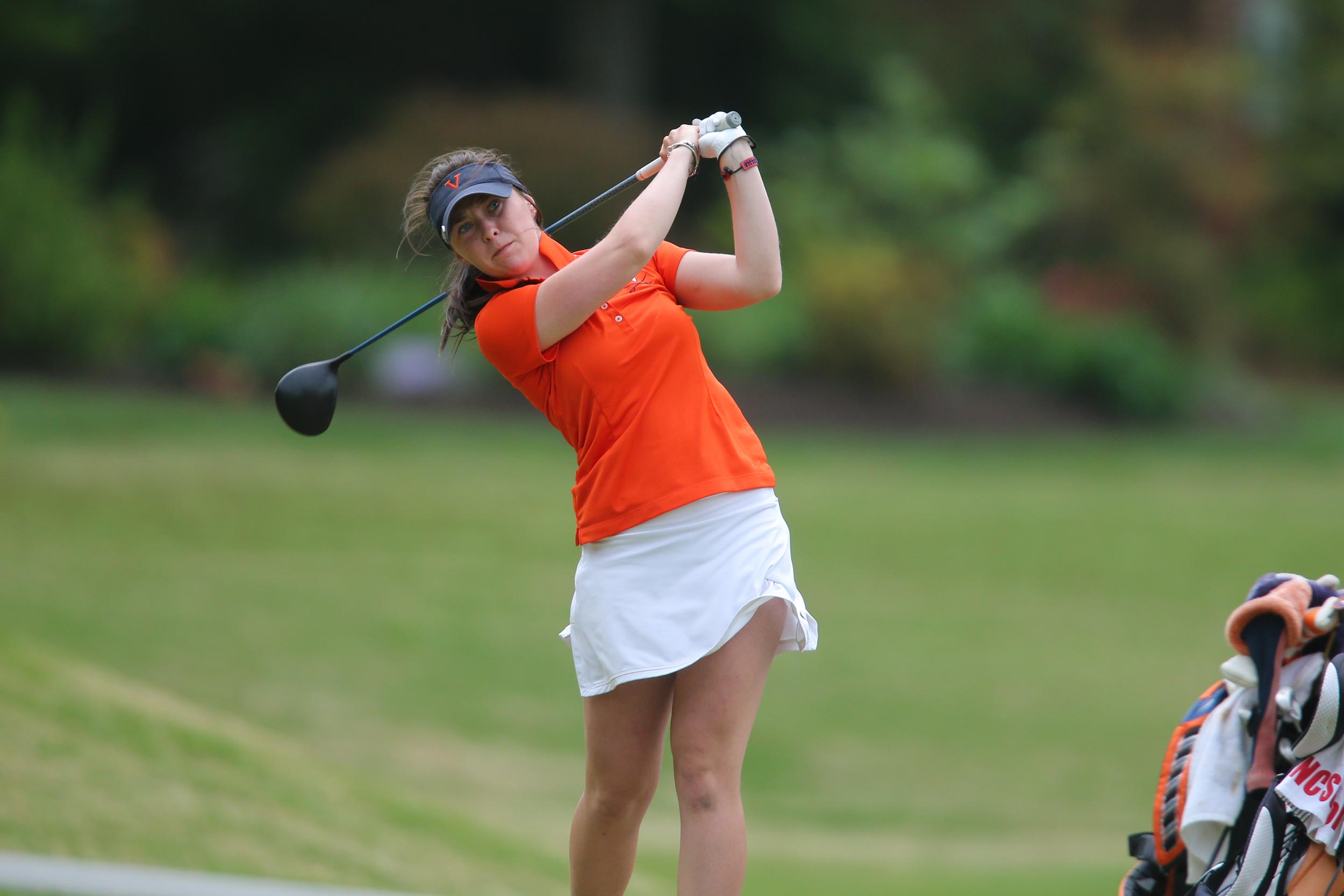 The first player in the history of the University of Virginia women’s golf program to be named first-team All-America, Brittany Altomare has enjoyed continued success as a professional.

Altomare, who graduated from UVA in 2013 with a bachelor’s degree in psychology, is in her fourth year on the LPGA Tour and has career earnings of more than $1.9 million. Late last month, she earned a spot on the 12-woman team that will represent the United States at the 16th Solheim Cup, to be played Friday through Sunday in Perthshire, Scotland.

In the biennial match-play competition – similar to the Ryder Cup for male golfers – the U.S. is bidding for a third straight victory over Europe.

Altomare, who grew up in Shrewsbury, Massachusetts, was a four-time All-Atlantic Coast Conference selection at UVA, where she played for head coach Kim Lewellen. After earning All-America honorable mention as a freshman, Altomare was a second-team All-American in 2011 and 2012 and a first-team selection in 2013, when she won the individual ACC title.

After graduating from UVA, Altomare spent two years on the Symetra Tour, the LPGA’s official developmental tour. On the LPGA Tour, she has recorded eight top-10 finishes. The most recent came last month at the Cambia Portland Classic in Oregon, where Altomare placed third and earned $86,881.

Altomare, now based in Tampa, Florida, is the latest former UVA student-athlete to be featured in a VirginiaSports.com series on student-athlete alumni. The highlights of our conversation follow.

A. It’s been great. It’s been a dream of mine for a long time to play on tour and compete out here, and that’s what I’m doing, so I’m doing something that I love, and I’m very lucky to have made a career out of it.

Q. Not only are you competing on the LPGA Tour, you’re performing well. What does that feel like?

A. For sure. The last couple years especially I’ve put myself into contention a few times, and it’s been great. I feel like I’ve been getting more and more comfortable every time I have done that, which is a good feeling. Hopefully I can keep putting myself in good positions.

Q. What did it mean for you to clinch a place on the Solheim Cup team?

I feel like I’ve been able to do that pretty well this year, and it’s led to a few good finishes, which helped me secure my spot on the Solheim Cup team, so that was pretty special.

Q. Will this be your first trip to Scotland?

A. I’ve been a few times. I’ve played the Scottish Open twice.

Q. When you look back on your college golf career, what sticks out to you?

A. I feel like UVA is a second home to me, and I loved playing under Coach Kim. She was great. She really helped me grow as a person and as a golfer and helped me mature in my golf game, because she had some tour experience. I think she played on the Symetra tour and the European tour, which really helped, and she treated us like adults. She gave us freedom to schedule our practices and do what we needed to do to be ready, and I thought that was super-helpful, because it’s basically what we do out here.

A. I’ve talked to her through email a few times, but when I was [in Charlottesville recently] I didn’t get to see her. But I got to see the new building [the Dean Family Performance Center at Birdwood Golf Course], so that was really cool. It’s incredible. Those girls are very lucky.

Q. UVA placed 14th at last season’s NCAA Championships and consistently ranks among the ACC’s top programs. How much pride do you take in knowing you helped lay the foundation for this success?

A. It’s cool. I think I was in Coach Kim’s first recruiting class, and we had a lot of success while she was there. But it’s been really fun to follow and watch the girls do really well and play really well. It’s weird now, because I don’t think I’ve played with any [of the current Cavaliers], so that makes me feel very old. But I still really enjoy following the girls.

Q. How has your UVA experience helped you as a pro golfer?

A. Just being a student-athlete in general and being able to manage my time, I think, has really been useful out here. Between the travel and things that you’re required to do, and pro-ams and practice and also workouts, and then also giving yourself time to rest and relax so that you’re refreshed when you tee it up, the time-management part of it has really helped me.

Q. What’s been the most challenging part of life on the tour?

A. The hardest part right now for me, I think, is also the best part about it: the travel. We get to see so many cool places and countries, especially on the LPGA Tour. Last year I think we went to 14 different countries. It’s great, but it’s also a lot of travel, and you don’t see that on the PGA Tour. They play most of their schedule in the States, and they have a few abroad, where we’re playing in 14 different countries.

I think that’s the best part about our tour, but it’s also the hardest, being able to adapt to where you are and being away from home.

Earlier this year I was in Australia – I think it’s about a 14-, 15-hour time difference – and then the next week we were playing in Singapore. That was like a nine-hour difference from Australia, and the next week we were in Thailand, which was another couple hours. You just have to be really adaptable and really manage your time, but it’s also the greatest part about it. I’ve seen some pretty amazing things.

Q. Who takes care of your travel arrangements?

Q. Are there any LPGA events that let you play near your family in New England?

A. Right now, the closest we get is our tournament in New Jersey. I do not get back home that often, but I try and get back at least once a year, sometimes twice a year.

Q. Do you keep up with your former UVA teammates and coaches?

A. I was actually back in Charlottesville for Elizabeth Brightwell’s wedding this summer. [Richmond head coach and former UVA assistant] Calle Nielson was there, too, so it was great to see her.

We all try to keep in touch. It’s sad, because everybody’s all over the place, but that’s exciting, too.

Q. Did you follow the Hoos’ run to the NCAA basketball title last season?

A. Yes, I did, and one of my really good friends out here went to Texas Tech, so that was an interesting final game, but I was happy UVA won.

Q. The course of Birdwood has been redesigned and is being renovated. Are you looking forward to testing it when the course re-opens?

A Year We Will Never Forget: 2019-20 in Review END_OF_DOCUMENT_TOKEN_TO_BE_REPLACED

‘What Will You Carry With You?’ Remarks From UVA President Jim Ryan END_OF_DOCUMENT_TOKEN_TO_BE_REPLACED