Q&A: Astronomer Rages Against the Dying of the Night 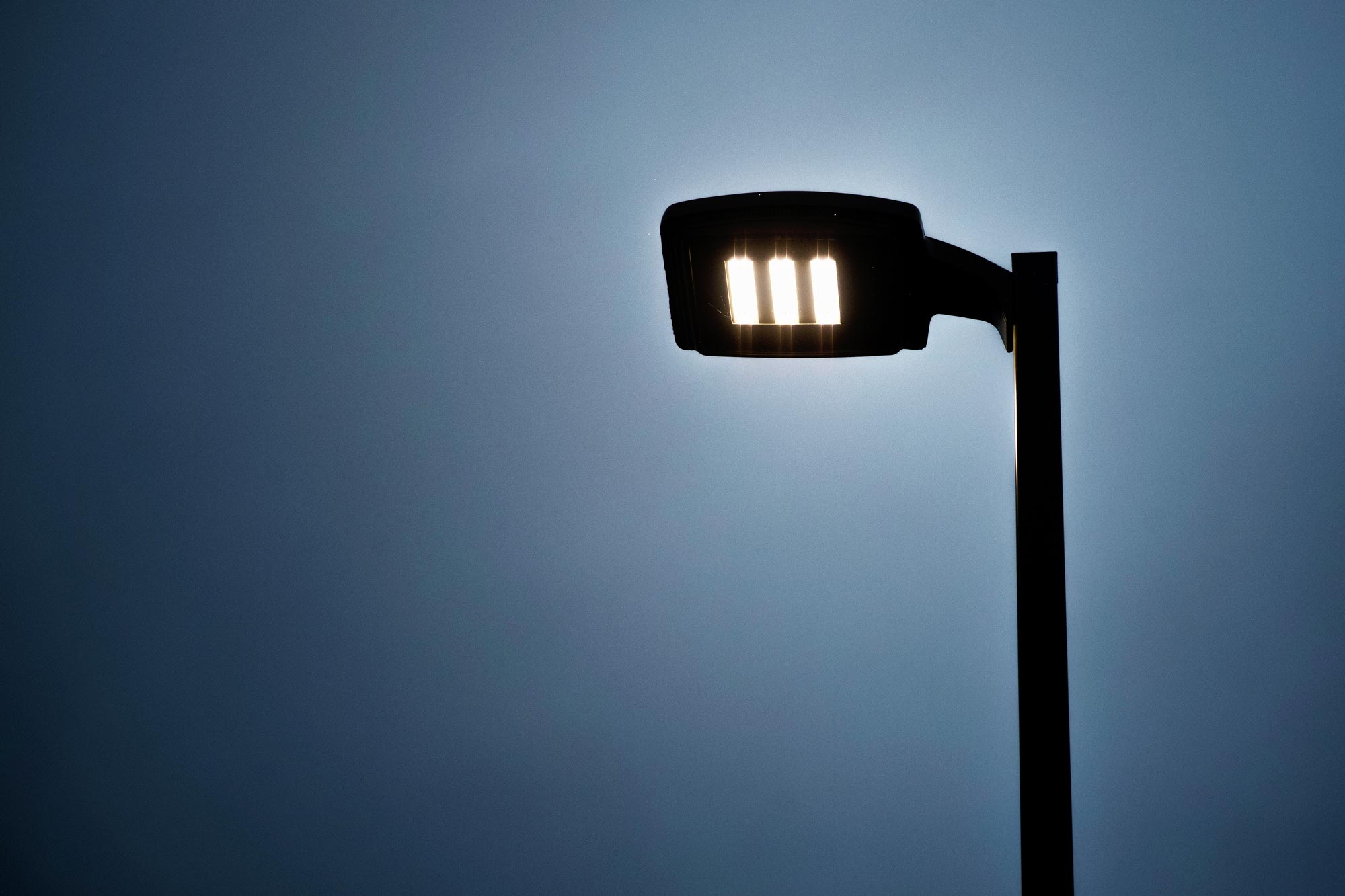 As cities, suburbs and even the countryside worldwide become more brightly lit at night, many people, from astronomers to environmentalists to everyday citizens who just love a view of the night sky, are seeking ways to light the night less brightly.

University of Virginia astronomer Ricky Patterson is among them. Recently he discussed the subject at a meeting of the Sierra Club at Charlottesville’s central library.

Here, he shares his thoughts for readers of UVA Today.

A. Light pollution is ineffective night lighting that causes an undesirable effect. There are three main types: light trespass, caused by streetlights, porch lights and other sources that shines directly onto or into a neighboring building or yard; glare, caused by a light shining directly into the eyes of an observer, such as from an approaching car; and skyglow, caused by light from any source on Earth that scatters up into the atmosphere, reducing visibility of the night sky. 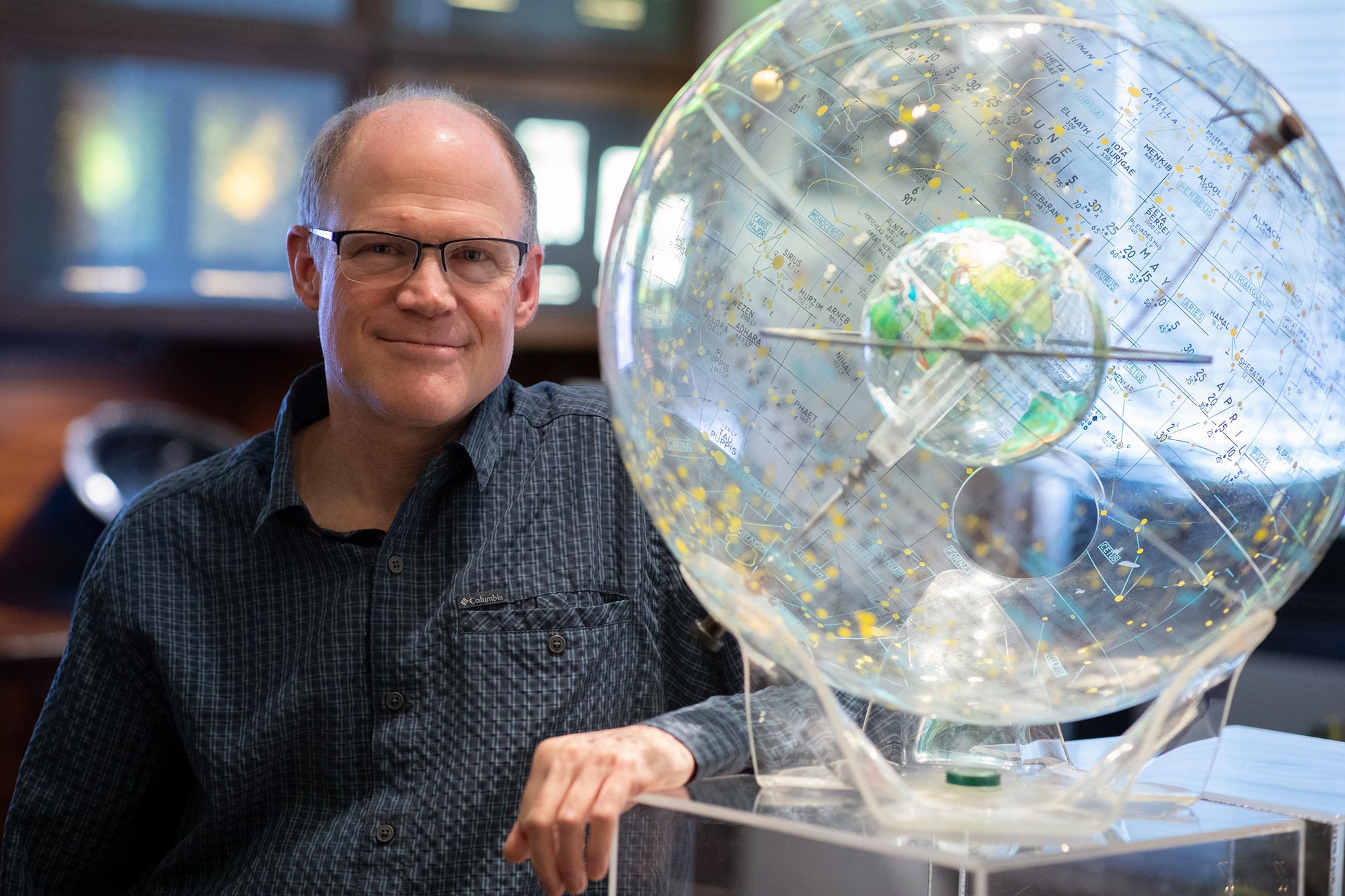 A. Bluish-white light, emitted from many LEDs, is a particularly bad color for nighttime lighting, but is very commonly used because of its energy efficiency. It suppresses our secretion of the hormone melatonin, disrupting sleep cycles. Blue light also scatters up into the atmosphere and then reflects off of moisture and dust in the air more strongly than other colors of light, scattering back down as skyglow. This really reduces our ability to see the night sky, including the Milky Way, which has been part of our story throughout human history up until just the past handful of decades.

Fortunately, modified LEDs that emit “warmer” yellowish light are now available and are much better for our eyes and sleep cycles.

Glare is a safety issue affecting our night vision as we navigate the nighttime landscape. Lights shining directly into our eyes will temporarily dazzle us, making it difficult, if not impossible, to see other objects. As we age, the problem worsens, as our eyes need more time to adapt to changing light conditions.

More subtle impacts from light pollution include disruption of sleep cycles. We’ve all evolved to take our cue for when to be active and when to rest from the rising and setting of the sun, and by the seasons. This natural clock is disrupted by the presence of significant amounts of artificial light long after sunset and throughout the year.

A. By using artificial light to extend the apparent length of day, we disrupt annual cycles for plants to bud and lose their leaves, for birds to migrate and animals to mate. Too much light in a given place also attracts or repels various prey and predator creatures. For instance, insects are attracted to lights, while bats, a major nocturnal insect predator, avoid over-lit areas.

One of the best-known effects is that of hatching sea turtles that instinctively head toward the brightest area in order to find the protection of the ocean. This serves them well in unpopulated areas, but with the introduction of artificial light on beaches, the hatchlings become confused and most won’t make it to the ocean unaided.

Not only the timing of bird migrations is affected; migrating birds are also attracted to and confused by artificial light along their journeys. Hundreds of thousands of birds are killed each night by collisions with lit office buildings.

A. Unfortunately, the worst instances of light pollution tend to occur in the centers of cities, and in other areas with high population densities, often in areas perceived as low-income. The problem is made worse because people in these areas usually don’t have a voice in decisions when exterior lighting plans are implemented. Historical stigmatizing of low-income neighborhoods often leads those in power to calling for extreme over-lighting as a misguided way to achieve a sense of safety for others.

Q. Why is light pollution an issue for you personally?

A. I’ve lived in Charlottesville for 40 years, including 20 years next to McCormick Observatory. During this time, I have seen the number of nights I can see the Milky Way dwindle to just a handful – usually limited to cold, clear nights without any sporting events occurring. Growing up 50 years ago outside of Pensacola, Florida, and in semi-rural Virginia Beach, I had access to a much darker sky, and was drawn to a career in astronomy.

I find it sad that we are all losing the constellations and the beauty of the Milky Way. Fewer of us have the opportunity to connect to the natural world in the way that we all once could, as we struggle to make out the night sky from our backyards, or even McCormick Observatory. Now I have to travel to the Southwest of the U.S., or to the Andes of South America, or the Outback of Australia, to get as close as I can to the night sky that was available to nearly everyone in 1900. And how much longer will even those outposts – available only to a privileged few – remain relatively pristine? The skyglow from a city can be seen more than 100 miles away. What we do here impacts our neighbors.

Q. What can governments and individuals do to improve outdoor lighting?

A. Individuals can do a few things. First, look at your own lighting. Are any of your lights “unshielded?” (Does any light from the fixture go “up” above the level of the fixture itself?). Are your lights shining into your neighbors’ windows or putting out glare?

One small step everyone can take is to put outdoor lights on motion sensors. This helps to improve safety, but also significantly decreases the amount of light and energy being wasted throughout the night.

Another step is to put any ornamental or decorative lights on a timer, so they turn off a couple of hours after sunset.

Finally, take a look to see if you have too much light for the area you are trying to illuminate. Even the best shielded lights can be a problem if they are too bright, as the light scatters off the ground and back up into the sky.

Individuals can also work to help local governments pass and update sensible outdoor lighting ordinances. We need to work with business owners and government bodies to come up with guidelines for effective lighting, such as ordinances that limit the brightness of unshielded lights, and setting maximum illumination levels based on the extent of development in a given area. And an ordinance that addresses the particularly destructive impact of blue-white LEDs is needed, as LEDs take over our night landscape.

It’s Copperhead Season in Virginia. Here Is What You Need to Know END_OF_DOCUMENT_TOKEN_TO_BE_REPLACED

What’s Next for UVA’s Class of 2022? END_OF_DOCUMENT_TOKEN_TO_BE_REPLACED