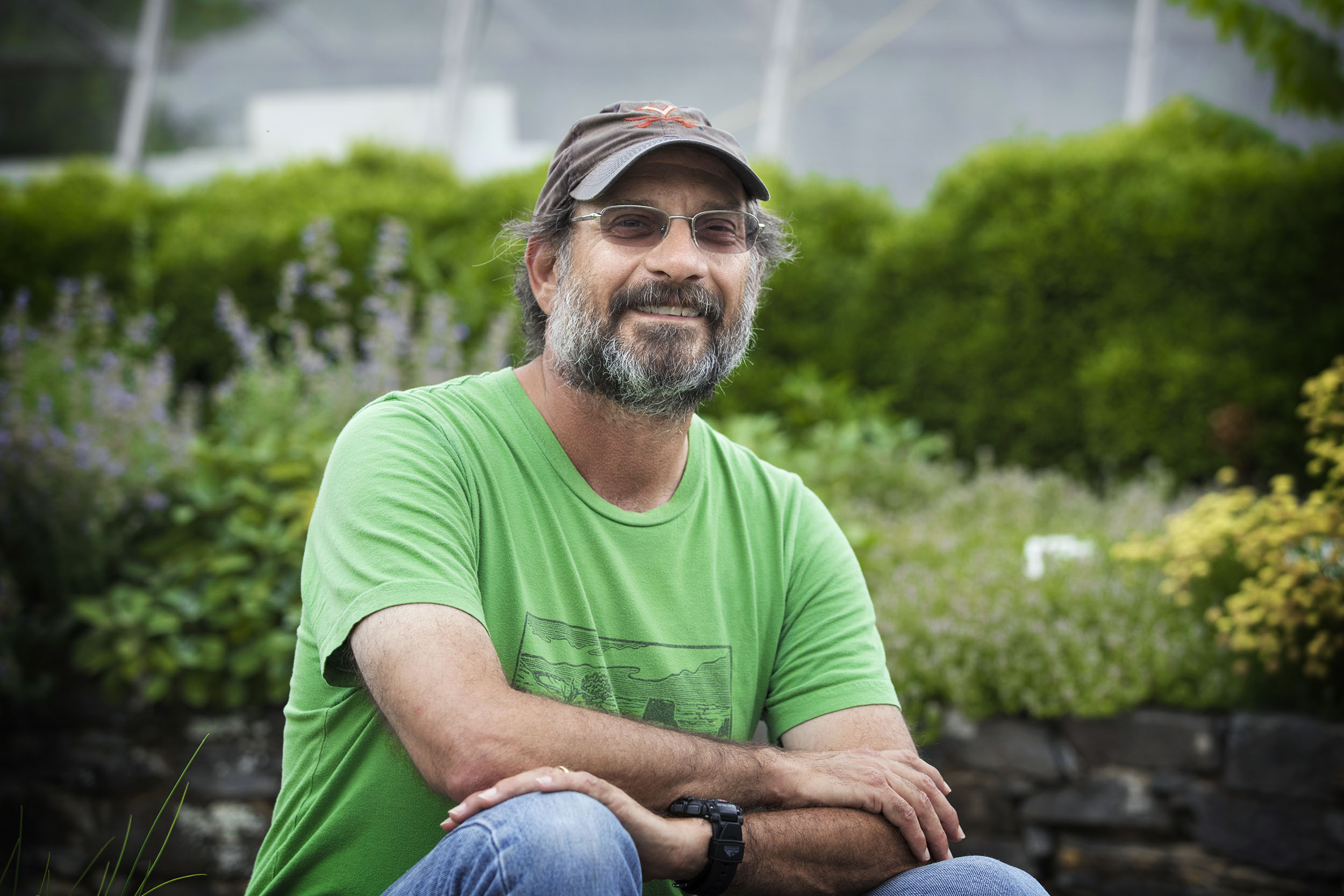 According to recent news reports, stressed-out, homebound people have been flocking to birdwatching for stress relief during the pandemic. Birdseed is flying off the shelves!

But David Carr, a University of Virginia professor of environmental sciences, didn’t need a pandemic to get into “birding.” He has been observing and casually studying the creatures since the 1970s, when he was a high school student in northern Kentucky.

Carr directs UVA’s Blandy Experimental Farm, a research, education and public outreach facility in Clarke County, at the top of the Shenandoah Valley. There, he has plenty of terrain to tromp – more than 700 acres – where he can search for birds and observe their behavior. That’s what he does alongside everything else he does with his colleagues and staff – overseeing research and conservations projects, working with graduate and undergraduate students, running public outreach programs, and conducting his own research into plant and insect interactions. 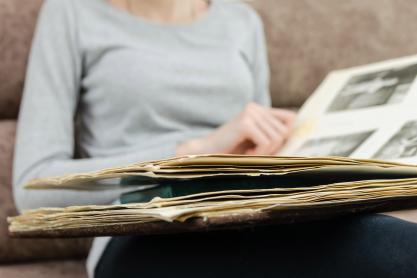 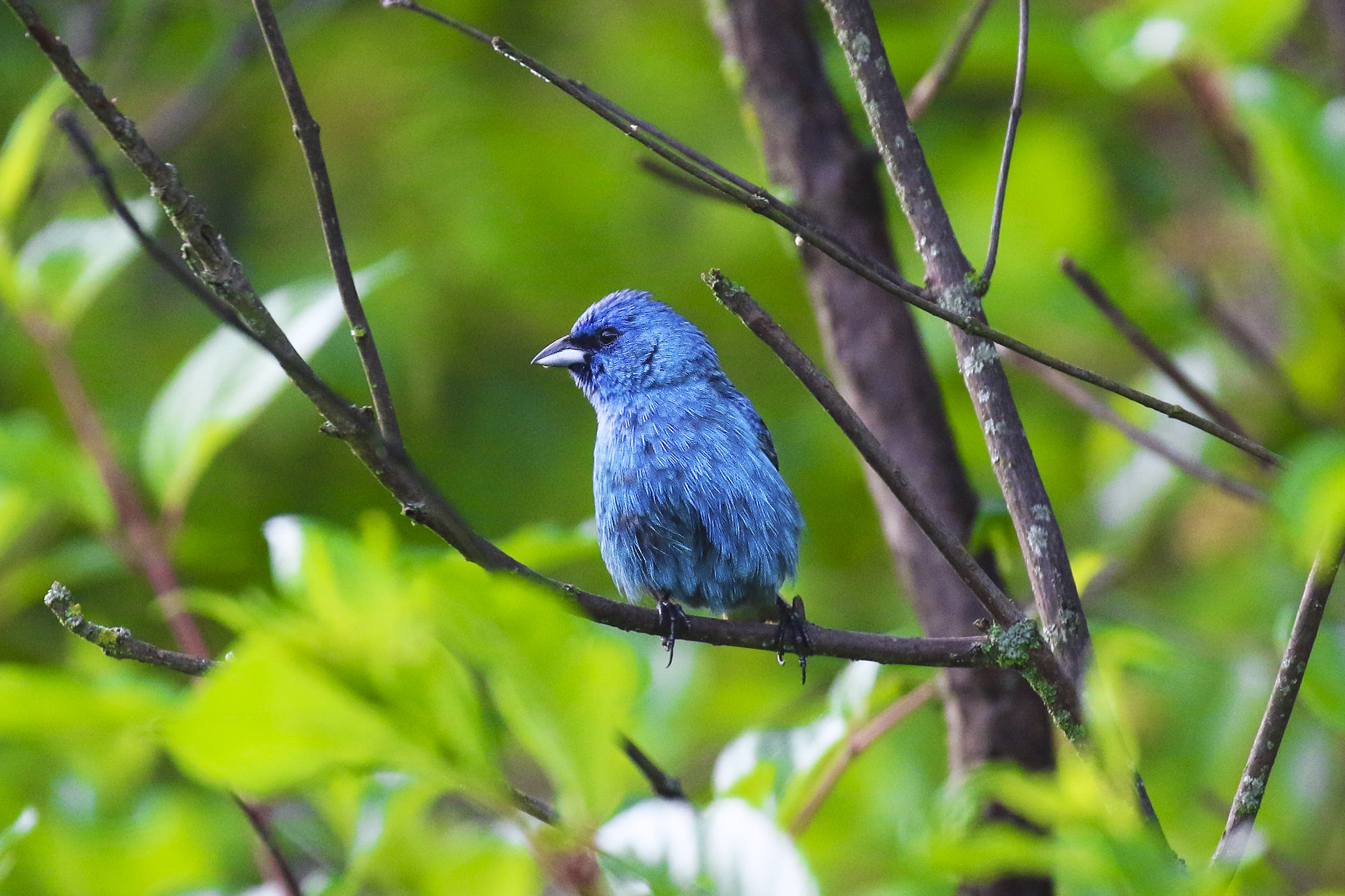 Indigo bunting, a neotropical songbird that migrates to Virginia. “This is a common bird in open, shrubby habitats at Blandy, where I photographed it this summer,” Carr said.

Carr holds a Ph.D. in zoology, but, despite his love of birds, he didn’t become an ornithologist.

“Birds are actually kind of hard to study – they move around a lot,” he said.

But that’s OK, he’s willing to go to them.

“I’ve gone birding all over North America, from the Bering Strait to the Everglades, and a few other countries too,” he said. “My wife and I like to take trips to national parks, and we often meet up with friends from grad school to watch birds at different locations.”

Travel as he may, Carr really doesn’t have to go far to see many of the bird species found in the eastern United States. He finds them at Blandy, where he has recorded 214 species during his 23 years as director, with “more yet to see.”

He often photographs the ones he does see. He started several years ago with a good point-and-shoot camera. He got some pretty good shots with it, but envied the work of professional bird photographers. Then, a couple of years ago, he bought a Canon single-lens reflex camera with a 100mm-400mm zoom lens. His photography got a lot better. 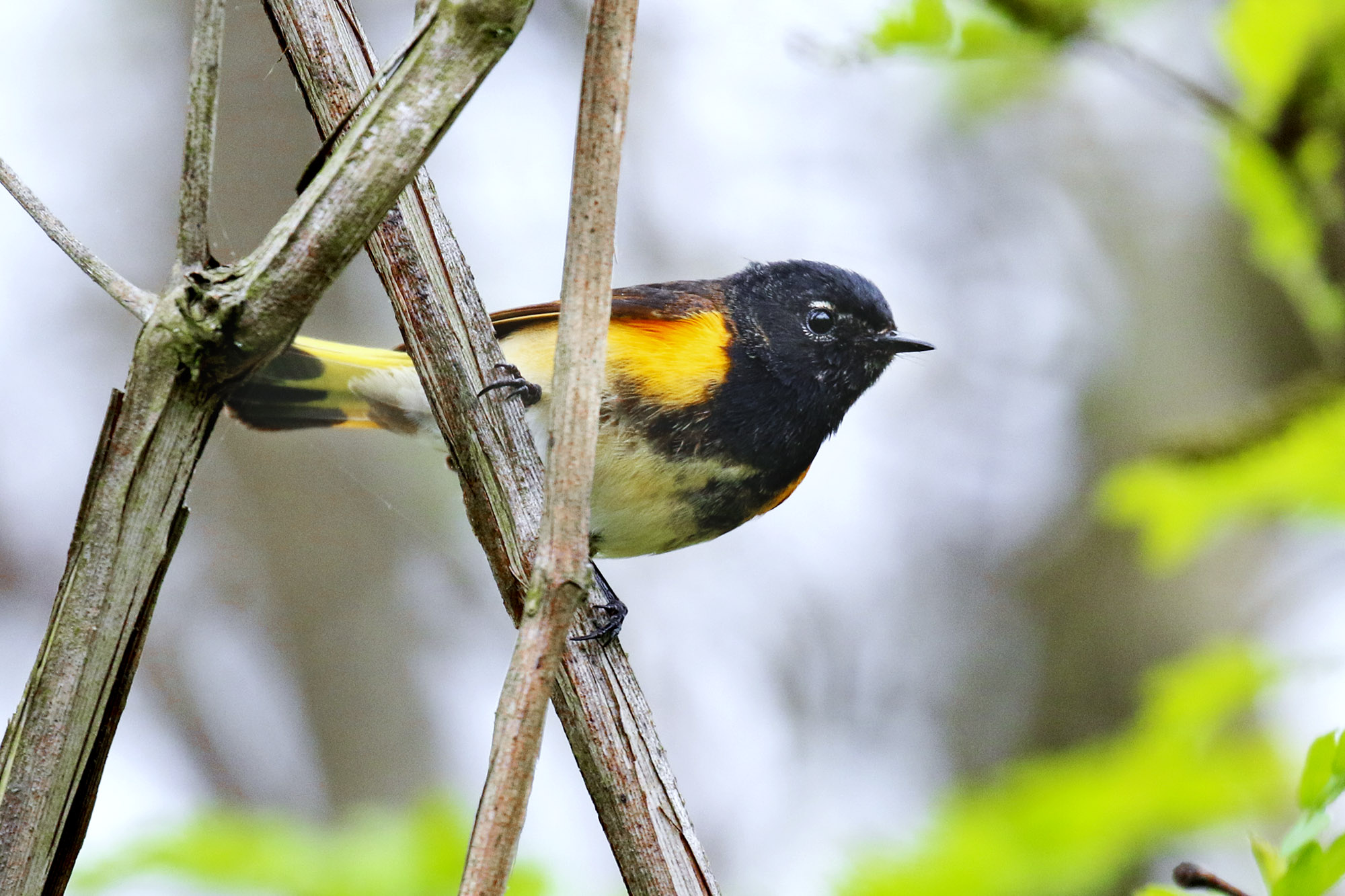 American redstart. “They are one of our most common warblers during migration,” Carr said. Photographed by Carr in Winchester.

“I call it my ‘magic camera,’” he said. “Suddenly I started getting amazing shots – for me. I’m still a novice, but I love taking pictures with that camera.”

Q. How can we attract more birds to our yards?

A. By landscaping with native plants. Birds need cover and food. Put in some evergreens – conifers, cedars – to provide year-round cover and density. Native plants also provide birds with berries, seeds and fruits. Insects are attracted to these plants, and birds eat the insects and feed them to their babies. Some good plants are serviceberry, spicebush and American hollies, all providing fruit in the summer and fall. Oaks are good trees to have; they attract many species of caterpillars, which birds eat.

A. Black oil sunflower seeds will attract a wide range of species, such as cardinals, tufted titmice, jays and finches. And get a thistle feeder to attract goldfinches and pine siskins. Set up a suet feeder on a tree to attract woodpeckers. And get a hummingbird feeder for use in the summer. Just use sugar water, without dye, and enjoy visits from these amazing tiny birds that migrate to our area from Mexico – across the Gulf of Mexico – and back.

Q. Does feeding harm birds in any way?

A. Most studies show that there is no harm. Feeding does not appear to affect behavior much, or migration timing. Birds are flexible and good at moving from food source to food source, so if you don’t feed them for a while, they will move to other feeders. They likely visit several feeders throughout your neighborhood, and they still find plenty of food on their own – the insects, seeds, nuts and fruits of fields and forests.

Feeders can be a source for infections though. Finches particularly can get conjunctivitis from dirty feeders, so it’s good to periodically clean your feeders with a weak bleach solution and thorough rinsing to cut down on disease transmission between birds. 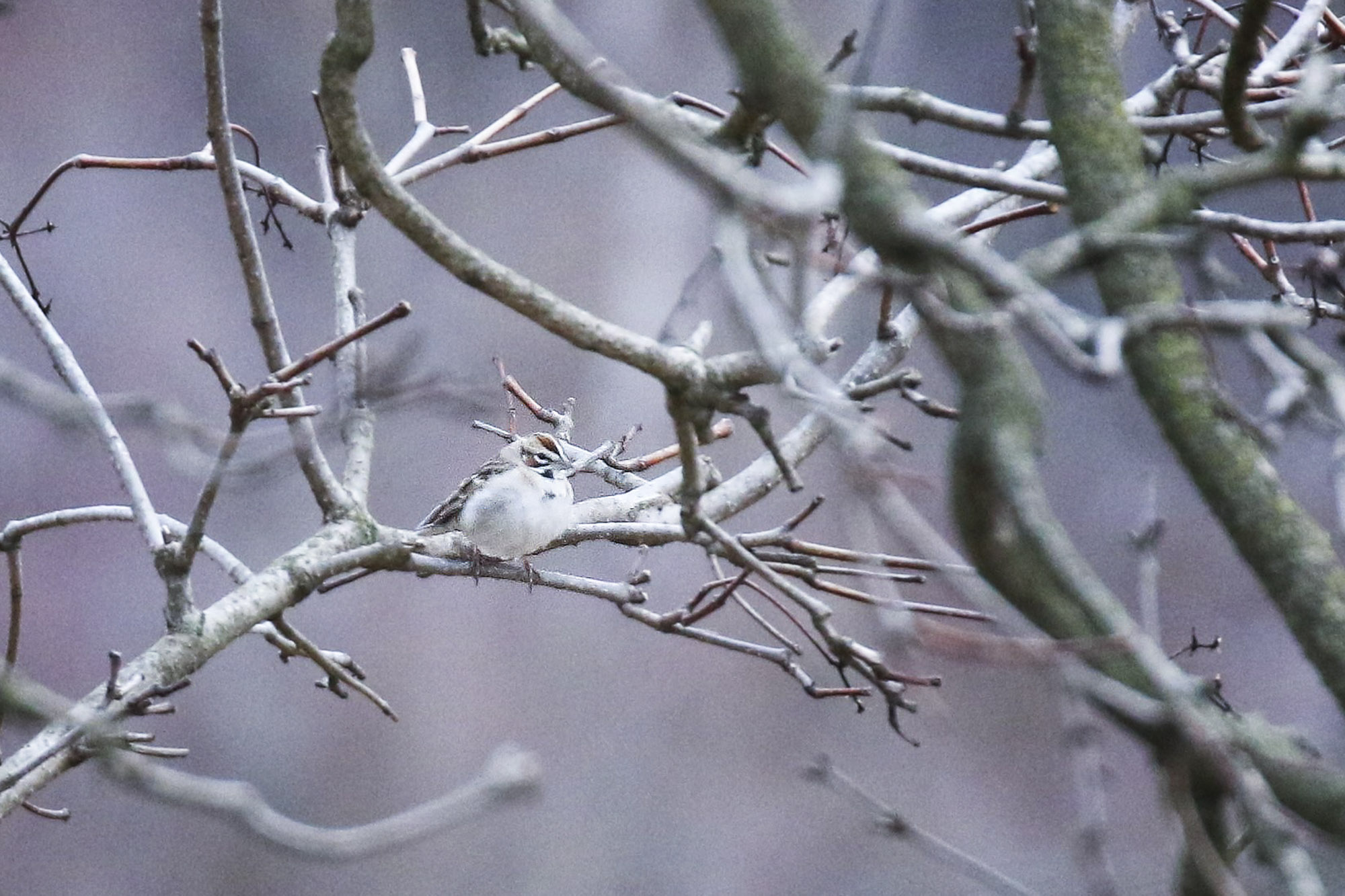 Lark sparrow. These birds normally range west of the Mississippi River. “This was the 214th species that I have seen at Blandy since I arrived in 1997,” Carr said. Photographed on Nov. 11, 2019.

Q. How can people get more involved with birding?

A. Almost every community has a local bird club or Audubon Society chapter. These groups organize bird walks, classes and other activities, such as Christmas bird counts to help assess bird populations locally and beyond.

There also are some great phone apps for bird identification and information, and some good books on the subject. I think the “Peterson Field Guide to Birds of North America” is an excellent choice for beginners; it’s an easy-to-use introduction to birding.

Q. How are birds important to ecosystems and to people?

A. Wild birds perform a host of ecosystem functions wherever they occur. Most of our songbirds feed on insects, at least during the breeding season, and their consumption of billions of defoliating insects acts as significant control in our forests and in agricultural systems. 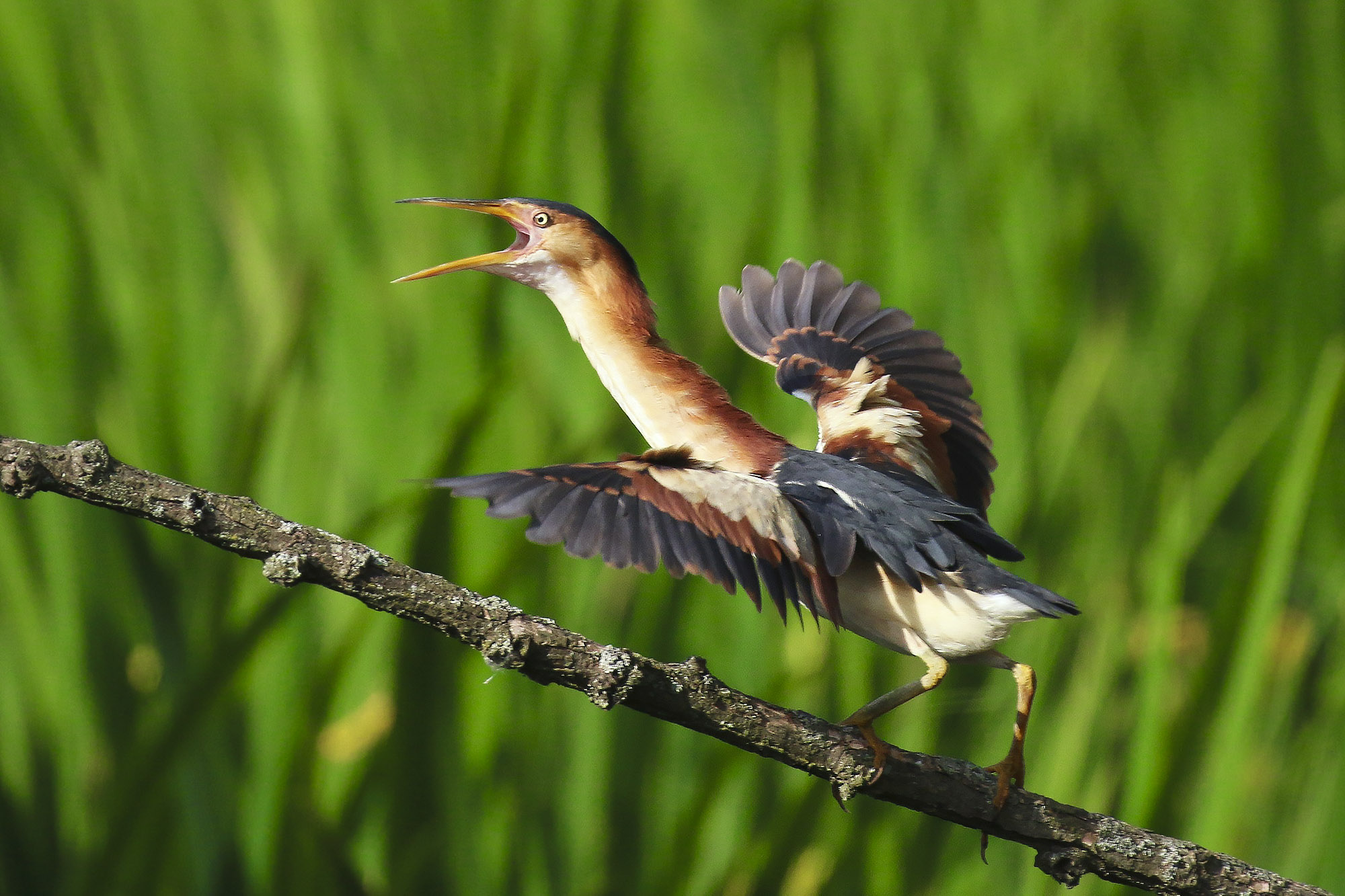 Least bittern, a marsh bird that breeds along the mid-Atlantic Coast. “I detected this bird by its call without seeing the bird, and lucked into this photo the next day,” Carr said. Photographed at Blandy.

Birds also tell us a great deal about the health of our ecosystems. Because of their high mobility and migratory behavior, they can tell us about changes in habitat quality throughout the hemisphere. They respond rapidly to climate change, and monitoring bird distributions can be an early warning signal of changes that will impact human populations.

Setting aside that utilitarian perspective, birds have inspired humans probably for as long as humans have been around. We have envied and admired their grace and beauty, their ability to fly, and their songs, and we have incorporated them into our own culture for many thousands of years. Even in our fast-paced, modern society, birds have often been the strongest link between people and the natural environment, and the more we learn about them, the more we are amazed. 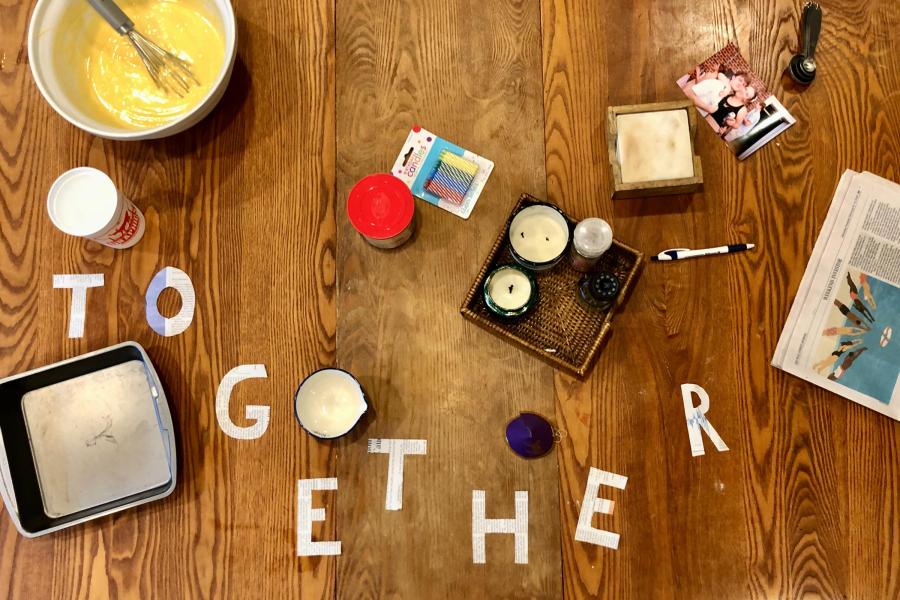 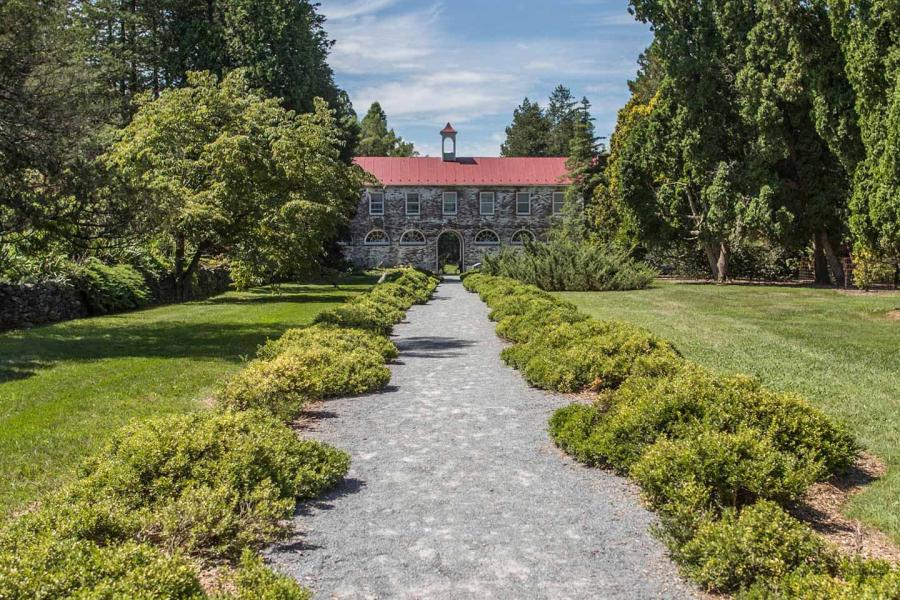 Doing Science, Down on the Farm 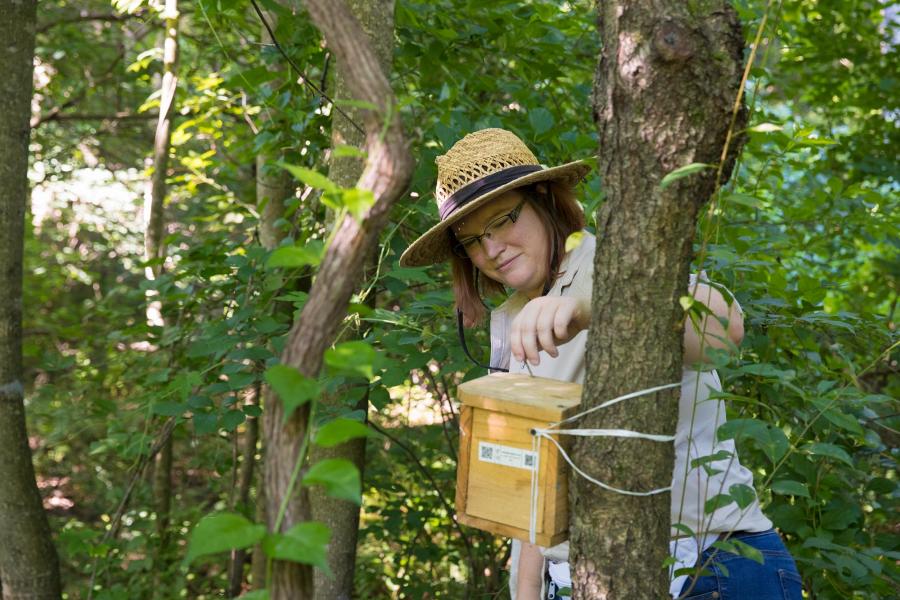