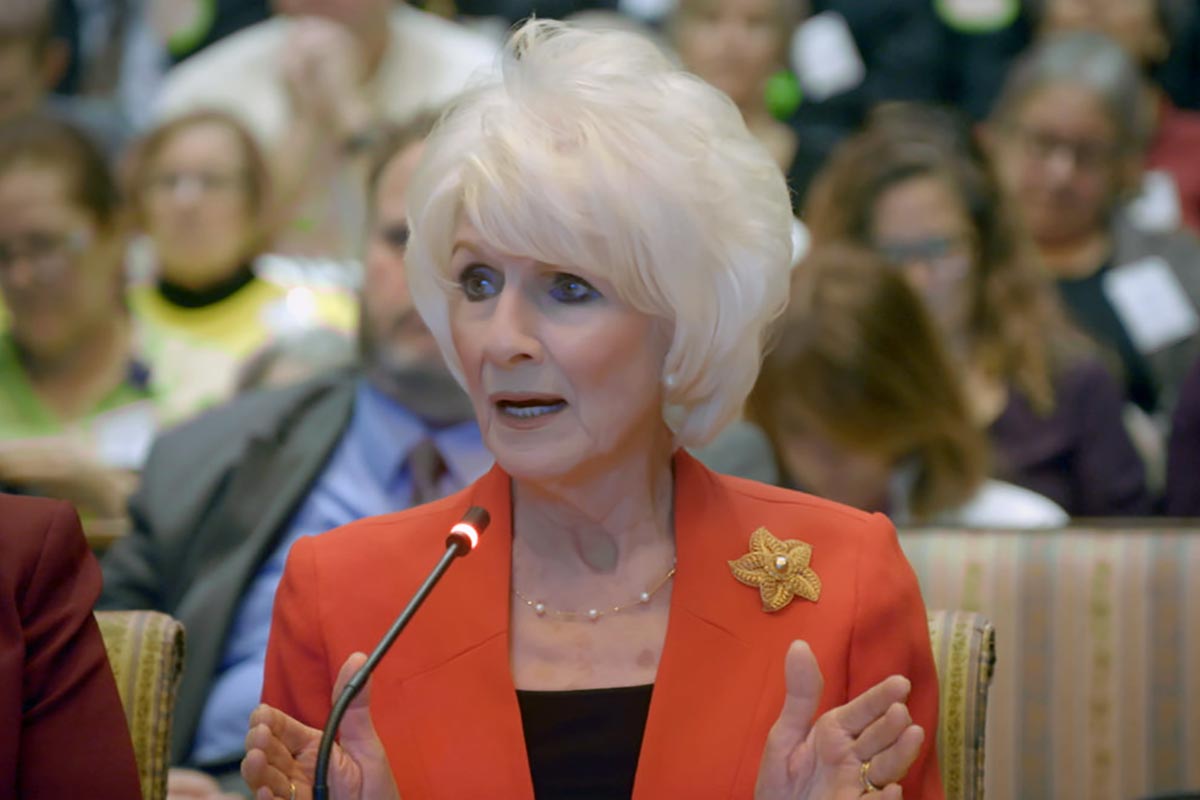 After nearly half a century working in radio, journalist Diane Rehm has pretty much covered it all, from interviews with presidents to conversations about a speech disorder that nearly ended her career. However, a new film captures her most personal topic yet – the 2014 death of her husband, John, and his fight for medical aid in dying.

The film, “When My Time Comes,” will be screened on Thursday at 7 p.m. at Charlottesville’s Paramount Theater. The event is hosted by the Virginia Film Festival, a program of the University of Virginia. Afterward, Rehm, who wrote a book of the same name, will discuss the film with its director, Joe Fab. (Tickets are available here.)

Rehm, who now hosts a weekly podcast called “On My Mind,” began working with National Public Radio in 1973 and became the host of “The Diane Rehm Show” in 1984, building one of the most powerful and wide-reaching programs in public radio. She won a Personal Peabody Award in 2010, considered among the most selective prizes in electronic media; was awarded the National Humanities Medal in 2014, presented by President Barack Obama; and has received many other honors over her decades-long career.

She was married to John Rehm for 54 years, and in the film discusses the painful end to his long battle with Parkinson’s disease and his desire for “medical aid in dying,” a process that allows terminally ill, mentally capable adults whom doctors believe have six months or less to live to request a medication that will help them die in their sleep. It is currently permitted in nine U.S. states and the District of Columbia.

John Rehm lived in Maryland, which does not allow medical aid in dying, and he chose to stop eating, drinking and taking medication, seeing that as the only means available to him to control his own death. He died in 2014. Diane Rehm discusses that experience in the film and interviews other patients, their families and advocates both for and against the “right to die” movement in the U.S.

We spoke with her before the screening to hear more about what she learned, and what she hopes viewers will take away from the film.

Q. Why did you want to explore this topic in writing and film?

A. I tended to my husband for many years, until he needed to be moved to assisted living. He was there for a year and half. He told me, our children and his doctors that he felt he had lost all dignity. He could not use his hands, he could not stand on his own, or clean himself. He needed help to put a fork to his mouth. It was so very sad.

My daughter, who is a physician, told him we could keep him comfortable, but he said he did not want comfort. He was ready to die. Maryland did not, and does not, have medical aid in dying, and his doctor told him the only thing he could do was to stop eating, drinking water and taking medication.

I came in the next day, and honestly he looked wonderful; it was shocking. He told me that he had begun that process, and that he truly was ready. He was conscious and happy for the next 2½ days. And then he fell asleep and never woke up.

The 10 days or so before he decided to do that were sheer agony [because he had deteriorated so much]. I was so saddened and angry that he had to suffer when, had he lived in Oregon, he could have gone peacefully in his own time, with all of us there. It was very hard, and that is how I got involved in the discussion around medical aid in dying.

A few years after John died, Joe Fabb called me and said he was doing a film on the right to die. We spoke about his ideas, and he wanted me to be the narrator of the film. I agreed to do it, and I am so glad I did. The whole team did a wonderful job on the film.

Q. What did you learn from the conversations you had for the film?

A. I learned how strongly people felt about their right to die at the time of their own choosing, once they knew that their illness was terminal. I talked to one woman who was only 37 years old, with breast cancer that had spread all over her body. She said she did not want her 13-year-old to see her suffer.

On the other hand, I spoke to an African American pastor here in Washington [D.C.] who questioned how African Americans could trust the medical community, when they have historically been forced into experiments like the Tuskegee experiment or not enjoyed good care from doctors. If you could assure me that all care would be fair and honest, he said, I would support [medical aid in dying]. But the way things are now, he simply could not, and I understood that.

I also spoke to a Roman Catholic priest, who helped me understand his strong faith that God should be the only decider. I support that, if that is what you believe. I also support you if you decide that you want absolutely every treatment that medical science can provide, until the very end. If that is your wish, it is your choice. And it is my choice to have medical aid in dying, which I hope you will understand.

Q. What do you hope people take away from the film?

A. A desire to talk with their family, their friends and their doctors about what they want at the end of life. People do not talk about this enough. It is taboo, as though it is the last thing that anyone wants to talk about, when it is something we will all face. If our film and my book can help persuade people to just start talking about it, that would be a goal achieved, no matter what they decide.

Q. How has writing and reporting on this topic helped you make sense of it?

A. It is such an important conversation, and one that came up several times when I did my daily show for 37 years. We talked about medical aid in dying on the show, and John and I used to talk an awful lot about what we wanted at the end of life. On the show, it seemed important to have all sides represented and to talk about it openly. People often wrote to me after one of those segments, thanking me for having that kind of discussion and saying it spurred their own family to have a conversation.

Q. What role do universities like UVA have to play in this conversation?

A. UVA is a wonderful school, and universities are filled with thoughtful people who have many different views. I hope they can begin to discuss those views, and all of the doubts, questions and feelings that are represented in the film.

I hope young people, especially, will have those conversations. They are the ones who will move us forward.

Meet the New Cavalier on Horseback: She’s Eager To ‘Carry On a Legacy’ END_OF_DOCUMENT_TOKEN_TO_BE_REPLACED

Monkeypox Is Spreading, But University’s Risk Believed To Be Low END_OF_DOCUMENT_TOKEN_TO_BE_REPLACED

Virginia Football – For All Virginia END_OF_DOCUMENT_TOKEN_TO_BE_REPLACED