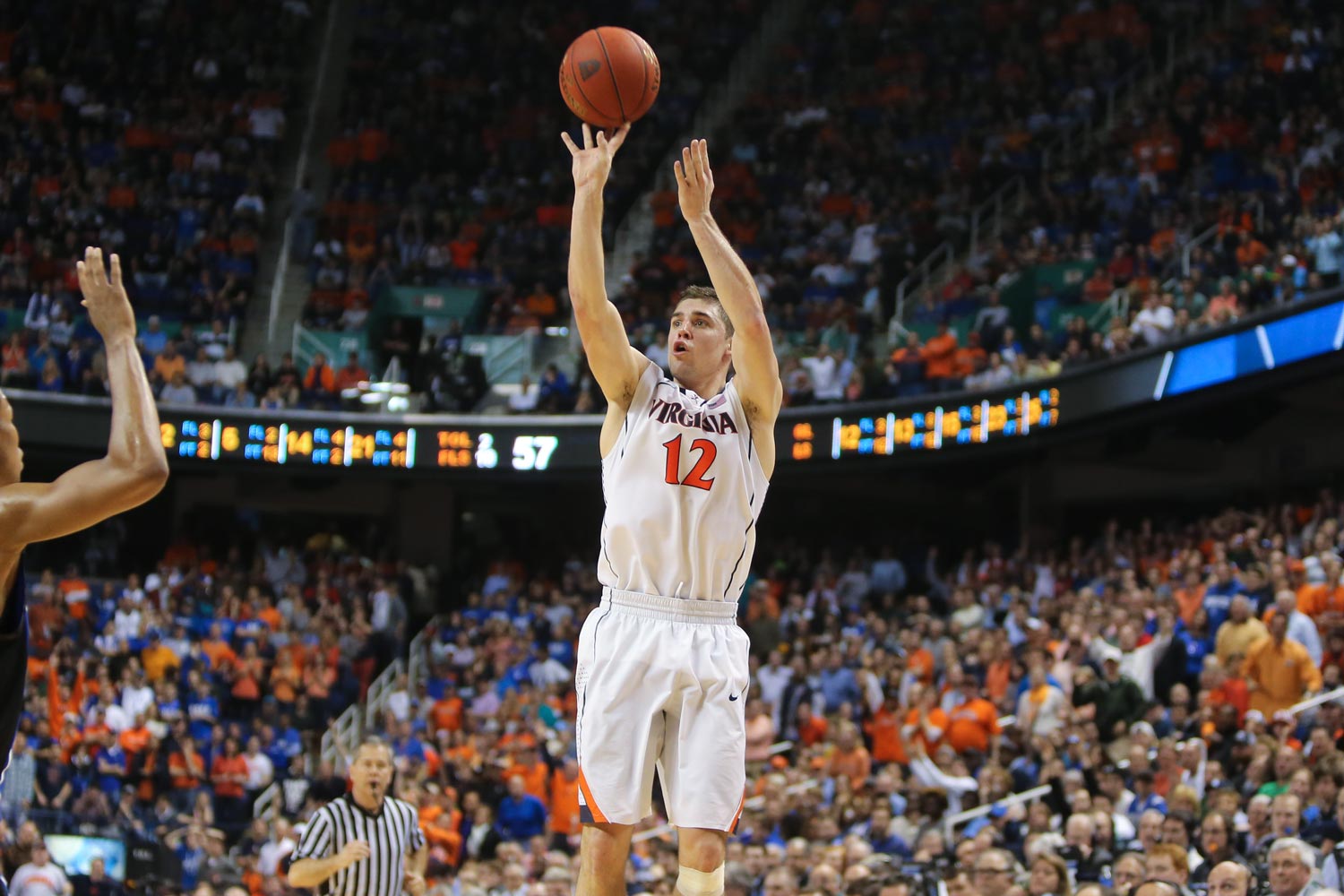 “Scrap heap” is the not-so-nice term used in professional sports to describe the predicament former University of Virginia basketball star Joe Harris found himself in two years ago.

Within a one-week span in January 2016, the NBA player was injured, traded and released.

At that point, Harris – who had been a second-round draft pick of the Cleveland Cavaliers in 2014 – wasn’t exactly a hot commodity.

But six months later, the Brooklyn Nets took a chance on the former ’Hoo.

Now, they’re reaping the rewards. Harris, who will be an unrestricted free agent this summer, is averaging career-highs in points (10.1), rebounds (3.2) and assists (1.4).

Having led Virginia to its first ACC championship in 38 years as a senior in 2014, Harris – also a member of UVA Coach Tony Bennett’s first recruiting class – holds a special place in the hearts of Cavalier basketball fans.

On Wednesday, UVA Today caught up with “Joey Hoops,” who is enjoying life in the Big Apple.

Q. This is clearly the best stretch of your career right now. What’s been clicking?

A. I think it’s just the fact that I have a year of experience playing here in Brooklyn in Coach [Kenny] Atkinson’s system. I feel more comfortable. Knowing your role and what is expected of you gives you a lot of confidence to go out and play aggressively. You’re not really thinking; you’re just going out and playing. That’s the best way to play basketball.

Q. There was a New York Post article in which Coach Atkinson said his first impression of you was as “a shot-faking fool.” What did he mean by that?

A. Basically he was referring to the fact that I wasn’t aggressive enough when I first started playing. He would pull me from the game if I wasn’t shooting the ball. He wanted me to be super-aggressive and hunting shots, and I wasn’t taking the shots. Now that’s changed.

Q. Whenever you score during home games at the Barclays Center, they play music from “The Godfather.” What’s that all about? Does it have anything to do with the “Joey Hoops” moniker you picked up during your UVA days?

A. The funny thing is there’s really no good story behind it. They asked everybody on the team what they wanted played and I couldn’t think of anything. But then I remembered when I was in Cleveland, Mo Williams used to play “The Godfather,” which I thought was pretty sweet. He had just retired, too, so I figured he wouldn’t mind.

Q. Deadspin recently ran a piece that made you seem like a man about town. How did that all come about?

A. Our PR department with the Nets knew that I liked to get out and about in the neighborhood and liked to eat my way around Brooklyn. So they set up an interview with a local news outlet in my neighborhood. The French restaurant I went to was like a block away from my apartment. It was pretty funny because it ended up making me look like I was this Brooklyn hipster (laughing). I’m definitely not cool enough to be a hipster.

Q. You come from such a small town (Chelan, Washington) and now live in a huge city. What’s that transition been like?

A. At first, it was overwhelming, for sure. New York is a city like no other. There’s so much stuff going on and so many people, but I’ve really started enjoying it.

I really like living here. It’s fun. Just the convenience of everything – being able to walk everywhere. I think the fact that I’m a bit of a foodie has really helped my transition. There are so many good restaurants here.

And what’s cool, too, is that there are a lot of people from UVA who I went to school with who are working here. When I was in Cleveland, there weren’t a lot of UVA graduates hurrying to get to Cleveland, Ohio (chuckle). These last two years have been great in terms of getting to see a lot of the friends I made while I was at Virginia.

And the fact that my girlfriend, who I met at UVA (Ina Browning), works here has made it better all the way around.

Q. Do you still keep in touch with all the UVA alums in the NBA (Mike Scott, Malcolm Brogdon, Justin Anderson and London Perrantes)?

A. We keep tabs, for sure. And whenever we go into each other’s cities, we always meet up for dinner and hang out. The bond we have is never going to go away. We’ll always be boys and have those UVA memories.

Mike’s been playing awesome! He’s healthy now and getting a good opportunity in Washington. I’m really happy for him.

Q. What do you make of the current team’s success?

A. They’ve been playing great. Beating Syracuse [on Tuesday] was a great win. It was funny because right before my [Nets] game on Saturday, [former North Carolina star and current Brooklyn Nets teammate] Tyler Zeller and I were watching the UVA-Carolina game.

A. (Laughing) Oh, of course! I was talking trash during the game. We were sitting in the lounge of our locker room watching it during the pregame meal.

Q. What do you miss most about UVA and living in Charlottesville?

A. I really miss Charlottesville a lot. I miss the people. I miss the fans. I miss Coach Bennett and his staff. It’s a really special place. What they have going on – that does not happen everywhere.

People really shouldn’t take it for granted. They should be appreciative of what Coach Bennett and his staff have been able to do and the kids they continue to bring in. I don’t think that gets mentioned enough.

When I met a lot of the guys over Thanksgiving [when UVA played in a tournament in Brooklyn], it was just the same crop of guys as when I was in school. Everybody has really high character and is about the right stuff, and I think that’s what’s important.

Q. How has UVA prepared you for post-college life?

A. It goes back to the people. There are so many people who I have met who I wouldn’t have otherwise. There’s something about going to school at UVA that you probably wouldn’t understand unless you had gone there.

I get the sense that most of my [Nets] teammates don’t have the same kind of attachment to their schools as I do to UVA. I feel like our UVA team, we were all playing basketball, but we were also very ingrained in the student community. That’s what made it so much fun. When we started doing well, people weren’t looking at us like we were these big guys on campus. You’re just normal guys, hanging out, being a part of all the different things going on that the University community has to offer.

Here Is What You Need to Know About the New Coronavirus Variant, Omicron END_OF_DOCUMENT_TOKEN_TO_BE_REPLACED

Fall Is in the Air on Grounds END_OF_DOCUMENT_TOKEN_TO_BE_REPLACED

Meet the Cats and Dogs Your CVC Donation Supports END_OF_DOCUMENT_TOKEN_TO_BE_REPLACED