Q&A: Local Teachers Explain Why They Went to D.C. and Built a LEGO Rotunda 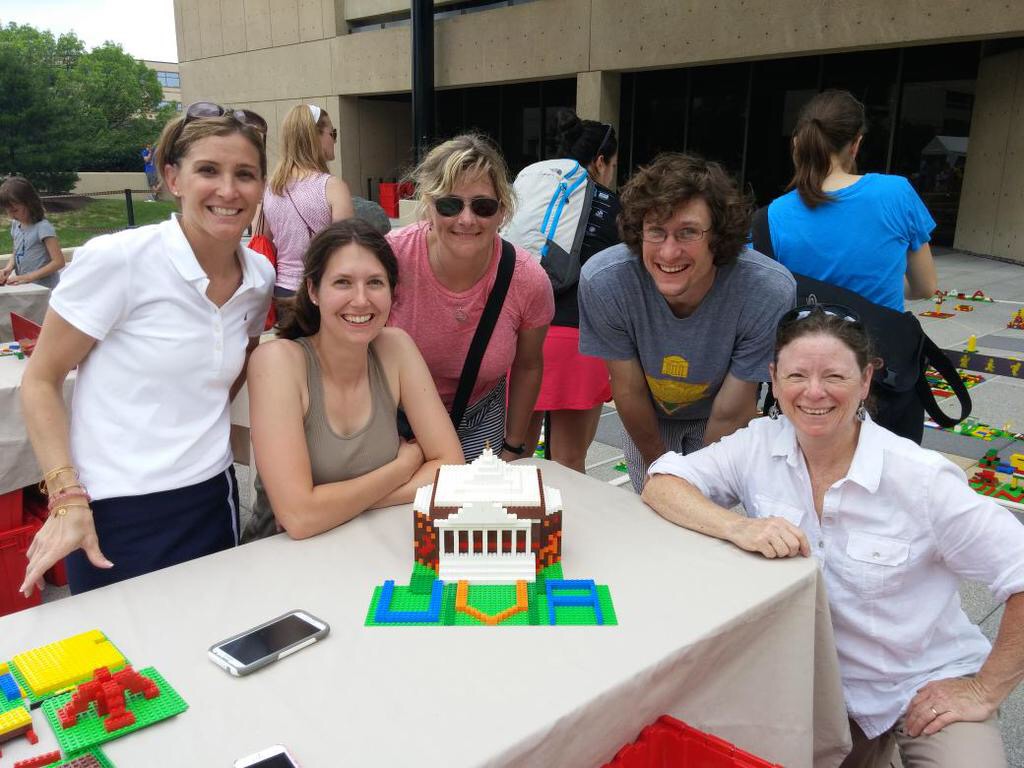 While there, the teachers attended sessions and conversations, made their own presentations – and built a replica of the Rotunda out of LEGOs.

UVA Today spoke with Stephanie Passman, a teacher in the Albemarle County Public Schools and participant in the Week of Making, to learn more about their LEGO creation.

Q. What is the National Week of Making?

A. The “Week of Making” is a celebration of being producers instead of consumers. It is a call to tinker, create, experiment, design, invent and think. It is what we try to bring to our students in Albemarle County every day: the ability to actively create something new instead of passively absorbing information.

Q. How were LEGOs integrated into the fairs?

A. At the National Maker Faire, the LEGO exhibit was a large-scale outline of the United States and participants could build anything to put anywhere. The exhibit was a great example of the maker-infused curriculum that we have focused on in Albemarle for a few years and is now gaining traction within government agencies, higher education institutions and other school divisions around the country.

Q. What is the importance of a maker-infused curriculum?

A. When the learner/creator is in charge, there is personal investment in and ownership of what has been created and learned. My students at Stony Point Elementary tinker, invent, create and subsequently learn in much the same way, as we have intentionally incorporated the maker approach into our school district’s culture.

Q. How did you decide what to build?

A. We immediately felt called to build the Rotunda, as any good Wahoos would be. No one told us to build a Rotunda, or how to build it, but we wanted to figure it out because the Rotunda was meaningful to us.

A. Many of the ACPS educators involved in the Week of Making events are also University of Virginia alums, including teachers Eric Bredder and myself, Superintendent Pam Moran and Director of Instructional Programs Chad Ratliff. We’re even [represented] on the government side – Stephanie Santoso is the White House Senior Advisor for Making. We’re bleeding orange and blue all over the place!

Q. Did you build the Rotunda from memory?

A. As we built, we continually referenced a photo on a smartphone. One would think that such devoted U.Va. alums and Charlottesville residents would have an image of the Rotunda etched in our minds, but recent Rotunda renovations have blurred that memory a bit!

Q. Was it difficult to build?

A. It was challenging to decide upon the correct proportions of the steps, columns, building and dome. We regularly iterated our product and thought through the math before feeling content. We persisted without a set of trademarked LEGO Rotunda instructions because the work was fun and relevant for us.

Q. How long did it take to build?

A. Much like the construction of the actual Rotunda in 1822, our LEGO Rotunda took a long time to build and progress was impeded by a mix of rainstorms and suffocating D.C. heat. In all, we worked for about two hours over the course of two days.

Q. What did you learn from building the Rotunda?

A. We, as a group of adults, were fully engaged in building the Rotunda because it was something meaningful to us that we chose to create. The only resources we used were piles of LEGO bricks, a Google-searched image and the willing collaboration of our team of six. The experience taught me that I must open up similar experiences for my own students at Stony Point Elementary School in Albemarle County. Give them resources to explore their passions and create, and then get out of the way.

Q. What makes LEGO building different from the usual classroom arts and crafts?

A. This type of making naturally requires problem-solving and critical thinking, which is why we are so intent on providing similar experiences to our students in Albemarle County.

It’s Copperhead Season in Virginia. Here Is What You Need to Know END_OF_DOCUMENT_TOKEN_TO_BE_REPLACED

What’s Next for UVA’s Class of 2022? END_OF_DOCUMENT_TOKEN_TO_BE_REPLACED